Lauryl Jensen has always loved teaching. After receiving her undergraduate degree in secondary education from Brigham Young University-Idaho, she taught junior high for a few years before starting her family. 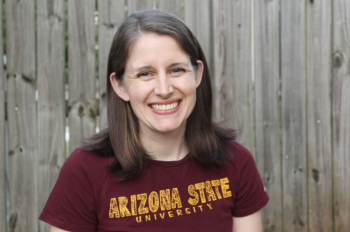 Lauryl Jensen will be graduating with her master’s degree in history. Photo courtesy of Lauryl Jensen. Download Full Image

“It is the most rewarding thing for me to participate in moments that broaden someone else’s understanding and in turn broaden my own,” said Jensen.

Ten years and four children later, Jensen decided to take the next step in achieving her dream of teaching online courses for her alma mater. She wants to work for BYU Pathway and help them in their efforts to make higher education more accessible to people.

“A master’s degree was an essential step in that process,” said Jensen. “Specifically earning my master’s degree online has given me valuable insight into the experience that my own future students will have.”

She will be graduating with her master’s degree in history from the School of Historical, Philosophical and Religious Studies. The school caught up with her to ask her about her time at Arizona State University.

Answer: I toyed with the idea of several different master’s degrees before settling on history. I was looking into education first, but in counseling with several mentors and exploring the options at ASU, history felt right. I started looking into class possibilities and got excited to learn rather than just get a degree.

A: While training to be a historian, I had my perspective enhanced in a wide variety of ways. The one that has stuck with me the most has been the conversation that surrounds the idea of bias. We all have our own perspective that we truly can not get outside of. This is not necessarily bad, but it is definitely something that we need to acknowledge and address as we form opinions about the world around us. It also makes a huge difference when we try to see the perspective of others.

A: While I was researching online programs, ASU kept coming up as No. 1 for innovation and accessibility. The online program had a fabulous reputation and it has not disappointed.

A: Dr. Matthew Casey has been an invaluable mentor for me. Not only did he help to guide me while taking classes at ASU, his example as a professor who truly wants his students to succeed is one that I will take with me into my own teaching career.

A: Aside from the common "You can do it!" — which you can — I would also add to make a schedule for schoolwork. Plan it out and commit it to paper. That will help in taking charge of your studies and not feeling flustered cramming things in at the last minute.

A: I am applying for online teaching positions with BYU-Idaho. However, I am open to other opportunities to teach online. I will also continue to support my children and husband in their numerous adventures. I am so grateful for the opportunities we have.

A: I believe that the answer to many of the problems that face our world lies in the opportunity for further education. I would use that money to fund creative opportunities for making all forms of higher education available to a broader population. Degrees, certificates, training, education needs to be more accessible to allow success for more people.

Editor's note: This story is part of a series of profiles of notable spring 2020 graduates.Nathan Callahan started out as an engineering student at Arizona State University, but discovered the degree wasn’t for him. After a challenging first year, Callahan was gearing up to join the Navy, but when he received a New American University President’s Scholarship, he decided to change majors and ...

Nathan Callahan started out as an engineering student at Arizona State University, but discovered the degree wasn’t for him. After a challenging first year, Callahan was gearing up to join the Navy, but when he received a New American University President’s Scholarship, he decided to change majors and take advantage of the opportunity to continue his education. 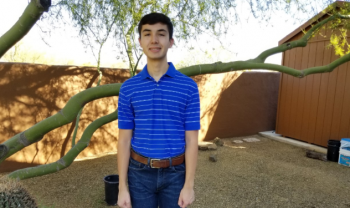 “I decided I would turn to the other subject that had always interested me and switched into the history program,” said Callahan.

He found his stride as a history major and added a certificate in political history and leadership to his coursework.

In December, Callahan was awarded an internship at the Goldwater Institute in downtown Phoenix, where he worked with the communications department to help promote legislative initiatives and litigation cases.

Callahan is graduating this semester from the School of Historical, Philosophical and Religious Studies, and we caught up with him to ask him about his time at ASU.

Answer: My "aha" moment didn't come until after my first semester as a sophomore. I had switched into history over the summer and wasn't 100% sure how I was going to like studying it in college versus studying it in high school. After having done reasonably well in my toughest course that semester, HST 321 taught by Dr. T.J. Davis, and quite frankly, really well everywhere else, I knew that I'd made a good choice.

A: As far as a class that changed my perspective/surprised me, I would be remiss to not mention AIS 280 taught by Dr. James Riding In in American Indian Studies. Learning about the often tragic history and consequences of major Native American court cases was a bit depressing as one might imagine, but it certainly was a class that was worth my while. It was a major blind spot in my understanding of American history as a whole.

A: While I would imagine it would be easier if I was gung ho about the school's pride or a particular strength, the reality is that it represented the best dollar-for-dollar value I could get as far as college goes. Considering where I ended up with my degree, going out of state — and its associated costs — would've been a terrible mistake!

A: My most important lesson would have to be from Dr. Donald Critchlow and his lessons on "principled pragmatism." I learned it in a historical context, how politicians had to compromise on ideology and ideals in order to forward ideas that they had to deem more important, but I believe that this is important in life. Some things are not to be compromised on, but it's inevitable that compromises will occur, so make sure they are anchored to larger and more important ideas.

A: It's cliche but, for many people, college will be about failure and not success. I feel that many people don't know how to handle catastrophic failure when they get to college, having performed so well prior to college, and so minor mistakes can snowball into major failures. If or when the time comes, accepting failure, adapting and then creating a new plan for success will be the only way forward.

A: In terms of my favorite spots, Noble Library — where I used to work — was always nice. I always used to see a lot of friends there and the book collection was really well put together — now gone unfortunately. If you do end up going there, be prepared to wait in line for a really long time at Starbucks.

A: My long-term goal is to commission as an officer in the U.S. Marine Corps. To further this, I enlisted in the Marine Reserves in late-March to help prepare myself mentally and physically. It's been my desire to serve in the military for a very long time and so it's exciting to finally take a concrete step towards service in the military.