Julia Manacher, a second-year student at the Sandra Day O’Connor College of Law at Arizona State University and aspiring immigration lawyer, has been selected as a Next Generation Leader by the American Constitution Society (ACS).

Manacher is one of just 26 students to be selected from the progressive legal organization’s nearly 200 chapters nationwide. 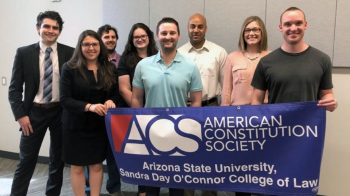 “Students who have demonstrated commitment to ACS engagement and strong leadership qualities are selected through a competitive application process,” said Meghan J. Paulas, senior director of chapters for the ACS. “Next Generation Leaders receive unique access to ACS career development resources and networking opportunities, and help to strengthen the future of ACS. We are delighted to recognize and celebrate Julia’s leadership.”

Manacher, who was the 1L representative for ASU Law’s ACS chapter and now serves as its president, said she was thrilled to find out she had been named a Next Generation Leader.

She was further honored when the ACS notified her that of the Next Generation Leader honorees, she was one of just four chosen to interview for a student board position on the organization’s National Board of Directors in June.

Associate Professor Joshua Sellers serves as the adviser for the ASU Law chapter. He wrote a letter of recommendation supporting Manacher’s application.

“Since she arrived at the law school, Julia has been a welcome addition to ACS and, in her current role as chapter president, has built connections with legal practitioners, educators, and activists, many of whom have participated in chapter events,” Sellers said. Julia Manacher, a second-year student at ASU Law and aspiring immigration lawyer, has been selected as a Next Generation Leader by the American Constitution Society.

For Manacher, a Connecticut native, her passion for immigration law and the route to ASU Law can be traced back to a school trip to the Galapagos Islands at age 14. That’s where she began to connect with Latin America.

“It was a really unique opportunity,” she said. “It was for biology, but what really started my journey was the connections I made with the communities I met.”

She attended undergrad at Lafayette College in Pennsylvania, where she double-majored in International Affairs and Latin American and Caribbean Studies and minored in Spanish, with stints studying in Peru and Argentina. She then worked at an immigration law firm for four years, before heading west to ASU Law.

“I knew I wanted to be an immigration lawyer, nothing else, and I knew that I wanted to be on the border,” she said. “When I finished my undergrad, I was really interested in doing immigration and asylum work along the border and even considered a position with the Florence Immigrant and Refugee Rights Project here in Arizona. I ended up taking a job instead back home with a business immigration firm in New York. But I never forgot wanting to work in Arizona, though. ASU Law was therefore my first choice for law school as it combined solid academics, the Immigration Clinic, and exposure to opportunities for externships and border work in which I had always really wanted to participate.”

In New York, Manacher was a founding member of an organization called Women to the Front that is involved in fundraising and advocacy for progressive causes. Upon arriving at ASU Law, she was looking to continue those efforts when she discovered the ACS.

“ACS seemed like the biggest and the broadest-tent organization where I could do that,” she said. “I saw all the events they were holding, and the topics were incredibly diverse. It seemed like the best opportunity to transfer my skills and interests in terms of organizations at ASU Law.”

Sellers says Manacher has poured herself into the organization, and played an instrumental role in landing the national ACS Student Convention, which will be hosted by the ASU Law chapter in 2021.

“She has displayed extraordinary leadership of the chapter, increased membership, and most impressively, spearheaded the effort to bring the 2021 ACS Student Convention to the law school,” he said. “I am proud of her achievement and am certain she will be an asset to ACS national.”

Manacher is looking forward to the opportunity to do more within the organization, and is thankful for all the help she has received in getting to this point.

“ACS has been one of my most rewarding experiences in law school, and I’m excited to be able to continue on with the organization in a meaningful capacity,” she said. “I appreciate everything ACS, Professor Sellers and ASU Law has done in helping me to get here.”

Six Sun Devil wrestlers were selected as All-Americans by the National Wrestling Coaches Association (NWCA), announced by the organization on Friday. ... Six Sun Devil wrestlers were selected as All-Americans by the National Wrestling Coaches Association (NWCA), announced by the organization on Friday.