The Arizona State University character-driven leadership program based in Washington, D.C., has found a new chieftain. 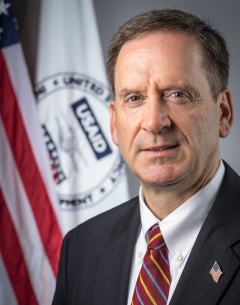 ASU President Michael M. Crow and board chair Cindy McCain announced Thursday that Ambassador Mark Green will serve as the new executive director of the McCain Institute for International Leadership at ASU’s Barrett and O’Connor Washington Center in the nation’s capital. Green starts his new position on April 20.

Green joins a long line of ambassadors at the McCain Institute, which is named for Arizona Sen. John McCain.

Green was the former administrator of the U.S. Agency for International Development (USAID) since August 2017. His other posts include heading the International Republican Institute, serving as ambassador to Tanzania from 2007 to 2009 and representing Wisconsin in the United States House of Representatives for four terms.

“Character-driven leadership, in America and around the world, has never been more important,” Green said. “At USAID, I helped strengthen our humanitarian and global development tools. At the McCain Institute, I’ll have an opportunity to reinforce the leadership needed to use these and other tools at a critical moment in our history.”

“Mark Green’s hallmark is inclusive, character-driven leadership that produces remarkable results,” said McCain, board chair of the institute. “I’ve known and admired him for a long time, and am so proud we now get to work with him directly as our executive director. I know my late husband would approve.”

Based in Washington, D.C., as part of ASU since 2012, the McCain Institute is a unique, action-oriented policy institution with major programs that advance character-driven leadership based on security, economic opportunity, freedom and human dignity.

Green holds a law degree from the University of Wisconsin Law School and a bachelor’s degree from the University of Wisconsin-Eau Claire. In 2012, he was awarded an honorary Doctor of Science from Georgetown University’s School of Nursing and Health Studies. Two years later, President Jakaya Kikwete of Tanzania presented him with a special Presidential Certificate of Recognition and Appreciation.

For Holland Woods, it is time to come home to finish his college career. ... For Holland Woods, it is time to come home to finish his college career.