Recipients are Tal Sneh of Boulder, Colorado, double majoring in biochemistry and physics; Alexis Hocken of Scottsdale, Arizona, majoring in chemical engineering with a minor in biochemistry; and Delondrae Carter of Baltimore, majoring in astrophysics. All three are enrolled in Barrett, the Honors College. 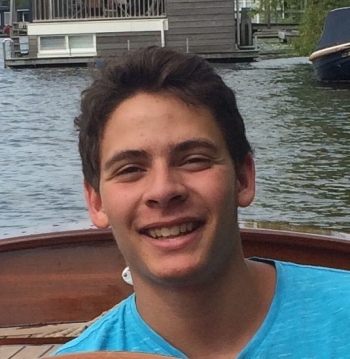 “The students selected as Goldwater Scholars are, without exaggeration, the absolute best STEM undergraduates in the United States,” said Kyle Mox, director of the Lorraine W. Frank Office of National Scholarships Advisement.

“There are a number of powerful uses for nanotechnology this cheap and reliable, one of them being digital diagnostics,” Sneh said. “My research captures targets of interest on these DNA origami platforms and amplifies them so that the signal can be read on fluorescence microscopes that cost only a few hundred dollars and, hopefully, can automate data acquisition. This project hopes to provide an extremely cheap but powerful tool in the diagnostic arsenal of resource poor settings.”

“Tal’s work in my lab has been highlighted by remarkable hard work, contagious passion for his projects, and independence,” said Rizal Hariadi, assistant professor in the department of physics and the Center for Molecular Design and Biomimetics at the Biodesign Institute. “Students like Tal come to the lab once in 10 years. Tal operates like an advanced postdoc. He is regularly given scientific and engineering challenges instead of a list of experiments. Some of the objectives are very audacious. In the last few months, Tal and I have been running a weekly brainstorming session every Tuesday afternoon. The weekly brainstorming session with Tal is always the highlight of my week.

"Tal is the co-first author of one of his two manuscripts. In my lab, Tal is working two projects, dealing with nanofabrication of a low-cost point of care diagnostic chip and development of  low cost single molecule nanoarrays.”

"I'm truly honored to have received the Goldwater Scholarship and hope it, along with the education I've received in and outside of the classroom at ASU, can propel me forward to a successful research career in nanomaterials,” Sneh said. 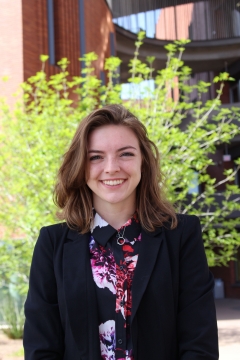 Hocken is a graduate of Desert Mountain High School in Scottsdale, Arizona.

She researches photocurable nanocomposites, which are composed of polymer and silica nanoparticles.

“These composites present a promising solution for creating customizable artificial cartilage replacements,” Hocken said. “By varying the concentration of the nanoparticles within the composite, we can alter the physical properties of the material, such as mechanical strength and flexibility. “

It is critical to have an acute understanding of the various properties as it will allow her to better predict the behavior of the material once implemented as a cartilage replacement. Hocken aims to analyze various types of nanoparticles that can be incorporated into the material to continue to increase the resolution and range of properties from which one can choose. Ultimately, she hopes to be able to 3D print a tailormade cartilage replacement for an individual patient.

“Alexis is one of those rare talents,” said Matthew Green, assistant professor of chemical engineering in ASU's Ira A. Fulton Schools of Engineering. “Her academic, research, and extracurricular achievements are superlative, and she is poised to make a profound impact as she continues to develop, learn and build a career in research.

"She is independent in the lab and is intellectually leading projects. Outside of academics, Alexis is actively involved in Engineers without Borders and the Society of Women Engineers. She is also a community assistant in her dormitory, serving as a liaison and point of contact for her fellow students; she has encouraged several to pursue research opportunities.”

"I am thrilled to represent ASU as a Goldwater Scholar,” Hocken said. “I am eager to use this opportunity to springboard into a PhD program, where I hope to continue making a meaningful impact in the field of bio-inspired materials. I know it will provide me with ample opportunity to succeed in my research endeavors for years to come." 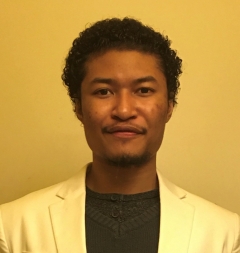 Carter attended Archbishop Curley High School in Baltimore. He hopes to pursue a PhD in theoretical astrophysics and then conduct research related to dark energy in a national lab and to inspire an astrophysical fascination in the next generation through science communication, like Neil deGrasse Tyson. Carter's particular interest is in brown dwarves.

Brown dwarves are objects that occupy the fine medium between the definitions of stars and planets.

“They are 15 to 75 times more massive than Jupiter, and akin to Jupiter, are essentially big balls of gaseous material,” Carter said. “But relative to the gas giants in our solar system, brown dwarves are hot, and unlike stars, they aren’t massive enough to undergo nuclear fusion in their cores. Because they don’t produce energy through nuclear fusion, they’re fainter than stars and cool over time — properties relevant to my summer research project at the Space Telescope Science Institute.”

“Rarely has an undergraduate student, with little experience to begin with, picked up on a project as fast as Delondrae,” said Rogier Windhorst, Regents and Foundation Professor in the School of Earth and Space Exploration. “He has an easy-going collaborative spirit and never hesitates to ask questions if something is not clear to him. We all fully enjoy working with Delondrae, who not only possesses a fearless enthusiasm towards solving new problems, but also managed to incorporate his additions to the project via GitHub in line with all of the existing code.

"Delondrae worked as a research assistant on the Hubble Space Telescope Cycle 27-29 Archival Legacy project 'SKYSURF.' He is providing the SKYSURF project significant help by setting up its vast amount of hardware and software for its enormous database (100 Tb). He is proficient in Intermediate Python, Linux and Latex.”

“I didn’t expect to get nominated, much less go on to win,” Carter said. “Winning a Goldwater has bolstered my confidence, and will open up many doors for me when applying for internships and graduate school. The monetary reward will also ease the financial burden on my father next year, who pays the remainder of my college expenses not covered by my New American University Scholarship.”

Five years ago in early April Bobby Hurley was named Arizona State's head men's basketball coach. Check out some of the fun that has happened since. ... Five years ago in early April Bobby Hurley was named Arizona State's head men's basketball coach. Check out some of the fun that has happened since.