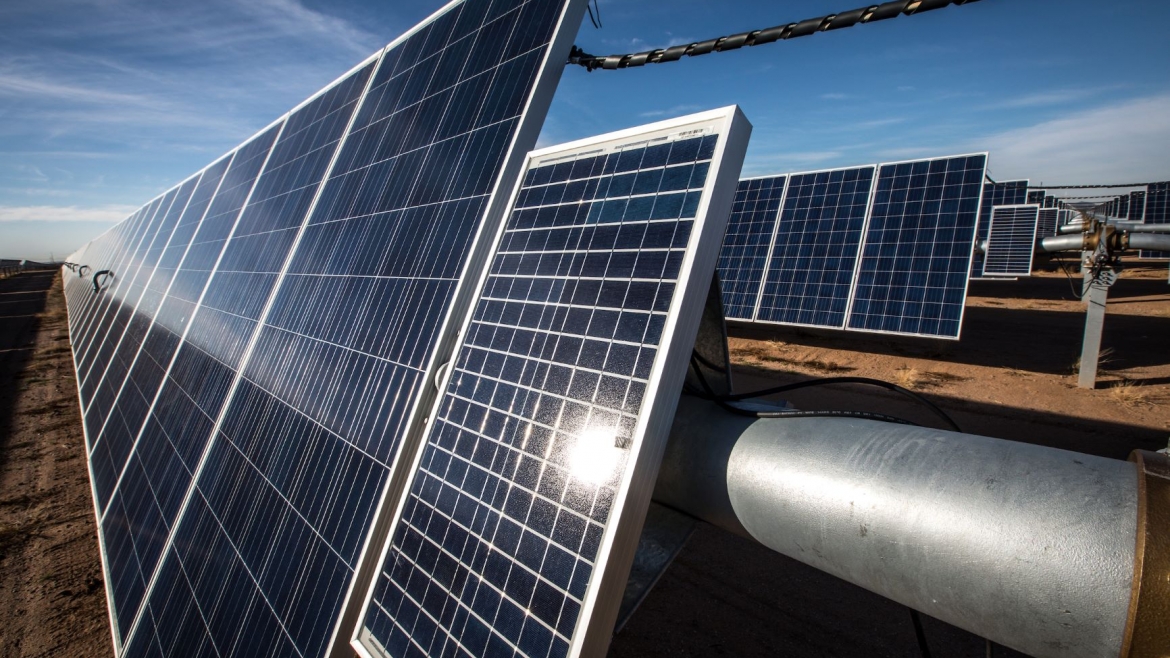 Advances like this are truly significant, energy history professor says

Late at night, a lone scientist in the lab smacks their forehead and — voila! — an amazing solution to a problem coalesces, right?

It usually doesn’t work like that: Science is incremental and collaborative. But, every once in a great while, a truly significant advance is made.

Arizona State University’s Zach Holman is part of two teams that have made amazing recent advances in solar cell efficiency.

Solar cells are vastly more efficient than they were 10 years ago. Cells on the market now — about 95% of the market — are 22% efficient. Physicists estimate the maximum theoretical efficiency for a single-material solar cell is 29.4%.

Holman and his collaborators have created two new cells of 26% and 27% efficiency. Their findings were both published in the past three weeks.

“Twenty-seven percent is an appreciable leap,” said Holman, an associate professor in the School of Electrical, Computer, and Energy Engineering. “This is in a many, many billions of dollars market. The companies that are operating in this space care about .05% efficiency. That’s dollars and cents for them.” 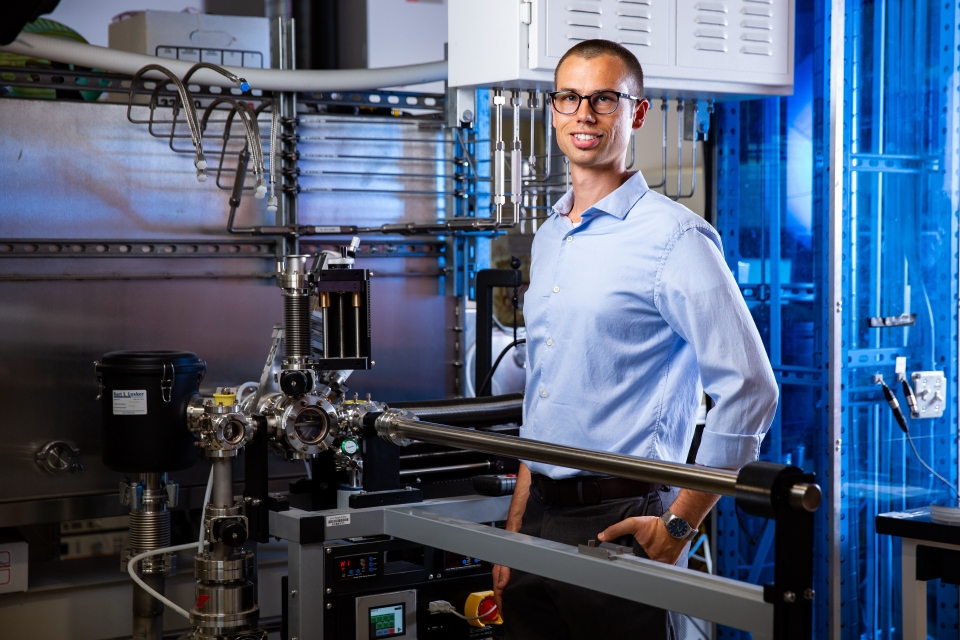 Last fall, Holman was in a solar cell plant in China. They make 1 million solar cells per day. “That’s one plant,” he said. “It’s an incredibly large technology market. ... The reason efficiency is so important is the total cost you would pay seems kind of expensive.”

The actual solar cell is 10%-20% of the total cost of installation. The rest of it is called the “balance of systems” cost.

What does consist of? There’s engineering. You have a chimney and different angles on a roof, so every project has to be engineered. You have to pay installers to climb on the roof. You have the hardware, which mounts the panels to your roof. You have the inverter that converts DC power to AC power. You have the certified electrician who does the grid connection. And of course you need a city permit.

“Basically we’ve learned to make modules cheaper a lot faster than we’ve learned how to install them cheaper,” Holman said. “Now the module is only a small fraction of the total price. A lot of those balance of systems costs scale with area. If you have to install twice as large an area, many of those costs go up. For example, the amount of time the installers have to take doing it, right? But if you make modules that are more efficient, you shrink the area needed to have a given power output.”

Efficiency reduces the number of panels needed, which in turn reduces all the balance of system costs.

“It’s not just about changing the cost of the module, because that’s only 10% to 20% of the total system costs," he said. "It’s by making this part more efficient, you can reduce some of the big 80%-90% chunk. That’s why we care about efficiency.”

Holman and his collaborators made alterations to existing industry standard panels. In other words, they made new parts for existing cars instead of building an entirely new type of car.

Silicon is the workhorse of solar panels. They paired it with an exotic material called perovskite.

“Perovskite can be paired with silicon,” Holman said. “So, instead of being a competitor, it can be a partner, and it can augment the efficiency and the performance in what we call one of these tandem cells, in which you stack the perovskite on top of the silicon. That’s the approach that I believe is most likely to bring this technology to market.”

Chris Jones is an associate professor of history in the School of Historical, Philosophical, and Religious Studies. He studies the history of energy transitions.

It’s achievements like this that drive advances, Jones said.

“I think you can argue that it is incorrect to argue that a brilliant scientist comes up with something no one has discovered and, presto, a new energy transition begins,” he said. 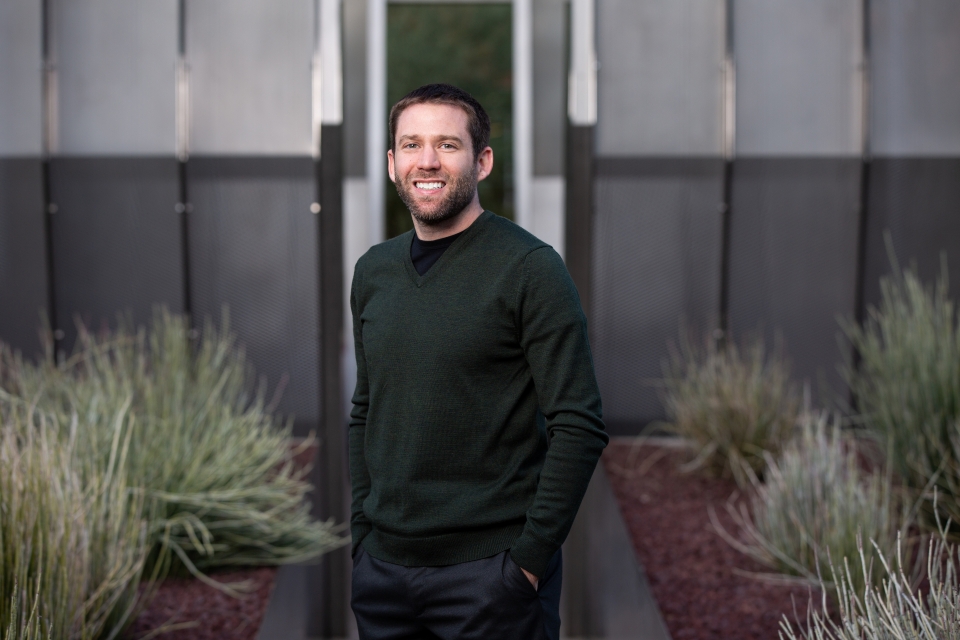 In reality, energy transitions are long and unfold over a long time. You can chart the improvement of energy improvements in refrigerators over time, for instance, or for internal combustion engines.

If you look at the history of light — from candles to whale oil to gas light to electric to CFL to LEDS — the cost has gone way down.

“When people think about the history of light they think of Edison,” Jones said. “But tungsten light comes later (1912). ... Any energy source depends not on a single innovation. Every industry needs to have breakthroughs like this or it falls behind.”

“In my group we like to try to work on problems that are larger than we can tackle with our skill set alone,” Holman said. “That means we both have quite a bit of diversity of people and expertise in the research group, then we also try to partner with other groups around the country and even around the world that have complementary skills but a similar vision as well.”

ASU has made smart choices and investments, and decided that solar matters, he said.

“I credit ASU with the foresight to make energy and solar a focus to bring here a critical mass of people, which then brings a critical mass of infrastructure and money,” he said. “At many universities you’ll find one faculty member who is doing research on solar cells. Here you have five to 10 who are just working on cell technology and a whole bunch more who are thinking about energy transitions and how you connect solar up to the grid and all that sort of thing. Because of that, we have facilities that are unique in this country for doing solar research. Without that, you couldn’t do any of the things you find in these articles.”

At Cronkite News, there are no daily TV broadcasts because of the response to COVID-19, but that didn’t stop students from reporting the news.On Tuesday, dozens of student journalists reported on stories including Election Day in Arizona, the impact of the novel coronavirus on voter turnout, and bills in the Senate to help ease the impact of the virus. Their work, via Zoom or their phones, was ...

At Cronkite NewsCronkite News is the news division of Arizona PBS. The daily news products are produced by the Walter Cronkite School of Journalism and Mass Communication at Arizona State University., there are no daily TV broadcasts because of the response to COVID-19, but that didn’t stop students from reporting the news.

On Tuesday, dozens of student journalists reported on stories including Election Day in Arizona, the impact of the novel coronavirus on voter turnout, and bills in the Senate to help ease the impact of the virus. Their work, via Zoom or their phones, was relayed through Cronkite News social media and digital channels that remain fully operational. 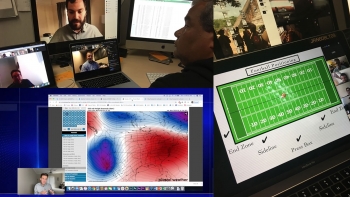 At ASU's Cronkite School, deans and IT staff monitor dozens of classes that have moved online, watching as professors and students discussed everything from TV news reporting to best practices for photographing football games. One student, Jordan Evans, even delivered the weather report from his home. Download Full Image

“We’re trying as much as we can to mimic what we normally do in Cronkite News and adjust to this new world,” said Cronkite News Executive Editor Christina Leonard.

Reporters and editors huddled, and editorial meetings outlined the day’s stories being reported — all via Zoom. Additional training helped prepare students for the new online-only approach. Sessions covered how to do a TV standup with an iPhone and a selfie stick, best practices for shooting video or doing standups on a smartphone, how to conduct effective interviews via Zoom and more.

Students this week are still covering Washington, D.C., and closer to home are working on pieces for “Arizona Horizon” on Arizona PBS.

Nearby in Room 450 at the Walter Cronkite School of Journalism and Mass Communication, deans and IT staff monitored dozens of classes that had moved online, watching as professors and students discussed everything from TV news reporting to best practices for photographing football games.