Editor's note: An earlier version of this article referenced a live screening of the film on the Tempe campus scheduled for spring 2020, which was postponed. The event, now virtual, has been rescheduled for Jan. 29, 2021.

"Making Sweet Tea" is a documentary film that chronicles the journey of Southern-born, black gay researcher and performer E. Patrick Johnson, as he travels home to North Carolina to come to terms with his past, and to Georgia, New Orleans and Washington, D.C., to reconnect with six black gay men he interviewed for the book, “Sweet Tea: Black Gay Men of the South — An Oral History.” 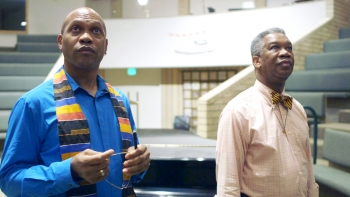 Johnson transformed that book into several staged plays over the course of a decade. The film combines documentary moments from the men’s lives a decade after the publication of the book and from Johnson’s life, depicting both how the men have changed and been changed by the book and play.

Here we talk to him about making the documentary and issues facing the LQBTQ+ community.

Question: What’s the meaning of the term “the tea,” and therefore the title for this documentary and your book “Sweet Tea: Black Gay Men of the South: An Oral History”?

Answer: “Tea” in black gay vernacular means “gossip.” In the book and in the film, the term takes on various meanings — from the literal drink that is a staple in Southern households, to gossip, to actual stories. In general, the term is a play on all of the meanings.

Q: Do you think that with the mainstream media, the expression “the tea” has lost its original meaning? Or has it helped to unify and expand LGBTQ+ culture outside of the community?

A: I think as with any term that comes from a subgroup, “the tea” has been co-opted by the mainstream. Part of the reason for that is because of popular shows like "RuPaul’s Drag Race." But the original meaning is still there in its mainstream usage; it’s just lost some of its queer reference. It’s hard to say whether it’s helped to bring more acceptance of LGBTQ+ people, but it certainly has helped to expand queer culture outside of the community. But there is a difference between acceptance and co-optation of another’s culture. It’s not always a good thing to have one’s culture being exploited while still remaining second-class citizens.

Q: In the film, you reconnect with six black gay men you interviewed for the book more than a decade ago. What has changed in these 10 years?

A: The world has changed tremendously since the original interviews, which I conducted between 2004–2006. Marriage equality had not happened. DOMADefense of Marriage Act. A United States federal law passed by the 104th United States Congress and signed into law by President Bill Clinton. It defined marriage for federal purposes as the union of one man and one woman. and "Don’t ask, don’t tellThe official United States policy on military service by gays, bisexuals and lesbians, instituted by the Clinton Administration on February 28, 1994. The policy prohibited military personnel from discriminating against or harassing closeted homosexual or bisexual service members or applicants, while barring openly gay, lesbian, or bisexual persons from military service." were still in place and a whole host of discriminatory laws. We also hadn’t had a black president. So, in many ways, the whole world changed over the decade since the first interviews. Many changes have been for the good, though there are still challenges that remain.

A: Unfortunately, some of the challenges for black LGBTQ+ people that were in place in 2002, such as employment and housing discrimination, racism and homophobia have not changed.

Q: Despite the cases of homophobia suffered by these men, they still decided to remain in the South. Why do you think that is?

A: Many of these men are tied to their families and their communities — communities in which they actually thrive. They also believe that moving to the North or West Coast would not necessarily make life any better for them.

Q: Religion has played an important role in U.S. history and has shaped the culture of the South. How big of an impact did religion have on these stories and your own story?

A: Religion is ingrained in the soil of the South. Everyone I interviewed was shaped by religion, whether they were still religious or not. How the men reconciled their religious upbringing with their sexuality ran the gamut. Some turned away from religion altogether, or at least the religion of their childhood. I interviewed Buddhists, Muslims, atheists, agnostics, and nonspecific spiritualists — all of whom were former or “recovering” Baptists, Methodists or Pentecostals. As for my own spiritual journey, I do not attend church, but the “church” is very much a part of me. I was raised Baptist and miss many of the rituals of the Baptist church. But I do not feel at home in traditional churches, so I practice the tenets of Christianity without the encumbrance of being a part of the institution of a church.

Q: What issues are specific or unique to the black LGBTQ+ community in the South?

A: I don’t know that the issues facing black LGBTQ+ folks are any different than those in other parts of the country. I think that religious oppression plays a bigger role in their lives in the South because the South, in general, is more religiously conservative. And, there is some evidence that HIV/AIDS disproportionately affects black LGBTQ+ communities in the South than other regions.

Q: There is still a lot to do in the LGBTQ+ community but in your experience, what more can be done to help LGBTQ+ African Americans specifically to feel loved, safe and accepted?

A: I think supporting the organizations in the South that are run by black LGBTQ+ folks, like Southerners on New Ground (SONG), National Organization of Black Lesbians on Aging (Zami Nobla) and others is the best way to help.

Q: The LGBT certificate program in the School of Social Transformation at Arizona State University introduces students to the interdisciplinary study of the identities, experiences and lives of LGBTQ+ people in the U.S. and abroad. However, the number of cisgender straight people attending these types of studies is still very low. What would you say to encourage them to enroll in these certificates?

A: Whether someone identifies as LGBTQ+ or not, it takes everyone who is committed to social equality to be an ally. Being an ally means a better understanding of what it feels like to be an “other.” One of the ways to get a better understanding is to take courses and interact with those who are different from ourselves. It is much harder to hold bigoted ideas toward people with whom you work beside, take classes with or share social space with.

Q: Could you give us a positive message for the future of the LGBTQ+ community?

A: Like every marginalized group, the LGBTQ+ community is resilient. No matter the obstacles put before our community, we continue to pursue the recognition of our humanity. It is that fighting spirit that has gotten us through a tumultuous past, and it is that spirit that ensures our presence and vibrancy for generations to come.

The screening is sponsored by Barrett, The Honors College, the LGBT Studies Certificate Program, School of Social Transformation, the Hugh Downs School of Human Communication, and Theatre and Performance of the Americas (PhD Program) and the Herberger Institute for Design and the Arts.

Every year since 2004, Arizona State University has seen enrollment numbers go up in STEM disciplines, which is why the university is helping shape coast-to-coast conversations about science, technology, engineering and math (STEM) learning inside and outside the classroom, especially in major museums.On Feb. 26, ASU’s Consortium for Science, Policy, and Outcomes co-sponsored an event with the A...

Every year since 2004, Arizona State University has seen enrollment numbers go up in STEM disciplines, which is why the university is helping shape coast-to-coast conversations about science, technology, engineering and math (STEM) learning inside and outside the classroom, especially in major museums.

On Feb. 26, ASU’s Consortium for Science, Policy, and Outcomes co-sponsored an event with the Association of Science and Technology Centers (ASTC) at ASU’s Barbara Barrett and Sandra Day O’Connor Washington Center to talk about the opportunities for informal STEM learning outside of a traditional classroom.

The event immediately followed ASTC’s Museum Advocacy Day, when advocates for museums and science centers met with legislators on Capitol Hill to convince lawmakers to increase funding for museums and other public spaces that support lifelong STEM education.

Jason Lloyd, assistant director for programs at the consortium and managing editor for Issues in Science and Technology, discussed how ASU is determined to discover new ways to make science more accessible and more democratic.

“One way we do these things is by finding and sharing some of the most compelling ideas for reforming science policy and the practice of research and innovation,” Lloyd said. “Another way is by collaborating with federal agencies, universities, science centers and think tanks to develop various methods of involving citizens in decision-making around a range of important science and technology issues.”

“As a whole, the community is really trying to push the bounds of public engagement in science across the full range of scientific topics,” said Adam Fagan, director of communications and advocacy at ASTC. “We wanted to engage some of the federal partners that have traditionally been close partners with the museum communities as well as extend to other mission-driven agencies whose topics have a need for public engagement.”

Carrie McDougall, senior program manager in the Office of Education at the National Oceanic and Atmospheric Association, explained how NOAA and other federal agencies fought for informal education language to be included in the America COMPETES Act, legislation aimed at strengthening STEM education in the U.S. She expressed how critical it is that ASTC, the Consortium for Science, Policy, and Outcomes, and other stakeholders continue this important fight.

“We strongly advocated for informal education being called out explicitly, and it was a fight, so your work is never done,” McDougall said. “You always have to be out there positioning informal education as a key component of a larger STEM education ecosystem.”