Lauren Hayes, assistant professor in the School of Arts, Media and Engineering in Arizona State University’s Herberger Institute for Design and the Arts and director of the Practice and Research in Enactive Sonic Arts (PARIESA) lab, presented her research into site-responsive sonic art, ecosystemic approaches to sonic interaction design and autopoiesis at a conference at the University of Chicago on Feb. 28-29.

The CHIME Studio at the University of Chicago hosted the CHIMEFest 2020: Circulations Symposium on Live Audio Feedback in Art conference as a gathering of artists and researchers from around the world who are working with audio feedback. The symposium included performances, sound installations, paper presentations and more. 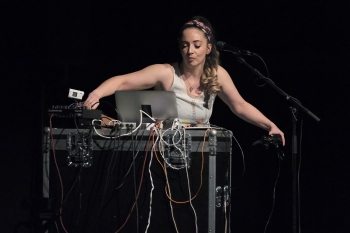 In addition to speaking at the conference, Hayes performed compositions involving auditory feedback by Oliver Hickman.

Hayes is also continuing her work on the Fluid Corpus Manipulation (FluCoMa) project with researchers at the University of Huddersfield in the United Kingdom. FluCoMa is supported by the European Union Horizon 2020 fund and "instigates new musical ways of exploiting ever-growing banks of sound and gestures within the digital composition process, by bringing breakthroughs of signal decomposition, DSP and machine learning to the toolset of technofluent computer composers, creative coders and digital artists.”

Hayes, an improviser, creative coder and theorist, has been working for over 14 months as part of the Fluid Corpus Manipulation project with researchers at the University of Huddersfield, and the first FluCoMa toolset is now available as a public beta for MaxMSP and several other creative coding environments. The second part of the FluCoMa toolkit will explore novel ways of recombining sound corpora using machine learning and other techniques. Hayes will return to the University of Huddersfield in July as part of a large study being conducted by FluCoMa doctoral students within the Centre for Research in New Music (CeReNeM). The FluCoMa team will explore her use of the new software tools through extensive technical analysis of her code in combination with the commissioned performance.

As part of the project, she performed a new commission at the Huddersfield Contemporary Music Festival, the U.K.’s largest international festival of new and experimental music in November. In a concert comprising five of the world’s leading electronic performers, including Richard Devine, Olivier Pasquet and Leafcutter John, Hayes gave the world premiere of a “Moon via Spirit.” Simon Cummings, a composer, writer and researcher based in the Cotswolds, south of England, called her performance “an exhilarating experience, its sense of direction was articulated like a kind of sped-up genetic evolution.”

The performance will be broadcast on BBC Radio 3 later this year.

Sun Devil Baseball takes to the road for the first time this season, traveling to Southern California for a two-game midweek set against Cal State Fullerton on Tuesday, March 3 and Wednesday, March 4. Both games will get underway at 6 p.m. locally (7 p.m. Arizona time). ... Sun Devil Baseball takes to the road for the first time this season, traveling to Southern California for a two-game midweek set against Cal State Fullerton on Tuesday, March 3 and Wednesday, March 4. Both games will get underway at 6 p.m. locally (7 p.m. Arizona time).