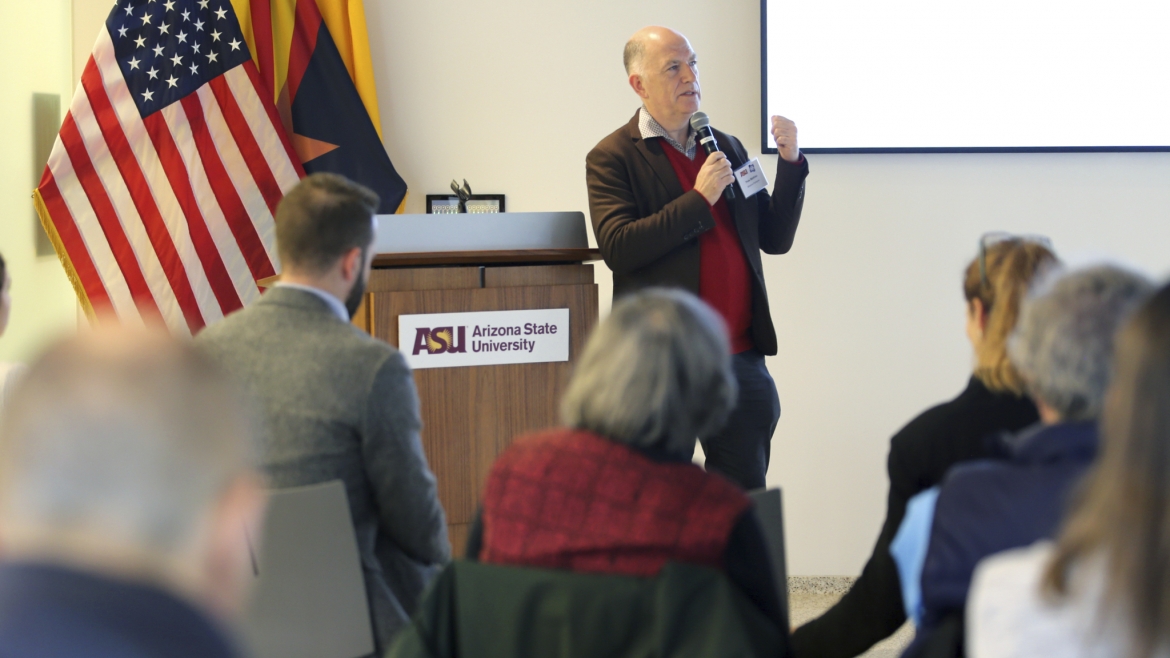 On Feb. 11, the Arizona State University Consortium for Science, Policy & Outcomes hosted an event at the Ambassador Barbara Barrett & Justice Sandra Day O’Connor Washington Center to discuss France’s recent democratic experiments that directly engage citizens in the policymaking process. The discussion covered how these recent experiments could be a model for other Western democracies seeking to engage citizens in the political process beyond regular avenues, like voting.

Yves Mathieu, co-director of Missions Publiques in France, keynoted the event. Mathieu co-organized both the Grand Debates and the Citizen Assembly on Climate, the two most recent French experiments in citizen policymaking. His organization, Missions Publiques, works to develop citizen participation processes in the design, implementation and evaluation of public policies. Mathieu and Missions Publiques have been partners of of the Consortium for Science, Policy & Outcomes for several years, and they have worked together to formulate ideas for citizen participation in government.

Mathieu provided firsthand context by discussing the climate protests in France and the yellow vest movement, which led French President Emmanuel Macron to look for new ways to engage citizens in politics. The first of these experiments was a series of local citizen consultation conventions, called the Grand Debates, in which half a million French people participated in 10,000 meetings nationwide to discuss pressing national topics, like taxes, the environment and the role of government. French officials also received more than 1.5 million online public comments about other issues of concern, like jobs and the economy.

The Grand Debates were followed by the Citizen Assembly on Climate, in which 150 randomly selected French citizens meet semiregularly to propose policies to reduce French greenhouse gas emissions by at least 40% compared with 1990 levels. These policy proposals are submitted to Parliament for a vote; considered by the electorate in a referendum; or implemented through new regulations. The Citizens Assembly also meets with Macron himself to discuss climate policy proposals.

After delivering a background on the events that sparked mass citizen participation, Mathieu engaged the audience through a series of questions that led attendees to discuss the role of the people in government and democracy. Participants also found themselves debating whether — and how — such a system might work in the U.S.

Dan Sarewitz, co-director of the Consortium for Science, Policy & Outcomes and professor of science and society at ASU’s School for the Future of Innovation in Society, moderated the conversation between Mathieu and the audience.

Mathieu emphasized the idea that citizens have ideas to offer that might not have been considered by subject-matter experts, which is why it is important that average citizens also be engaged in the policy process.

Mathieu and Sarewitz wanted participants to take what they learned and bring it with them into their own areas of work to spark change in how decision-making works generally.

“Democracy doesn’t only belong in Congress,” Sarewitz said. “But when the system seems broken there, we want people to know there are other resources they can use to help them feel a sense of positivity and opportunity through different mechanisms.”

“To include this sort of participation in the governance system, you need to have people who understand it and its value,” Mathieu said. “They need to understand that it is, in fact, not a threat, but an added value to the system.”

Sarewitz believes that these sorts of conversations about broadening civic participation should be happening everywhere, especially in Washington, D.C. Political dialogue can be polarizing. That polarization means that other actors, like the Consortium for Science, Policy & Outcomes, should take steps to make political conversations more productive.

“Somebody’s got to do it,” Sarewitz said. “And we’re the ones who are.”

The U.S. Basketball Writers Association has selected Remy Martin as its Oscar Robertson National Player of the Week. ... The U.S. Basketball Writers Association has selected Remy Martin as its Oscar Robertson National Player of the Week.