Sun Devil Lacrosse scores a program-record 24 goals in a dominant victory over Detroit.

Professor Patty Ferguson-Bohnee, faculty director of the Indian Legal Program at the Sandra Day O’Connor College of Law at Arizona State University, will be honored by the American Bar Association as one of five recipients of the 2020 Spirit of Excellence Award.Administered by the ABA’s Commission on Racial and Ethnic Diversity in the Profession, the Spirit of Excellence Award recognizes legal...

Wilson and Theisen Listed as Candidates for Senior CLASS Award®

Professor Patty Ferguson-Bohnee, faculty director of the Indian Legal Program at the Sandra Day O’Connor College of Law at Arizona State University, will be honored by the American Bar Association as one of five recipients of the 2020 Spirit of Excellence Award.

Administered by the ABA’s Commission on Racial and Ethnic Diversity in the Profession, the Spirit of Excellence Award recognizes legal professionals who have demonstrated excellence and a commitment to racial and ethnic diversity. Recognizing the challenges that racially and ethnically diverse professionals can face in the legal world, the motto for the award is “Ad Astra Per Aspera,” a Latin phrase meaning “to the stars through difficulties.” 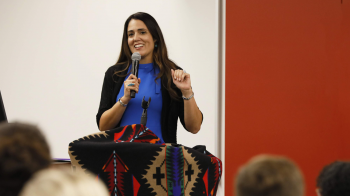 Patty Ferguson-Bohnee, clinical professor and faculty director of the Indian Legal Program at the Sandra Day O’Connor College of Law, presents at the program's welcome dinner in 2019. Download Full Image

The five recipients will be honored in a ceremony Feb. 15 at the American Bar Association’s midyear meeting in Austin, Texas.

Ferguson-Bohnee, who also directs ASU Law’s Indian Legal Clinic and serves as a clinical professor of law, joined ASU Law in 2007. And according to Robert Osley Saunooke, president of the National Native American Bar Association, her life and career in the legal profession can be summed up by one word: service.

And Saunooke noted, few have done more to advance the cause of Native American voting rights.

Longtime ASU Law colleague Myles Lynk, himself a past recipient of the Spirit of Excellence Award, underscored Ferguson-Bohnee’s work for the Indian Legal Program and Indian Legal Clinic, helping Native American communities throughout Arizona, her native Louisiana and the rest of the country.

“She has helped four Louisiana tribes obtain state recognition of their tribal status,” Lynk said. “She has represented tribal clients in administrative, state, federal and tribal courts, as well as before state and local governing bodies, and proposed revisions to the Real Estate Disclosure Reports to include tribal provisions. Patty has represented Native American litigants in complex voting rights litigation on behalf of tribes, and she has drafted state legislative and congressional testimony on behalf of tribes with respect to voting rights’ issues. In fact, Patty serves as the Native vote election protection coordinator for the state of Arizona.”

History of the Spirit of Excellence Award

Calleros said it was an honor to be recognized for his years of work organizing mentoring and prelaw programs for diverse populations of middle school, high school and college students.

“It has been gratifying to see that eighth-grade students in low-income communities can develop arguments in a legal method exercise, that high school students can advocate ably and persuasively in moot court competitions, and that college students can actively engage in a sample class taken from an actual lesson plan for an upper-division law course,” he said.

Lynk was recognized for the work he has done with minority student groups, as well as the National Bar Association, the nation’s oldest and largest national network of predominantly African American attorneys and judges.

“I had done a lot of work to make sure that we were addressing the needs — and to make sure that students were understanding their responsibility to help address the needs when they got into practice — of minority communities who really need legal representation,” he said. “So I was incredibly grateful and incredibly humbled to receive the award. It was quite an honor.”

Lynk said ASU Law is alone in having five Spirit of Excellence winners, and that Ferguson-Bohnee is the third representative from the Indian Legal Program, following Tsosie and Gover. 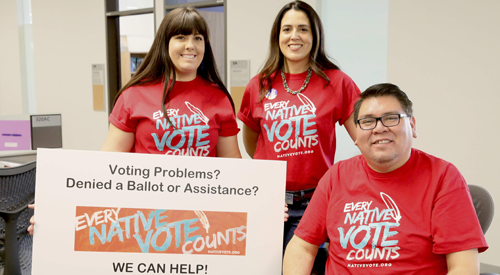 “The fact that three of those five are from our Indian Legal Program shows that that program is meeting the purpose for which it was established, which was to train lawyers to go out and serve Native American communities,” he said. “This award recognizes lawyers who help and provide services to diverse communities so they have access to justice. And our ILP is doing that in an incredible way. And Patty, especially, has done a remarkable job with her imprint on voting rights and how hard she has fought to make sure votes on the reservation are counted.”

Saunooke pointed out the unique struggles that Native Americans can face in the legal profession and how important it is for others to have role models like Ferguson-Bohnee.

“The Native American legal community is perhaps the smallest group within the legal profession,” he said. “As such it is not easy for a Native American law practitioner to not only find employment and serve in the legal community, but it is also difficult to excel in the profession. Lack of opportunities, misperceptions of Native law and culture, and a host of other issues regularly cause Native attorneys to leave the profession. For this reason, it is readily apparent that the accomplishments of Patty Ferguson-Bohnee represent not only a Spirit of Excellence in the legal profession but a shining light in the Native American community that leads the way for others to believe in and follow. Sometimes it just takes one person to show others what can be done. Patty is that one person.”