The complete list features 100 organizations represented by 127 Arizona State University alums. The diverse mix of organizations that make up the Sun Devil 100 class of 2020 has combined total revenues of $6.5 billion for last year, employs more than 12,000 people and has locations in 11 states. 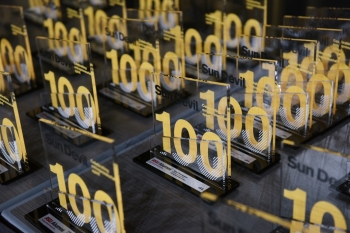 Sun Devil 100 honors the fastest growing companies led or owned by ASU alumni. The rankings for the Sun Devil 100 class of 2020 will be announced May 4. Download Full Image

“ASU alumni have created and led some of the most innovative and successful businesses and organizations,” said Christine Wilkinson, president and CEO of the ASU Alumni Association. “The Sun Devil 100 recognizes organizations from a variety of sectors that demonstrate innovation, growth and the entrepreneurial spirit reflective of ASU’s transformative charter.”

The conferral rankings of the fastest growing organizations by revenue growth rate will be announced at a special luncheon on Monday, May 4. To be considered for the Sun Devil 100, companies must be ASU alumni-owned or -led; have been in business for at least three years; have revenues of $250,000-plus in a calendar year; and operate in a manner consistent with the ASU charter. 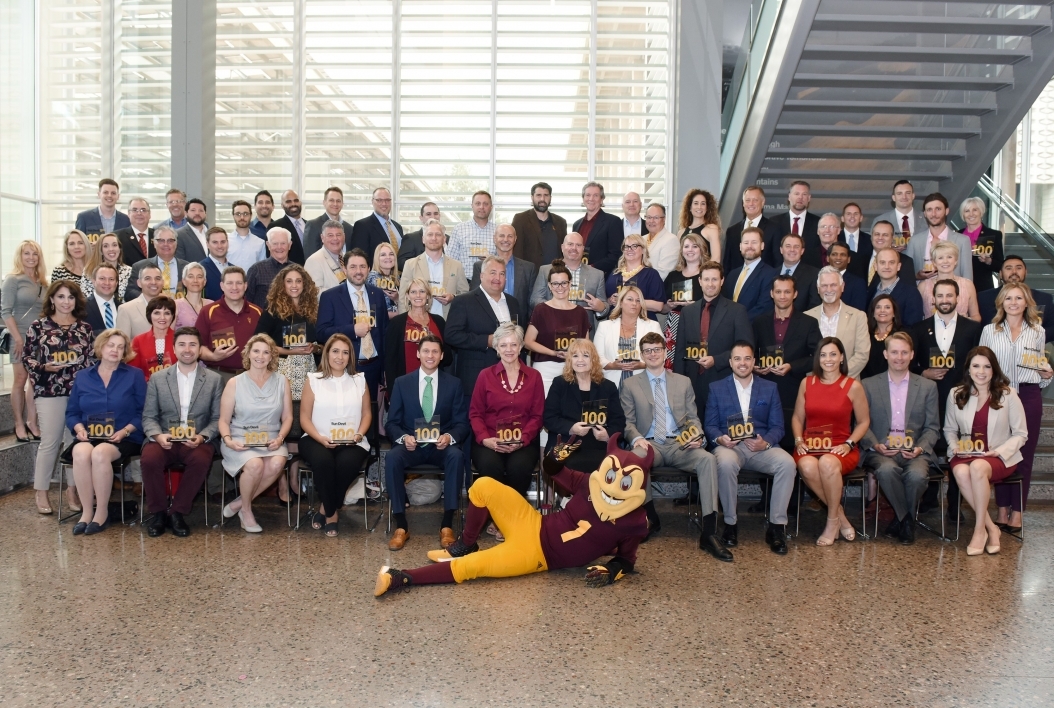 Phoenix Business Journal Market President and Publisher Ray Schey interviewed Vincent Switzer, ’04, ’07, co-founder and CEO of SeaBay Building Group, which was the No. 1 fastest-growing company in the Sun Devil 100 Class of 2019. Asquared Studios, an architecture firm with multiple offices in California, has been named to the class of 2020 and also was a class of 2019 honoree. The firm is co-owned by two alums who graduated with degrees from ASU’s architectural studies program.

Tony Garcia, ’95 bachelor's degree in design and co-founder and a principal architect with the firm, said, “ASU prepared us to have a very collaborative mentality. It allowed us to take that and what we learned into our adulthood and use it so that we could prosper as we do now in our business.” Co-founder and principal of Asquared Jessie Whitesides, ’95 bachelor's degree in design, said about being an entrepreneur, “To be a successful entrepreneur, you have to be passionate and resilient. You have to live, work, eat and breathe what you do.”

“We started Sun Devil 100 Stories, and it’s working with these honorees and their companies that have wonderful stories and presenting that in a format for the business community and students,” said Trish Gulbranson, Sun Devil 100 committee chair and former chair of the ASU Alumni Association board of directors and National Alumni Council.

Three Sun Devil 100 business owners from the class of 2019 will share their stories of entrepreneurship at the upcoming Sun Devil 100 Stories: Women in Business panel on Wednesday, March 18, at 5:30 p.m. at Papago Golf Course in Phoenix.

Sun Devil 100 committee member and partner and ASU Alumni Association National Alumni Council member Tim Gertz said about his involvement in the business recognition program, “To be able to be part of Sun Devil 100 and help support these honorees and help them achieve their goals and vision, I think that is one of the strongest bonds we can have as ASU alums.”

America is facing threats from the world’s other superpowers, and the only way to stave them off is to foster strong relationships with other countries, according to James Mattis, the former U.S. secretary of defense.“Allies, allies, allies. If you take the time to align the international community, you can modify other nations’ behavior. It does work,” said Mattis, who addressed a crowd a...

School of Politics and Global Studies , The College of Liberal Arts and Sciences , W. P. Carey School of Business , Herberger Institute for Design and the Arts 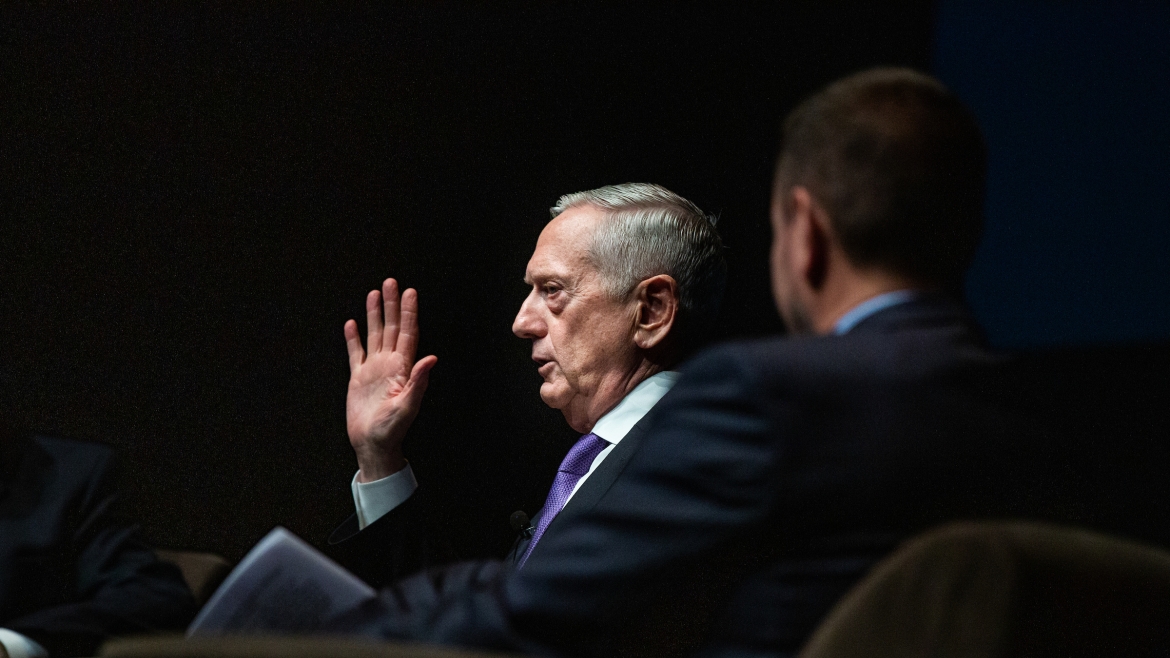 America is facing threats from the world’s other superpowers, and the only way to stave them off is to foster strong relationships with other countries, according to James Mattis, the former U.S. secretary of defense.

“Allies, allies, allies. If you take the time to align the international community, you can modify other nations’ behavior. It does work,” said Mattis, who addressed a crowd at Tempe Center for the Arts on Wednesday night. His talk, titled “Thwarting Threats and Nurturing Allies in Today’s Global Affairs,” was the annual John J. Rhodes Lecture in Public Policy and American Institutions, presented by Barrett, The Honors College at Arizona State University.

Mattis, a retired four-star general in the U.S. Marine Corps, served as secretary of defense from January 2017 until January 2019. In late 2018, Mattis announced that he planned to resign over President Donald Trump’s decision to withdraw all American troops from Syria. An angry Trump then moved up Mattis’ resignation date, essentially firing him.

“You all paid my tuition for over 40 years to learn how to defend this country, and I don’t know how to do it without allies,” he said.

“We need radar in South Korea and Japan to protect us from North Korea, so we need those allies.”

Mattis sees Russia and China as significant threats to the United States. In his resignation letter to Trump, he said those countries “… want to shape a world consistent with their authoritarian model.”

In his talk Wednesday night, Mattis said that the United States tried to deal with Russian President Vladimir Putin as a “rational and contributing member” of the international community in the 2000s and late 1990s, but it didn’t work.

“No nation has talked about such cavalier use of nuclear weapons as Russia under Putin,” he said.

“He mucked around in our elections, even if some people don’t believe it. He’s done his level best to change the borders in Europe, and now we have to deal with Putin as he is, not as the Putin we want.” 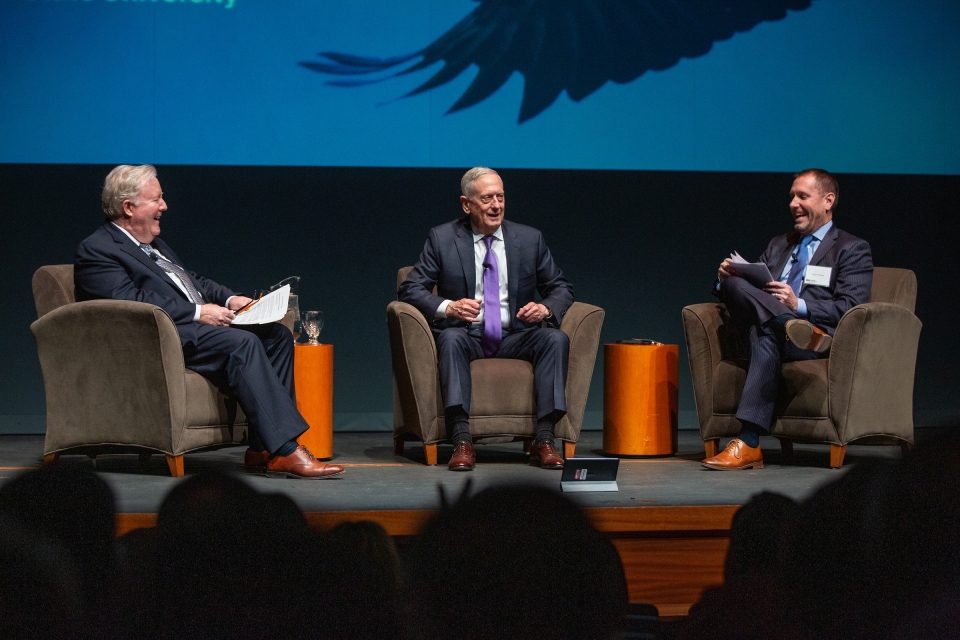 Mark Jacobs (left), dean of Barrett, The Honors College, and Taylor Rhodes (right), grandson of John Rhodes, take turns asking James Mattis questions about his career, service and global issues during the 2020 John J. Rhodes Lecture in Public Policy and American Institutions at the Tempe Center for the Arts on Wednesday. Photo by Deanna Dent/ASU Now

Mattis believes China is untrustworthy and says that although our two countries’ economies are entwined, our political systems can never be.

“We have to collaborate where we can, on North Korea, drug trafficking and terrorism,” he said.

“But there’s no counterweight to their political party. We thought that when we brought them into our economic world, they would liberalize politically, but it didn’t work. Look at what they’re doing in Hong Kong.

“We don’t share enough values with a country that treats its people the way they do. I don’t think we’ll ever see an alliance.”

Mattis, who served as NATO's Supreme Allied Commander Transformation from 2007 to 2010, said that one of America’s greatest accomplishments was helping to rebuild the defeated countries after World War II.

“We went to our former foes and allies and helped put them back on their feet economically,” he said.

He is a strong believer in the balance of diplomacy and military might.

“My job was to run the military operations, but my real job was to keep the peace for one more year, one more month, one more week, one more day, one more hour while the diplomats worked their magic,” he said.

“America is a great power, but our two fundamental sources of power are the power of inspiration and the power of intimidation. In an imperfect world, we need a military so tough that they want to deal with our diplomats.”

For Mattis, alliance building started at home. Before he was even confirmed as secretary of defense, he met with Rex Tillerson, the secretary of state.

“They had militarized foreign policy since the Berlin Wall came down, and we needed to get diplomacy back in the driver’s seat."

So Mattis and Tillerson met weekly.

“It was a very powerful way to go into decision-making, and it helped me a great deal on budgeting because it allowed bipartisan support,” Mattis said.

But their alliance was short-lived. Trump fired Tillerson in March 2018, and Mattis left nine months later.

In fact, Mattis was the second Rhodes lecturer to leave the administration after being at cross purposes with Trump. The 2019 lecturer was John Brennan, who served as director of the Central Intelligence Agency from 2013 to 2017 before having his security clearance revoked by Trump.

Since his departure, Mattis has not spoken publicly about Trump, and he didn’t speak specifically about the president on Wednesday night. He did say: “I wanted to go four years and I left at two because I would not be party to going back on our word. We have to learn that we have to stick with our word.”

Mattis’ talk was moderated by Mark Jacobs, dean of Barrett, and Taylor Rhodes, CEO of Applied Systems and the grandson of John Rhodes. Rhodes said his grandfather was the embodiment of a public servant, and he asked Mattis how Americans can overcome their disillusionment with the divisive nature of the country today.

Mattis responded that America still has a potent power of inspiration, which is its strongest asset. He recounted the story of visiting a Marine outpost in Syria, where a local man was held after being caught trying to set a bomb in the road. Mattis talked to the man, who said his rage over his war-torn country led him to try to kill American troops. After being told he would be imprisoned, he asked Mattis whether, if he was a model prisoner, he and his family could eventually immigrate to America.

“The power of inspiration can go halfway around the world to a man filled with hate. He would love to sit here and have his daughters go to this school,” he said.

“On our worst day, we’re still the best thing going.”

Top image: Former U.S. Secretary of Defense James Mattis was the speaker at the annual John J. Rhodes Lecture in Public Policy and American Institutions at the Tempe Center for the Arts on Wednesday. Photo by Deanna Dent/ASU Now