In a new study, researchers at Arizona State University's Biodesign Institute and their colleagues explore new materials with physical properties that can be custom-tailored to suit particular needs. The work is inspired by mechanisms in nature, where the complex three-dimensional structure of surrounding proteins influences the electrochemical properties of metals at their core. 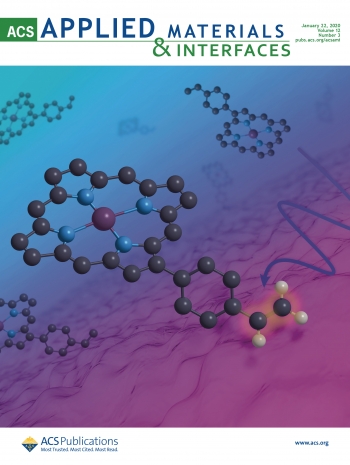 The advances could have broad implications for the design of many new innovations useful for semiconductor technology, sustainable energy and industrial production.

Lead author Brian Wadsworth and his collaborators describe techniques for immobilizing metal complexes onto physical supports that are both transparent and conductive. The resulting hybrid materials permit synthetic control over the configuration, allowing researchers to regulate the shuttling of electrons within the composite material.

Precise control over material performance may be accomplished through modification of material interfaces. According to corresponding author Gary Moore, “any time two things touch each other, they form an interface. Material interfaces are central to our work.” It is in these regions that modifications designed to adjust a material’s physical properties take place.

The current study extends the group’s earlier efforts with semiconductor materials, which involved the capture and conversion of solar energy to produce fuels. Accomplishing this requires the ability to control reactions and chemical entities that increase their rate, known as catalysts. 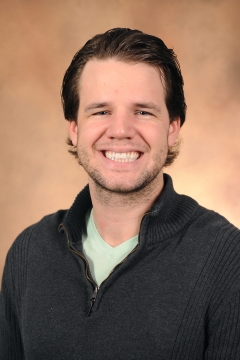 Brian Wadsworth is a graduate student in the School of Molecular Sciences.

“Our use of molecules on surfaces can have a wide range of applications, including solar energy conversion, catalysis, and chemical manufacturing via green chemistry,” Moore said.

In addition to Wadsworth and Moore, both researchers in the Biodesign Center for Applied Structural Discovery, the team includes Diana Khusnutdinova and Jennifer M. Urbine (formerly with the Biodesign Institute and currently at Intel and the doctoral program at UC Irvine, respectively). Khusnutdinova is also formerly a graduate student and Urbine formerly an undergrad in the School of Molecular Sciences. Ahlea S. Reyes, who began working in the Moore lab as a high school student and is currently an undergraduate at ASU, also contributed to the new study.

The research graces the cover of the latest issue of the journal ACS Applied Materials & Interfaces.

Catalysts play a vital role in processes involving the conversion of energy and are important in both biology and technology. The current study provides valuable information that could lead to advances in efficiency, reliability and scalability of sustainable energy solutions. The mounting energy crisis puts efforts to better understand the electrochemistry of new materials on the fast track and opens far-reaching possibilities for new technologies.

Conventional catalysts like those used in industry are usually based on two-dimensional surfaces. Here, reactants are brought together in order to produce a desired product. Catalysts speed up the rate of such reactions. One of the most basic transformations is hydrogen production, where electrons and protons are brought together to form molecular hydrogen. In this case, platinum is commonly used as a catalyst.

Nature, however, has found a cheaper and more efficient means of hydrogen production. “Biology doesn't use two dimensional sheets of platinum,” Moore explained. Instead, life forms carry out this transformation with the aid of specialized enzymes. “Enzymes often contain metal centers where the reactivity is occurring, but their specificity comes from their unique three-dimensional structures.”

Their unique approach results in materials inspired by such three-dimensional architectures in order to guide reactions that bring together multiple substrates — substances on which catalysts act. Creating three-dimensional soft matter environments, similar to those found in proteins, permits researchers to apply fine-grained control of these reactions in both space and time.

“Brian has worked out an approach to attach relatively thin molecular coatings, including polymers, onto an electrode surface,” Moore said. “Now these electrode surfaces have three-dimensional molecular environments, where we can purposefully deposit a metal center.”

These metal centers are the sites of so-called reduction-oxidation or redox reactions, where electrons are gained or lost. 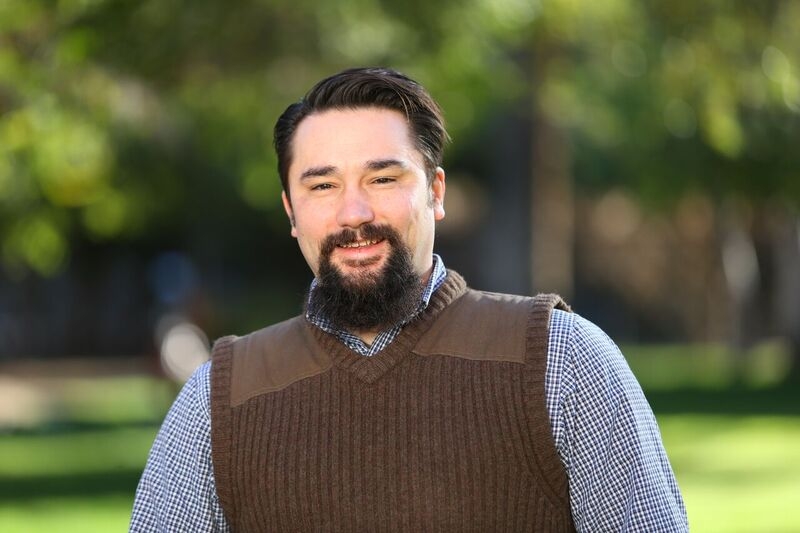 Gary Moore is a researcher in the Biodesign Center for Applied Structural Discovery. He is also assistant professor in the School of Molecular Sciences at ASU, a Julie Ann Wrigley Global Institute for Sustainability scholar and guest faculty at Berkeley Lab. Moore’s research efforts and role as an exceptional scientific mentor were honored with a 2016 NSF CAREER Award.

The method helps overcome one of the primary limiting factors in designing effective catalysts. Conventional catalysts typically use rare earth metals like platinum, which, as their name implies, are scarce and very costly. Instead, by creating a three-dimensional hybrid material consisting of structurally well-defined homogeneous components that are bonded to a heterogeneous support structure, the synthetic material can be made with far cheaper and more earth-abundant metals like cobalt (used in the current study). The authors stress that these innovations can not only reduce the cost of new materials but improve their efficiency and stability as well.

“Again, that's the bio-inspired part of our vision for developing these molecular coatings,” Moore said.

In order to design the new material, Wadsworth uses some of the sophisticated attachment chemistries developed in earlier work on light-gathering semiconductors. Experiments described in the new paper investigate the effects of applying these chemistries to the surfaces of conducting materials. This enables the researchers to directly probe the electrochemical properties of the embedded metal centers.

“We're getting mechanistic information on how the soft material or protein-like environments control the chemistry occurring at the metal center,” Wadsworth said.

Once the metal-containing complexes are bound to the electrode surface, the surrounding molecular environment can be subtly modified to alter the redox responses.

“Every chemical transformation involves changes in structure and energy that are associated with a chemical potential,” Moore said. “The coatings reported in this work enable the surface-immobilized metal centers to operate across a relatively large span of potentials for applications in a range of chemical processes and emerging technologies.”

Some of these new ideas were recently discussed at the Winter Inter-American Photochemical Society (I-APS) Conference, which took place in Sarasota, Florida, Jan. 2–5. The lively conference was co-organized by Moore and his colleague Elizabeth Young of Lehigh University and brought together leading scientists in all areas of the photochemical sciences, from North and South America.

At the meeting, Wadsworth presented a poster titled, “Bridging Concepts between Heterogeneous-, Homogeneous-, and Bio-Catalysis to Model Photoelectrosynthetic Reactions” and received an award supported by the journal ACS Applied Materials & Interfaces, (the same journal featuring the current research cover story).

The researchers believe one of the strengths of bio-inspired and molecular-based strategies is the diversity in structure and function this approach enables.

“Diversity brings increased creativity and promotes innovation. This notion is leveraged not only in the materials we construct, but also in the team of researchers that guide the ongoing evolution of our science,” Moore said. “The current work features contributions from high school, undergraduate, graduate, and postgraduate students from across the globe.”

In addition to his research position at the Biodesign Institute, Moore is assistant professor in the School of Molecular Sciences at ASU, a Julie Ann Wrigley Global Institute for Sustainability scholar and guest faculty at Berkeley Lab. Moore’s research efforts and role as an exceptional scientific mentor were honored with a 2016 NSF CAREER Award.