Fifty years ago, Mark Reader joined protests at ASU and in the Valley demanding clean air and water as part of the original Earth Day. Today, the emeritus professor of political science continues advocating on behalf of the environment — although these days, he’s taking a slightly different approach.Reader, a talented painter, is promoting a healthier world through his art, something he has re...

Fifty years ago, Mark Reader joined protests at ASU and in the Valley demanding clean air and water as part of the original Earth Day. Today, the emeritus professor of political science continues advocating on behalf of the environment — although these days, he’s taking a slightly different approach.

Reader, a talented painter, is promoting a healthier world through his art, something he has recently returned to creating after many years. He said art can make an impression on people just like the public awareness that helped bring about the first Earth Day in 1970. 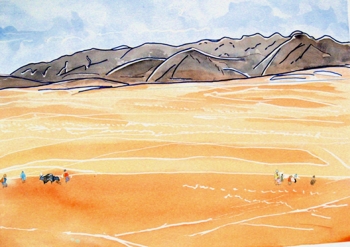 Mark Reader, "Human Scale" (Sacred Valley of the Inca, Peru), 2013. Watercolor, 20 1/2 x 28 3/4 in. Loan: Private Collection. Paintings and mixed-media artworks by ASU Emeritus Professor of political science Mark Reader are on view through May 15 in an environmental-themed exhibition at the University Center at the Downtown Phoenix campus. Download Full Image

Reader’s exhibition of paintings and mixed-media artworks, “Notice Nurture Nature … and Each Other: A Carbon Reduction Art Installation,” is on view through May 15 in the University Center lobby at the ASU’s Downtown Phoenix campus. The presentations of desert wildflowers, edible produce and depictions of people living in sync with their surroundings commemorate that first Earth Day, he said.

Listening to Reader talk about the show is to hear echoes of the themes of decades ago as the world deals with climate change today:

“The art show teaches us, if we wish it, how to relate to nature and to each other in a less destructive place. It teaches us to notice the natural world around us, and to use the arts to create a noninvasive, nonabusive culture, based on the sustainability of nonviolence and human restraint,” Reader said.

“That’s what I’m trying to encourage in the show, is for people to think about living in harmony with the world, and to begin to exercise the skills they’ve never been given in terms of living in a less violent way." 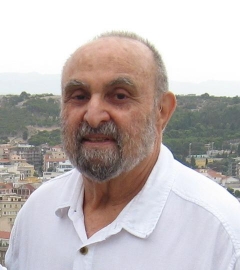 Five decades go, air pollution created hazy, smoggy skies over U.S. cities, and waste material was dumped into lakes and rivers, fouling waterways. At the time, few laws existed to protect the natural landscape and the plant and animal life that lived there.

Reader was at ASU then, having begun teaching political theory in 1967 after moving from Pennsylvania, attracted by the desert’s beauty. But even Arizona was beginning to experience the harmful effects of automobile exhaust and smokestack emissions. Some days you couldn’t see Camelback Mountain, he said.

Many students, professors and others were involved in ASU’s celebration of that first Earth Day, with demonstrations, experiments and learning activities, he recalled.

Some of the first efforts at establishing Arizona as a solar power producer began then, he said, building a foundation for today’s response to climate change. In 1970, the idea of looking at the whole planet in perspective was new, Reader said. Today, fossil fuels and chemicals are central to the global economy, and governments aren’t as responsive to effecting change as they once were.

Now in his mid-80s, Reader said he’s offering an artistic perspective to encourage thinking about inventing a new world where we are no longer consumers of resources but conservers of them.

“We can’t have a global consumer economy with more and more people polluting,” he said. “We have to change our cultural habits.”

Reader has contributed many of his paintings, each with an environmental theme, to charities and educational institutions in Arizona and Washington state, including at St. Joseph’s Hospital in Phoenix and ASU’s Emeritus College art collection at both the Tempe and Downtown Phoenix campuses, as well as the permanent art collections of the University of Washington at Tacoma.

He dedicated his show at the University Center to teenage environmental activist Greta Thunberg, whom Time magazine named its 2019 Person of the Year, and the global student-led climate strike movement.

He said he invites both “the powerful and well as the powerless” to join in creating those solutions.

“I think the arts do that. They are very invitational,” Reader said. “I invite you, through my art, to pause to think about what you can do, no matter who you are, to limit the damage that you do. We all do damage. When we start blaming each other, something common in our politics now, we don’t get anywhere. It’s not functional.”

A public reception for Mark Reader’s exhibition on the Downtown Phoenix campus, “Notice Nurture Nature … and Each Other: A Carbon Reduction Art Installation,” will be 3 to 5 p.m. Friday, Jan. 24, in the lobby of the University Center, 411 N. Central Ave., Phoenix.