Earth in its distant past was very different from today. 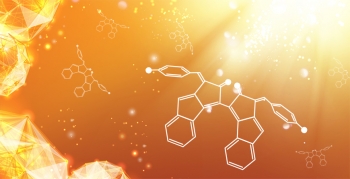 Scytonemin is a light-absorbing molecule that cyanobacteria produce to protect themselves from ultraviolet A radiation. Download Full Image

Scientists, however, do not know exactly when cyanobacteria evolved, though most believe that according to the rock record, oxygen began to accumulate some 2,400 million to 2,200 million years ago. (For comparison, the human lineage is only 5 million to 7 million years old.)

Now, Ferran Garcia-Pichel, director of Arizona State University's Biodesign Center for Applied and Fundamental Microbiomics and a professor in the School of Life Sciences, has discovered that the dynamics of atmosphere oxygen on Earth have been recorded in the evolution of the genes in a “sunscreen molecule.” The molecule is called scytonemin (pronounced sci-toh-nuh-min). Scytonemin is a highly efficient protective biomolecule used in sunscreens.

In his paper, “Timing the evolutionary advent of cyanobacteria and the later great oxidation event using gene phylogenies of a sunscreen,” published in May in the American Society of Microbiology’s open access journal MBio, Garcia-Pichel and his team have used purely biological methods to determine when and how Earth became an oxygen-rich environment. This is referred to as “the Great Oxygenation Event” — arguably the single most significant environmental change for living organisms yet to have taken place.

“In my lab, we don't shy away from using different methods,” he said. “We tend to follow the questions and use whatever discipline is necessary to find out the answers instead. And who knew that asking a simple question about one molecule would teach us something about the history of Earth?”

Scytonemin is a light-absorbing molecule that cyanobacteria produce to protect themselves from ultraviolet A radiation. Cyanobacteria are photosynthetic microorganisms that are able to take up carbon dioxide and release oxygen. Upon close inspection, the complex molecular structure of scytonemin looks like a butterfly.

“Not only does the molecule, scytonemin, look like a butterfly, but it even moves like a butterfly, and this is how it releases as heat the energy from the ultraviolet rays it has absorbed,” Garcia-Pichel said.

Cyanobacteria from high light environments synthesize and excrete scytonemin out into a slime coating, where it acts like melanin in our skin: a natural sunscreen.

“So we understand how scytonemin works, but then we also wanted to understand why,” Garcia-Pichel said. “I mean, it is very expensive for this little organism to synthesize sunscreens, and it wouldn’t do this unless there was a real need. For cyanobacteria it can take an investment equivalent to several percent of their own weight to make a sunscreen effective. That is like humans having to produce an extra six pounds of melanin.”

Garcia-Pichel’s team theorized that the scytonemin fluttering was linked to oxygen.

“This oxygen production combined with the UVA rays created an immediate danger for the microbes. For their own survival, they began to produce scytonemin. This is incredibly important to note. We realized that this adaptation was a true time biomarker in time that pinpointed the Earth’s Great Oxygenation Event.” 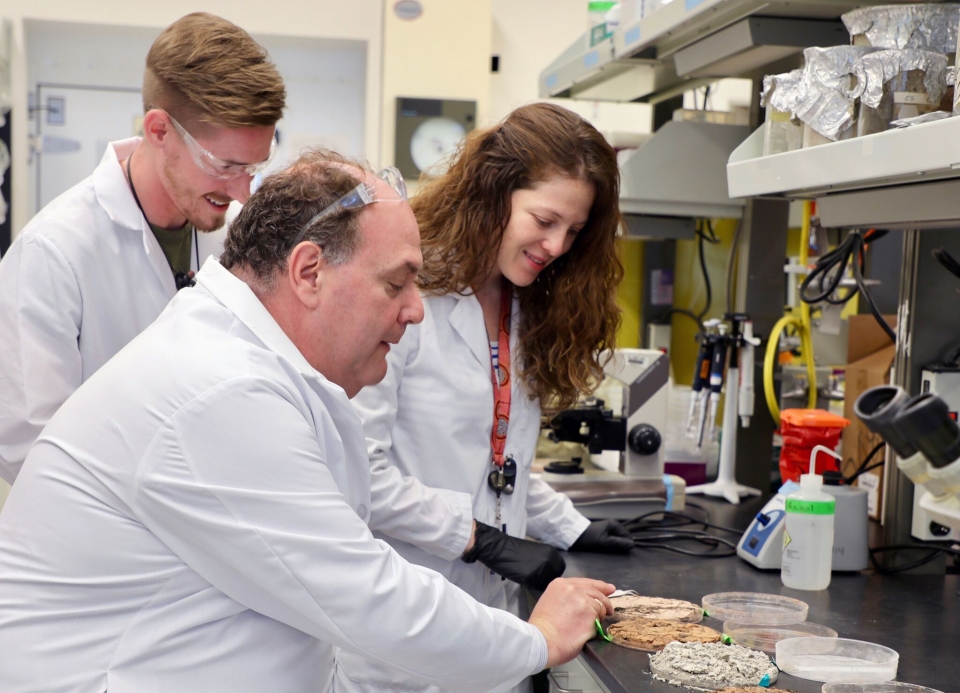 Ferran Garcia-Pichel and his team have used purely biological methods to determine when and how Earth became an oxygen-rich environment — referred to as “the Great Oxygenation Event”— arguably the single most significant environmental change for living organisms yet to have taken place.

“In our lab we allow the microbes to tell us about all the things they do,” Garcia-Pichel said. “We first turned to the cyanobacteria’s genetics and determined the genes responsible for making scytonemin.”

After meticulously mutating the genome of the cyanobacteria, gene by gene, the genes responsible for scytonemin could be found.

“There are really two blocks of genes,” he said. “One is a block of biosynthetic genes that synthesize scytonemin proper, and the other set ramps up the production of the aromatic amino acids from which it is built. It’s really the second set of genes that allowed us to trace its history because it was a duplicated set of a genes that we could place into the general picture.”

Garcia-Pichel and his team began to trace these genes with a phylogenic approach — an approach that tracks an organism’s ancestry by studying the changes in genes as pioneered by Linus Pauling’s “molecular clock.”

“So, we built a phylogenetic tree for each of the genes, and then showed where the scytonemin genes appear in the tree,” Garcia-Pichel said. “We calibrated the timing of the evolutionary appearance of these genes using the fossil records of cyanobacteria and avoided the use of the non-biological time markers that rely on changes in the rock record.”

With their detailed phylogenic tree and the fossils to verify time, Garcia-Pichel’s team was able to provide a whole new way to date not only the Great Oxygenation Event, but also the appearance of cyanobacteria themselves. They were able to independently confirm that Earth oxygenated roughly between 2,100 million and 2,300 million years ago, as geochemists had predicted. Further, cyanobacteria appeared to be 3,600 million years old — thus, it must have taken cyanobacteria some 1,300 million years of producing oxygen to change the face of the planet — which according to Garcia-Pichel is “a much more paced rate of climate change that we are experiencing now, for sure.”

This research was partially funded by a grant from the U.S. National Science Foundation to Ferran Garcia-Pichel. (Number 1158551).

The end of the year is often a time for reminiscing, and on Dec. 17, 11 former presidents of Arizona State University's Senate got the chance to reminisce together.Invited by the current president, Shirley Rose, the former presidents gathered for lunch and conversation in the Graham Room at the Memorial Union. Only a few of those present were still active members of the ASU faculty, but a number r...

The end of the year is often a time for reminiscing, and on Dec. 17, 11 former presidents of Arizona State University's Senate got the chance to reminisce together.

Invited by the current president, Shirley Rose, the former presidents gathered for lunch and conversation in the Graham Room at the Memorial Union. Only a few of those present were still active members of the ASU faculty, but a number remain linked to ASU, thanks to the connections of the Emeritus College. 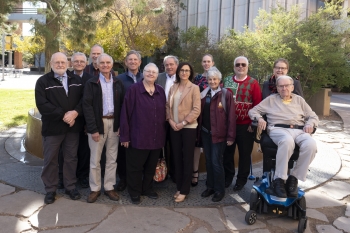 Each attendee talked about a few key experiences of their presidencies.

One major topic was how the aspects of service in the Senate and as president have shifted due to university changes during the past 30 years. From a university of roughly 42,000 students on one campus, ASU has grown to four campuses with over 70,000 students and nearly 40,000 online students. In 2008, a single Senate with representatives from all campuses was formed, and a massive revision of the ACD policy manual was completed, now applying to all campuses.

While noting the different issues they worked on, the former presidents also highlighted the common experience of working for shared governance at ASU.

For example, each Senate president promoted active faculty participation in working with the administration and the Board of Regents to improve the university. The former presidents also described their presidential service — with the opportunities to benefit the institution and to work closely with colleagues on these issues — as a high point of their careers at ASU.

Rose also sought advice about moving ahead in the future, with the aim to make the luncheon an annual event to provide a sounding board for future presidents. 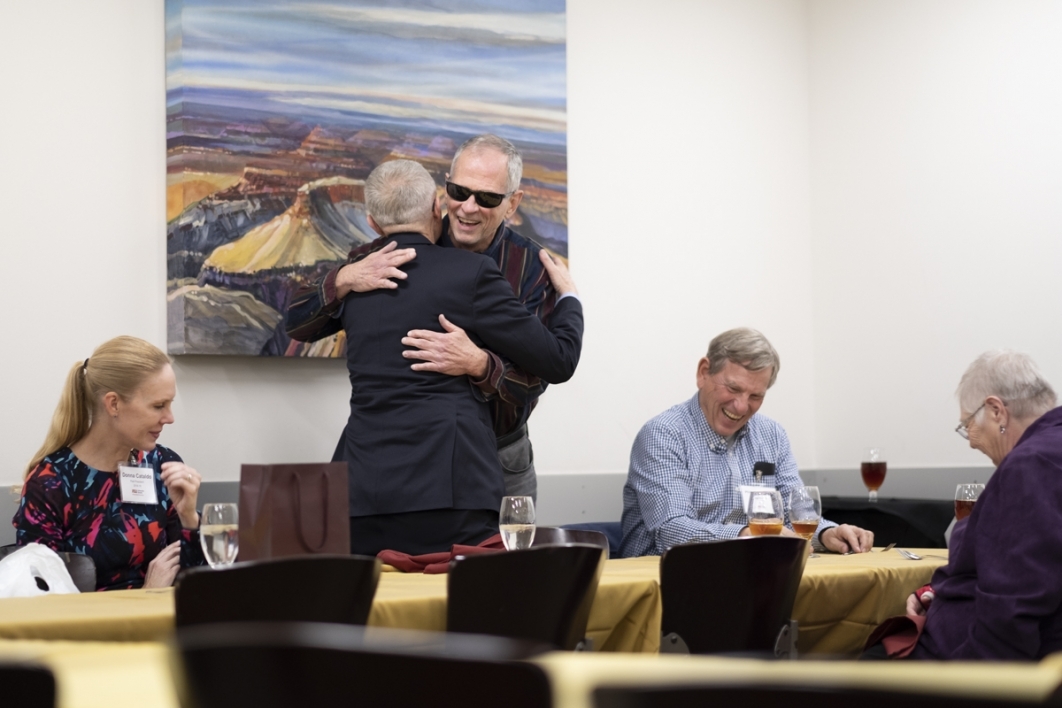 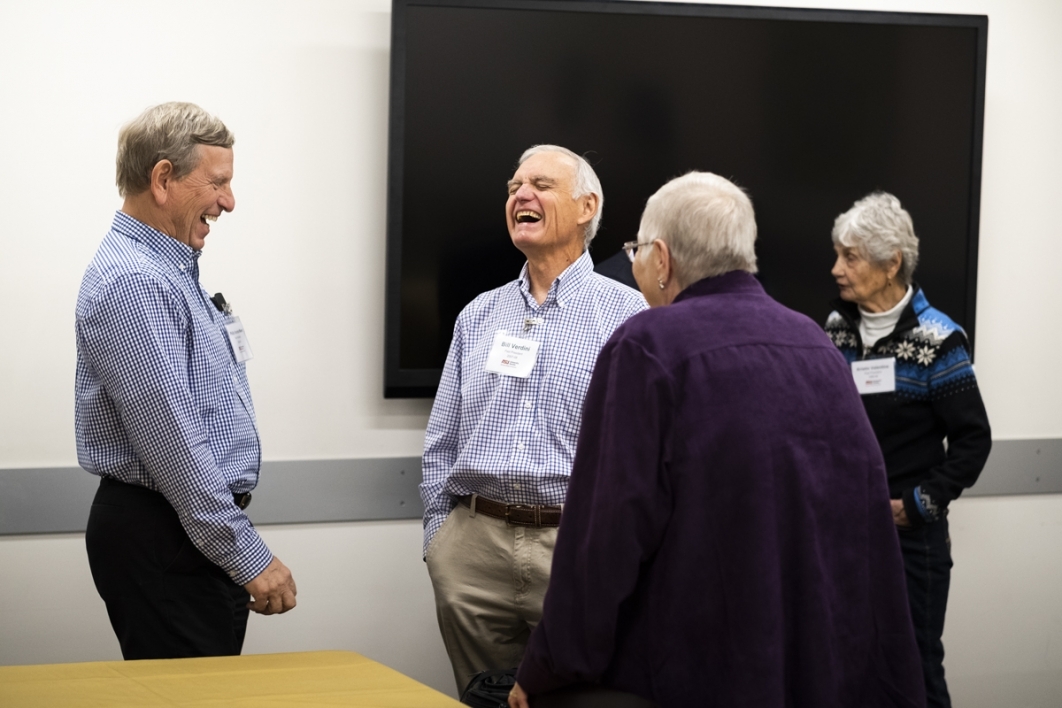 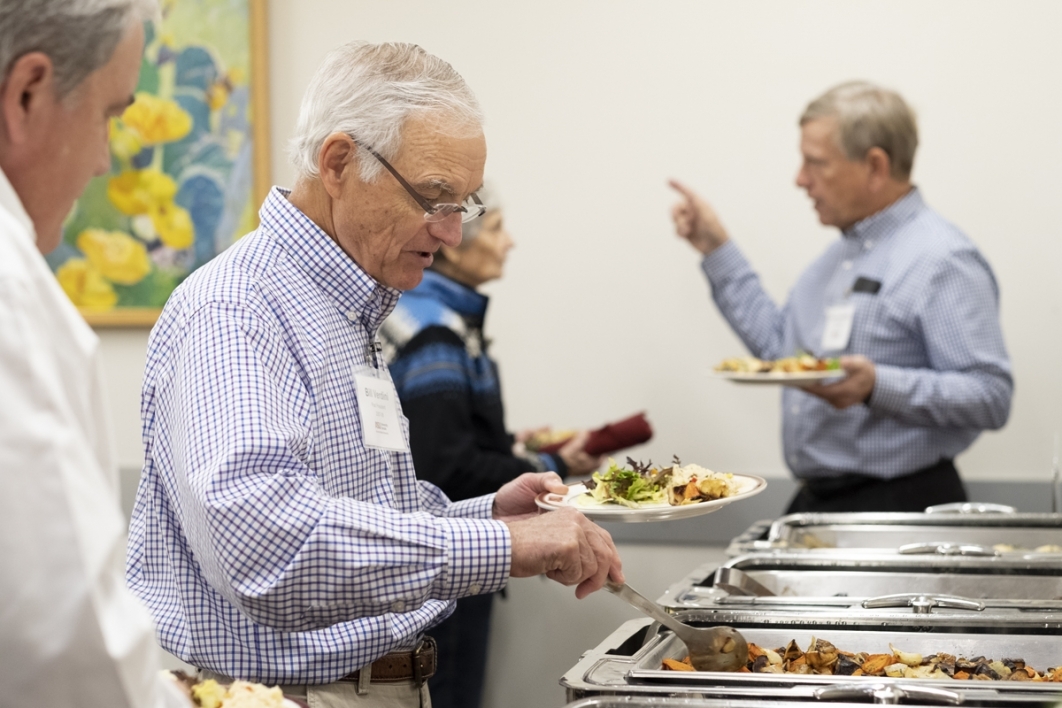 Bill Verdini helps himself to food at the Past Presidents Luncheon 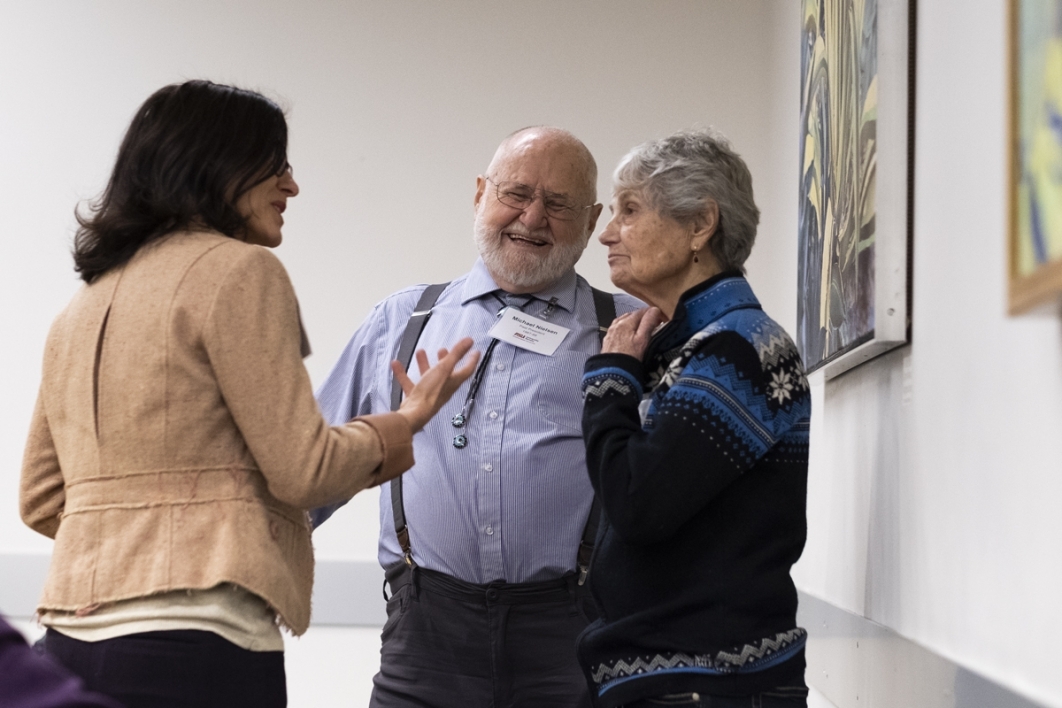