ASU students search for solutions to solar problems in Cyprus

Last summer, four Arizona State University students from the Ira A. Fulton Schools of Engineering participated in collaborative solar energy research as a part of the National Science Foundation’s International Research Experiences for Students program. The students joined Professor Andreas Spanias to spend four weeks at the KIOS Research and Innovation Center of Excellence at the University of Cyprus in the Republic of Cyprus. 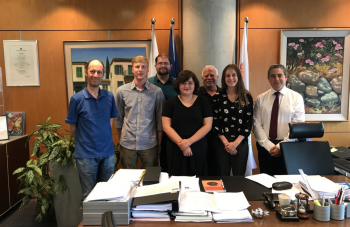 Spanias, an electrical engineering professor in the School of Electrical, Computer and Energy Engineering, is the founding director of the NSF Industry/University Cooperative Research Center SenSIP.

In Cyprus, the students worked in the lab of University of Cyprus Associate Professor Elias Kyriakides in the area of sensors and machine learning for solar energy monitoring performance, forecasting and anomaly detection applications. Kyriakides, who earned master’s and doctoral degrees in electrical engineering from ASU in 2001 and 2003 respectively, has been a longtime collaborator with Fulton Schools students and faculty.

The project promotes international multidisciplinary research in the areas of sustainability, power systems and signal processing with the aim of improving efficiency in photovoltaic power generation.

“Through this program, I learned how research is conducted in Cyprus,” Booth said. “I also had the chance to meet and interact with Cypriot researchers on a regular basis.”

By the end of the experience, the Fulton Schools students were trained in machine learning algorithms, producing and understanding solar analytics and creating algorithms and software to control solar arrays. They also learned how to effectively present their research results through various workshops including one held in Cyprus.

The challenging problem of fault detection and localization

In remote areas, hundreds or thousands of panels can contribute power to the electrical grid. If one of the panels has a fault, is underperforming or is soiled (by something like bird droppings), it becomes a challenging problem. In the event of a remote fault, technicians sometimes have to go out and remove a series of panels from the grid and use measuring equipment to localize which panel is experiencing problems. This becomes costly in terms of time, labor and travel expenses.

Spanias’ team at SenSIP is working on a related problem with solar panels — the issue of detecting and predicting shading patterns on a utility-scale solar array.

“Because of the massive deployment, you need statistical data analysis and machine learning algorithms to detect whether you have a fault or not,” Spanias said. “Sometimes partial or full shading will reduce the output of the system.”

In order to determine whether there is a fault or partial shading, one must run classification algorithms that are trained to detect certain types of faults. The analysis identifies the type of fault and, with the aid of actuators in the SMDs, can reduce or remedy the effects of a fault until technicians can do the necessary repairs at the facility if needed.

That, however, is only part of the story when it comes to optimizing power production.

In Cyprus, the students addressed the problems shade may cause in solar arrays. There they gained access to solar array data, including data under different shading patterns. Using this data, they were able to simulate the shading effects on power output.

Currently, most solar panels are connected in series requiring the removal of the entire series of panels from the grid to repair a faulty panel; this is similar to strands of holiday lights where one bulb is removed and the entire strand goes out.

“Intelligent algorithms can try to solve this problem and can create a system to change connection topology for solar panels to maximize possible power,” Spanias said.

The students’ participation in the IRES program can be partly credited to Spanias’ long history of international collaborations in sensors and signal processing.

The connection between ASU and the University of Cyprus started in 2009 when Spanias received a joint grant from the European Union. There are currently multiple projects between the two universities focused on solar energy monitoring and control, a topic that SenSIP has been working on for many years.

The KIOS Research and Innovation Center of Excellence developed sensor technology for solar rooftop systems. With this technology and assistance from local companies, KIOS is able to monitor hundreds of household rooftop installations.

One event that precipitated some of this work was the Fukushima nuclear accident in Japan in 2011. After the incident, officials wanted to place solar power facilities in the area to help replace the energy production capacity that had been lost in the region. But they also had to figure out how to monitor the solar panels as humans would not have been able to be sent in to monitor individual panels in the radioactive area. The solution was to create a method of remotely monitoring the panels and also be able to remotely repair issues without human exposure to the radiation.

More engineering students can look forward to participating in research at KIOS through the IRES program. The project has received funding for three years and will bring mutual benefits to both institutions. The research collaboration between the faculty and the students in both countries continues throughout the year, enabling the students to have a well-rounded research experience and complete their assigned projects.

Preliminary results from an evaluation of the IRES program by Wendy Barnard, an assistant research professor at ASU, found that students appreciated the opportunity to work with diverse groups of researchers.

“I thought this program would be a great way to apply the skills I had learned during the year into an international setting,” says Pedersen. “Getting to collaborate with researchers from the University of Cyprus was very exciting.”

In addition to their positive research experiences, evaluation results showed that students also enjoyed the cultural experiences they gained while in Cyprus. They visited archeological sites and beaches, interacted with people in the communities they visited and learned how to navigate their way around the country using local transportation.

“We had the opportunity to visit many cultural sites and talk with a diverse group of people from both within the university and out, which was very enriching,” says Pedersen.

The students reported that highlights outside of the lab included visiting the U.S. Embassy in Nicosia, Cyprus, where they met Sondra Sainsbury, Fulbright/alumni coordinator, and Glen Davis, public affairs officer. The students also met with several university administrators, including Tasos Christofides, rector of the University of Cyprus, and Marios Polycarpou, director of KIOS.

Both institutions look forward to continuing the collaboration and to having the next set of Fulton Schools students return to Cyprus in the summer of 2020. 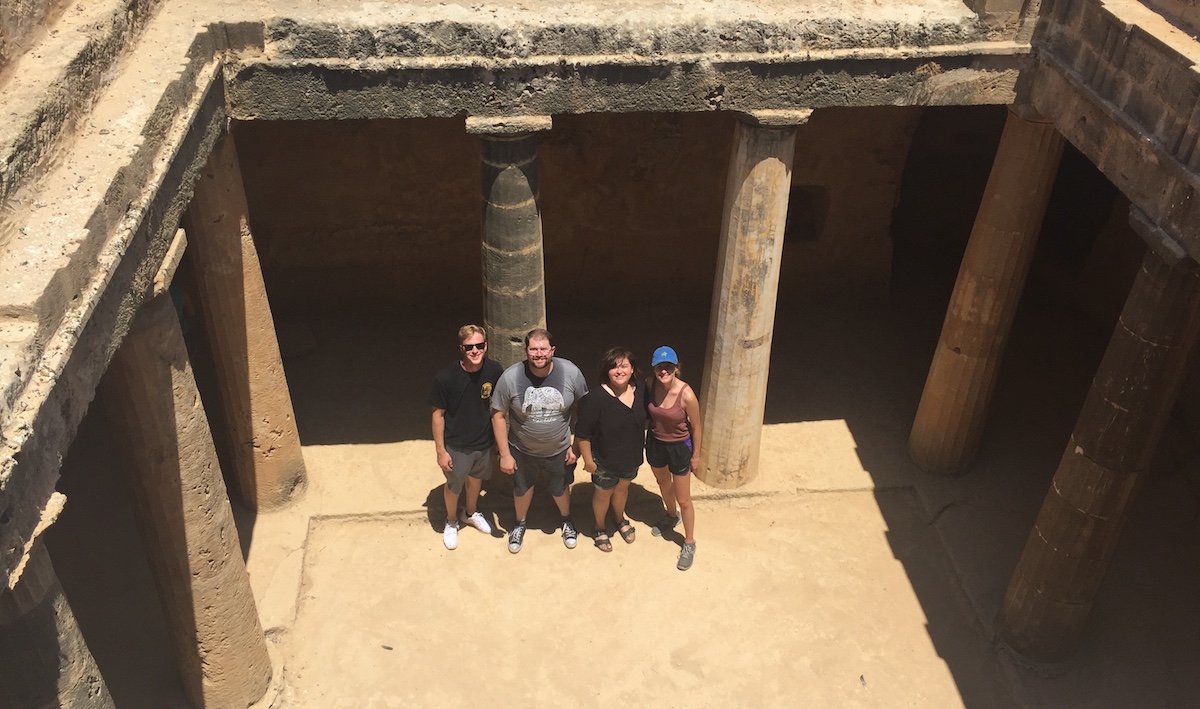 As part of the IRES program, students visited cultural sites around Cyprus including a trip to the Tombs of the Kings in Paphos-Cyprus from the fourth century B.C. Photo courtesy of Emma Pedersen