The sky is no longer the limit for scientific research

Spaceflight providers and scientists are accelerating biomedical discoveries in microgravity

“Developing the Commercial Spaceflight Research Marketplace: Challenges, Solutions and Benefits,” held this fall and sponsored by ASU’s Biodesign Institute and NewSpace Initiative, drew not only a cross section of Arizona’s university-based space life sciences and technology researchers, but also business partners and members of the Commercial Spaceflight Federation, including Blue Origin, Boeing, Techshot, Space Tango and the International Space Station U.S. National Laboratory, as well as representatives from the government sector including NASA. 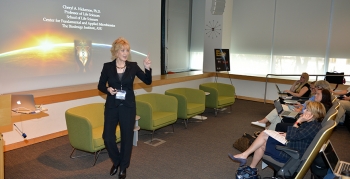 The event was held in connection with the Commercial Spaceflight Federation (CSF), an organization that promotes the development of commercial human spaceflight and works to inspire and engage scientists, students, civilians and businesses in spaceflight research. ASU joined the federation in 2012. ASU is quickly becoming a hub for spaceflight activities and research advancements that will drive the marketplace and expedite innovative discoveries and translational breakthroughs in diverse biological and technological domains.

Keynote speaker Cheryl Nickerson, a professor at the Biodesign Center for Fundamental and Applied Microbiomics and ASU’s School of Life Sciences and a principal investigator on multiple NASA spaceflight missions, kicked off the program by highlighting the value of spaceflight life sciences research for innovative biological and technological discoveries that can drive the commercial spaceflight marketplace. She encouraged participants to incorporate the microgravity environment of spaceflight in their research.

“We are igniting a paradigm shift to solve major human health and environmental challenges,” Nickerson said. She explained that the unique microgravity environment of spaceflight offers a promising platform for discoveries that will globally advance human health and quality of life in ways that cannot be obtained using traditional experimental approaches on Earth, where the force of gravity can mask key biological responses.

Nickerson’s team focuses on improving human health on Earth and the health of astronauts during spaceflight missions by mitigating infectious disease risks. With more than 20 years of research experience with microbial pathogens and 3D tissue-like constructs that mimic human physiology, Nickerson and her team have conducted nine biomedical research experiments on NASA spaceflight missions.

In a landmark experiment, Nickerson’s team observed that the foodborne pathogen salmonella alters its gene expression and virulence (disease causing ability) in a manner that is different from when it is grown on Earth.  Her team has also investigated the response of other pathogens to spaceflight culture and has developed advanced 3D human tissue culture models as predictive disease platforms.

Citing infectious disease as the world’s No. 1 killer of children and young adults, along with the antibiotic resistance crisis which threatens effective microbial treatment, Nickerson said, “We urgently need new ways to outpace infectious disease. Spaceflight research has already delivered novel insight that may lead to new opportunities to combat infectious disease on Earth and in space, as well as breakthroughs in tissue engineering, regenerative and personalized medicine, and new approaches to control biofilms and biocorrosion in industry and health.

“The microgravity environment on the International Space Station creates technical and logistical challenges for life sciences research,” Nickerson said. “While this environment is challenging and requires technical innovation, the results are well worth it.”

ASU has a long history of achievement in the space life sciences field, including research that laid the foundation for use of the microgravity research platform for modern microbiological research in spaceflight and commercial spaceflight vaccine development initiatives. In addition, ASU is conducting major research into biofouling of spacecraft life support systems, protein crystallization and advances in microbiome and tissue engineering research. These efforts in space life sciences complement other ASU space initiatives in robotics, planetary and astronomy investigations. 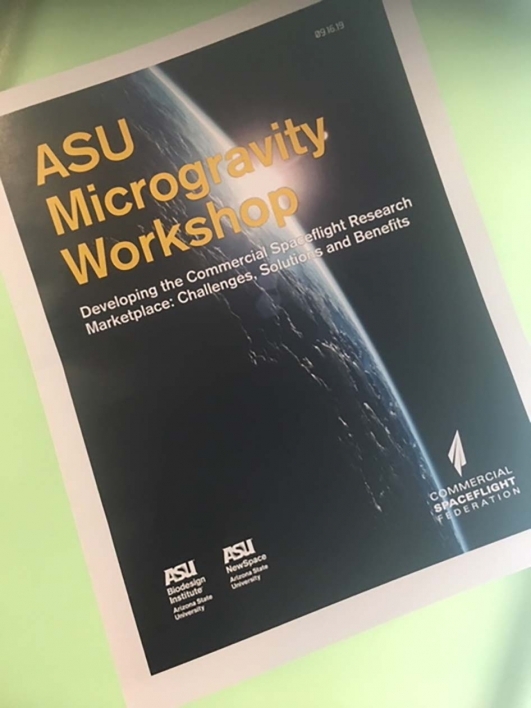 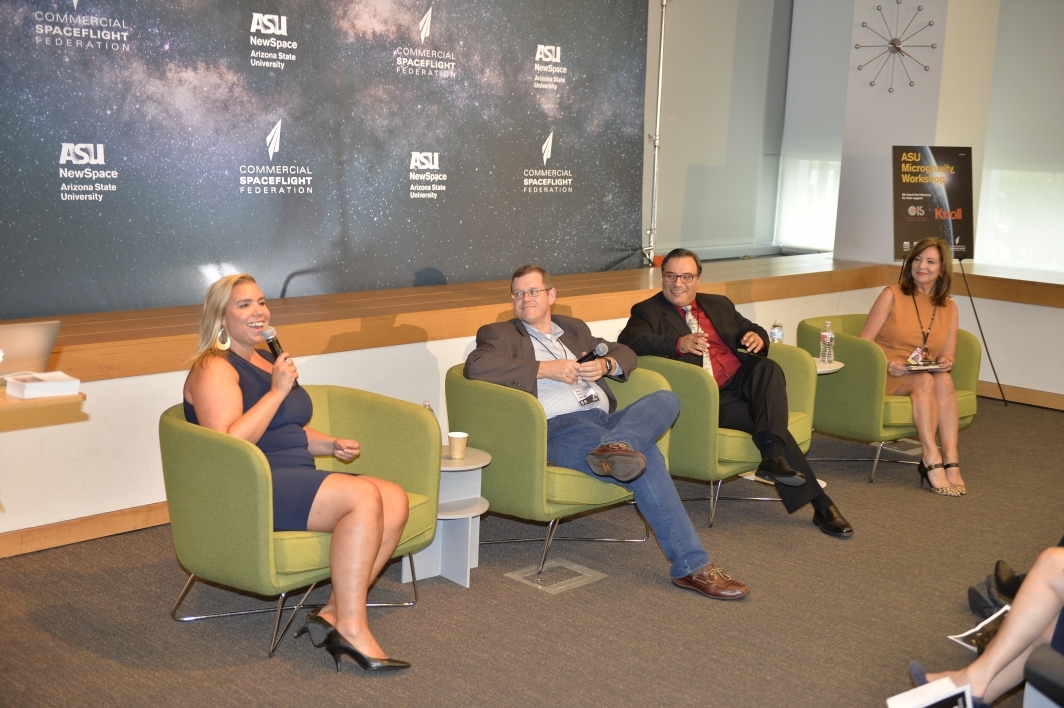 Growing the field: what’s it going to take?

Where space science was once the province of a small group of select researchers, the advent of commercial space flight companies has created previously unimagined opportunities to conduct microgravity research at virtually every level, from grade school to research institutes to industry.

Scott Smas, program manager for ASU’s NewSpace Initiative and lead coordinator for the event, explained that with the current momentum of private sector space exploration and technology efforts, the space race is evolving quickly.

“We are on the brink of seeing commercial space tourists experience the feelings of the thrust of a rocket ignition, the intense view of the curvature of Earth and weightlessness of microgravity,” he said. “These private companies are also increasing capacity for researchers as well. A wave of new technologies and biomedical advances can be envisioned that will expand access to this sector for all.”

Erika Wagner, payload sales director for Blue Origin, said, “We are doing this work to make our world a safer place. We are doing research in space as a way to improve our understanding of challenges that face us here on Earth.”

Jennifer Barrila, assistant research professor with the Biodesign Center for Fundamental and Applied Microbiomics, discussed the challenges of preflight life sciences experimental optimization that must be done by researchers in their labs prior to launching spaceflight experiments, underscoring the important marriage between researchers, spaceflight hardware developers and launch providers.

Safety is of critical importance. “Astronauts are working with microbial pathogens and harsh chemicals in the same environment where they eat, sleep and work,” she said. “Imagine you are an astronaut doing a salmonella experiment in your kitchen.”

Techshot, Inc., a spaceflight payload developer, works closely with the Nickerson lab to engineer equipment (hardware) used in their biomedical research on space missions and to help them optimize their experiments.

“So when you talk about payload developers, they don’t just build your hardware,” said Rachel Ormsby, aerospace engineer with Techshot, Inc. “They’re a partner with you in this experiment from beginning to end. We start and end with the science. Our engineers love to talk to investigators. Something you think is insignificant could be critical to hardware design.”

Millions of people will be living and working in space, according to Erika Wagner, business development manager for Blue Origin. Her company is creating reasonable space vehicles that lower the cost of entry to space, increase the reliability of entry to space and change the game of who plays.

Jana Stoudemire, commercial innovation officer at Space Tango, sees space research as the next Silicon Valley. Citing suborbital flight and new launch vehicles emerging, she said there will be “a new definition of global, meaning not all around the planet but also above.”

Enthusiasm about Arizona’s commitment to aerospace and space flight ran high, with Stephen Fleming, vice president for business initiative at the University of Arizona, saying, “You look at the level of investment that’s in place at ASU and at the University of Arizona at Tucson, and at Northern Arizona University up in Flagstaff — and even some nonprofit institutions like the Planetary Space Initiative down in Tucson: Arizona has one of the largest — if not the largest — concentrations of space scientists in the world.

“There’s an enormous amount of scientific and technical capabilities at both the two primary campuses here in Tempe and down in Tucson,” he said. “The generation of students we are educating now and the postdocs now — they are the ones who are going to be PI’s for the next decades. It’s a wonderful time to be in the space science business.”

Lindy Elkins-Tanton, managing director of ASU’s Interplanetary Initiative, principal investigator for Psyche Discovery Mission with NASA and professor at ASU’s School of Earth and Space Exploration, shared her enthusiasm for this opportunity that “shows the breadth of all of our interests and the way we can all move together into a better space future.”

Letting the world in on what we know

Andrea Gawrylewski, senior science communication editor for Scientific American, urged researchers to embrace opportunities to tell the public and the press about their work. According to a Pew Research report, the public trust in scientists is growing and exceeds that of even religious leaders.

“So this gives scientists a platform, a voice, a position of power to influence what people think and the direction policy goes, the direction that the view of science goes,” she said.

“People who understand science and who are educated about how science works see the value in it; see what it brings to their everyday lives, and it has a snowball effect,” she said, explaining that they are more likely to elect leaders who support science and fund science.

She emphasized the importance of preparing talking points in advance, especially before an interview with reporters, and clearly communicating the implications that research has for society. She shared the growing influence of social media and explained that journalists rely on social media for much of their information, urging scientists to get involved.

Gawrylewski joined a panel of science journalists composed of Jeff Foust, senior staff writer at SpaceNews, Tariq Malik, editor-in-chief of the online publication Space.com, and Dianne Price, science communicator at the Biodesign Institute, during which the panel advised scientists on how to avoid inaccuracies, hype and sensationalism.

“’Something amazing everyday’ is the motto at Space.com,” said Tariq Malik, sharing that his publication especially enjoys using videos to explain scientific research.

The panel called on conference attendees to be proactive in their work with journalists to be more effective in communicating the value of science to the public.

ASU pumps up the possibilities

At the event, Nickerson announced the launch of a new ASU Space Life Sciences Initiative, a multidisciplinary effort designed to advance collaborations and partnerships among academic, government and commercial entities. Already the enterprise has played a major role in the Nature-NASA conference on the “Microbiology of Human Spaceflight” held at the NASA Johnson Space Center and a Lunar Mars Habitat Initiative with the University of Arizona to develop a ground-based spaceflight habitat where researchers will be able to conduct experiments to benefit astronaut health.

At the direction of ASU President Michael Crow, Nickerson will co-direct the initiative with George Poste, Regents Professor in the School of Life Sciences and the Del E. Webb Professor of Health Innovation. Poste is also chief scientist with the Complex Adaptive Systems Initiative at ASU.

The workshop concluded on a high note, with participants hungry for more opportunities to work together, including a request for ASU to host a followup microgravity workshop.

Smas said, “Gatherings like this help us identify new opportunities for collaboration with ASU and ways the commercial space sector can partner with our ASU academic community to develop solutions to support our research challenges.”

Heavyweight Cohlton Schultz finished as the Greco-Roman 130 kg champion on Saturday, while Zahid Valencia advanced to the championship round at the U.S. Olympic Trials Qualifier. ... Heavyweight Cohlton Schultz finished as the Greco-Roman 130 kg champion on Saturday, while Zahid Valencia advanced to the championship round at the U.S. Olympic Trials Qualifier.