Expanding self-determination, ensuring national sovereignty and nurturing democratic norms and institutions in new and transitioning democracies have long been foreign policy goals of the United States and its allies in the West.

Members of the American foreign policy community gathered to discuss regional hotspots related to these goals at Arizona State University’s Barrett O’Connor Center in Washington, D.C., on Sept. 3. The dinner, hosted by the McCain Institute for International Leadership, focused on security concerns in the Caucasus region and Georgia’s potential entrance into NATO.

“This discussion with representatives from Congress, the executive branch and think tanks and academia is critical for maintaining the strong account of Georgia's NATO-integration process,” said David Bakradze, the ambassador of Georgia to the United States. Georgia first expressed interest in joining NATO in 2008, though its potential membership has been opposed by some in the region, including Russia.

“We need to be brave and strong, and we need to do what is right, and we need to get Georgia into NATO,” said Sally Painter, co-founder of Blue Star Strategies, an international relations firm based in Washington, D.C.

Ambassador Bakradze regarded the evening as one part of a larger effort to win support for Georgian membership.

“Georgia will maintain its strategic readiness for its membership, because geopolitics change,” he said. “And I am really confident that at some point we will have the geopolitics in Europe when all the member states on a concessional basis will support Georgia's membership in NATO.”

Painter emphasized that Georgia will need to have advocates to successfully join NATO.

“Right now, we need to get a whole new generation of young people focused on NATO and understand that the most important relationship is the trans-Atlantic relationship,” Painter said. “And we, as the trans-Atlantic countries, when we get together and agree, we can solve any issue, whether it's North Korea or Iran or climate change.”

Luke Knittig, director of communications for the McCain Institute, also had high hopes for the dinner. He believed that face-to-face conversations and in-person convenings were more important than ever for accomplishing increasingly complex foreign policy objectives.

“You can already see people striking relationships, people that have never met, growing and bonding and becoming connected, and that's happening right here at the Barrett O'Connor Center,” Knittig said. “And that's how you get results. That's how you get outcomes — when you have people that are interested in progress getting to know each other. Together, they can find a way.”

Editor’s note: This is part of a series of profiles for fall 2019 commencement.Aidan Bjelland always enjoyed building with LEGO bricks and dreamed of a career in architecture.When he got to Central Arizona College, Bjelland saw more opportunities in civil engineering. He transferred to Arizona State University due to its well-regarded engineering program.Bjelland conducted undergraduate resear...

Aidan Bjelland always enjoyed building with LEGO bricks and dreamed of a career in architecture. 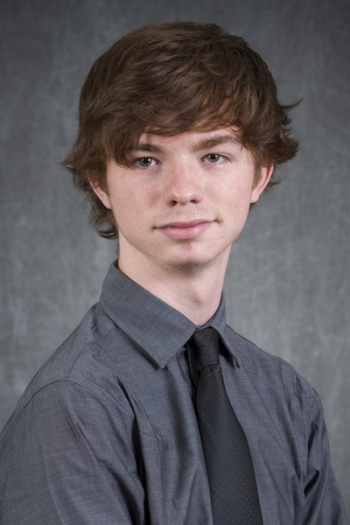 When he got to Central Arizona College, Bjelland saw more opportunities in civil engineering. He transferred to Arizona State University due to its well-regarded engineering program.

Bjelland conducted undergraduate research through the Fulton Undergraduate Research Initiative with President’s Professor Keith Hjelmstad and Lecturer Kristen Ward, studying how to induce structural stability in systems affected by earthquakes. He built digital and physical models of buildings in earthquake conditions to observe the effects.

Bjelland says Hjelmstad was also his most impactful professor.

“He has always been someone who I could talk to during my undergraduate experience and bounce ideas off of,” Bjelland said. “Ultimately, he’s given me more mentorship than I could have ever hoped to receive by someone of his caliber and for that, I am deeply grateful.”

Bjelland encourages students to always seek out opportunities when they present themselves. He was grateful for friends and professors who pushed, and sometimes shoved, him into opportunities to get him out of his comfort zone.

“At the end of the day, I learned that the worst thing someone can say to you is no,” he said, “whereas in the best-case scenario you could gain the experience of a lifetime.”

Bjelland also discovered a passion for education during his undergraduate years.

“Being able to be an undergraduate teaching assistant has been one of the best experiences of my life, and as showed me how passionate I am about education,” Bjelland said. “I hope in the future I’ll be able to continue to assist other civil engineering students in achieving their dreams like I’ve been assisted in achieving mine.”

Read about other exceptional graduates of the Fulton Schools’ fall 2019 class here.