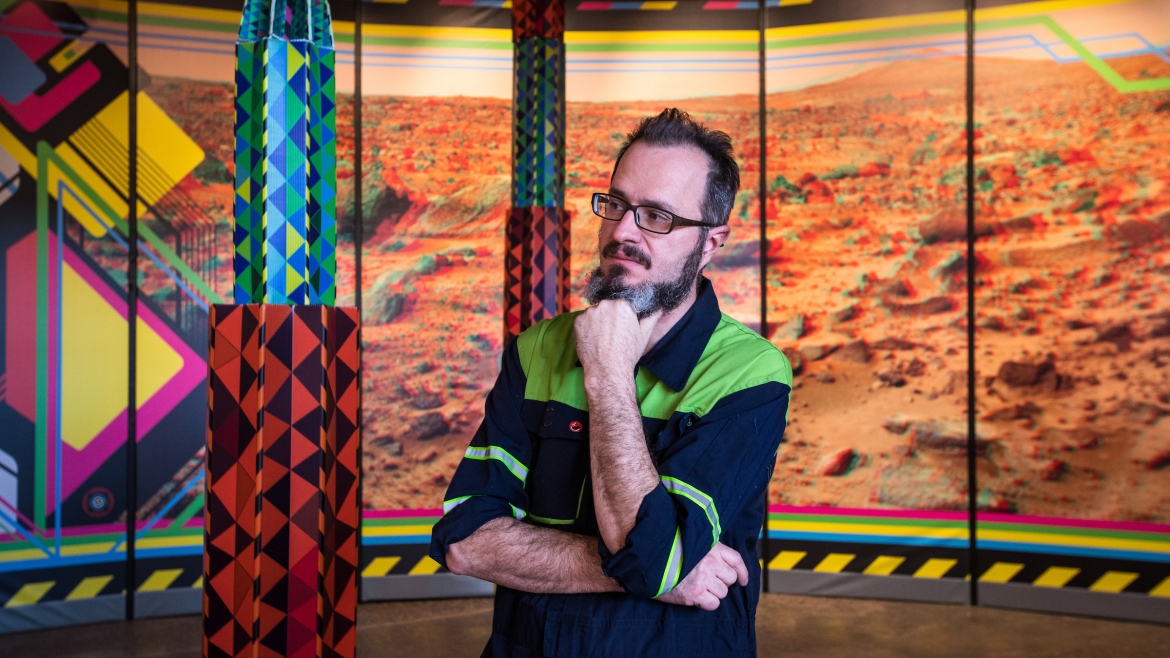 Roy Wasson Valle has had a flourishing art practice in the Valley for several years, but decided he wanted to expand his horizons, so he returned to Arizona State University to pursue a master’s of fine arts degree.

“I needed access to a new circle,” said Wasson Valle, who is graduating this month and has been named the Outstanding Graduate Student in the Herberger Institute for Design and the Arts.

Wasson Valle earned his bachelor’s degree in sculpture at ASU in 2003, and his professor from that time, Jim White, persuaded him to seek the master’s.

“He said, ‘It may open up doors you didn’t know were closed.’ And that’s absolutely true, and even further, it also revealed doors I didn’t know existed,” Wasson Valle said.

The sculptor works frequently with his wife, artist Koryn Woodward Wasson, in creating large-scale installations. Much of their work is meant for a general audience, which often means kids.

“It’s my job to make connections and present something they don’t normally see, so having it accessible to the public is important, and that it’s not necessarily in a museum space,” he said.

“It’s what I think of as a third space — not quite a store and not quite a museum. The best way for that is pubic art and then you have a real responsibility to the people who paid for it and experience it.”

One path the degree program opened for Wasson Valle led him to the Interplanetary Initiative at ASU, an interdisciplinary project to create practical methods for humans to live and work in space. He sat in on some meetings and eventually took on the project that became his master’s thesis — a vision of what a human work site on Mars would look like in the 23rd century.

His speculative “Mars Made: Retroforms” exhibit was an immersive environment that envisioned a new world. The display, at ASU’s Grant Street Studios in Phoenix, included a living and working “pod,” housed in a trailer inside the studio. Wasson Valle designed details inside the pod like scientific equipment, storage space and even stickers with a “corporate logo” on them. 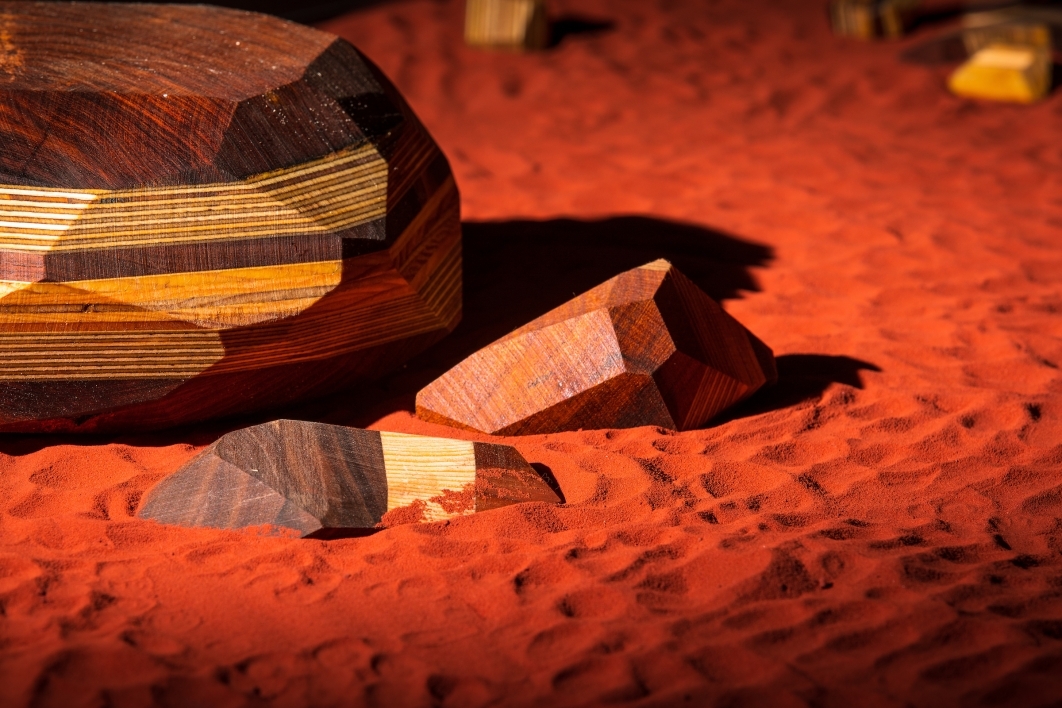 Roy Wasson Valle's exhibit included these Mars "rocks," which he made out of wood scraps he saved over the years in his own practice as well as from the wood shop at ASU. He laminated them together and sanded them down. 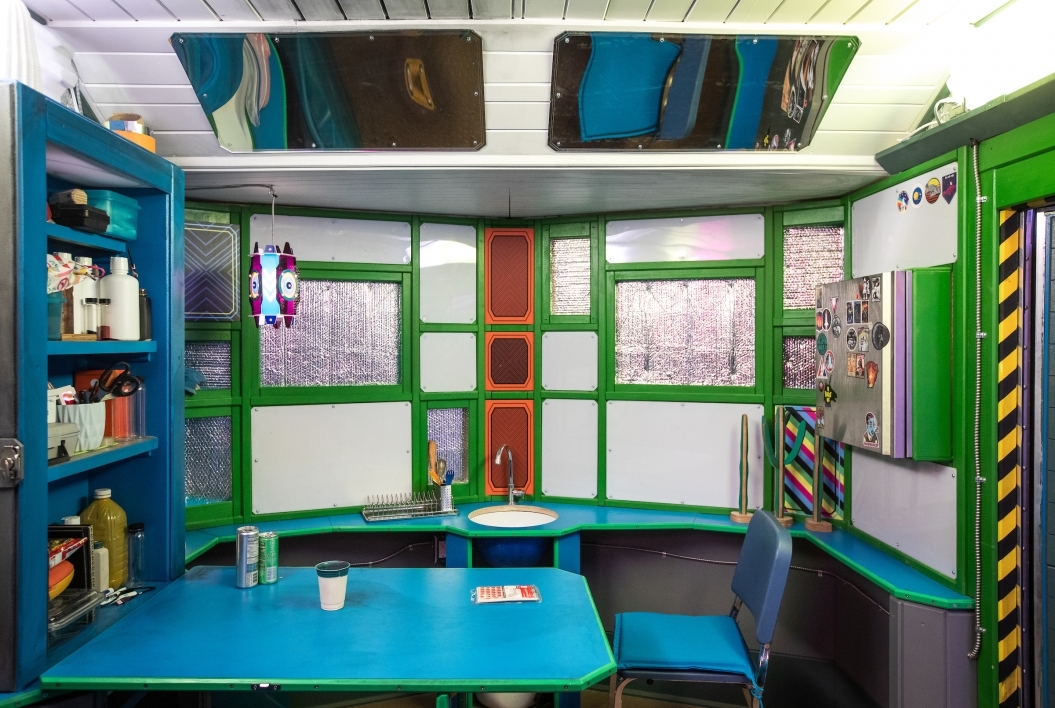 Part of Roy Wasson Valle's "Mars Made: Retroforms" exhibit was a work/live pod that he created in the studio. The lamp over the table was made on a laser cutter and incorporates an "evil eye" design. Roy Wasson Valle created "corporate logos" that would be used on a research community on Mars. The logo on the far left is based on the "Mars face" conspiracy theory, in which an outline of a face can be seen in 1970s-era photos of the planet's surface.

The other part of the exhibit imagines the surface of Mars. Wasson Valle created a huge mural in the space from a NASA photo of Mars, which he made into a three-dimensional image (when viewed through the provided 3D glasses).

The Interplanetary Initiative had some requirements for what the project should include, but Wasson Valle had freedom to speculate.

“I took the idea further into the future, where there was artist’s residency on Mars, which had a well-established community. This is the work that’s a reaction to that experience,” he said.

The exhibit included tall, colorful installations that are meant to represent saguaros.

“I saw in this idea that there would be a lot of southwest desert type of plants that could maybe survive well underground on Mars in lava tubes,” he said.

“I was very interested in transforming flat work into 3D work, so I spent a lot of time designing these columns.”

The design was printed onto lightweight, corrugated plastic, which was folded around dowels and hung from the ceiling so they spin around.

The elaborate lights hanging from the ceiling were made on a laser cutter and the pieces fitted together.

Almost everything in the show can be disassembled and stored flat.

“The more that I work on shows, the more I consider how it’s going to be stored afterward. You run out of space,” he said.

Question: You did a lot of research on Mars for this art work. What are some of the most interesting facts you discovered?

Answer: I know a lot more than I ever did but there’s so much that I don’t know. Even for me, this is inspiration to learn more. It’s supposed to inspire people to think about living and working on Mars. It’s the inspiration for new generation. The more I’ve been working on it and thinking about it, sending people to other planets is a monumental task and there’s a lot of argument about, ‘Why should we spend these resources?’ Whenever we think about how thin the atmosphere is, we start to appreciate what we have. This is to create an effort to preserve what we have.

But I do know a few facts about Mars. One of the most interesting is that there is snow on Mars and it looks like fog because the snowflakes are the size of red blood cells.

Q: What was your ‘aha’ moment when you knew you wanted to be a sculptor?

A: My father was a sculptor, so it’s in my upbringing. I was always making toys and things. He did a lot of work in a church, which is an installation where you’re thinking about how the space is being used and where all the elements will be. I was used to thinking of sculpture in a full environment, not just in a white gallery.

I’ve always done three-dimensional work. I did a lot of work on cardboard and I would cut out the pieces, paint them and assemble them. When I came to ASU I was an intermedia major because I thought I could use digital media and have more freedom. Then I took a sculpture class with Jim White and he said, ‘You should switch to sculpture because you can do whatever you want.’ For me, it really resonated and made sense.

Q: What advice would you give to someone who wants to pursue a master’s in fine arts?

A: I spent a lot of time at the Nelson Fine Arts Center, which I also did before (as an undergrad), because it’s a beautiful spot. It’s peaceful and I really like the pink walls. I’m attracted to human-made spaces that are empty.

Top image: Roy Wasson Valle, the Outstanding Graduate Student in the Herberger Institute for Design and the Arts, created the “Mars Made: Retroforms” exhibit at the Grant Street Studios in Phoenix. On the wall of the studio is a mural-sized photo of the surface of Mars, and to the left is his interpretation of a saguaro on Mars, made of lightweight corrugated plastic. Photo by Charlie Leight/ASU Now 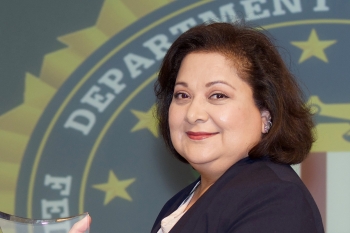 She moved to Arizona in 1981 after getting married. The next year she started her education at Arizona State University as an engineering student, but as she continued her studies, another degree caught her eye.

During her time as a student, Hussain raised four children, juggled motherhood and grandmotherhood, volunteered at her children’s schools and ran an educational nonprofit she co-founded 20 years ago called the Islamic Speakers Bureau of Arizona, which provides education about Islam and Muslims to build interfaith dialogue.

Hussain is graduating this semester with a degree in religious studies and a certificate in Islamic studies. We caught up with her and asked her about her time here at ASU.

Answer: I started out working on getting an engineering degree as I love math and physics. My “aha” moment came when I was 37 years old. I was sitting in an introductory level class for C programming with freshmen. Although I was keeping up with homework and doing well in the class, each session was difficult for me because the other students had a stronger background in coding than I did. It felt like class discussions were led by an advanced group of students who already had a background in C. I then realized that I had come to a stage in my life where I wanted my degree to be in a subject that would enhance knowledge as it relates to my career, rather than just a subject I enjoy. I changed to religious studies as I educate about religions.

A: During one of my classes, I read about an anthropologist who was observing native people and their rites and rituals around funerals. While questioning them, he was surprised at their process. When asked about how his people bury their dead, back home in the West, his description shocked and horrified the native people. This made me realize how we, as people, do things as tradition or follow religious practices without understanding or appreciating how outsiders may view them. This made the work I do with my nonprofit even more necessary.

A: I chose ASU because it is the university closest to me, but I stayed with ASU because of two amazing student advisers who have helped me navigate and stay on top of my degree through the decades.

A: Professor Agnes Kefeli Clay showed me how to approach and navigate the academic study of religion.

A: Never give up on your dream. Each setback is only a failure if you don't try again.

A: Since 1982 my favorite spot on campus has always been the Memorial Union. Even though it looks and feels very different to what it used to be, it is still the place where we can meet, eat, chat and attend events.

A: Hopefully I get accepted in a master’s program and continue studying.

A: It would be nice to say "medical research" or "save the planet" but others are already spending billions. I would keep it close to home like Robert F. Smith did for the 2019 graduates of Morehouse College. I would help pay off student loans, allowing those children and families here in our community to live the lives they dreamed of after getting their degrees. This way, instead of spending all that they earn to pay off loans they will be able to provide homes, food, clothing and health care for their families.