Practically everyone knows that Alka Seltzer tablets mixed with water are a go-to effervescent remedy for indigestion.

But did you know that a mixture of Alka Seltzer tablets and water in an enclosed cylinder can produce enough pressure to launch a rocket? 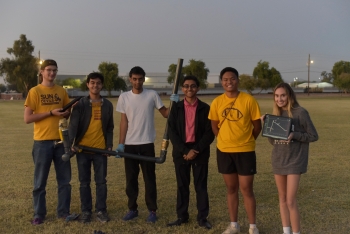 Several Arizona State University students, calling themselves the Sun Devil Alka Rocketeers, know it and are using their skills in engineering and design — and yes, their knowledge of the benefits and power of Alka Seltzer — to compete in the national 2019 Bayer Alka-Rocket Challenge. The competition pits teams from four-year accredited universities throughout the country against each other to see who can design, build and launch a rocket powered by Alka Seltzer tablets and water the highest.

Joshua Pardhe, a Barrett, The Honors College sophomore and president of the Alka Rocketeers, founded the organization last year with three members (all engineering majors) and pushed for official student organization designation and funding through the Ira A. Fulton Schools of Engineering at ASU. The Alka Rocketeers is now an official student organization within the Fulton Schools and has 18 members with a mix of majors, including engineering, business and liberal arts. Most members are Barrett, The Honors College students.

Last year, the Alka Rocketeers was the first-ever team from ASU to compete in the Bayer Alka-Rocket Challenge. Their rocket was made out of PVC piping, a pressure chamber, a removable launch tube and a 3D printed rocket with an altimeter inside.

This year, the group has perfected its design and built a launcher out of pressure-rated PVC piping and brass valves and a rocket that was custom-designed out of ABS plastic and 3D printed at the Fulton Computing, Informatics, and Decision Systems Engineering Print Lab. They hope to launch their rocket at least 200 feet for the Alka-Rocket Challenge. In testing, the rocket reached 154 feet.

Participants in the Alka-Rocket Challenge go through two rounds of competition that run concurrently. One round requires participants to submit a video and a document explaining how they built their Alka-Rocket, any challenges they faced and how they responded, and showing their rocket in action. A professional panel of judges chooses four finalists, each one representing a census region of the United States.

The other round of competition involves a public voting period where a photo of each participating team is posted on Facebook and each “like” on the photo counts as a vote for that team. The team with the most “likes” will become the fifth finalist.

The five finalist teams, which will be announced Nov. 18, will win a trip for four team members to the Kennedy Space Center in Florida to compete with other teams to see whose rocket can fly highest.

The Alka Rocketeers are hosting several events to promote their project and ask for votes:

• Rocketpalooza, ASU’s first-ever rocketry expo with music, food, and games, will be held 6 to 8 p.m., Nov. 8, at the Sun Devil Fitness Center on the ASU Tempe campus.

Rocketpalooza will feature volleyball and dodgeball tournaments, with the winning teams entered into a raffle for an Airpod giveaway. Students interested in participating can register at http://bit.ly/Rocketpalooza2019Volleyball or check in at the event and be assigned to a team. The Alka Rocketeers’ rocket will be on display and launched several times throughout the event. Alka Rocketeers will be available to share information about their organization and how others can join the group.

• Puppies and Propulsion, an event where students can pet puppies and learn about the Alka Rocketeers and its rocket, will be held 2 to 4 p.m., Nov. 12 in Palm Court, located at the main entrance of Barrett, The Honors College’s Tempe complex.

Returning to the Forbes stage, ASU alumna speaks to the power of DACA youth leadership

Just over 10 million people were living in the U.S. without legal immigration status in 2017. Tens of thousands are young people who received temporary protection through the federal Deferred Action for Childhood Arrivals program (DACA) after being brought to the country as minors. And as the fate of that program remains uncertain, the issues being analyzed at a policy level are the same ones imp...

Returning to the Forbes stage, ASU alumna speaks to the power of DACA youth leadership

Just over 10 million people were living in the U.S. without legal immigration status in 2017. Tens of thousands are young people who received temporary protection through the federal Deferred Action for Childhood Arrivals program (DACA) after being brought to the country as minors.

And as the fate of that program remains uncertain, the issues being analyzed at a policy level are the same ones impacting lives around the country in real time. At Forbes' 30 Under 30 Summit in Detroit last month, Arizona State University alumna and DACA recipient Reyna Montoya asked the audience to consider a basic commonality we all share. 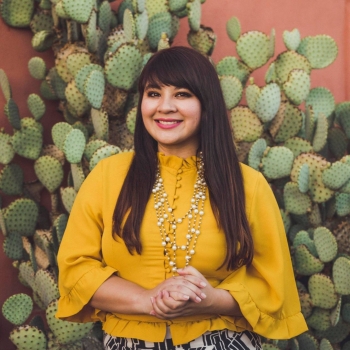 “There are thousands and thousands of children who are looking for our leadership today, and you have a choice within you to remember that they are human beings too, people like you, who breathe the same fresh air,” Montoya said. “I want to challenge you to take a moment to slow down, and breathe with me.”

Montoya was one of more than 200 keynote speakers at the October summit, the latest in a list of recognitions for her activism and humanitarian work over the years. This fall, her growing legacy will also be honored with an induction to The College Leaders. And she’s intimately familiar with immigration issues that she’s addressing as a community organizer today.

She was 13 when her family fled violence in Tijuana, Mexico, for Mesa, Arizona. Growing up undocumented, she remembers facing challenges in everything from enrolling in school to finding a job.

Despite the hurdles, she graduated with dual degrees in political science and transborder studies from The College of Liberal Arts and Sciences and a minor in dance in 2012.

DACA was enacted that same year, carving out new education pathways for Montoya and other recipients. She now holds a master’s degree in secondary education from Grand Canyon University and recently completed an executive education program through the Harvard Kennedy School of Government.

But DACA did not quell the fear and uncertainty that families of mixed immigration status still faced. Montoya’s drive to help fill that gap led her to found Aliento in 2016, a nonprofit providing art and healing workshops, educational outreach and leadership training to students and families touched by immigration issues in Arizona.

The work earned her recognition on Forbes’ 30 Under 30 list for social entrepreneurship and a Muhammad Ali Spirituality Award in 2018. Most recently, she was chosen as a finalist for the Greater Phoenix Chambers' ATHENA Awards for outstanding Valley businesswomen. And on the ground, Aliento The Spanish word "aliento" translates as both "breath" and "encouragement."has continued to grow.

Today, the organization hosts community building and resilience initiatives including a youth fellowship program, outreach to local middle and high schools and the creation of Aliento at ASU, a student-run club on the Tempe campus.

Montoya said returning to Forbes as a speaker felt like a chance to talk not just about Aliento’s growth, but about the DACA program and its recipients at large. 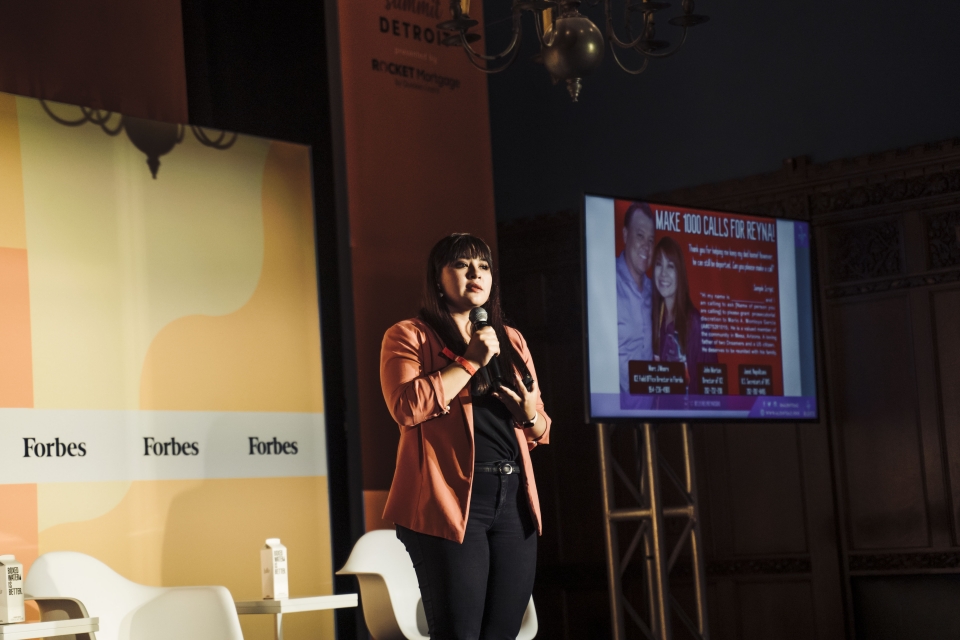 Reyna Montoya speaks at the Forbes 30 Under 30 Summit. Photo by Diego Lozano/Aliento

“It was very humbling to be asked to go back and speak, and it's validating to see that the contributions of DACA recipients are being recognized by a place like Forbes,” Montoya said. “The Supreme Court will begin hearing arguments around DACA in November, days after the summit, so I wanted to educate people about what Dreamers go through and invite them to invest in youth leadership by supporting organizations like Aliento.”

Since its founding, Aliento has helped DACA and undocumented students as young as 14 advocate for themselves to representatives at the Arizona State Capitol, and hosted seminars where families can learn more about immigration policy. To Montoya, those initiatives speak to the empowerment platform her organization is based upon.

“I think often we hear that millenials are the do-nothing generation, but I have witnessed the opposite,” she said. “I have seen young people of all ages getting involved in leadership and investing in not just their growth as individuals, but also that of the community.”

Aliento is also involved in impacting immigration policy in other ways. Earlier in October, the group appeared on an amicus brief alongside 165 universities, including ASU, urging the Supreme Court to uphold DACA.

“At the end of the day, higher education should be available to everyone, regardless of their background,” she said. “That’s why it filled me with so much pride to see my alma mater being willing to support DACA students in that way.”

Montoya originally created Aliento to give mixed-immigration-status families, students and young people the tools to navigate many of the higher education and immigration challenges she faced alone.

“I’m a firm believer that once you’re educated, no one can take away those skills and that knowledge from you,” she said. “Going to ASU, I was able to build relationships and challenge my own thinking. All of that helped me understand who I am and what I am worth — that's something I’d encourage anyone to fight for.”

As the organization continues to grow, she said some of the best reminders of its impact come from some of the youngest people it serves.

“The other day, we were at a local elementary school supporting fifth- and sixth-grade students, and one of them told me after that our workshop on identity made her feel proud to be Mexican,” Montoya said. “It gives me a lot of hope for the future hearing that we’re helping young students in that way — I didn't always have that growing up, so creating a place where they feel their voice matters is to me the best impact we can make at Aliento.”