Nobel laureate and physicist Richard Feynman wrote in 1965, “I think I can safely say that nobody understands quantum mechanics.” Quantum mechanics is now much better understood, and recently in the news the race is on for researchers and companies to develop new technology with quantum mechanics that have potential to revolutionize computing and sensing devices.

A team from Arizona State University has been awarded a Conceptualization Grant from the National Science Foundation's (NSF) Quantum Leap Challenge Institute (QLCI) program to study using one of the more unusual properties of an electron — its spin — as a medium for information storage and sensing. Vladimiro Mujica, professor in the School of Molecular Sciences, is lead principal investigator of the project. Download Full Image

Through a competitive grant process, the NSF has assembled 18 research teams from around the country to tackle national strategic needs in quantum information systems and quantum sensing.

"The increasing sophistication and miniaturization of electronic technologies,” states William Petuskey, director of ASU’s Advanced Materials Initiatives, “has now advanced to the stage of manipulating and controlling matter at the scales of individual atoms and molecules. This enables designing and building complex physical devices that takes advantage of the properties of matter that are often quite different than we are familiar with at the human scales. It is a most exciting time for science and technology.”

The ASU team has proposed a general approach for controlling and manipulating electron spin for building new fundamental operational components of quantum computers and in designing chemical and physical properties in materials with extraordinary sensitivity. Of all the physical properties of an electron, spin is perhaps the most difficult to understand, since it does not have an analogy to anything in the human-scaled world. Nevertheless, it is crucially important for the stability of matter and for the existence of magnetism.

Electron spin has only one value (½) but exists in either of two orientations, “up” or “down”. When a group of electrons has more of one of these orientations than the other, they are said to be spin "polarized."

One way to control spin polarization is by transferring them across a “chiral” medium in a phenomenon known as chirality-induced spin selectivity (CISS). The ASU team’s approach involves coupling specially designed chiral molecules to specific atomic sites on solid surfaces to take advantage of the CISS effect to revolutionize the storage of information required for the next-generation quantum computers.

Chirality, also called handedness, is the key molecular feature to make this all work. Just like your left and right hands are mirror images of each other, chiral molecules can also exist in left-handed and right-handed versions that are made up of the same atoms but are mirror images of each other. In the CISS effect, electrons that transfer across a right-handed molecule generates spin polarization in the direction of electron movement, whereas transfer across left-handed molecules generates spin polarization in the opposite direction. Many important biomolecules, including DNA and proteins, are chiral. Depositing oriented layers of chiral molecules on the surfaces of materials forms special interfaces with unique properties, where spins can be manipulated in a controlled way and transferred from electrons to nuclei to create novel structures for the strategically important fields of quantum storage and quantum information.

“We will study how to use chirality as a basic molecular design strategy to control the generation and transfer of spin at molecule-solid interfaces,” said Vladimiro Mujica, professor in the School of Molecular Sciences and lead principal investigator of the project.

The QLCI program is part of the NSF's Quantum Leap "Big Idea" project. The funding will be used to conceptualize the Institute for Chiral-Quantum Materials Interfaces (ICQMI) at ASU and is meant to create a national community focused on innovations for quantum computing and quantum communication. A high priority will also be given to addressing strategic national needs for workforce training in this emergent field.

Controlling spin makes possible the generation of qubits, which are the basic units of quantum computing and have important potential applications in quantum information, quantum sensing and quantum storage applications. Other potential real-world applications of this research are in the information, pharmacological and sensing industries.

"We are especially excited by the opportunity that this grant gives us to build a network of researchers who come from different disciplines from across the country. We expect to get a lot of new ideas coming from getting everyone together and talking to each other,” said Qing Hua Wang, assistant professor in the School for Engineering of Matter, Transport and Energy, and a co-principal investigator on the project. 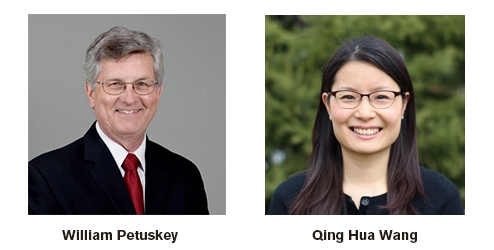 The initial team includes researchers from ASU’s School of Molecular Sciences, Department of Physics, the Biodesign Institute and the Ira Fulton Schools of Engineering, and the University of California at Davis, and it is anticipated to grow as the project advances.

Planning events at ASU? Watts College has you covered

Does your boss ask you to plan your department team builder? Is it all hands on deck when your team hosts a conference or workshop? Do you secretly have no idea what you are doing?ASU offers a Special Event Management certificate through the School of Community Resources and Development, in the Watts College of Public Service and Community Solutions. In this six-class certificate program, you will...

Planning events at ASU? Watts College has you covered

Does your boss ask you to plan your department team builder? Is it all hands on deck when your team hosts a conference or workshop? Do you secretly have no idea what you are doing?

ASU offers a Special Event Management certificate through the School of Community Resources and Development, in the Watts College of Public Service and Community Solutions. In this six-class certificate program, you will learn the tools to become a confident and successful event professional. ASU employees can use qualified tuition reduction. Most courses are offered on the Downtown Phoenix campus one night a week with an online class available over the summer. The program also includes site visits to local venues and businesses, guest speakers and the opportunity to plan and execute your own event.

Classes are aligned with the academic calendar and begin in January. Visit the program's website for more information or email scrdadvising@asu.edu to speak with an adviser.