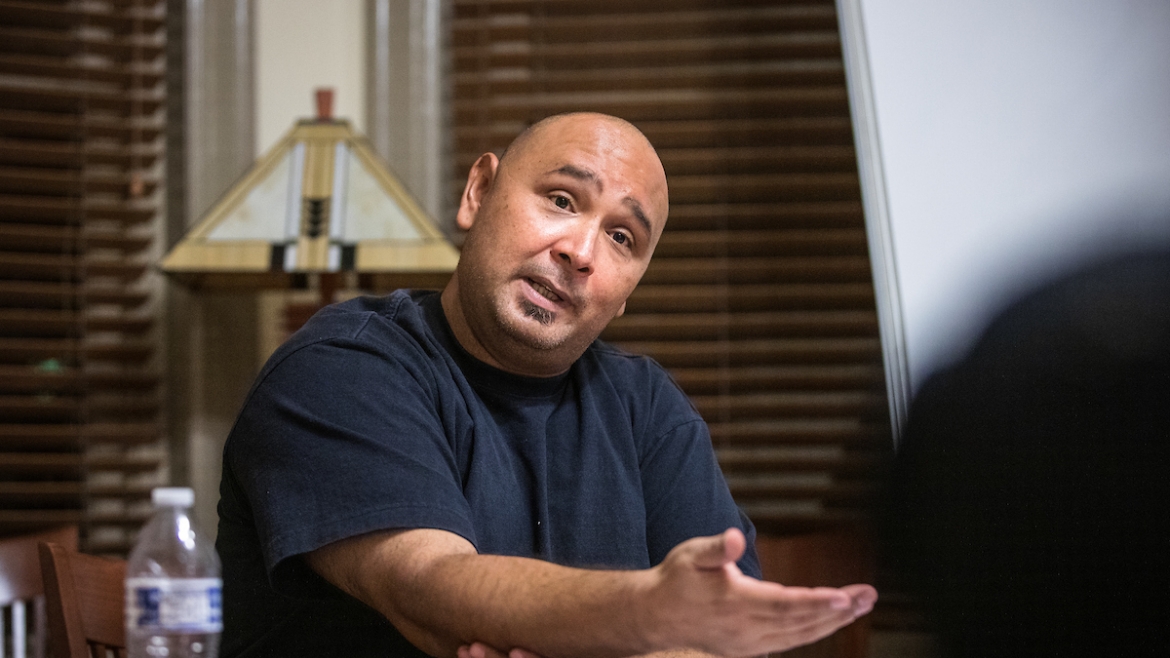 Hemingway. Salinger. Whitman. All legendary writers who once served in the military.

Some of the greatest American literature has come from the pens of former soldiers, and Arizona State University student veteran Marco Piña has a theory as to why.

“The key is life experience, because the military gives veterans a unique perspective about life because of the exposure to many different situations and people,” said Piña, an Air Force veteran who is a facilitator of ASU's Veterans Writing Circle. “Our veterans have so much to teach to a society that is increasingly becoming more divided because they know how to put differences to the side in order to achieve a common goal.”

Piña said the group has been meeting monthly since September at the Virginia G. Piper Center for Creative Writing on the Tempe campus. The idea is to offer ASU’s student veterans a place where they can find support and share their past experiences through creative writing.

“We need the veteran voice now more than ever,” said Piña, a screenwriter who holds a Master of Fine Arts in poetry from the Department of English in The College of Liberal Arts and Sciences. 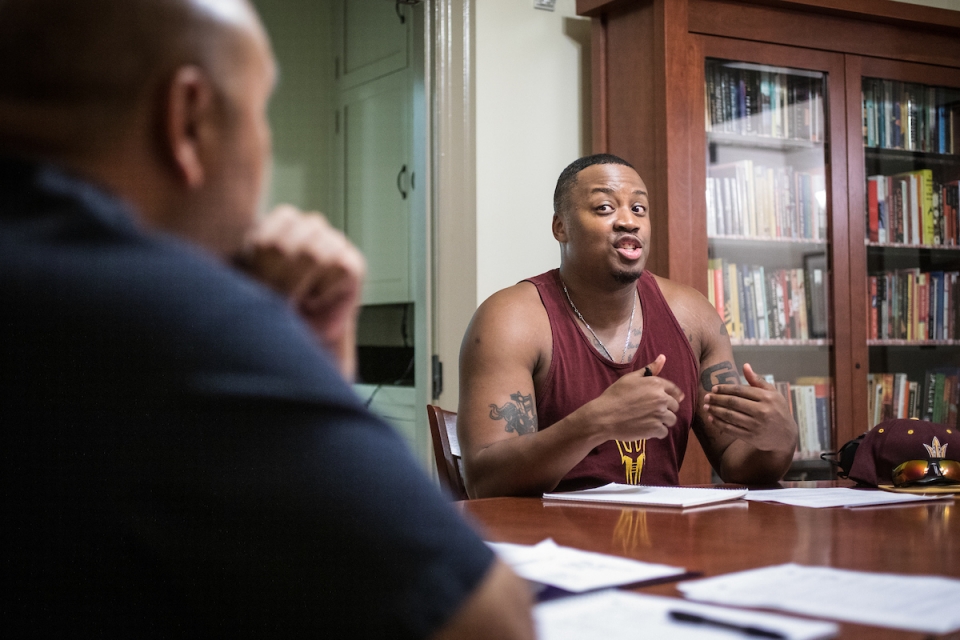 Army veteran and film and media studies senior Sterling Williams talks with facilitator and Air Force vet Marco Piña at the monthly meeting of the Veterans Writing Circle workshop for military-related writers at the Virginia G. Piper Center for Creative Writing. Williams is working on a screenplay involving veterans transitioning into academia. Its working title is "The Existential Crisis of the Transitioning Grunt." The group was designed to help vets tap into their creative side and get guidance for their work within a like-minded community. Photo by Charlie Leight/ASU Now

“Our office is constantly experimenting with the arts and humanities to engage veterans in creative avenues for self-exploration,” said Dallett. “My hope is veterans will find the space and the words they need to further their journeys, transitions and transformations.”

“The fact that this is a historic building creates a sense of quiet and reflection, and (it) is charged with that type of energy,” McDonough said. “We’ve had dozens and dozens of important authors and writers come through these doors, offering up their knowledge and wisdom, which I think has sunk into the water. This is a writerly space.”

Student veteran Sterling Williams certainly felt that way. Williams, 29, is a film and media studies major in The College of Liberal Arts and Sciences and is working on a semiautobiographical screenplay titled “The Existential Crisis of the Transitioning Grunt.” He joined the group to get feedback on his writing and character development and to be around like-minded people.

“There’s not a lot of veterans who like to pursue the arts, so when I saw the opportunity, I jumped at it,” said Williams, who served seven years in the Army. “What I’m hoping to experience is that same brotherly bond I had in the service. I’ve been out for more than a year, and that’s hard to find. After the last meeting, I got a little of that back.” 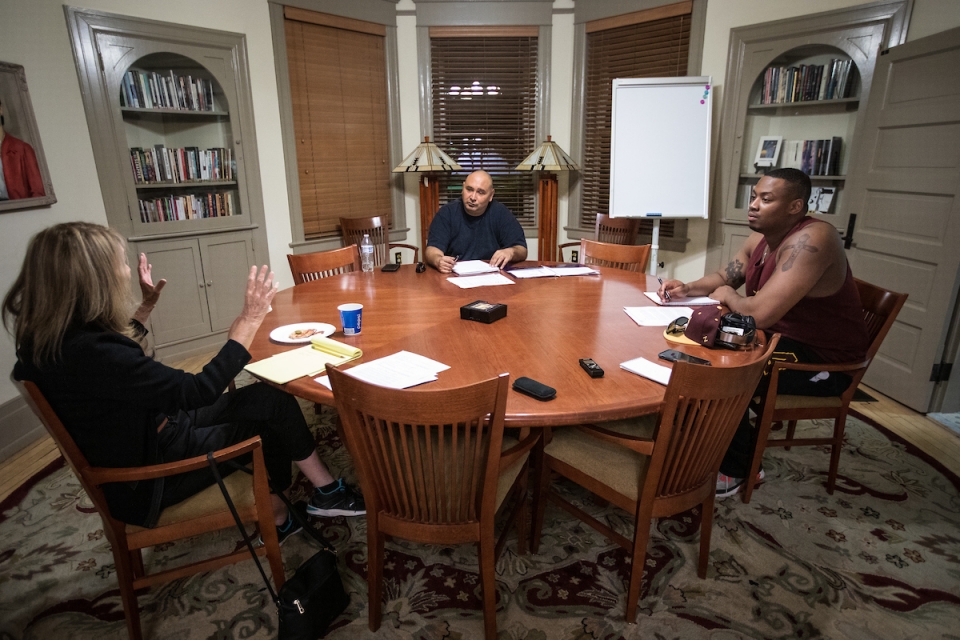 ASU alum Karen Logan came to an Oct. 22 meeting for the opposite reason — she wanted to give back to veterans.

“I wanted to do something for that veteran community that would make my dad proud,” said Logan, whose father conducted secret missions to England and Germany for the Air Force in World War II. “I like hearing their stories, and they talk to me about their episodes. Often they want to know how to get started with their memoirs and I help them.”

Logan is a retired history, science and business teacher who sells real estate and devotes her spare time to veterans causes. But she was also there to get feedback on her fictional series about a New York mafia princess coming out of the United States federal witness protection program. It’s called “Alphabet Wars.”

The native New Yorker said the six-book series is based on true events from the 1970s and 1980s.

“I kinda lived it a little bit because my father was a member of the Teamsters and owned booking parlors,” Logan said. “Most fiction is based on real life experiences.”

Which circles back to what Piña firmly believes — veterans make great writers because of their life experiences.

“Each shared experience with a veteran is a lesson in humanity,” Piña said. “My dream job is to help other vets find that kid inside or to wake up dormant dreams so they can realize that they do not need planes or helicopters to fly.”

Jamie Ruden scored a team-high 14 points, and was one of four Sun Devils who scored in double figures. ... Jamie Ruden scored a team-high 14 points, and was one of four Sun Devils who scored in double figures.