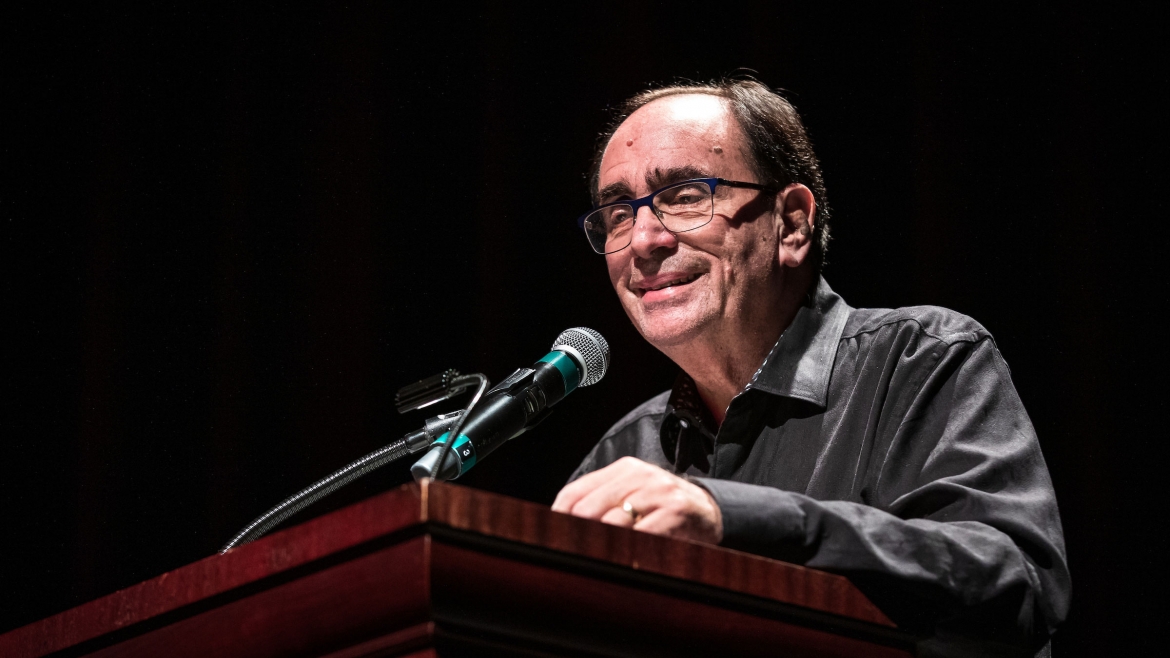 T’was the night after Halloween, when all through the town, the jack-o'-lanterns had dimmed and the candy been downed. Yet at the Phoenix Orpheum Theatre, the spooky spirit was still to be found.

On Friday, Nov. 1, iconic children’s horror author R. L. Stine took the stage to the delight of more than 600 children, parents and community members whose enthusiasm for his work spanned generations. Over the course of an hour, Stine regaled the audience with a reading of fellow children’s author Shel Silverstein’s poem “Haunted,” fan letters, stories from his own life and answers to their most burning questions.

Stine’s visit was made possible through a collaboration between Arizona State University’s Virginia G. Piper Center for Creative Writing, Phoenix Fan Fusion, Changing Hands Bookstore and Burton Barr Central Library. He is one of this year's featured speakers in the Piper Center's Distinguished Visiting Writers Series.

ASU Dean of Humanities Jeffrey Cohen, no stranger to the genre himself, introduced Stine with a story about his daughter, who he said was “addicted” to the author’s internationally best-selling series “Goosebumps.” According to Cohen, he awoke one night to his daughter standing over him, watching him sleep. If that weren’t creepy enough, she then proceeded to recount to him the frightening things she’d read that were keeping her awake.

After putting her back to bed, Cohen snuggled back up in his own — only to find himself now wide awake with fear.

“He owes me a lot for the insomnia,” Cohen said of Stine, adding more seriously that it’s just further proof of how Stine “has taught us over and over again how powerful the written word is.”

Ironically, despite his unmatched success as a children’s horror author (Stine was the best-selling author in America for three years in a row, from 1993–95, and Guinness World Records cited him as the best-selling series author in history), Stine never wanted to be scary. 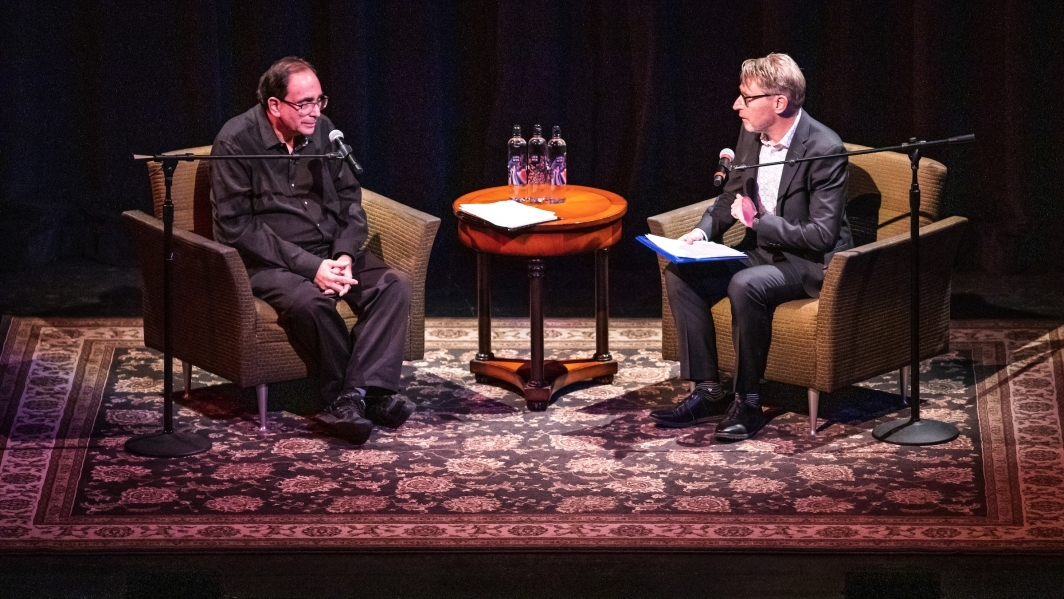 Prolific children's horror author R. L. Stine spoke with ASU Dean of Humanities Jeffrey Cohen about his long and successful career on Friday, Nov.1, at the Orpheum Theatre in Phoenix. 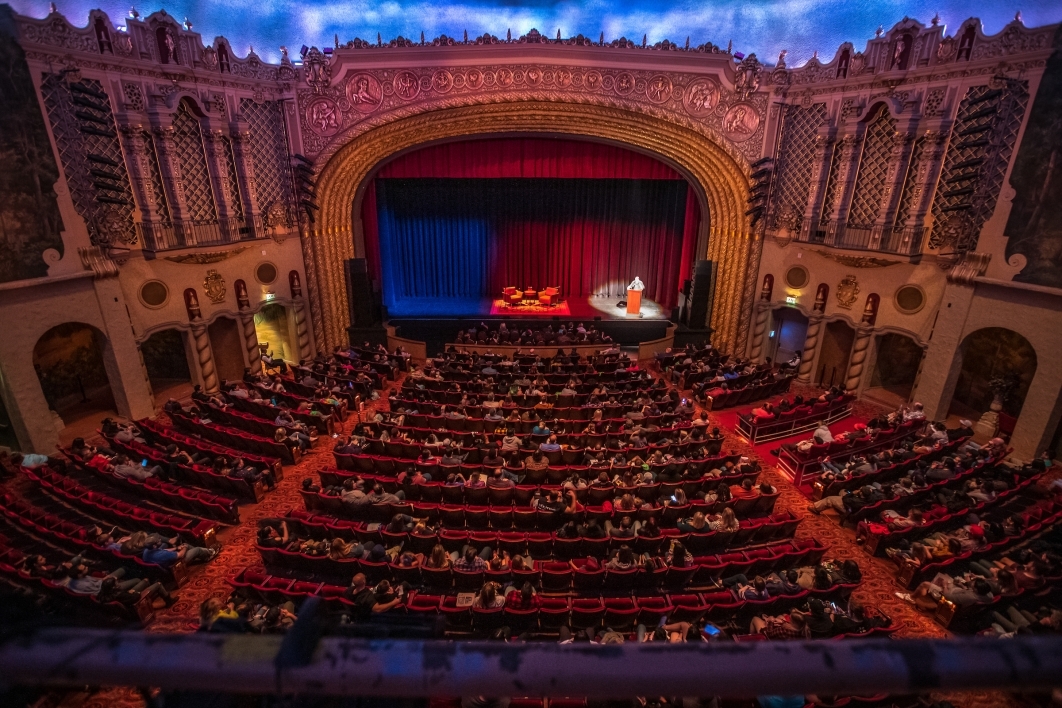 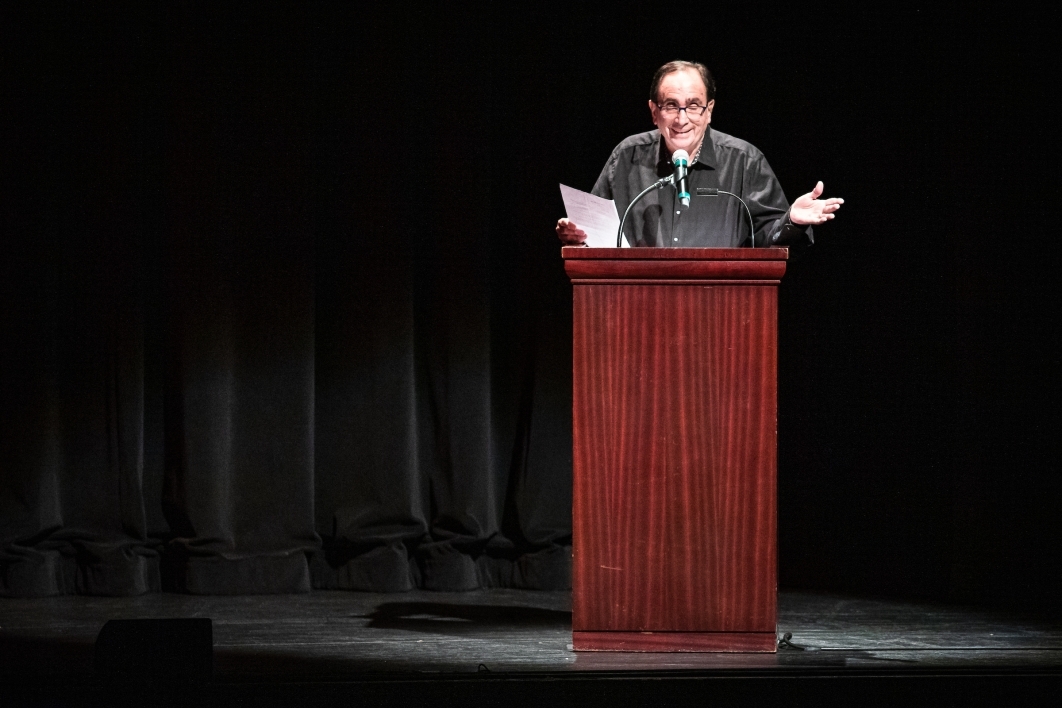 Stine regaled the audience with a reading of fellow children’s author Shel Silverstein’s poem “Haunted,” fan letters, stories from his own life and answers to their most burning questions.

“That was an editor’s idea,” he said. “So to be sitting here today is unbelievable to me.”

Stine initially wrote funny books for children and later created the humor magazine “Bananas,” which Cohen subscribed to. His affinity for joking around came through often at Friday’s event; almost no anecdote ended without a punchline.

In greeting the crowd, Stine told them he was especially glad to be there, considering he’d just come from a book signing in New Jersey where the kids thought he was dead.

Though he never foresaw a future in writing horror, Stine did always want to be a writer. More accurately, he wanted to be a comic book author, but he couldn’t draw. So instead, he spent whole days in his room as a child typing on a typewriter, and his mother would yell at him to go outside and play.

“That was the worst advice I ever got,” he said.

Thankfully, he didn’t listen. As Stine got older, he went from being a “comic book freak” to reading Ray Bradbury and other sci-fi and fantasy authors.

The most common question Stine is asked is where he gets his ideas from. Fair enough, seeing as how he has published literally hundreds of books. He doesn’t have a good answer, though; he’s never seen a ghost (but he’s always looking) and the only book to ever be inspired by a real life experience is “The Haunted Mask.”

As the story goes, Stine’s son Matt was very young when he tried on a green, rubber Frankenstein mask and couldn’t get it off. Stine joked that instead of helping his son, he ran to make note of his idea.

He also enforces a strict policy of writing 10 pages a day.

“Sometimes it feels like I’m writing uphill,” Stine said, but he knows he can always go back and make it better later.

And he’s showing no signs of slowing down. Recently, Stine saw his comic book dreams come true when he partnered with artists Kelly and Nichole Matthews to publish the first of a new four-volume graphic novel horror series, “Just Beyond.” And next summer will see the release of three movies based on books from his “Fear Street” series.

Asked if he would ever consider writing for adults, Stine was resolute: “No.”

“Why would anyone want to?” he asked. “I have the best audience there is.”

Lester Holt, the award-winning anchor of “NBC Nightly News” and “Dateline NBC,” accepted the 2019 Walter Cronkite Award for Excellence in Journalism on Monday from Arizona State University.Calling the Cronkite Award an honor, Holt said these times demand clarity, fearlessness and reporting that exposes and cuts through assaults on the truth. “Rather than lick our wounds, this is journal...

Calling the Cronkite Award an honor, Holt said these times demand clarity, fearlessness and reporting that exposes and cuts through assaults on the truth. 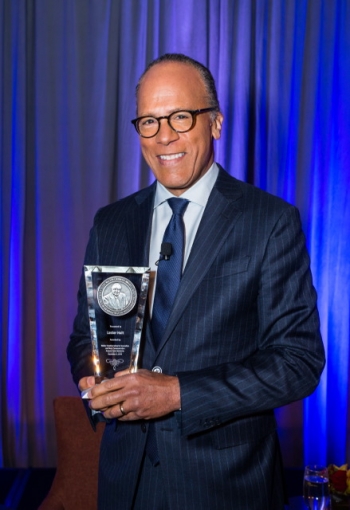 Lester Holt was honored with the 36th annual Walter Cronkite Award for Excellence in Journalism on Nov. 4, 2019 at the Sheraton Phoenix Downtown. Photo by Ashley Lowery Download Full Image

“Rather than lick our wounds, this is journalism’s time to shine, to shine a light in dark places as we never have before, and to hold individuals and institutions of power accountable,” Holt told a crowd of more than 1,000 media, business and community leaders, Cronkite School supporters and students. “That’s what we do. That is our calling. That is what we will do.”

ASU Provost Mark Searle presented Holt with the 36th annual award, given by the Walter Cronkite School of Journalism and Mass Communication. The award recognizes distinguished journalists who embody the values of the school’s namesake.

When accepting the award, Holt noted that it is common at such gatherings to bemoan the current assault on journalism, a time when “low blows from the highest places are a threat to not only the First Amendment — a fundamental pillar of our democracy — but to journalism around the world.”

But this also is an important moment for American journalism, he said.

“Yeah, we’re getting knocked around a little bit, called ‘enemies of the people’,’’ Holt said. “But no one is preventing us from doing our jobs, so that’s what we need to do.”

Holt was joined by NBC News colleagues; his wife, Carol; and his oldest brother, Mike, and his wife, Susan, who live in the Valley.

Also in attendance were Chip Cronkite and Walt Cronkite, the son and grandson of Walter Cronkite. Special guests included members of the Howard family and executives of the Scripps Howard Foundation, who through their support made possible the Cronkite School’s newest program — the national Howard Center for Investigative Journalism.

Earlier in the day, Holt discussed his unconventional career path with more than 300 Cronkite students who filled the school’s First Amendment Forum, taking time to answer questions from students who are close to entering the field. During the hourlong discussion, led by Cronkite student Jennifer Alvarez, Holt addressed the complexities of the current and evolving media landscape, lauded the demand for the profession and offered advice to future journalists.

“The stories of the day are naturally divisive,” Holt said. “We have to give people perspective on why stuff matters. We have to go in eyes wide open, recognizing that a lot of audiences right now will hear what they want to hear and will gravitate sometimes to places that will confirm their world view.”

He urged students to bring compassion to their work, saying it is a critical element of journalism that is often overlooked.

“We are journalists, but we are also people,” Holt said. “It’s not an editorial position to feel sad about someone’s loss. That’s a human reaction. It’s OK to inject some of that into a story. These are human stories first and news stories second.”

Holt has anchored the flagship NBC broadcast since 2015, following eight years as anchor of the newscast’s weekend edition and 12 years as co-anchor of “Weekend TODAY.” He also leads NBC’s special reports, major breaking news and primetime political coverage and has served as principal anchor of “Dateline NBC” since 2011.

His work has been recognized with multiple Emmy Awards, a Robert F. Kennedy Journalism Award and the Fred Friendly First Amendment Award. In 2016, he was named Journalist of the Year by the National Association of Black Journalists.

Holt has covered more than a dozen natural disasters, including the aftermath of Hurricane Katrina, and has covered every Olympics on the ground since the 2002 Winter Olympics.

Cronkite Dean Christopher Callahan called Holt “an inspiration to our students, and to all of us.”

“I want to simply say how excited all of us at the Cronkite School are to have Lester Holt here with us today to celebrate his great career and the journalistic values and principles he represents,” Callahan said, adding, “Those Cronkite values and principles are also on display every day at our school, through the extraordinary students who will be the next generation of great journalists in the tradition of Holt and Cronkite.”

Holt during his remarks recalled watching as a child as Cronkite anchored the big stories from the funeral of President John F. Kennedy to Vietnam, from race riots to “the incredible journey we know as Apollo 11.”

Holt told the story of when he was a young radio reporter years later and he “couldn’t wipe the smile off his face” that day in 1980 during a visit to CBS network headquarters in New York. He came face to face with Walter Cronkite as he walked out of the studio and shook his hand.

“At that moment I found Mr. Cronkite as more than a figure to admire, but rather someone whose career and approach to news I someday hoped to follow,” Holt said. “And you know the rest of this story. That kid today anchors a national evening news program of his own, and now stands before you honored with an award named for Walter Cronkite.”

These are different times than when Walter Cronkite delivered the news, and there will never be anyone quite like him, Holt added.

“But his authenticity, his attention to detail, calm demeanor — and this is really important — his respect for the viewer are values and skills that all of us in front of the camera should aspire,” he said. “And as Walter himself would likely conclude, ‘That’s the way it is.’”