'Once Upon a November': Footprints of Alexander Dodge

When “Anastasia” rolls into town to light up the ASU Gammage stage later this fall, it will be a homecoming of sorts. The acclaimed set designer for the Broadway production, Alexander Dodge, spent his formative years here. While growing up on the Taliesin West grounds and romping around ASU Gammage and the campus’s birthday-cake-like music building, Dodge's own designing brain was incubating...

'Once Upon a November': Footprints of Alexander Dodge

Dodge, who spent formative years in Arizona, returns as set designer for 'Anastasia' at ASU Gammage

When “Anastasia” rolls into town to light up the ASU Gammage stage later this fall, it will be a homecoming of sorts. The acclaimed set designer for the Broadway production, Alexander Dodge, spent his formative years here. While growing up on the Taliesin West grounds and romping around ASU Gammage and the campus’s birthday-cake-like music building, Dodge's own designing brain was incubating.

"My father was working with Frank Lloyd Wright, so I spent time growing up both at the Gammage and the music school’s building sites," Dodge said of his 10 Arizona years. "It was a crazy and magical time. We used the interns’ abandoned shelters [at Taliesen West, where Dodge's father is still working] as our play forts." 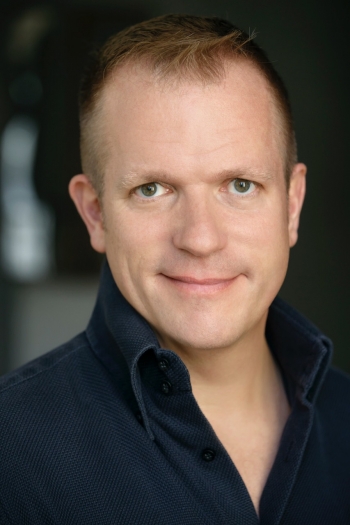 As a teenager, Dodge performed in Tempe piano competitions that were located at the new music building on campus. He recalls that the competitions were nerve-wracking, but the breathtaking scene could calm his jitters.

"It was the enchanting view. The competitions were held on the rooftop terrace," he said of the serene setting.

Thinking about what kind of impact his early experiences in the Valley may have had on his career, Dodge said, "I guess I learned how to see, how to look at things. I developed my own philosophy of designing from the inside out.  For a set designer, that means I think a lot about things like, ‘What are the characters who occupy this space thinking? Feeling? Doing?'"

He asked those kinds of questions when he designed his Tony-nominated “A Gentleman’s Guide to Love and Murder" set, a show audiences at ASU Gammage laughed through a few seasons back. He also used that mindset as he tinkered with how to depict “Anastasia’s” story. It's a tale that traverses different countries, but also bridges huge social gaps, too, as its lush story chugs along.

"We needed a world that unified Russia and France, a world in an envelope. It needed to become its own breathing, living machine," Dodge explained. "LED screens and other media, technology that wasn’t feasible even a few years ago — say, when we designed 'Gentleman’s Guide' — helped create new effects."

Dodge noted that the train car scene, when Anastasia, Dimitry and Vlad are traveling from Russia to France — during a song called "Learn to Do It" — was his biggest challenge. The scene developed into a visually stunning presentation of silhouettes, steam and juxtapositions.

"I took that challenge on headfirst. It was one of my ways in [to the approach he developed for the whole show]," Dodge said. "The number is a trio that jumps from person to person. It’s cinematic, like we’re in a movie peeking into different windows. The train car starts to spin on stage while projections of a train are coming straight at you. Next, you're seeing through the side of the car. Once we solved the train car, the rest was more standard."

Part of Dodge's inspiration came from firsthand observation. He soaked in classical architecture at its source.

“Oddly enough, I was on location in France. It was sort of a three-birds-with-one-stone experience,” Dodge said.

The France trip allowed him to research and work on not just “Anastasia” He was also designing the opera “Ghost of Versailles” and Disney’s stage musical “The Hunchback of Notre Dame.” Though Russia was not on his travel itinerary, Dodge was able to make the onstage country-hopping flow seamlessly.

“There are so many similarities and elements that are the same ... maybe because the Russians took their ideas from France,” Dodge said.

He described the show's palette as "nuanced and subtle," though he's also attracted to the power of saturating the stage in opulent reds at one point when the scene smoothly transforms into a Paris nightclub.

The central feel, however, he described by saying, "There’s a metaphysical element in the naturalistic pale blue of Monet. It calls up a dream palace or the cloud of a fairytale."

When Dodge thinks of “Anastasia” playing at ASU Gammage, he appreciates that the necessary changes for the tour are aimed at getting intimacy and immediacy into bigger houses. It has become a "taller, grander" show than New York's smaller Broadhurst Theatre would allow.

"Definitely the essence and the feel of the Broadway show is present," Dodge said about the majestic settings that include a Russian palace. "Because the houses on tour are bigger, we were able to add an extra three feet to the towering arches, making it even more palatial.”