Other Arizona companies to receive the distinction during Arizona Biosciences Week this year were Biosensing Instrument in Tempe and Gt Medical Technologies in Mesa. 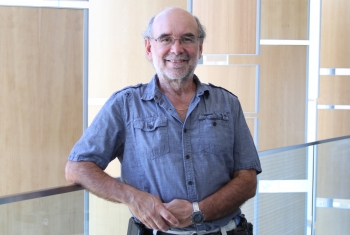 Grant McFadden, director of the Biodesign Center for Immunotherapy, Vaccines and Virotherapy, is the co-founder of OncoMyx. Download Full Image

The annual award recognizes Arizona bioscience companies that have arrived at significant milestones during the past 18 months. Impact is measured by such factors as clinical results, regulatory approvals, certifications, collaborations, funding awards, product launches, job growth or product sales milestones.

OncoMyx was incorporated in 2018 by founders Grant McFadden, director of the Biodesign Center for Immunotherapy, Vaccines and Virotherapy, company CEO Steve Potts and COO Michael Wood. The company aims “to develop oncolytic immunotherapies with an unambiguous, promotable advantage that eradicate hard-to-cure cancers.”

The company is creating tumor-destroying immunotherapies based on the myxoma virus (MYXV), a poxvirus that causes localized skin infections in rabbits, but is safe in humans and any organism outside of rabbits. The virus has a unique ability to be carried systemically by human leukocytes where it can then infect tumor cells. McFadden has pioneered the MYXV field and is widely regarded as a top oncolytic virus (OV) expert.

McFadden and his collaborators have spent the past two decades evaluating MYXV in a wide variety of tumor models. The natural target of the virus is the European rabbit, in which it causes a lethal disease. Because it only grows in rabbit cells or cancer cells, it does not infect healthy human tissue. In humans, the virus is harmless, except when it encounters a cancer cell. McFadden’s research team has successfully targeted various types of cancers.

According to McFadden, “OVs are emerging as a new pillar of cancer care to complement the effectiveness of immunotherapies such as immune checkpoint blockade. The best-in-class MYXV platform is the only OV in development that is collectively a nonhuman pathogen, inherently immuno-stimulatory, easily multi-armed, and systemically delivered.”

In June 2019, OncoMyx announced the completion of a $25 million series A financing led by Boehringer Ingelheim Venture Fund (BIVF), Delos Capital and Xeraya Capital with participation from Korea Investment Partners (KIP), City Hill Ventures and Madison Partners. OncoMyx is using the proceeds to advance development of its lead oncolytic virus therapeutic program for the treatment of various cancers.

OncoMyx is currently being launched in Phoenix to test next-generation viruses in human clinical trials against a variety of human cancers.

OncoMyx will spearhead the next-stage development plans of oncolytic myxoma virus to seek FDA approval and conduct the first human clinical trials, using their patented systemic delivery approach. The company will capitalize on McFadden’s two decades of research into the potential of oncolytic viruses. McFadden sequenced the myxoma virus genome in 1999, and since then has produced dozens of genetically engineered constructs, demonstrating its ability as an oncolytic agent across many tumors in preclinical cell and animal models.

Preclinical studies in mice and testing on cancer patient samples from Mayo Clinic in Scottsdale have demonstrated encouraging immune responses against tumors. These data points build upon the continued clinical validation of OncoMyx’s platform to expand the boundaries of cancer treatment and potentially benefit a large group of patients.

Kanad Das, executive director of Boehringer Ingelheim Venture Fund said, “We look forward to working with the team to develop drugs that help improve patients’ lives across a range of malignancies.”

For more information about Grant McFadden and his work with the rabbit virus, visit “Treating cancer with a rabbit trick" at Ask a Biologist.

“An honor and a dream come true.” That’s how Associate Professor YoungJu Shin of the Hugh Downs School of Human Communication described her experience in a yearlong scholars program that provided her the opportunity to discuss effective communication with U.S. and Korean diplomats, policymakers and journalists.Shin, a health and intercultural communication scholar, was one of 11 people sele...

“An honor and a dream come true.”

That’s how Associate Professor YoungJu Shin of the Hugh Downs School of Human Communication described her experience in a yearlong scholars program that provided her the opportunity to discuss effective communication with U.S. and Korean diplomats, policymakers and journalists. 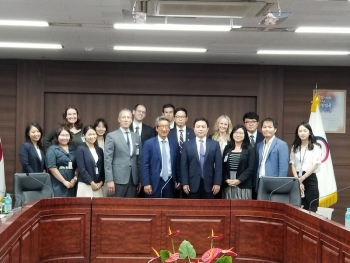 Shin, a health and intercultural communication scholar, was one of 11 people selected in a national competition to the U.S.-Korea NextGen Scholars Program. The program's goal is to mentor the next generation of Korea specialists in the United States who will make long-term contributions to the U.S.-Korea relationship.

“As the only communication scholar in the program and one of a few Korean citizens, I feel I was able to provide unique insight on how various media outlets report news about U.S.-Korea relations,” Shin said. “Message framing is the result of different agendas and perspectives, and I was able to compare and contrast stories put forth by the media.”

The scholars program is an initiative by the Center for Strategic and International Studies Korea Chair and the University of Southern California’s Korean Studies Institute.

Shin, second from left, with the scholars, met with U.S. Ambassador Harry Harris in the U.S. Embassy in Seoul.

Over the past year, Shin traveled to Los Angeles, Washington, D.C. and Seoul to interact with such dignitaries as South Korean Ambassador Cho Yoon-je and U.S. Ambassador Harry Harris.

She was also a guest panelist at Seoul National University and spoke about narratives focusing on South Korean and other Asian women who were forced to serve as “comfort women” (Japanese military sex slaves) during World War II.

“It’s heartbreaking to hear about this topic,” Shin said. “However, through recent documentaries and films, these individuals have told their stories to allow a wider audience to know about their horrifying and unforgettable experience. They claimed they are the living evidence of the Japanese military's unethical practice toward human rights.”

“Participating in this program was such a meaningful experience for me,” Shin said. “This will have a profound impact on my research and teaching. I hope to continue to engage and investigate civil dialogues on issues pertaining to narratives and storytelling in both the U.S. and South Korea.”