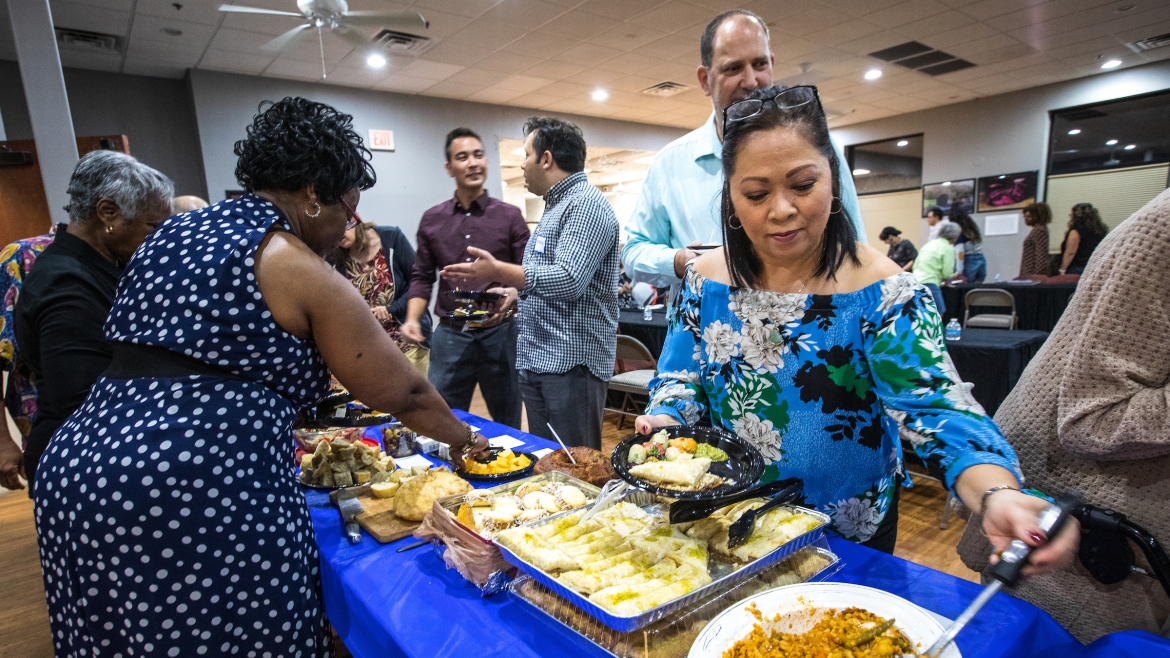 ASU initiative encourages participants to ‘dish’ with each other

Project Humanities cooks up forum on how food, identity and politics relate

In the South, they like things fried and usually soaked in gravy.

Food is not only a staple of life, but a staple of one’s own identity; that’s the idea behind an Arizona State University engagement program designed to examine and discuss how foods define us.

“Everyone on the planet has some sort of relationship with food. Humans' relations with food are complex and often complicated by time, place, circumstance and space,” said Neal Lester, professor of English and director of ASU's Project Humanities. “This program looks not only at how, when and why food — and food preparation even — brings individuals and communities together but also how food, food behaviors and values associated with and ascribed to food separate us.”

Project Humanities, an award-winning initiative, hosted “Vital Voices: Food, Identity and Politics” last week in Chandler to highlight how food brings people together, how it creates gaps within society and what distinguishes “good food” from “bad food.”

The program was the brainchild of Jocelyn Booker-Ohl, a coordinator with Project Humanities.

“Food in America takes on many different meanings and weaves itself into health, nutrition, relationships, economics, cultural appropriation, sustainability, waste and humanity,” Booker-Ohl said. “Culturally, we need to talk about food and the way we approach it.” 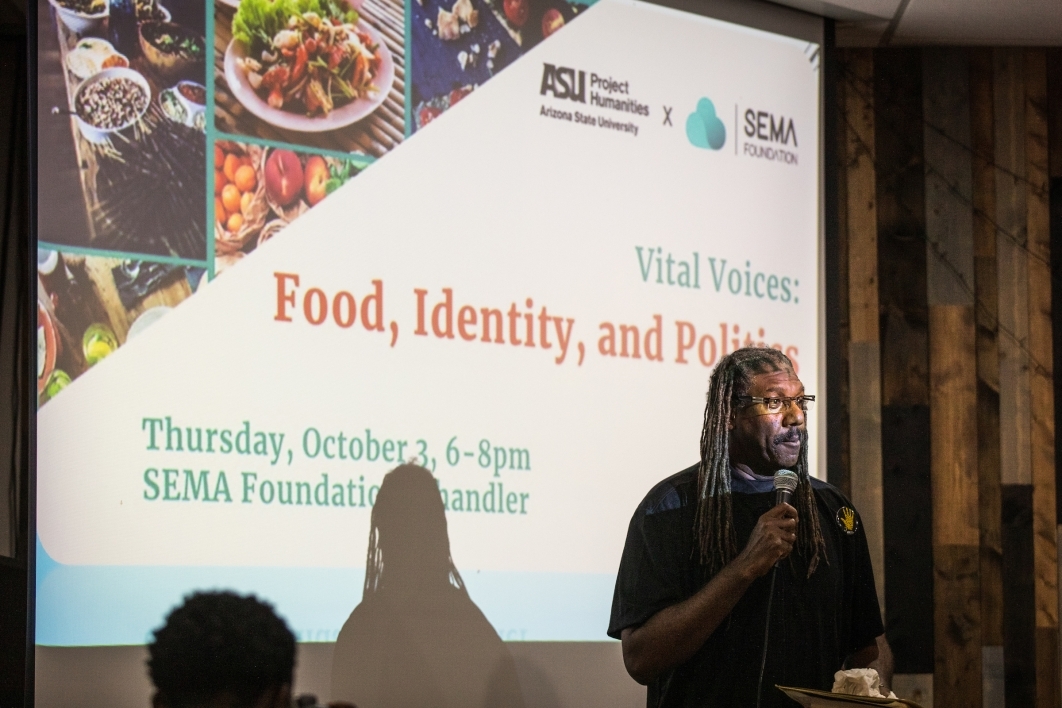 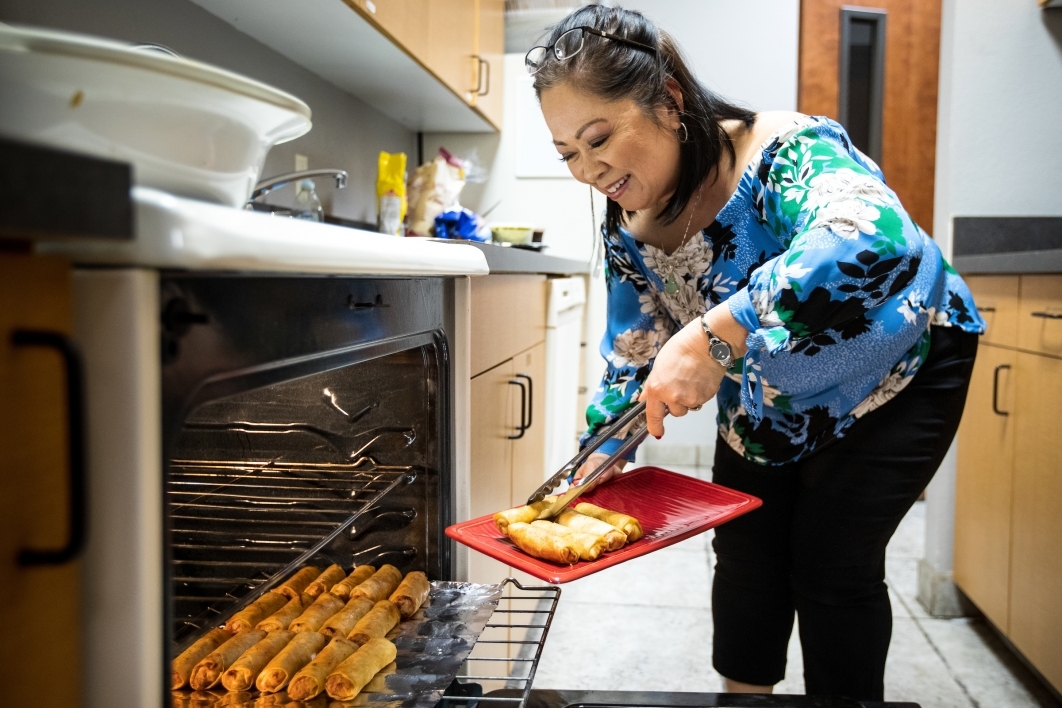 Chantal Van Klompenberg removes her Vietnamese spring rolls from the oven before the "Vital Voices" event. 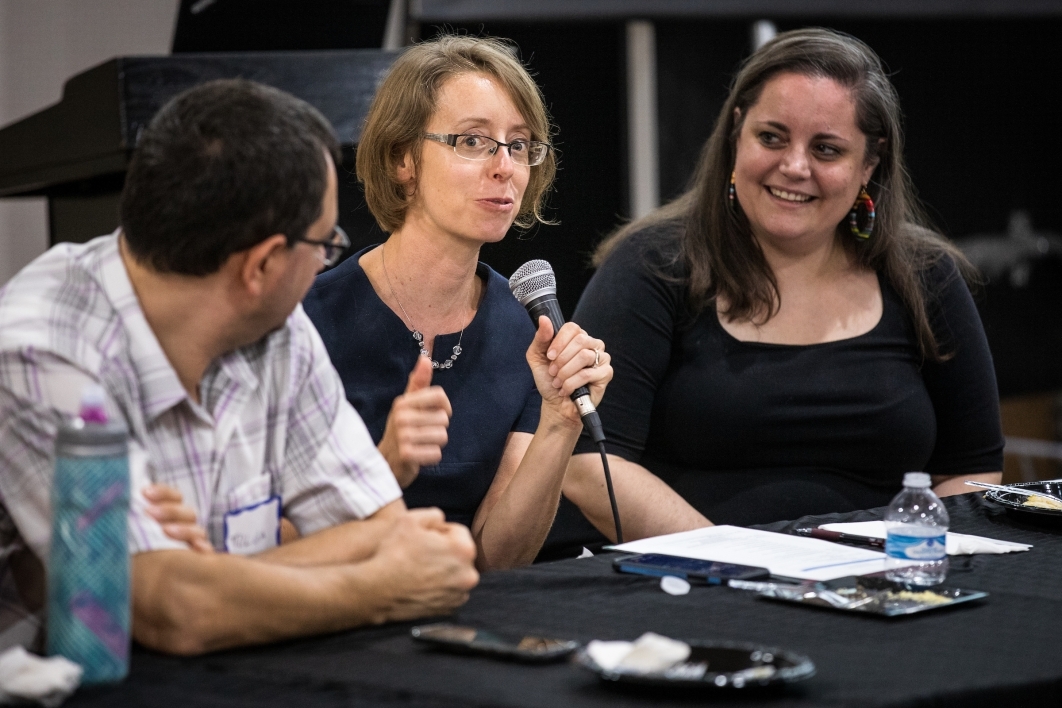 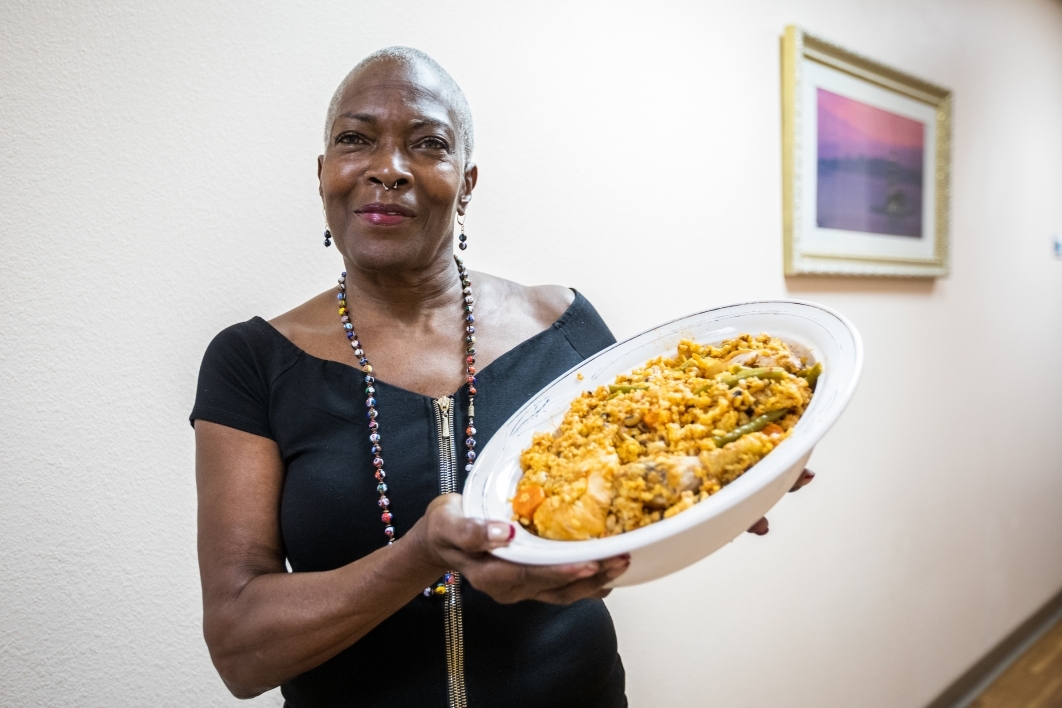 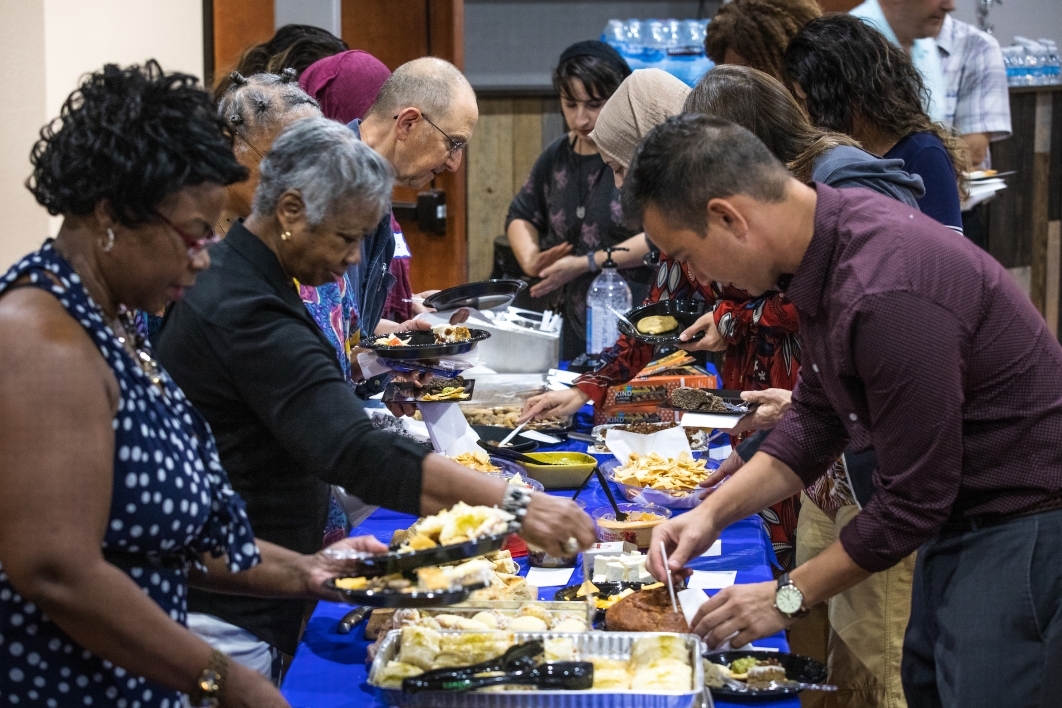 Attendees enjoyed a sumptuous banquet of dishes at "Vital Voices," which taught that food is not only a staple of life, but a staple of one's own identity.

The dialogue turned out to be as spicy as some of the dishes, which represented India, Argentina, Vietnam, Africa, the Middle East and various regions of the United States.

“In our culture, food brings family together,” said Chantal Van Klompenberg, who after raising her children returned to ASU to obtain her degree from the Hugh Downs School of Human Communication. She prepared Vietnamese spring rolls for the crowd of approximately 50 people, including her 31-year-old son. “It was our down time together. Our catch up time. We made them for special occasions. Some of the best memories my children have growing up is preparing spring rolls.”

For ASU alum Adebiyi Banjoko, one of five expert panelists invited to the program, food is a good way to explore another person's culture.

“I was born in Chicago but became interested in African traditions when Dr. Maulana Ndabezitha Karenga created Kwanzaa in 1966,” said Banjoko, who brought jollof rice, a West African dish, to the event. “So this is no longer about my celebrating my culture but sharing it with other people.”

Scottsdale resident Ramona Ferrara brought carrot cake prepared by her brother. She said it was an original recipe from her mother and a way for them to preserve her memory and recall the past.

“When I was growing up, we had this old-fashioned metal grinder, and we’d stick the carrots in and they’d come out all slivered and it was pretty cool,” said Ferrara, who is originally from Massachusetts. “This was the basis for her carrot cake. Mom was a dessert person and made them for big meals.”

But not everyone was so sentimental about food.

Ahmad Daniels, a transformational facilitator, life coach and founder of Tempe-based Creative Interchange, said food should be viewed as a “mind, body and spirit connection.”

“We eat food for three main reasons: growth, maintenance and repair,” said Daniels. “There’s a common denominator between what we eat and how we think … when your body is in touch with itself, it will let you know what it needs.”

Joan McGregor, a professor with the School of Historical, Philosophical, and Religious Studies, researches food, food justice and food sustainability. She said addictive ingredients found in food are often created by the food industry and subsidized by the government.

“The food industry spends a lot of money on neuroscientists to look at the bliss point with salt, fat and sugar and how your brain lights up like it’s on heroin,” McGregor said. “Children are being diagnosed with diabetes now, whereas 30 years ago that was not the case. I feel like food is killing us. Let’s expose these types of injustices and let’s expose our government and corporations.”

Roseanne Schuster, a nutritionist with ASU’s School of Human Evolution and Social Change, said parents and caregivers are highly motivated to feed their kids nutritious meals and want them to have a healthy relationship with food. However, that’s not always a straightforward path to navigate.

“It often feels like food is under attack with the rise of various health crises,” said Schuster. “Many times food companies try and trick us into foods we think are nutritious but masquerade as something else. So education is important.”

A PhD student at Arizona State University who is finding a way to clean water with light will get the chance to present her research on a global stage after she won the Falling Walls Lab event on Friday at the Downtown Phoenix campus. Mariana Lanzarini-Lopes (pictured above), who is working on her PhD in environmental engineering, was one of 12 research competitors at the pitch event and won a tr... 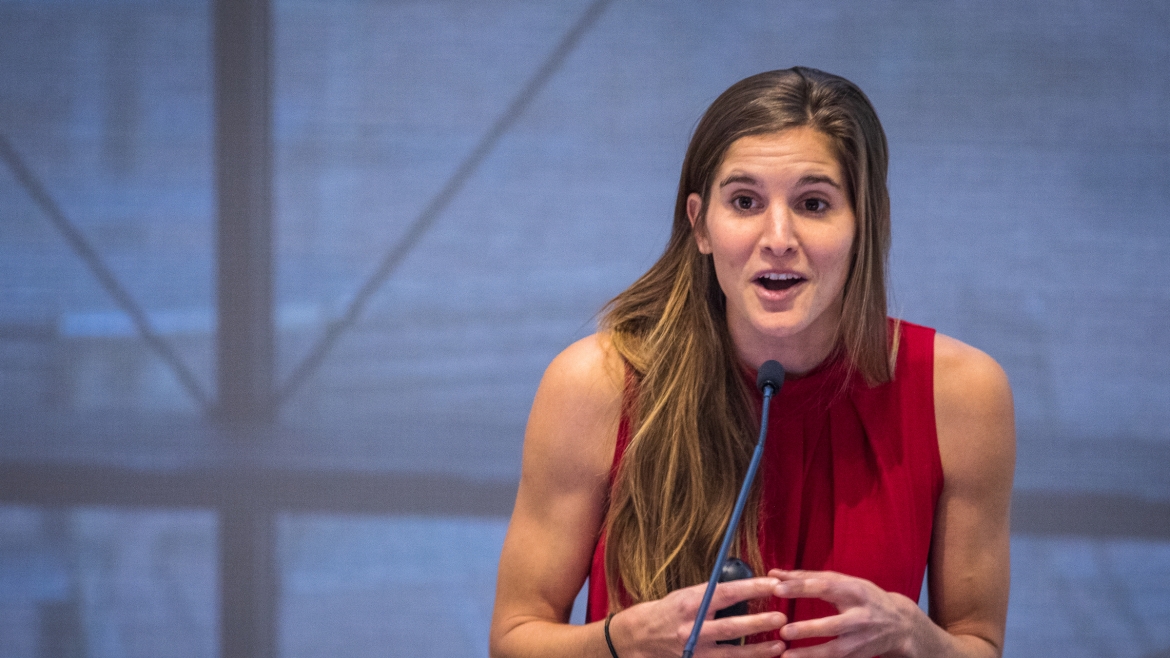 Students present ideas for solutions in tech, education and the arts at Falling Walls Lab; winner heads to Berlin finale next month

A PhD student at Arizona State University who is finding a way to clean water with light will get the chance to present her research on a global stage after she won the Falling Walls Lab event on Friday at the Downtown Phoenix campus.

Mariana Lanzarini-Lopes (pictured above), who is working on her PhD in environmental engineering, was one of 12 research competitors at the pitch event and won a trip to Berlin for the Falling Walls Lab finale next month.

The competition, sponsored by the Global Futures Laboratory at ASU, showcased research in technology, education and the arts. Falling Walls Labs have been held around the world every year since 2011, and this was the first one in Arizona, with jurors from all three public universities and Maricopa Community Colleges. The research showcases are part of the Falling Walls Foundation, an international platform for science, business, politics, the arts and society that was created in 2009 to mark the 20th anniversary of the fall of the Berlin Wall. This year’s lab finale will be held Nov. 9, the 30th anniversary.

In her pitch, Lanzarini-Lopes told the judges that 2 billion people around the world drink contaminated water and 500,000 people die from it every year. LED light has been known to be a disinfectant, but the problem has been deploying it efficiently, because the lights must be close to the microbes to kill them.

“If you look at current water treatment systems, they use bulky lamps that are not energy-efficient and contain mercury and are not available in developing countries,” she said.

She’s working on a way to use flexible optical fibers woven into a fabric to disinfect water at treatment plants and in pipes.

Lanzarini-Lopes works in the NEWT lab, the Nanosystems Engineering Research Center for Nanotechnology-Enabled Water Treatment, run by Paul Westerhoff, and has received funding from NASA to investigate how the system could work in space.

“We really brainstormed and figured out that we knew a way to go forward, even though there were a lot of technological challenges,” said Lanzarini-Lopes, who previously did research at the Lawrence Livermore National Laboratory in California.

She said she’s excited to be one of about 100 presenters from around the world at the finale event in Berlin next month. After defending her dissertation early next year, she’s considering whether to spend time in the business world in order to spin off her work into a company. But her heart is in academia.

“I love teaching. I taught an intro to engineering class at ASU, and now I teach an intro to biology class at the prison in Florence and I love that,” she said. “I’m mentoring a lot of students in the lab, which I really enjoy. I’d love to have to my own lab and take my research in the direction I want to go.” Pablo Coll won second place at the Falling Walls Lab for his presentation about breaking the wall of the silicon empire by producing a wafer with sound waves. Photo by Charlie Leight/ASU Now

The second-place winner in the competition was Pablo Coll, a PhD student in materials science and engineering. He described his work on “sonic wafering,” a method using sound waves to more precisely cut silicon wafers for the technology industry. Coll, co-founder of the company Crystal Sonic, told the judges that traditional laser cutting of wafers produces a lot of waste and that his method is faster and more accurate. Crystal Sonic has already received thousands of dollars in funding from the Department of Energy and the National Science Foundation, as well as the Edson Student Entrepreneur Initiative at ASU.

The third-place winner was Andrew Bernier, a teacher and postdoctoral research fellow in the Rob and Melani Walton Sustainability Solutions Service at ASU, who invented a platform for teachers to evaluate students. Instead of assigning one grade per assignment, the new kind of digital gradebook would allow teachers to see how students are making connections between key concepts, and where they need more support. This could lead to deeper, project-based teaching.

Eleven of the competitors were from ASU and one, Michael Larson, was from the University of Arizona. Larson is creating a new kind of biopsy needle that can harvest a larger amount of tumor tissue than conventional needles, potentially reducing the need for repeat biopsies. A greater sample of tumor tissue also allows for more personalized cancer therapies.

Before the researchers presented their work, Volker Benkert, an assistant professor of history at ASU, described the extraordinary events that led up to the fall of the Berlin Wall and the reunification of Germany.

“Thousands of people had gathered at the wall and the border guards have to make a choice. They have standing orders to fire at people who approach the wall. Will they shoot?” he said. “In the end, they decided, ‘OK, we’ll open the border.’

“These were ordinary people who stepped courageously out of their homes into the street, where they were vulnerable to arrest.”

Yet many obstacles to freedom remain, he said.

“There are thousands of walls to be torn down. This is a project for many generations.” 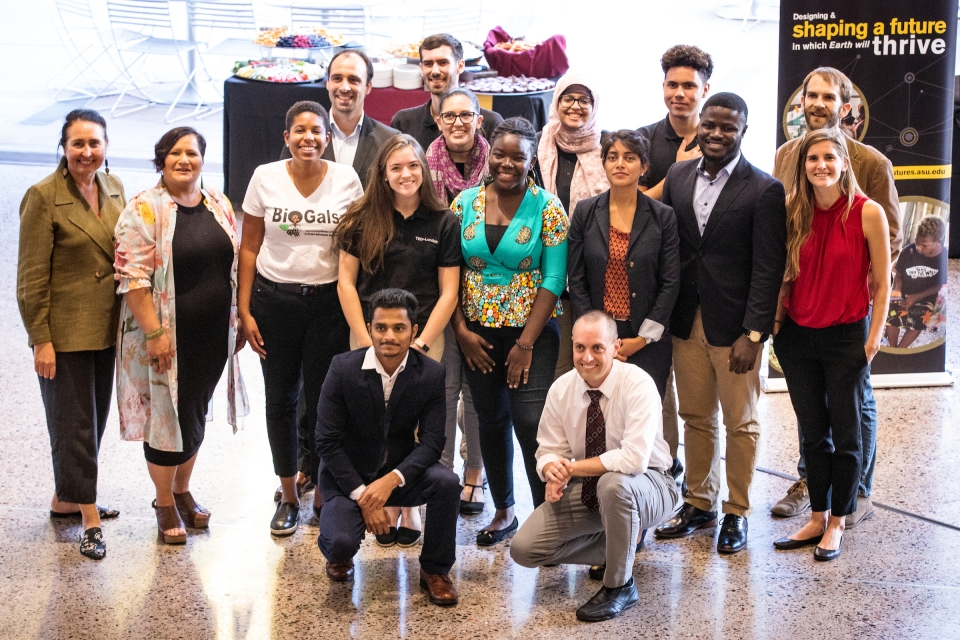