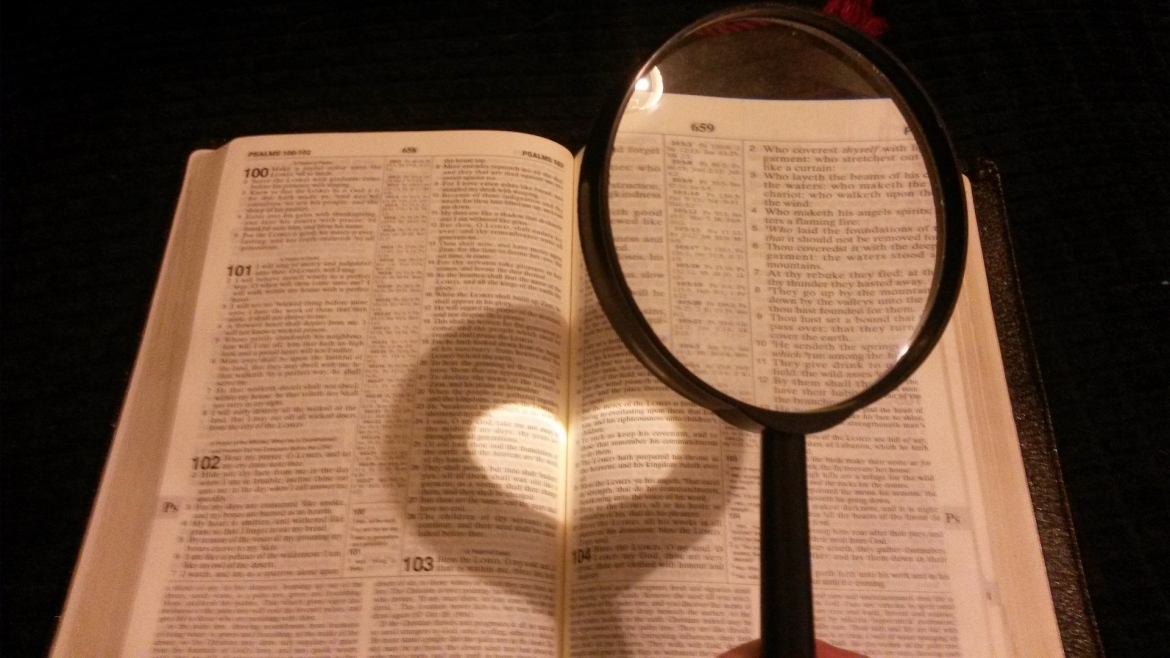 True crime shows are beloved by many for their comprehensive (if not entirely accurate) portrayal of forensics investigations. But amid all the DNA testing and black light wielding, some of the field’s more subtle methods of identification can get overlooked.

Last year, forensic linguists made headlines when they were called upon to determine who wrote the anonymous New York Times op-ed about President Donald Trump.

Briefly speaking, forensic linguistics is a branch of applied linguistics that examines vocal and written evidence for legal purposes.

“At its heart, it's about determining authorship,” said Elizabeth Martinez, a linguistics doctoral student at The College of Liberal Arts and Sciences at Arizona State University. “But it can generally be described as a broad field in which language meets the law.”

Martinez hopes students and faculty alike will get an idea of just how broad at ASU’s first-ever Forensic Linguistics Conference, taking place Friday, Oct. 4, through Saturday, Oct. 5, at Ross-Blakley Hall on the Tempe campus. 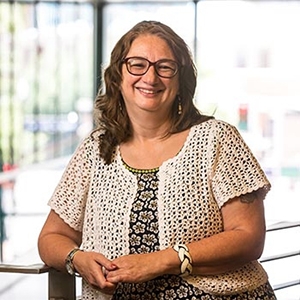 It is free and open to the public, and students and professionals interested in everything from legal language to author/speaker identification to trademark issues are encouraged to attend.

“There aren’t many other conferences like this in the world,” said van Gelderen. “So it’s exciting to bring these experts to ASU to learn from each other and teach students about the field. Students find it really interesting because it’s a way of applying linguistics in the real world.”

Her main area of interest is police interrogations, or interviews, depending on which side of the pond you’re on. The British system, Martinez explained, more often employs a questioning technique that involves establishing rapport, listening to a suspect’s story and looking for inconsistencies. Whereas in America, she said, some police have been known to tell a suspect that they’re already certain they committed the crime, using intimidation to incite a confession.

“They don't call them ‘interrogations’ in Britain; everything's an ‘interview,’ even with suspects,” Martinez said. “America is moving in that direction, but it's turning a big ship around, and it’s going to take some time. The way it’s done now can result in false confessions and wrongful convictions, and it's very hard to walk that back.”

One example is the the now infamous 1989 Central Park Five case, in which five teenagers were wrongfully convicted of rape and spent anywhere from six to 13 years in prison before a serial rapist owned up to the crime.

Another high-profile illustration of forensic linguistics at work is the Abscam sting operation of the early 1980s that led to the convictions of seven members of the U.S. Congress for corruption, including Sen. Harrison A. Williams. A large contributor to Williams’ conviction was his misidentification on a taped recording of a conversation that led his colleagues to believe he was the individual on the tape who had referenced willful wrongdoing, when in fact it was someone else.

The field can be useful in sussing out plagiarism (“Anyone who's ever taught freshman composition is probably a pretty good forensic linguist,” Martinez said), as well as trademark infringement claims. Martinez has seen the latter on display when a tailoring company found itself at the wrong end of a lawsuit for claiming their suits were “bespoke.” What it came down to was the definition of the word, and whether the fact that parts of their suits were prefabricated meant they couldn’t actually refer to them as custom made.

“So critical discourse is a big part of (forensic linguistics), too,” she said. “It's like, somebody says something, but what did they mean? There have been a few instances with legal interpretations lately where justices will actually go back and look at dictionaries that were contemporaneous to the time that the law was written to see what the meaning of a certain word was at that time.”

And because meanings of words can change over time, investigators have to be careful to take that into consideration when evaluating suspect descriptions in police reports that were written many years ago, as was the case with a report Martinez dealt with that described the suspects as “youths,” a term that today has connotations of delinquency but at the time would have been analogous to the term “minor” as it is used today, to simply relay a suspect’s relative age.

But forensic linguistics is about so much more than busting criminals, Martinez says, and that’s reflected in the variety of topics that will be presented on at the conference. They include privacy policy language in the personal data economy (ie; how well people understand the language used in documents they sign for bankruptcy proceedings and obtaining financing from lenders) and proper protocol for assigning interpreters to immigrants in court hearings so that nothing is lost in translation.

Martinez says when it comes down to it, language and how we use and interpret it is all about who has the power in society. She cited a recent study of court reporters in Philadelphia, a city with a sizable African American population, that found a large amount of the time, court reporters did not understand black speakers, which resulted in an incorrect transcription that could negatively affect the outcome of their case.

“When you can't understand what someone is saying and that becomes the permanent record of what happened, that's a big problem,” she said.

Yet Martinez is optimistic that spreading awareness of the forensic linguistics field can help to ensure more just legal proceedings, and she hopes the upcoming conference will serve to buoy that endeavor.

“It's just a small community of experts right now, but I think that more attorneys would utilize the field if they knew about it,” she said.

Associate Professor Matthew Prior agrees with Martinez, so much so that he encouraged her to begin organizing the conference.

Prior served as chair of the Interdisciplinary Committee of Linguistics at ASU, which earlier this year hosted its first guest speaker, Edward Finegan, an emeritus professor of linguistics and law at the University of Southern California’s Gould School of Law. Finegan’s research has revealed how some judges have decided cases by cherrypicking certain word meanings over others that suit their purpose. He led a workshop on Forensic Linguistics 101, covering the nuts and bolts of the field. It was one of the committee’s best-attended events.

“Forensic linguistics is probably one of the most overlooked areas where linguistics meets real life in such a visible and impactful manner,” Prior said. “It really gets into issues of power and control and the meaning of language, as well as social justice. It’s one of the most exciting spaces where language in the real world is front and center, so I’m very impressed that (Elizabeth) saw this as important and put this conference together.”

Celebrating strong pathways to college during National GEAR UP Week

Celebrating strong pathways to college during National GEAR UP Week 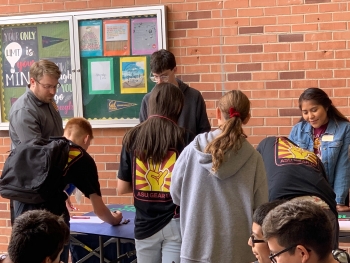 Students, educators and parents at a GEAR UP Week 2019 event at Kino Junior High in Mesa. Download Full Image

The week’s celebrations incorporated evidence-based activities that improve student success. Arizona students wrote letters to their future selves giving advice, an activity that has been shown through research to improve young people’s confidence and motivation.

Some of the advice Kino Junior High students gave to their future selves:

GEAR UP programming starts in seventh grade and goes through students’ first year of postsecondary education. GEAR UP senior coordinator Ricardo Villa-Sanchez, who worked with the program as a tutor at Sullivan Elementary School when he was a student at ASU and also worked at Carl Hayden High School, says that the impact on students lasts beyond the official programming.

“My favorite part of GEAR UP has been the bond formed between staff and students. These relationships turn into meaningful and long-lasting mentorship. I still actively work with a handful of graduated GEAR UP students from my tenure as an academic tutor,” Villa-Sanchez said.

He and senior coordinator Jasmine Dean lead Arizona's programs by supervising tutors and mentors and working with administration and staff on programming, events and services. Though he earned his degree in psychology, Villa-Sanchez said that his first experience in GEAR UP pushed him in the direction of education.

“The time spent with students is still the most enjoyable part of my job and always serves to reinvigorate my drive for doing the job that we do,” Villa-Sanchez said. “Programs like GEAR UP will often serve as a long-lasting, impactful experience that helps to drive future opportunities.”

ASU earned a $1 million U.S. Department of Education State and Partnership GEAR UP award to provide seven years of funding for the program. Districts participating in the GEAR UP grant include Tempe Elementary, Tempe Union, Mesa Public Schools, Pendergast Elementary, Tolleson Elementary, Tolleson Union, Glendale Elementary, Washington Elementary and Glendale Union. Community partners include the Be A Leader Foundation, APS, Glendale Community College, the Arizona College Access Network, MidFirst Bank, Mesa Counts on College, Tempe College Connect and many others who are committed to improving postsecondary outcomes for Arizona students and families. Many of these partners are also part of the Achieve60AZ goal that by 2030 60% of Arizona adults will hold a postsecondary credential or degree.

Sylvia Symonds, ASU associate vice president of outreach for ASU’s Educational Outreach and Student Services, said that ASU is proud to celebrate the impact of GEAR UP with the national community.

“This is a program that is transforming the lives of more than 1,000 families in Arizona every year by providing family engagement and rigorous coursework that opens up the college-going pathway for students. GEAR UP students, educators and partners should be proud this week and every week about making higher education possible and more accessible for more Arizonans,” Symonds said.

Sharon Smith, dean of students at ASU’s Downtown Phoenix campus, said that GEAR UP is a program that has a real and sustained impact on students’ lives and Arizona’s goals for higher education.

“The GEAR UP program provides rigorous academic, personal development and career preparation tools for students to access higher education, receive professional development and gain mentorship and friendships that have a lasting impact on students’ lives,” she said.