The Arizona State soccer team will continue their four-game home stand with an afternoon meeting against Utah Friday at Sun Devil Soccer Stadium.

Americans today are being assailed by the rise of “fake news” and a growing combativeness around democratic principles, including freedom of the press and religion, that have long been considered settled. From basic facts to fundamental democratic values, a lot seems up for grabs.To understand and challenge these trends, faculty affiliated with Arizona State University’s Center for the Study...

Americans today are being assailed by the rise of “fake news” and a growing combativeness around democratic principles, including freedom of the press and religion, that have long been considered settled. From basic facts to fundamental democratic values, a lot seems up for grabs.

To understand and challenge these trends, faculty affiliated with Arizona State University’s Center for the Study of Religion and Conflict have received two grants for projects that will put ASU at the forefront of new conversations about truth in the public sphere — how we know it, recognize it and identify it. 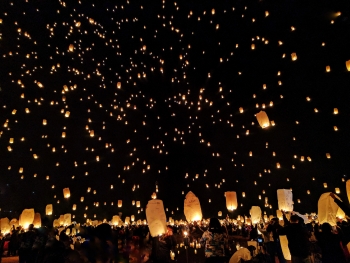 A $750,000 grant from the Henry Luce Foundation’s Theology Program will fund a project on “Recovering Truth: Religion, Journalism and Democracy in a Post-Truth Era.” Through this project, faculty will examine how different religious, philosophical and political traditions can help citizens appreciate and restore different conceptions of truth that are vital to public life.

“Recovering Truth,” will create new platforms for thinking and communicating about truth. Faculty and graduate students will work together with journalists and theologians to consider how theology — the study of ideas about God — might be reintroduced into public conversation as a way to search for truth. The study of theology, largely relegated to seminaries, has the potential to offer resources for thinking deeply, analyzing critically and reflecting ethically.

Through this project, faculty hope to increase understanding of the relationship between religion and democracy. It will create a network of scholars and journalists who will explain how religious studies and theology offer methods and resources for seeking truth. This group will dedicate much of its focus to communicating complex ideas to the public through magazine articles, short videos, podcasts and other media.

“Recovering Truth,” will be led by John Carlson, interim director of the Center for the Study of Religion and Conflict, and Tracy Fessenden, the Steve and Margaret Forster Professor of Religious Studies and director of strategic initiatives for the center. Joining Carlson and Fessenden are co-principal investigators Kristin Gilger, associate dean of the Walter Cronkite School of Journalism and Mass Communication, Gaymon Bennett of the School of Historical, Philosphical and Religious Studies, and award-winning journalist and Assistant Research Professor Anand Gopal.

“Both scholars and journalists share a common mission to pursue the truth, but they also have been singled out for criticism,” said Carlson. “Scholars are often portrayed as ivory tower elites, while journalists have been labeled 'the enemy of the people' by the president of the United States. This project will enable these two professions to collaborate more productively and enrich their work in the service of recovering the importance of truth and repairing the fabric of democratic life.”

In addition to "Recovering Truth," the Templeton Religion Trust has awarded the center $1.7 million in funding for a project titled “Beyond Secularization: A New Approach to the Study of Religion, Science and Technology.” A central concern of the project is how science and technology came to be understood as intrinsically secular and thus privileged in arbitrating what was true and meaningful for public life, including the limits of that approach.

Learn more about the 'Beyond Secularization' project

“These two humanities-based initiatives, with their focus on religion, technology, science and journalism will help foster a more-informed citizenry and a more democratic and humane nation,” said Jeffrey Cohen, ASU dean of humanities. “They are evidence that the Center for the Study of Religion and Conflict, now in its 16th year, continues to flourish by expanding its mission, widening its public outreach and engaging with some of the most important problems of our day.”

Discoveries Tempe campus The College of Liberal Arts and Sciences Center for the Study of Religion and Conflict School of Life Sciences School of Historical, Philosophical and Religious Studies Walter Cronkite School of Journalism and Mass Communication