Growing up in California, Julian Lim, assistant professor at the Arizona State University School of Historical, Philosophical and Religious Studies, was surrounded by a multiracial family and community.

However, she found that the reality of the “melting pot” she lived in was rarely reflected in her college history courses. “I wanted to dig into and describe a past that was much more diverse, where people mixed and identities seemed more fluid.”

The culturally diverse past of the U.S.-Mexico border is described in her first book, “Porous Borders: Multiracial Migrations and the Law in the U.S.-Mexico Borderlands.”

The book, which draws from her own experiences and research to paint a new multiracial picture of the region, was awarded the 2019 Institute for Humanities Research (IHR) Book Award for outstanding humanities-based scholarship.

Of her book, Lim said, “One of the main messages that I want people to understand is that there has always been mixing in the United States.

“Many Americans would assume that because I am talking about the U.S.-Mexico border, that my subjects were primarily Mexican and Anglo-American. But in fact, the border region was home to diverse indigenous peoples long before any European arrived, and became home to a much more heterogeneous population by 1900 (including many Chinese and African American migrants).

“And it could have continued to grow in diversity, were it not for the passage of increasingly restrictive federal immigration laws that were designed to exclude racially undesirable immigrants.”

In her book, Lim argues that nations and governments have long used borders to regulate race and national identity, and that racially charged immigration laws have created a monoracial identity and effectively erased the multiracial reality of the past.

Furthermore, Lim explains that political demands on immigration laws make it difficult for the U.S. to embrace a diverse future.

“Diversity by itself will not produce a ‘postracial’ society,” Lim said. “History, both distant and more recent, shows us how politicians and nativists rely on demographic ‘tipping points’ to drum up support for draconian and exclusionary immigration laws and policy.”

Lim’s new project, which she is currently researching as a fellow at the Stanford Humanities Center, dives deeper into the politics of immigration law in the U.S.

“I am currently working on my second book, which continues to explore the ways in which U.S. immigration law and policy has shaped national identity and demography in the United States," Lim said.

“In particular, it looks at how immigration officials relied on certain ideas and forms of legitimate versus illegitimate marriage to make decisions about who to admit into the country, and by extension, form families and reproduce.”

On receiving the book award, Lim said, “I am honored to be selected for the award. The IHR is a critical institution of intellectual exchange at ASU, fostering conversations about issues affecting the broader community in Arizona and beyond. I am very grateful to have its support.”

Lim will discuss her book “Porous Borders” at the IHR Book Award and Author Reception on Oct. 10. Community members are encouraged to attend to learn more about the book and the multiracial past of the U.S.-Mexico border.

Montana Gov. Steve Bullock will sit down for a one-on-one interview tonight at the Indian Country Today headquarters in the Walter Cronkite School of Journalism and Mass Communication at Arizona State University. It is the first time a presidential candidate will make a visit to a Native newsroom.This election cycle has already made history in other ways: A record number of presidential candidat...

Montana Gov. Steve Bullock will sit down for a one-on-one interview tonight at the Indian Country Today headquarters in the Walter Cronkite School of Journalism and Mass Communication at Arizona State University. It is the first time a presidential candidate will make a visit to a Native newsroom.

This election cycle has already made history in other ways: A record number of presidential candidates have made campaign stops on tribal lands, released official policies on their views of Indian affairs and mentioned Indian Country at various national debates. 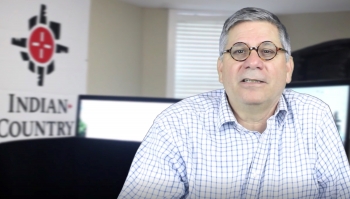 “If you look at the history of this country, the federal government has had a huge role in the lives of American Indians and Alaska Natives. Yet representation — whether running for office or visits from potential office holders — has been far less than adequate,” said Indian Country Today editor Mark Trahant. “But this year seems different.” Download Full Image

“To my knowledge, I don’t know of a presidential candidate who has visited a Native newspaper, radio station or television studio,” said Paul DeMain, former editor of News from Indian Country and a reporter who has covered Indian Country for more than 45 years. He is a citizen of the Oneida Nation of Wisconsin. The Sequoyah National Research Center, home to the American Native Press Archives, also has no previous knowledge of such an event.

This visit comes after an invitation for all presidential candidates to join Indian Country Today for an in-depth interview to talk all things Indian Country leading up to the 2020 election. The conversation will be moderated by editor Mark Trahant.

“If you look at the history of this country, the federal government has had a huge role in the lives of American Indians and Alaska Natives. Yet representation — whether running for office or visits from potential office holders — has been far less than adequate,” Trahant said. “But this year seems different.”

Eleven candidates met with tribal leaders at a presidential forum in Iowa, Trahant noted, followed by the Indian Country Today interview with a presidential candidate at Cronkite.

“This is huge. It’s a chance to frame the discussion before the election,” he said. “And it’s worth noting that many of the candidates we talk with could end up in different areas of the government, including the cabinet. So it really does raise the discourse for Native Americans.”

Indian Country Today moved this summer into the Cronkite School.

“Indian Country Today is making tremendous strides under Mark’s leadership toward deeper and better coverage of Native American communities,” said Cronkite School Dean Christopher Callahan. “We are very proud of our partnership with Mark, and there will be more to come as we continue to expand and intensify our focus on Native American news coverage and bringing more Native Americans to America’s newsrooms.”

Bullock was one of the 11 candidates to participate at last month’s Frank LaMere Presidential Forum on Native Issues. He made his remarks and answered questions from a panel of tribal leaders via video conference call. Bullock pointed to his track record working with Montana’s seven tribal nations. He also appeared at the Meskwaki Powwow in July.

“Gov. Bullock is looking forward to talking about his partnership with tribal governments and his state legislature’s Indian Caucus, and the real progress they have been able to make together — on health care, economic development, public safety, cultural preservation and more,” said Nathan Stein, spokesman for the Bullock campaign.

Bullock is one of a handful of candidates who addressed Indian Country recently. He has been actively campaigning in Indian Country, highlighting his work as governor. He granted funding for language preservation programs, worked to combat Native youth suicide and vowed to investigate the epidemic of missing and murdered indigenous women.