The creative writing program at The College of Liberal Arts and Sciences hosted Row on Sept. 17 for a discussion and Q&A on his recent essay collection, “White Flights: Race, Fiction, and The American Imagination.” 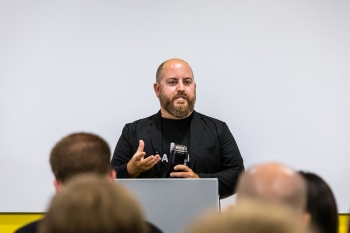 Novelist Jess Row speaks at an event on Sept. 17 at The College of Liberal Arts and Sciences at ASU. Photo by Bruce Matsunaga Download Full Image

“White Flights” — which was published in August by Gray Wolf Press — analyzes the effects of whiteness in the history of American literature, and is partly addressed to Row himself as a former creative writing student.

Row read an excerpt from an essay in “White Flights” that described the relationship between notable American short-story writer Raymond Carver and his editor, Gordon Lish.

“Essentially, the practice of writing that Lish has taught ever since the 1970s has to do with excising anything that culturally, historically or socially locates the individual,” he said. “The turn is away from thinking about a person’s social reality at all, to a kind of aphasic representation of thoughts or actions as happening in this very empty space.”

According to Row, one of the culprits of this literary trend is the modern incubator of academic creative writing: the workshop.

“It became clear to me, after taking multiple creative writing workshops, that this idea that you’re supposed to be constantly looking for ways to cut your work down was a kind of shame-based methodology,” he said. “You have to ask, ‘What is it about this work ethic of always reducing, reducing, reducing’ — what is that really perpetuating?”

To Row, the reduction of cultural details in creative writing represents an attempt by mostly white authors to “other-ize” people of different social and racial backgrounds.

“Oftentimes in the writing workshop, what’s essentially meant by doing this is stripping away cultural context,” he said. “Anything that locates the story in a particular linguistic community or ethnic community — all of that is the material that’s supposed to be excised.”

Matt Bell, the facilitator of the event and director of creative writing at ASU, said literary communities at ASU haven’t yet had the kind of conversations about race Row initiated.

“Race is obviously an important subject in America and in writing, and we often don’t talk about it through the lens of whiteness and how white writers write about race,” he said. “I’m hoping that this is a conversation that we haven’t had as much as we could, and that this is a chance to begin or further that in different ways.”

Bell stressed the importance of lineages when it comes to creative writing, and that mentor relationships with their mentees can often perpetuate the style of writing Row discussed.

“Jess was talking about the way he was taught as a writer,” he said. “Some of the people he mentioned taught or influenced me, and so in some ways, it’s thinking about what we want to pass on as teachers or what we don’t want to pass on.”

Tara Ison, an attendee of Row’s speech and a professor of English at ASU, said Row “makes me question my own privilege.”

“As a woman, I'd always read Carver through the lens of gender, not race,” she said. “Listening to Jess Row, I’m grateful for him giving me the three-dimensional-ness of this issue.”

“I’m white, so it’s easy for me not to think about the ‘whiteness’ of it,” she said. “But Jess's writing makes me want to revisit my relationships with other writers, and my own privilege, that I haven’t looked at enough. He’s keeping me on my toes — on my white toes — in a way that I need to be.”

Phoenix Mayor Kate Gallego faced a room of middle schoolers from Phoenix’s Creighton School District as she shared a few candid stories about when things didn’t go exactly as she planned in her life, and how she turned those defeats into learning opportunities. “I did run for student government, but I didn’t win. Though look where I ended up,” said Gallego, now mayor of the nation’s f...

Phoenix Mayor Kate Gallego faced a room of middle schoolers from Phoenix’s Creighton School District as she shared a few candid stories about when things didn’t go exactly as she planned in her life, and how she turned those defeats into learning opportunities.

“I did run for student government, but I didn’t win. Though look where I ended up,” said Gallego, now mayor of the nation’s fifth largest city. “Sometimes things don’t go the way we planned, but that is a test for our strength. It’s important to keep pursuing our goals.” 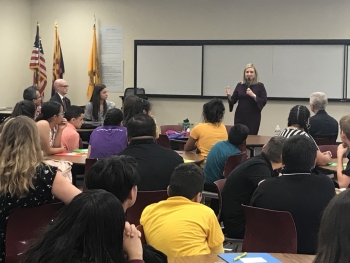 Gallego was a guest speaker at a day of workshops Arizona State University’s Mirna Lattouf had organized in partnership with the Creighton Community Foundation and Rotary International, for which she serves as director of youth services for the Southwest. Lattouf, a principal lecturer in ASU’s College of Integrative Sciences and Arts, wanted to create a relationship with these groups to help introduce students in the community to ideas, skills and opportunities.

“Students worked on exercises that advance their own well-being and were introduced to helpful skills that build community, service, and leadership,” Lattouf said, in summarizing the goals of the “Leadership Through Service: Living Our Humanity” workshop.

Duane Roen, dean of the College of Integrative Sciences and Arts, introduced Gallego to the students. He emphasized that it’s important for students to start thinking about leadership now.

“It’s crucial that we do these types of workshops to help young people understand that they are the leaders of tomorrow and that they can make a positive impact in their communities,” said Roen, who also believes that it’s important for young people to see role models like Gallego.

“Mayor Gallego brings lots of optimism and people skills and resilience to this work — and a joy that serving your community brings. She also exemplifies additional leadership characteristics that I admire: compassion, empathy, respect for others, a sense of humor, humility, integrity and self-awareness,” he noted.

Both Lattouf and Roen agree that it’s important for ASU to be embedded in the community.

“The ASU Charter states that we have a fundamental responsibility for the economic, social, cultural and overall health of the communities we are in. It’s important that we teach that by example,” Roen said.

“At the Downtown Phoenix campus, it is part of our mission to do outreach in our community. ASU, Rotary and the Creighton Foundation all have similar interests in civil awareness and helping children develop their potential,” Lattouff said.

Lattouff plans to make the workshop a yearly event and involve more community partners, services and other schools.