As the fall semester clicks along, some Arizona State University students are reflecting on everything it took to get to college and what it will take to make it to graduation day.

Chacoby Catarino Willis is a first-year student at ASU’s Polytechnic campus studying applied biological sciences. After experiencing some setbacks in high school, the first-generation student said they are thrilled to start at ASU studying something they enjoy (Willis uses the pronoun “they”). 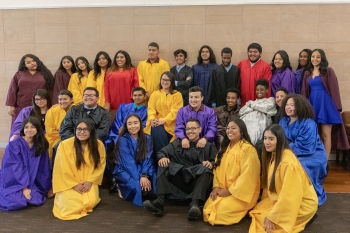 “I have changed tremendously with the help of my friends, teachers, family and Upward Bound,” Willis said.

Willis, who attended Maryvale High School in the Phoenix Union High School District, is an alum of Upward Bound Tempe, part of the federally funded TRIO programs that help motivate and support first-generation students, low-income students, students with disabilities and veterans to prepare for and achieve earning a college degree.

Going to college wasn’t always a given for Willis, who thought about joining the military to escape difficulty at home and struggled with mental health. They worried about affording college and living on campus. Now they have moved into a residence hall and are looking forward to the independence and new experiences that come along with it. Willis said Upward Bound helped to carve a path to college and prepare for what’s ahead.

“The summer program that they offer that I did for three summers helped me get a grasp on how to time manage and manage my money and also grasp how hard college will be,” Willis said. “I will say now that I’m prepared to deal and go to college now because of those summer programs.”

The impact that the programs are having is a ripple effect in access to higher education in Arizona at a time when the first-generation student population is growing and when incoming classes are becoming more diverse each year. According to a recent report on TRIO and GEAR UP’s impact, in the 2018–19 academic year alone, the pre-college programs at ASU reached 2,092 students. College programs reached more than 820 Sun Devils with mentoring and skill building. And 140 veterans were served in Maricopa and northern Pinal counties.

Of the pre-college students served, 100% of Talent Search and Upward Bound West students and 99% of Upward Bound Tempe students went on to earn their high school diplomas. The rates of persistence and good academic standing were above 90% for each Student Support Services program. 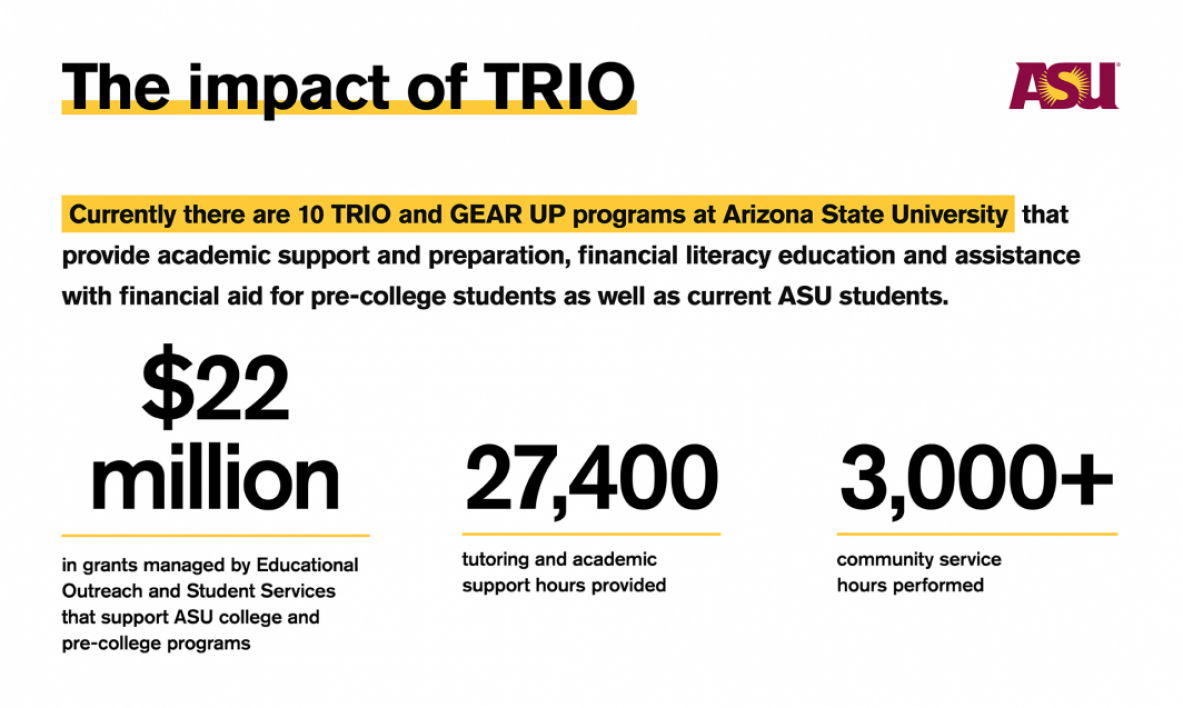 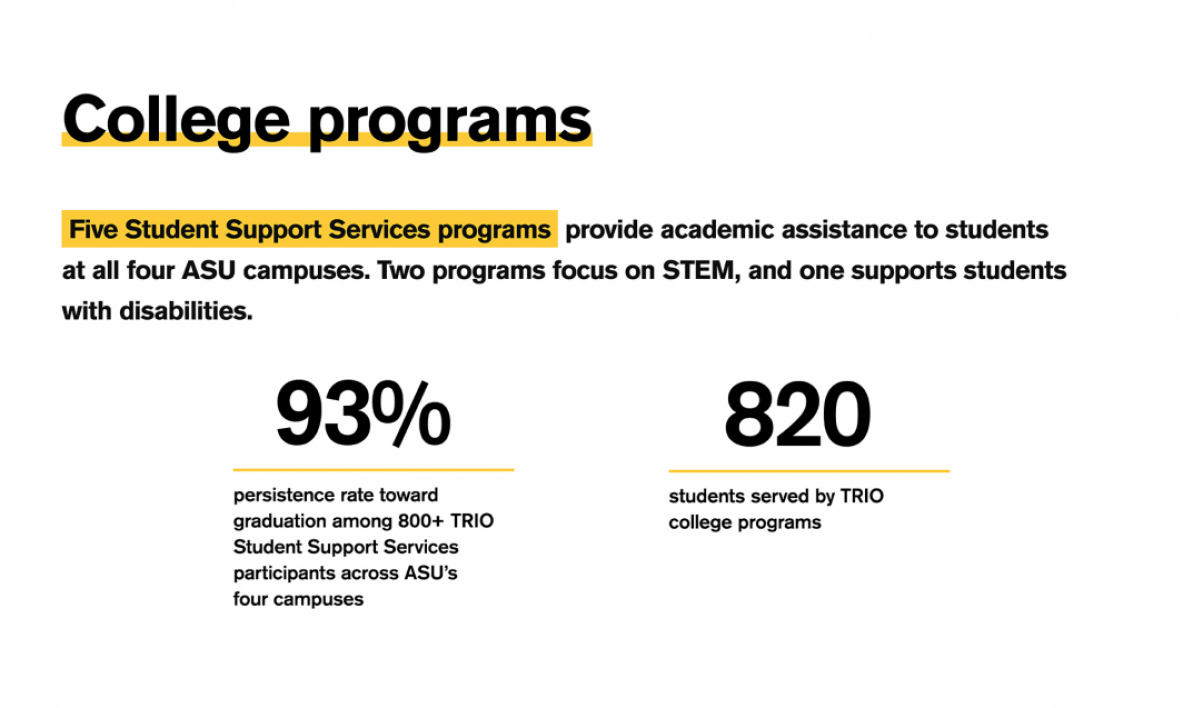 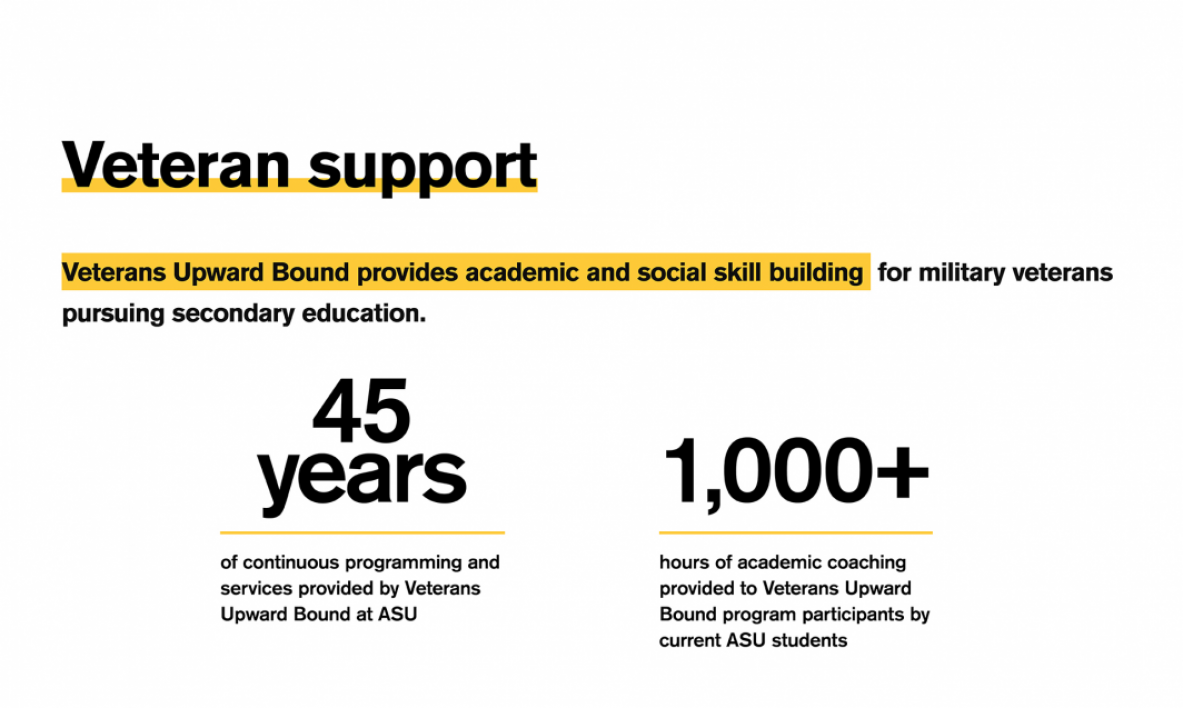 Sylvia Symonds, associate vice president of outreach for ASU’s Educational Outreach and Student Services, said the impact of these programs on access to higher education is significant.

“By supporting high school and college students, as well as veterans, TRIO and GEAR UP programs are helping Arizona move closer toward our Achieve60AZ goal of increasing postsecondary attainment. Our statewide goal is that by 2030, 60% of Arizona adults will hold a postsecondary credential or degree. These programs and others like them will help ensure our state has a thriving workforce and economy.”

Sun Devils such as Travis Luck, a U.S. Navy veteran now studying technological entrepreneurship and management, know firsthand how much TRIO affects whether students have the tools and support they need to overcome barriers and get to graduation.

Luck, who is originally from New Knoxville, Ohio, said Veterans Upward Bound not only solidified his math skills ahead of attending ASU but provided a sense of community.

“The program has given me confidence by showing that there are many resources that I can use and people that I can count on if I ever find myself struggling in a particular class. It has also introduced me to many like-minded individuals who are in the same sort of position as myself. It brings me solace to know that I’m not the only one who is catching up.”

For Jennifer Dueñas, who is majoring in pharmacology and toxicology, the TRIO Student Support Services STEM program at ASU’s West campus meant help with books, supplies and what she considers a campus family. The STEM program offers support specifically to students who are pursuing science, technology, engineering and math.

“TRIO STEM has been a tremendous help in not only providing me resources that I need and would have difficulties acquiring on my own such as books and supplies, but this program has also given me a family on campus formed of … students coming from backgrounds just as diverse and unique as mine. I receive mentorship from my own peers as well as the staff in the program who do all they can to support all their students; their work is truly remarkable,” she said.

The program has also helped Dueñas get a head start on her professional career because of connections with leaders in her industry and guidance on postgraduate work and other opportunities.

“Without my involvement in this program, I dare to say I would be nowhere near as invested in my future as I am now because through this program I gained clarity over what it is that I want to do and how exactly I plan to achieve that,” she said.

Sharon Smith, dean of students at ASU’s Downtown Phoenix campus, said that she takes great pride in the effects these programs have on students’ lives.

“The TRIO and GEAR UP programs’ impact on Arizona students is tremendous,” said Smith.

“By providing necessary academic, personal development and career preparation tools to enroll and complete postsecondary education, these programs not only change the trajectory of a student’s life but also the family’s legacy.”

On a Friday night when their fellow students are starting their weekend, more than 50 Arizona State University students are busy at Devils Invent, embarking on 48-hour journey to design, build and implement innovative solutions.Devils Invent is a series of weekend-long engineering and design challenges for undergraduate and graduate students to devise solutions to problems submitted by the communi...

On a Friday night when their fellow students are starting their weekend, more than 50 Arizona State University students are busy at Devils Invent, embarking on 48-hour journey to design, build and implement innovative solutions.

Devils Invent is a series of weekend-long engineering and design challenges for undergraduate and graduate students to devise solutions to problems submitted by the community, industry and university partners. The events are targeted at students who are committed to making a difference and developing an entrepreneurial mindset — putting into practice the idea of letting one’s curiosity take flight, securing connections and creating value. Members of Team DAAEH (from left, Alexander Hollar, Andrew Deros, David Manford, Emmanuel Hanson, Hasan Nurulhaq) developed Memory Glass, a product intended to help patients with Alzheimer's with real-time reminders of the identities of the people they are currently speaking with. The team developed the concept during Devils Invent: Invent for the Planet and presented their project in College Station, Texas. Photo courtesy of Devils Invent Download Full Image

“On the first night, everyone gathers and the events of the weekend are laid out,” said Andrew Deros, a mechanical engineering and industrial design double major in the Ira A. Fulton Schools of Engineering and the Herberger Institute for Design and the Arts. “After that meeting people spread out, find their teams and jump right in. A lot of the first night is brainstorming and coming up with a plan for the next two days. About midnight everyone goes home for a good night’s sleep because the next two days it’s go time.”

A meeting of the mindsets and skill sets

Teams have the freedom to build and prototype creative ideas to solve needs such as advancing health informatics, providing access to clean water, improving quality of life and connecting communities around the world. In the process, students get to know their classmates and learn something about themselves.

“If you’re having trouble finding a place to fit in, especially in a major with a large number of students, [Devils Invent] is a great opportunity to start meeting new people,” said Deros. “Not only that, but you get to have fun doing what engineering is about, instead of the tedious math and science classes.”

All innovators need to start somewhere, so no experience is required to participate in Devils Invent. It’s also an opportunity for students to learn from their peers.

“It doesn’t matter what skill sets you have because everyone gets a team and any skill is a good skill to bring to the table,” Deros explained. “Even if it turns out that your skills aren’t quite up to others, everyone’s willing to teach and hang out.”

Inventing on a global scale

Devils Invent is an ideal training ground for Deros, who wants to pursue a career in product development, improving people’s quality of life by making work and home life more efficient. Last spring, he and four other Fulton Schools students formed Team DAAEH at Devils Invent – Invent for the Planet, a unique Devils Invent event hosted by Texas A&M University.

Students can organize teams in advance or form one at the event, where they are challenged to devise potential solutions to global challenges.

One of the Team DAAEH members is Alexander Hollar, a chemical engineering major from Surprise, Arizona, who participated in Invent for the Planet as a first-year student as an opportunity to try new things.

“I thought that it would be great for furthering my knowledge of the engineering mindset, as well as give me the ability to learn how to apply myself to complex tasks and issues,” said Hollar. “My favorite part was the challenge of creating something new and substantial with a team of people you haven’t met before.”

In the global challenge, teams of college students from more than 26 universities around the world worked simultaneously and virtually. Top-performing teams were invited to travel to Texas to take part in the final round of presentations.

Team DAAEH, which won the “people’s choice” vote, presented their prototype Memory Glass. The memory glasses are designed to help people with Alzheimer’s disease remember names by providing real-time reminders of a person’s identity. Using facial recognition input, the glasses compare image captures to a database of known individuals to process whether it is someone familiar or unknown. If the individual is known, the glasses display the person’s name and relationship.

“It was awesome to see so much diversity all working towards the same thing — to help people,” said Deros.

Back in Tempe at Devils Invent, the 48 hours wind down and teams are finalizing their prototypes and perfecting their presentations. Then they gather to watch each other’s presentations and wait for the judges to deliberate and announce the winners.

After the awards are handed out, Deros reflects on the lessons he learned during the marathon event.

“I learned a lot about prototyping, and just the fact that a team could focus for two days and pull something really cool out of thin air is amazing,” Deros said. Then after 48 hours, “people shake hands and everybody goes back to their schoolwork that’s due on Monday.”

In the end, for Deros, the experience helped to assure him that he is on the correct path.

“It instilled a boost of confidence going into my next semesters,” said Deros. “It reassured me that I’m meant to be a designer and an engineer, which is probably the biggest thing I am grateful for.”