Elizabeth Rapacz began her college career at Arizona State University two weeks earlier than her first-year student peers by enrolling in the Early Start Program. The first-generation student was inspired by her own personal health challenges to earn a biochemistry degree, with the goal of becoming a neurosurgeon, but she felt a little lost as to how to navigate college. 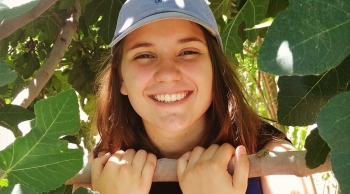 Rapacz is a first-generation American whose parents immigrated to the United States from Poland and met in Phoenix. She grew up in Pinetop, Arizona, and at the age of 5 was diagnosed with Type 1 diabetes. This life-altering diagnosis and the close bond she formed with her endocrinologist would be the biggest influences in her choice of a college major and career goals.

“I want to keep the legacy my endo taught me of actually caring for people and helping them through their struggles,” said Rapacz.

Rapacz is pursuing her dream of attending a university and one day having a medical practice to help serve low-income families in the community. She entered ASU through the Early Start program, developed personal relationships with her peers and mentors and found a support system and resources through the School of Molecular Sciences.

The Early Start program gave Rapacz a chance to do a test run of what college was going to be like and let her explore her interests and get involved with campus activities. She has joined eight clubs and is looking forward to networking with her peers and professors and finding an internship for hands-on experience in her major. And although she is majoring in biochemistry, she intends to study abroad and take advantage of every opportunity her college experience presents.

“My experience in the Early Start School of Molecular Sciences program was absolutely amazing. I met awesome peers and mentors who really gave me an idea of how college is going to be,” said Rapacz. “It also gave me a best friend and a close-knit group of friends I could go to before classes even started.”

Responding to steady growth in English and film and media studies programs and to Arizona State University's largest class of first-year students ever, the Department of English at ASU has added dozens of new teaching, research and administrative faculty to its ranks.English houses six humanities areas of study in creative writing; secondary education; film and media studies; linguistics and app...

Responding to steady growth in English and film and media studies programs and to Arizona State University's largest class of first-year students ever, the Department of English at ASU has added dozens of new teaching, research and administrative faculty to its ranks.

English houses six humanities areas of study in creative writing; secondary education; film and media studies; linguistics and applied linguistics; literature; and writing, rhetorics and literacies. In addition, the department is the site of the university’s Writing Programs — the composition courses taken by almost every first-year ASU student. This year, the number of those students has increased exponentially: Writing Programs has more than 800 more students enrolled now than at this time last year. 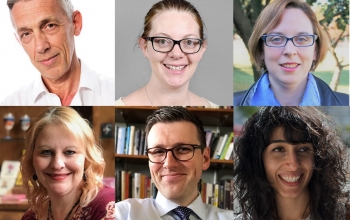 It is into this vibrant and expansive environment that The College of Liberal Arts and Sciences, English’s parent college, invested resources to meet student demand with increases in teaching faculty; in fulfillment of ASU's twin goals of both excellence and inclusivity, English has three new tenured and tenure-track faculty, one new online director, two new lecturers, 17 new instructors, 20 new teaching associates/assistants and five new faculty associates.

Meet some of English’s newest award-winning scholars, teachers and artists:

Sir Jonathan Bate joins ASU as a Foundation Professor of environmental humanities with a joint appointment in the Department of English and the Global Futures Laboratory and School of Sustainability. Coming from Oxford University, Bate is an international leader in green thinking and applied humanities, with scholarly expertise in sustainability as well as in Shakespeare and Renaissance literature, Romantic literature, biography and life-writing, contemporary poetry, visual culture and theater history. In 2015, he became the youngest person ever to be knighted for services to literary scholarship.

Bate spent part of the spring 2019 semester on the ASU campus as distinguished visiting professor, where he co-taught (with Professor Mark Lussier) the English course, “Environmental Issues in Literature & Film.”

Emily Cooney is a specialist in environmental rhetorics, place-based literacies and second-language writing pedagogy. With a focus on access and representation, she is at work with fellow writing teacher Courtney Fowler on a funded project designing and creating an interactive map of digital and technological resources for students on the Tempe campus. Cooney is employing a research method known as “multimodal,” which utilizes many ways of production, inquiry and “knowing” in order to reach desired goals. Her other work — on analyzing how global NGOs’ idealized representation of Indonesian rice farmers helps or hurts — is also informed by this methodology. Cooney holds a PhD in English (rhetoric, composition and linguistics) from ASU and an MA in English literature from the University of Charleston.

Andrea Dickens teaches a wide variety of Writing Programs classes and is particularly focused on working with students from diverse backgrounds and cultures in both first-year and advanced writing. Her research interests span rhetoric, religion, literature and creative writing; her book “The Female Mystic” (2009) looks at medieval women's textual legacies. Her current projects include approaches to writing across the curriculum and developing a rhetoric for the creative process. She is also at work on a book-length study of the work of Mechtilde of Hackeborn and has just completed a book of poetry. Dickens holds a PhD in theology, ethics and culture from the University of Virginia and master’s degrees in creative writing (Ohio State University) and religion (University of Virginia and Yale).

The complexities of running five online programs as well as building, teaching and maintaining dozens of online courses each year will now be managed by new Department of English faculty member Kathleen Hicks. Hicks brings expertise in instructional design and curriculum development — with specialties in program design, assessment of student learning and the development of microcredentials — from former positions at Grand Canyon University and with Dream Center Education Holdings. She has also previously taught composition in ASU’s English department.

Hicks continues in her associate editor role at The Steinbeck Review, a journal on the life and works of American novelist John Steinbeck that is published by Penn State University Press. She holds a PhD in English (literature) from ASU, a Master of Arts in English and American literature from the University of Texas at El Paso and a graduate certificate in instructional design from George Washington University.

ASU Writing Programs has new leadership this fall. Kyle Jensen takes the reins from the longtime director, Professor Shirley Rose, who assumed presidency of ASU's University Senate for the 2019-20 academic year. Jensen arrives at ASU from the University of North Texas, where he was on the English faculty and was director of first-year writing.

With research that explores modern rhetorical theory and rhetorical education, Jensen most recently published “'The War of Words’ by Kenneth Burke” (2018), a co-edited version of a lost work by an influential rhetorical critic, which Jensen and another scholar independently discovered in the Penn State library archives. The manuscript’s recovery and publication has been called “field-changing work” and a “remarkable feat” by scholars in the field. Jensen has written about this research for the general public as well, linking it to current political rhetoric in the editorial republished in Slate and The Daily Beast, “How the media encourages — and sustains — political warfare.”

Poet Solmaz Sharif comes to ASU from Stanford University, where she was Jones Lecturer in creative writing. Her first book, “Look” (2016), won an American Book Award and was a New York Times “notable book” and a Publishers Weekly “best book of 2016"; it was also a finalist for the National Book Award and the PEN Open Book Award. Sharif has been a visiting scholar at the Radcliffe Institute (Harvard) and has taught at Tin House and Kenyon Review writers workshops. She was also managing director of the Asian American Writers Workshop in New York, a renowned institution created to support literary and civic conversations among Asian American artists throughout the U.S.

Sharif has received fellowships from the Lannan Foundation and National Endowment for the Arts and poetry prizes from Princeton University and the Rona Jaffe Foundation. She holds a Master of Fine Arts in creative writing (poetry) from New York University.