Nearly 1 in 4 Arizona teens have used a highly potent form of marijuana known as marijuana concentrate, according to a new study by Arizona State University researchers.

Among nearly 50,000 eighth, 10th and 12th graders from the 2018 Arizona Youth Survey, a biennial survey of Arizona secondary school students, one-third (33%) had tried some form of marijuana, and nearly a quarter (24%) had tried marijuana concentrate.

Marijuana concentrates have about three times more THC, the constituent of marijuana that causes the “high,” than a traditional marijuana flower. This is concerning because higher doses of THC have been linked to increased risk of marijuana addiction, cognitive impairment and psychosis, said the study’s lead researcher, Madeline Meier, an ASU assistant professor of psychology.

“This is important because it shows that teens who have a diverse array of risk factors for developing marijuana addiction may be further amplifying their risk for addiction by using high-THC marijuana concentrates,” explained study co-author, Dustin Pardini, an associate professor in ASU’s School of Criminology and Criminal Justice.

The study "Cannabis Concentrate Use in Adolescents," is published in the early online edition (Aug. 26, 2019) of Pediatrics.

The team — which includes ASU researchers Meagan Docherty, School of Criminology and Criminal Justice; Scott Leischow, College of Health Solutions; and Kevin Grimm, Department of Psychology — also found that teens who had used concentrates had much higher rates of e-cigarette use. One explanation for this might be that teens are using e-cigarettes to vape marijuana concentrate, according to Meier. Earlier studies, including those by Meier, have shown that youth put marijuana in e-cigarettes to conceal their marijuana use.

“Vaping marijuana can be passed off as nicotine vaping,” Meier explained.

This finding reinforces the recent decision by the Food and Drug Administration to impose new restrictions on e-cigarettes and their constituents as a means of reducing marijuana use, according to the researchers.

Marijuana concentrates don’t look like the traditional marijuana flower. Concentrates can look like wax, oil or a brittle substance that shatters easily.

Meier’s earlier research suggests that frequent marijuana use from adolescence through adulthood is associated with IQ decline. Pardini’s prior research has linked regular marijuana use during adolescence with the emergence of persistent subclinical psychotic symptoms.

The researchers’ next steps are to ascertain if concentrate users do in fact exhibit higher rates of addiction, cognitive impairment and psychosis.

In the 70 years since the signing of the North Atlantic Treaty established an international alliance to prevent future devastation like that which was wrought during the First and Second World Wars, threats to the liberal democratic way of life continue — from Russian military occupations to religious conflicts in Turkey to civil unrest in China.This summer, Paul Carrese, founding director of A...

In the 70 years since the signing of the North Atlantic Treaty established an international alliance to prevent future devastation like that which was wrought during the First and Second World Wars, threats to the liberal democratic way of life continue — from Russian military occupations to religious conflicts in Turkey to civil unrest in China.

This summer, Paul Carrese, founding director of Arizona State University’s School of Civic and Economic Thought and Leadership, addressed these and other issues of concern at the Black Sea and Balkans Security Forum in Romania. 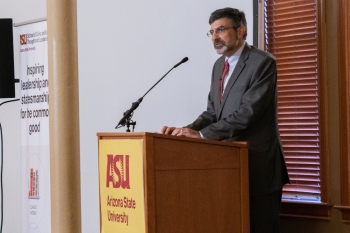 “Both American leaders and the leaders of the Three Seas InitiativeThe Three Seas Initiative is a forum of 12 states in the European Union, located in Central and Eastern Europe, that aims to create a regional dialogue on a variety of questions affecting the member states. states know that it is in the enlightened self-interest of all the liberal democracies to support each other, globally, in an era of unprecedented global connectedness but also uncertainty and threats,” Carrese said.

The annual forum seeks to enhance the security cooperation as well as political and economic cooperation among a dozen states bordering the Baltic, Black and Adriatic seas. Other speakers included distinguished current and former diplomats from greater Europe and the U.S., current and former generals from NATO member states, scholars, institute directors and observers from NATO and the European Union.

Ileana Orlich, President’s Professor of Romanian studies and comparative literature in the School of International Letters and Cultures at ASU, was instrumental in helping to arrange ASU’s involvement in the forum. A native of Romania, Orlich first arrived at ASU as a graduate student in 1977. In 1998 she established the Romanian language program, with only 10 students. Since then, it has expanded into the largest Romanian studies program in the world and the only freestanding Romanian studies program in the U.S. In 2018, Orlich was honored with high distinction by the president of Romania, Klaus Werner Iohannis, for her efforts to promote the Romanian language and national identity abroad. 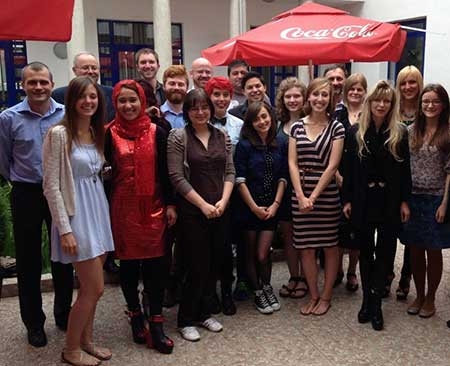 ASU Now asked Carrese and Orlich to provide some insight into the issues currently at play in central Europe and the Black Sea region.

Question: What were some topics of concern at the forum?

Carrese: I addressed the reasons why, as a matter of the grand strategy and foreign policy of these liberal democracies in central Europe, it is a very good idea to pursue a regional initiative on security cooperation and economic development from the Baltics to the Adriatic, including the states on and near the Black Sea. This makes great sense for these dozen or so states in central Europe, making plans for peaceful mutual development among states with shared principles, values, forms of government and market economies. This also is an important initiative given the threatening posture and actions of the Russian government under President Putin against liberal democracies in the region, and against other former states of the Soviet Union, from the Baltic states to Ukraine and Georgia.

Q: Why should Americans be concerned about security in the region today?

Carrese: Our security and prosperity have immensely benefitted from being the global leader of an alliance of liberal democracies since the 1940s. The U.S. has worked to expand the number and range of our partners in helping to provide for a more peaceful, stable and prosperous world over the past 75 years. NATO and the trans-Atlantic alliance more generally, to include the European Union, are international pillars of this U.S.-led effort to promote liberal democracy, economic prosperity and security that directly benefits America as well as other states and peoples. The Baltic, Black Sea and Adriatic states are members of NATO or the European Union or both. Serious threats to liberal democratic life in these states now are coming not only from the current Russian government but also from the governments of Iran (not very far from this region, especially given its intervention in Syria) and from China; and while China is seemingly far away from central Europe, it is a very large presence in global economic and security issues, including its current support of illiberal or anti-democratic policies of Russian and Iran.

Orlich: The Black Sea and the Bosphorus, which links the Black and Mediterranean seas, is of great strategic importance as a fault line between Western, Orthodox and Islamic civilizations. The rich history of the Black Sea goes back to the old Greek and Roman civilizations, the Byzantine control of the region and the exploits of the Ottoman Empire competing with Tsarist Russia for supremacy. Today’s Black Sea region remains the arena of conflicting interests for superpowers and regional powers. Putin’s Russia is reasserting itself after the collapse of the Soviet Union ended Russia’s time as a superpower. Russia is militarily involved in Ukraine and Syria and has occupied Crimea and strategic areas in Georgia. To counter that threat, the U.S. is emphasizing its relationship with Romania, a strong U.S. ally and member of NATO since 2004 and the European Union since 2007, and reasserting its presence in the Black Sea. Meanwhile, although a longtime member of NATO, Turkey has been moving away from the West and toward the Islamic world, testing its relationship with the U.S. and the European Union.

Q: How can ASU students benefit from faculty scholarship in this area?

Orlich: The forum, organized by the New Strategy Center based in Bucharest but connected with prestigious universities both in Romania and in the European Union, brings together scholars, high-ranking military personnel and diplomatic representatives to discuss this strategic fault line. ASU students have much to gain from the involvement of faculty at a time when Russia is reasserting itself militarily, Turkey is testing its secular institutions and the U.S. and European Union seek to support the Black Sea democracies born out of the collapse of the Soviet Union and the Eastern Bloc. Covering disciplines ranging from political science to religion, this is a robust academic debate with timely real-world consequences to which ASU can contribute and from which it can gain.