ASU student Will Novak has a plan to beautify the 181 miles of canals that run through Phoenix.

The project recently received an ASU Innovation Challenge grant, which awarded him $2,000 from the School of Historical, Philosophical and Religious Studies to start his project of cleaning up Phoenix canals. 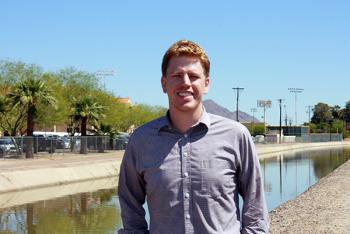 “It would be nice if they were nice. They should have trees and benches, and places you can sit and relax, and water fountains,” said Novak, who is studying public service and public policy in the School of Public Affairs, part of the College of Public Service and Community Solutions.

The Phoenix native plans to use the grant money by starting with the section of the Grand Canal from Central Avenue to 7th Street. This particular section runs across just a few residential homes and three Valley high schools. Novak hopes to partner with these high schools and have them contribute to his project.

“It would be the easiest thing in the world to go to the art classes and get one foot by one foot tiles and have each student paint something of whatever they want – and then you could affix those to the concrete. So now you’ve got a mosaic of student-produced art along the canals,” Novak said.

He hopes these steps to beautify the Phoenix canals can make them more welcoming to families or young people in the area, comparing his idea to places like Paris, New York and Rome.

“You think of these romantic cityscapes and they’re places you want to kiss someone, or be near someone, or have fun, or walk your children, and we don’t have enough of those spaces,” Novak said.

Novak said it’s hard for people to imagine the potential of the canals now because they are so far from where he wants them to be. However, he hopes that by putting his grant toward this half-mile section he can show people how the canals can be turned into a beautiful and fun space for a relatively low amount of money.

Novak says one of the best things about his project is that he feels he is starting with ASU’s approval. He believes that if people hear that a unit within ASU is backing the beautification, then other companies will jump onboard as well. He still needs to get the approval of the Salt River Project (SRP), the company that manages the canals, before he can start on the actual implementation of his project.

Novak credits his citizen engagement and community building professor Daniel Schugurensky for encouraging students to apply to the ASU Innovation Challenge and for being an excellent mentor. He hopes to have the first new-and-improved canal along the Grand Canal Trail completed in spring 2016.

The College of Liberal Arts and Sciences Entrepreneurship

World-famous "Pillars of Creation" image will be the centerpiece of a 25th birthday party for the Hubble Space Telescope, April 24.

One of the most iconic images ever taken by the Hubble Space Telescope – dubbed "The Pillars of Creation" – is the centerpiece for a celebration of the space telescope's 25th birthday at the final Earth and Space Open House of the spring semester, on April 24.

The evening's events will feature two free public talks by researchers at the School of Earth and Space Exploration. The first, given by Christopher Groppi, will focus on how astronomers are launching balloon-borne telescopes from Antarctica to investigate the universe. 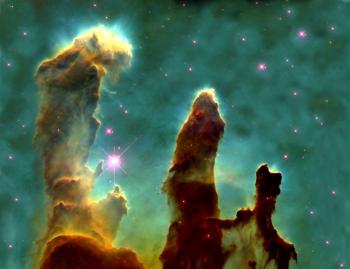 The second talk, by Paul Scowen, is titled "Hubble Greatest Hits." Scowen, who used Hubble to help make the Pillars of Creation image, will tell the fascinating story of star and planet formation through a tour of Hubble's greatest hits.

"Join us for an intimate look at the environment of a stellar nursery and an intriguing connection with the conditions under which our own planet may have formed, all while enjoying some of the best images the Hubble Space Telescope has taken over the past 25 years," says Scowen.

The free talks will be held in at the Interdisciplinary Science and Technology Building IV (ISTB 4) on ASU’s Tempe campus.

All seating is on a first-come basis.

As usual, there will be telescope sky viewing outdoors next to the James Turrell Skyscape art installation from 8 to 10 p.m. (weather permitting). There will also be several exciting demonstrations and activities in the state-of-the-art ISTB4 Gallery of Scientific Exploration by experts in astrobiology, geology, cosmology and planetary science – as well as a free poster.

The open house can be accessed through the main entrance of ISTB 4, located on the building’s north side.

The monthly open house is sponsored by the School of Earth and Space Exploration, GeoClub, AstroDevils: ASU Astronomy Club, Icarus Rocketry, Students for the Exploration and Development of Space (SEDS), the Center for Meteorite Studies (CMS) and many others.

For more information, visit earthspaceopenhouse.weebly.com or visit the school's Facebook event page. This will be the final open house of the spring semester.