At CGI U, “March Madness” is not about basketball: 16 entrepreneurs went head to head in an ideas competition decided by public vote. Rodriguez’s ASU innovation DREAMzone was selected as a top 16 Commitment to Action and went on to win the bracket competition of social innovation, enterprise and sustainability ideas.

DREAMzone aims to establish a national network of allies to support undocumented students. Rodriguez said he was excited to receive the award and see his team's hard work pay off.

Pursuing a master's degree in education and public administration, Rodriguez co-founded the venture, in part, because he believes "university faculty, staff and administrators have an obligation to serve our student body, and that obligation includes having an understanding of the experiences and needs of all students, especially our most vulnerable.”

Arizona State University is one of 33 colleges and universities that joined the CGI U Network and has committed to support, mentor and provide seed funding to ASU student entrepreneurs.

CGI U was launched to bring together the next generation of leaders on college campuses around the world. Students who attend have the opportunity to meet with fellow student entrepreneurs and build a network of like-minded individuals. To attend the meeting, students must develop a Commitment to Action plan that addresses a specific challenge in one of the five focus areas: education, environment and climate change, peace and human rights, poverty alleviation, and public health.

The 21st-ranked Arizona State University baseball team won its second consecutive home conference series with a 14-9 win over No. 11 Oregon in front of 3,148 fans, April 6, at Packard Stadium in Tempe, Ariz.

Freshman Dalton DiNatale pinch hit in the seventh inning and went 2-for-2 with three RBI, and catcher Max Rossiter notched a trio of hits, including two doubles, as ASU racked up nine extra base hits. 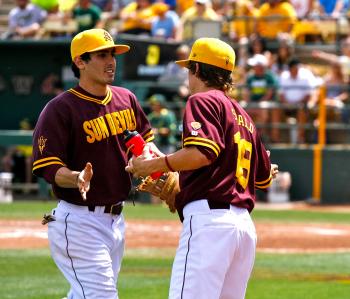 The Sun Devils (19-8-1, 6-5) never relinquished their advantage after taking an early 2-0 lead in the first inning to collect its seventh win over a top-15 opponent this season.

A two-run double by designated hitter RJ Ybarra capped off a three-run fifth inning that gave ASU its largest lead of the game, 7-1, and both teams recorded three runs apiece in the sixth and seventh frames to make it a six-run game heading into the final two innings.

Oregon scored five runs in the top of the eighth inning to move within a run, 10-9, and had the tying run on second with one out, but left-hander Matt Dunbar struck out Brett Thomas and induced a foul pop fly to preserve the Devils' lead.

The Devils put up four runs of their own in the bottom of the eight to stretch their lead back to five, 14-9, and Dunbar (1) closed out the ninth inning to earn his first save of the season.

Starting left-hander Ryan Kellogg (7-0) faced just three batters in four of the first five innings en route to his seventh win of the season despite giving up six runs in the final 2 1/3 frames of his outing. He allowed a total of seven runs, including six earned, on 11 hits to go with five strikeouts and a walk.

Center fielder Kasey Coffman reached first on an error to start the opening frame and then scored on the ensuing play on standup triple by third baseman Michael Benjamin. Second baseman James McDonald followed with an RBI groundout to plate Benjamin and put the Devils ahead, 2-0.

The Ducks (22-8. 8-3) cut ASU's lead in half with an RBI single in the second, but the Sun Devils countered in the third as they fell a home run short of the cycle to begin the frame and extended their lead, 4-1. Coffman tripled, Benjamin singled and McDonald doubled before Rossiter grounded out for the first out of the inning.

UO starting left-hander Tommy Thorpe (4-3) allowed a season-high six runs, including five earned, in 4 2/3 innings, which was his shortest outing in eight starts this year, to take his third loss of the season.

Up Next:
The Sun Devils closed out their three-game series against the Ducks at 12:30 p.m. on Sunday at Packard Stadium. The game will be broadcast on NBC Sports Radio AM 1060 or through the All-Access player on thesundevils.com, and will be streamed live at www.Pac-12.com/live/thesundevils. Fans can also follow the team on Twitter at @ASU_Baseball for live scoring and updates from the weekend, and check thesundevils.com for stats, notes and more.

Game Notes:
The Sun Devils now have seven wins this season over top-ranked opponents...ASU moved to 13-5 all-time against the Ducks.