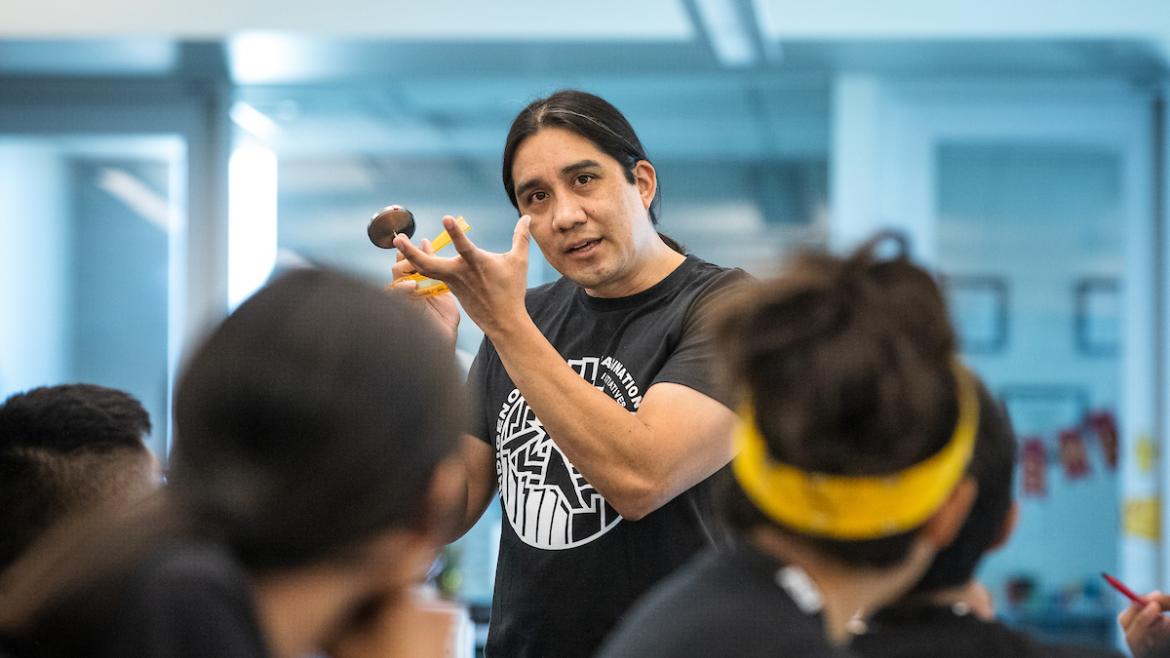 Arizona State University history alumnus Kino Reed regularly teaches O’odham cultural studies and social studies at Salt River High School near Scottsdale, Arizona. But this last week he was back at his alma mater, leading American Indian high schoolers from across the Valley in collaborative design, nation-building and futurism activities in a project called “Engineering the Homeland in 3001.”

"One of my goals was to start helping students to understand that Native knowledge is scientific," said ReedReed is a member of the Gila River Indian Community, Tohono O'odham and Shosone tribes. about his approach. "And at the same time help them understand the engineering field more and then make their own connections between the two."

Reed is one of several instructors and peer mentors involved in the Indigenous Imagination Initiative. The one-week, nonresidential summer program piloted at the ASU Tempe campus July 8–12 engaged youth in projects that asked them to imagine futures for themselves and their nations and connected them to the creativity and inspiration of indigenous people.

The initiative took almost a year to develop, said Jeanne Hanrahan, director of community outreach at ASU’s University College. She said a collaborative effort by ASU colleagues from K–12 outreach in the Ira A. Fulton Schools of Engineering and the Department of English RED INK Indigenous Initiative along with donor support not only made the program a reality for the 27 participants, but allowed them to attend at no cost.

“The program offered students a choice between focusing on an engineering track and a graphic novel track,” Hanrahan continued. “The cohorts shared a common foundation of presentations on storytelling and indigenous futurism then branched out to enjoy a range of workshops to support their projects. We engaged ASU’s indigenous community, including alumni, faculty, staff and students as well as community members to make this happen.”

The engineering cohort was a nice fit for 17-year-old Koi Quiver.

“I have a very mathematic brain, and I like putting stuff together,” said Quiver, who will be a senior at Buckeye Union High School next month. “It incorporates engineering and indigenous stories. I want to learn how to mash those two subjects together.” 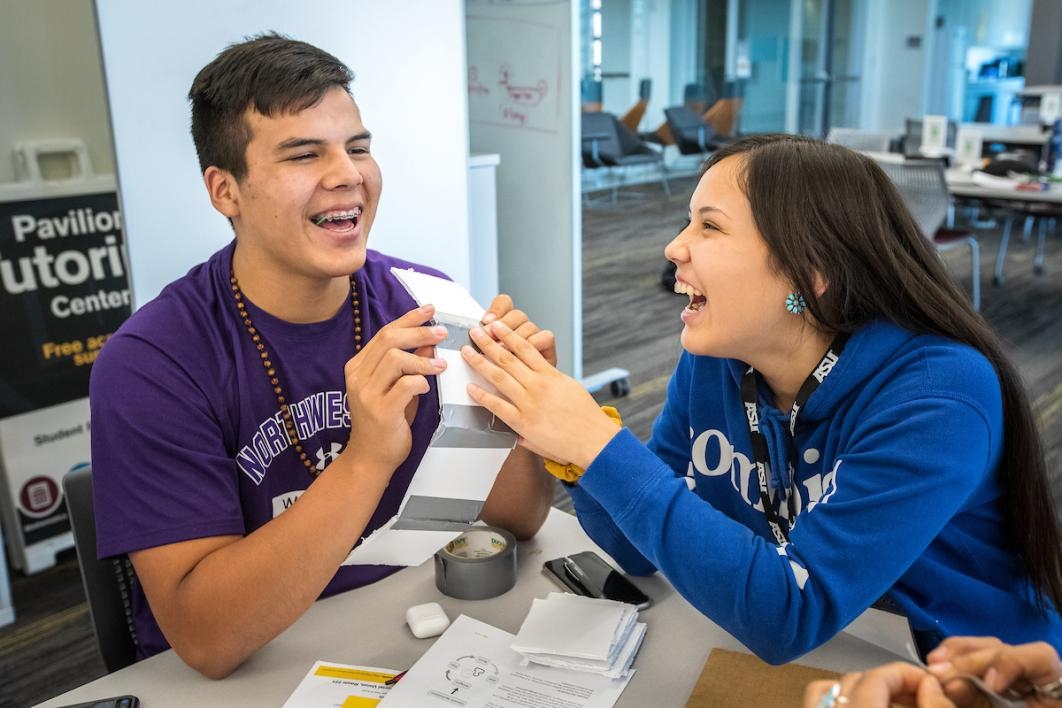 Siblings Kimball, 17, (left) and Mikaye Begay, 16, laugh as they build their octagonal model in an engineering class, part of the Indigenous Imagination Initiative on July 9, 2019. The goal was to build either a traditional or modern structure with the interior eight degrees cooler than the exterior. 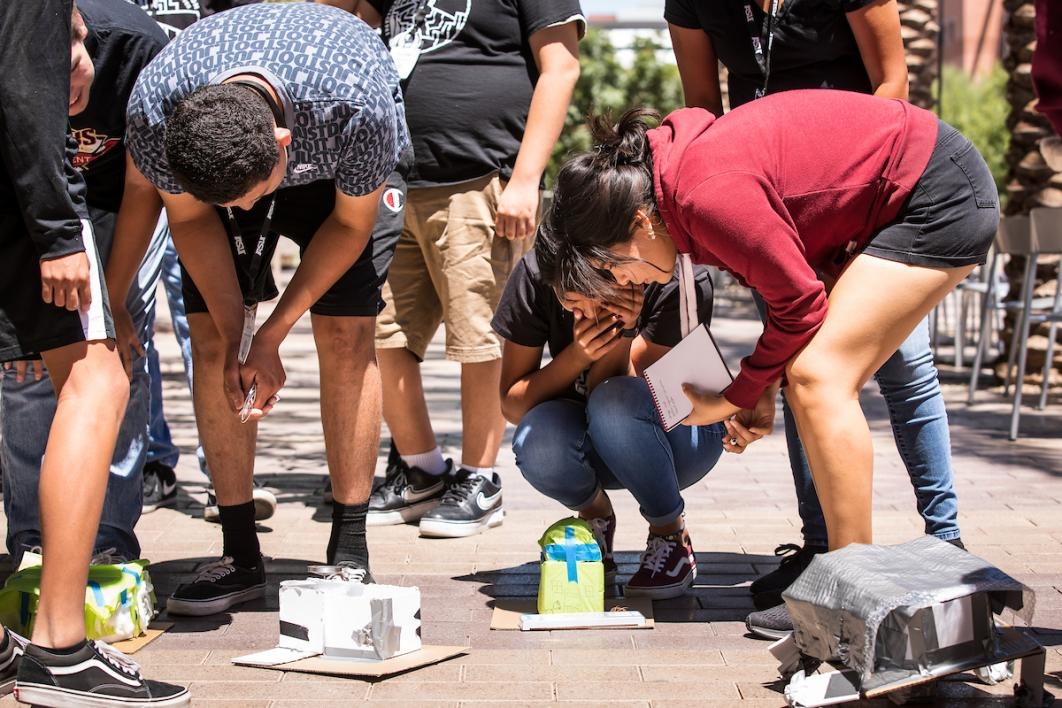 Students check the interior and exterior temperatures of their residential housing models in an engineering class. 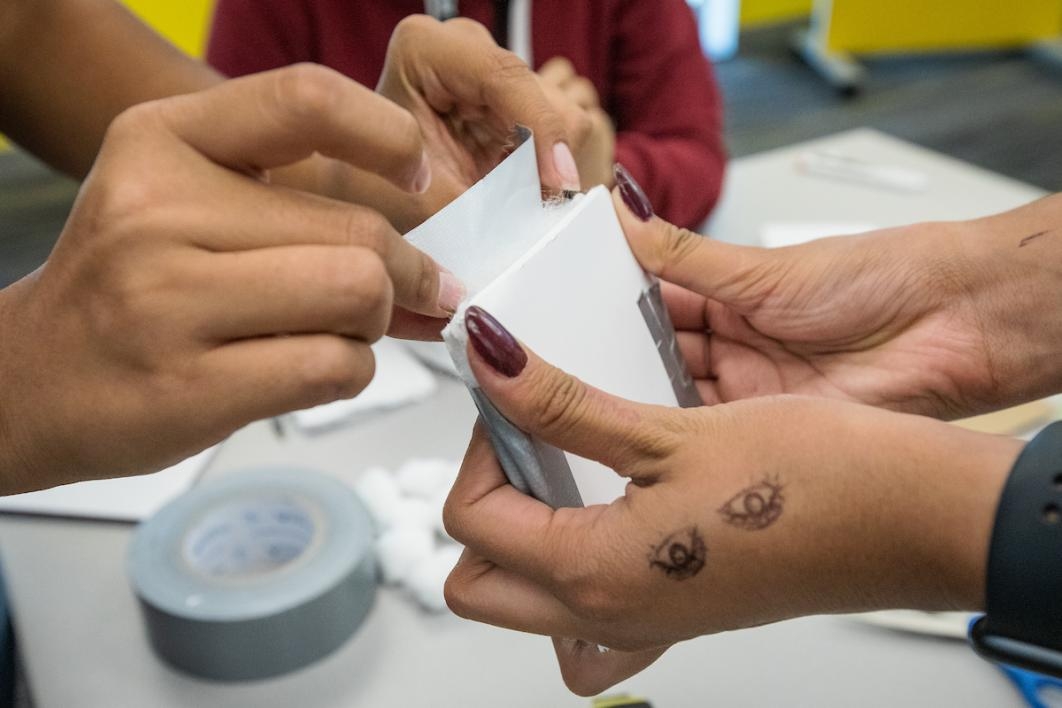 Cit'lali Castillo, 15, of Tempe (left) and Ashley Lopez, 15, of Laveen, build insulated walls as they work on designing and building a residential housing model in an engineering class. 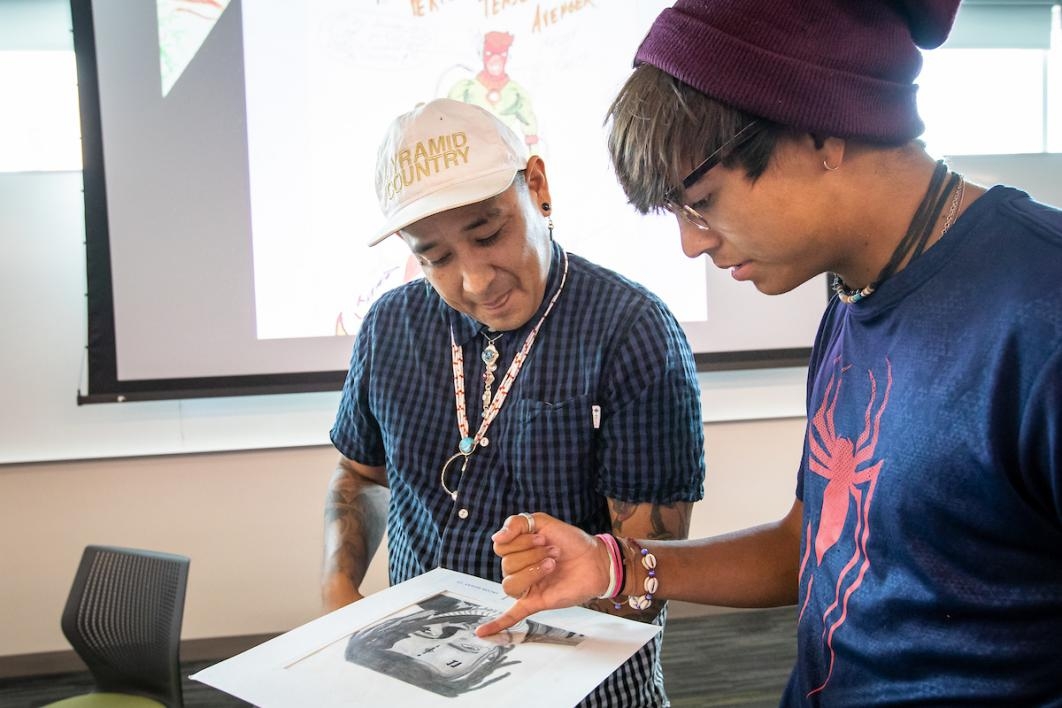 Sixteen-year-old Jacob Begay (right) of Phoenix, talks about one of his portraits with ASU art major Tyson Frank Powless during the graphic novel class on July 11, 2019. The goal is to create a visual and verbal narrative for an original tale. 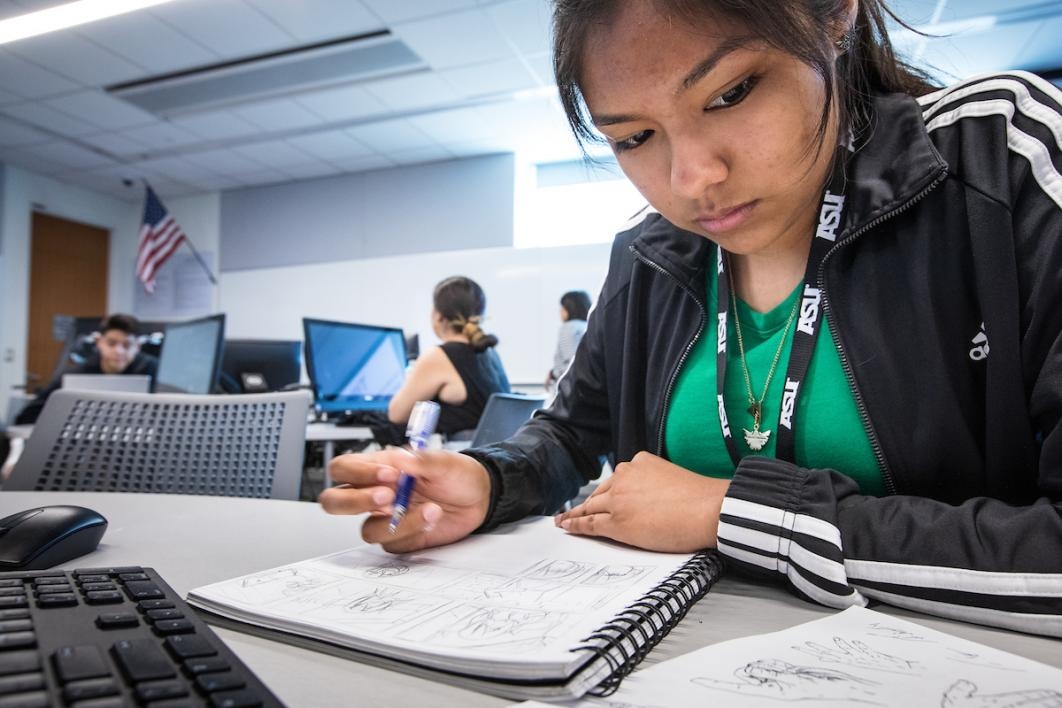 Sixteen-year-old Alana Lopez, of Laveen, refers to a page of hand sketches as she draws a panel for the graphic novel class. 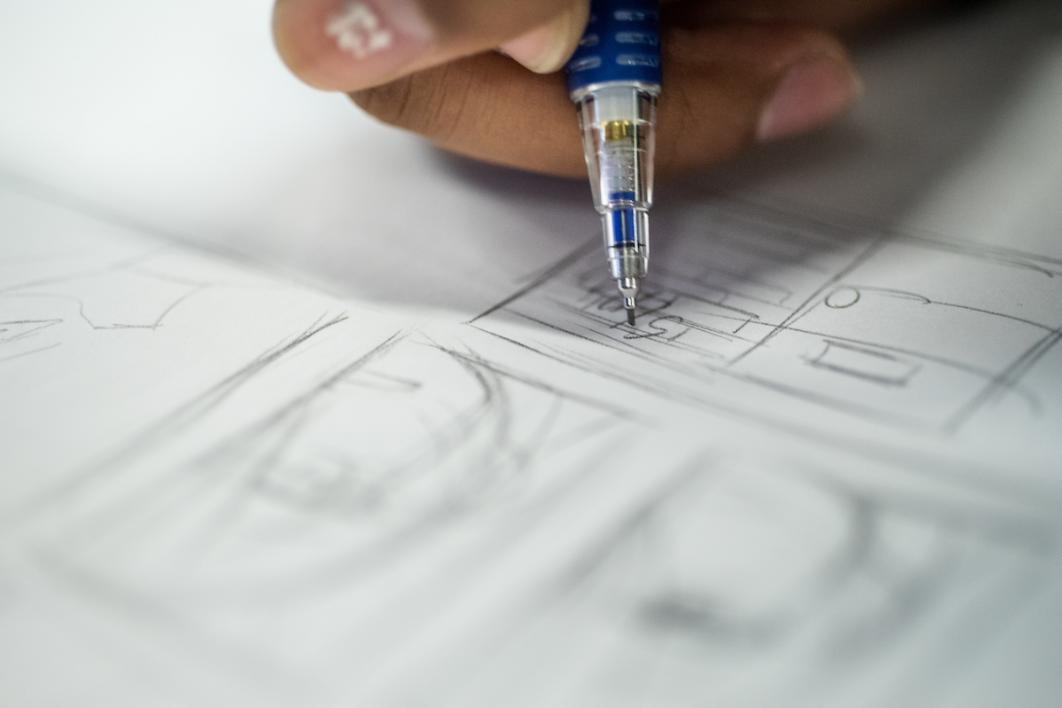 Sixteen-year-old Alana Lopez, of Laveen, sketches dialogue in a panel for the graphic novel class. 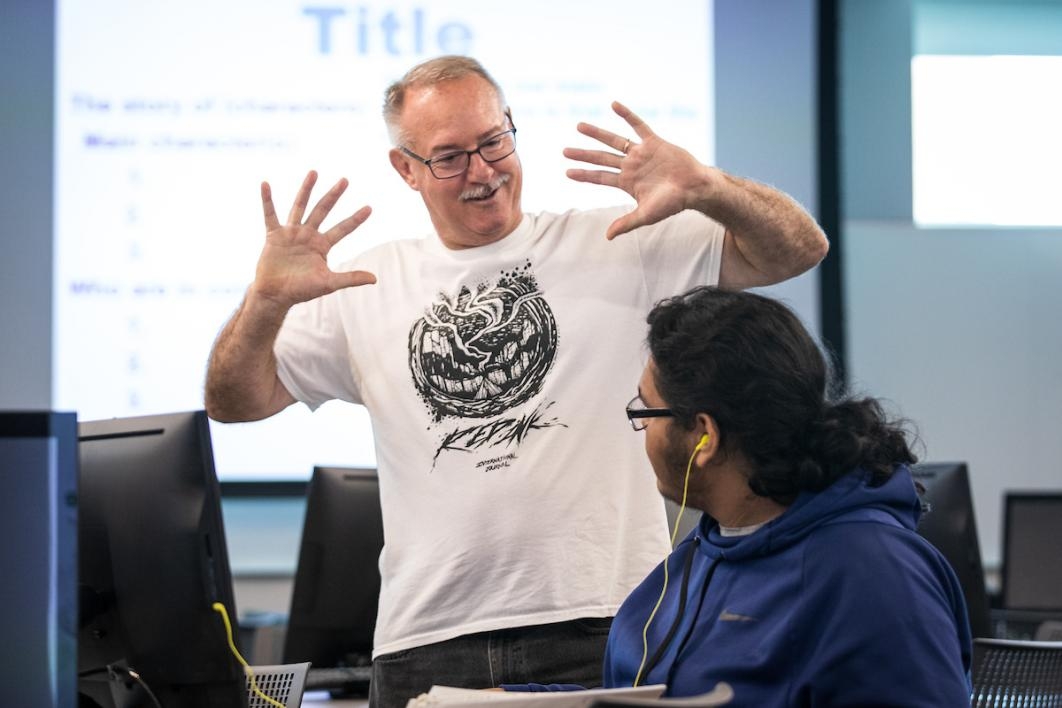 ASU English Professor James Blasingame led the June 10 seminar, “Graphic Novels, the Future and You.” He said, “I’m a professor of young adult literature, and graphic novels are young adult literature on steroids. It requires some delivery on my part because if you’re talking to students about drawing facial movements and body gestures, exaggerating those can be helpful in drawing ’em.”

Jaycee Nez, one of three peer mentors involved in the initiative, said Quiver’s curiosity and skill set warmed her heart.

“I like to see people who look like me and think like me, doing the same things,” said Nez, a chemical engineering major at ASU. “I want to see more Native Americans pursuing careers in engineering. ASU will inspire and guide them towards a better future."

Helping in that endeavor was Tyson Frank Powless, an ASU art major, commercial artist and an art editor for “RED INK: An International Journal of Indigenous Literature, Arts and Humanities.”

“Native youth have to feel safe in a setting away from home and need to relate to someone like me,” said Powless, who is Navajo, Oneida and Iroquois. “We want to get them into a comfort zone and let them know they have the freedom to create whatever they wish.”

Powless said the relationship has also been a two-way street.

“Having them approach me and saying, ‘We want your skills’ has been a blessing to me,” he said. “This is a group of students who will be putting art in future books, and that’s heavy. These kids have talent.”

That was evident to Marlena Candace Robbins, a professional artist who graduated from ASU with a master’s degree in American Indian Studies. Robbins’ workshop, “Art as a Spiritual Expression and Indigenous Well Being,” hit upon several themes, including ancestry and future generations.

“This painting reminds me of my background and encourages me to be more in touch with my culture,” said Nockideneh, who will be a senior this year at Mesa’s Westwood High School. "I’m now inspired to help change and improve things in my community."

Top photo: Salt River High School teacher Kino Reed introduces a project on designing and building a residential housing model in an engineering class, part of the Indigenous Imagination Initiative, on the Tempe campus on July 9, 2019. The goal was to build either a traditional or modern structure with the interior eight degrees cooler than the exterior. The one-week summer program for American Indian high schoolers utilizes cultural knowledge to develop creativity and identity. Photo by Charlie Leight/ASU Now

Muralist Clyde Thompson has big plans for his art

When former graffiti artist Clyde Thompson experienced the European art scene at age 21, he was inspired by the sweep of what he saw.“When I saw the murals in Europe, they looked like pieces of fine art that you’d see in a gallery, just at the scale of 10 to 20 stories tall,” said the Arizona State University alumnus, who graduated in 2016 with a bachelor's in design studies. “And ever sin...

Muralist Clyde Thompson has big plans for his art

When former graffiti artist Clyde Thompson experienced the European art scene at age 21, he was inspired by the sweep of what he saw.

“When I saw the murals in Europe, they looked like pieces of fine art that you’d see in a gallery, just at the scale of 10 to 20 stories tall,” said the Arizona State University alumnus, who graduated in 2016 with a bachelor's in design studies. “And ever since then, that has been my goal to create murals that don't compromise quality and to eventually do something as big as 10 to 20 stories tall.” 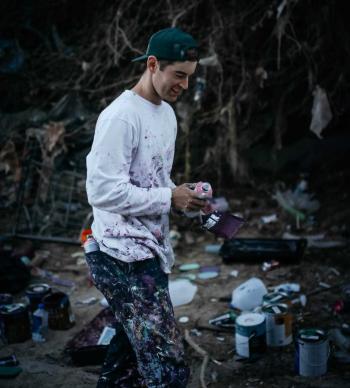 ASU alumnus and muralist Clyde Thompson first was introduced to art at community college, which inspired him to switch from graffiti to murals. Photo courtesy of Clyde Thompson Download Full Image

He'll be getting a chance to create his next mural later this year as part of the Call to Artists initiative, when he paints the Central Avenue side of the Renaissance Phoenix Downtown Hotel. The Call to Artists opportunity was an effort by the hotel and the Downtown Phoenix Partnership, with support by Artlink Inc.

“We want to be the art link organization that helps connect artists, business and communities to create a stronger arts and culture community,” Kahler said.

Thompson is excited for the chance.

“With commissions, you are kind of compromising your art to go with whatever they want,” he said. “With this (Renaissance mural) we were so in sync, and I just get to do my art.”

Although he often figures out the color scheme while he's painting, Thompson predicts he will be using cool colors such as blues and greens to help cool down the hot city.

“There is going to be a lot of moving lines and various shapes and tons of shades of that (sedimentary rock) color throughout the entire wall,” Thompson said, “because there are a ton of shadows that drop over it.”

After graduating high school, Thompson took an art history course at local community college. This was the first time he had been introduced to art, which inspired him to use his spray paint to create murals rather than just writing his name. He went on to complete his studies at ASU.

“Every time I would meet people, they would say, 'You're mysterious,'” Thompson said.

Local storyteller Raina Bowers, who first met Thompson when he was her pizza delivery man in college, calls him intentional and eclectic. 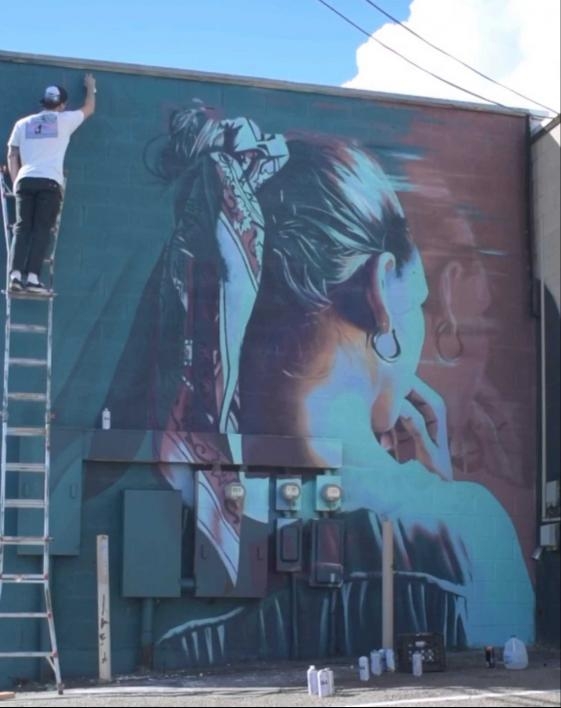 ASU alumnus Clyde Thompson works on “Wherever You Go,” located at Fifth Avenue and McDowell Road in Phoenix. Thompson stands by his “Women in a Dream III” at the Montage apartment complex in Tempe. 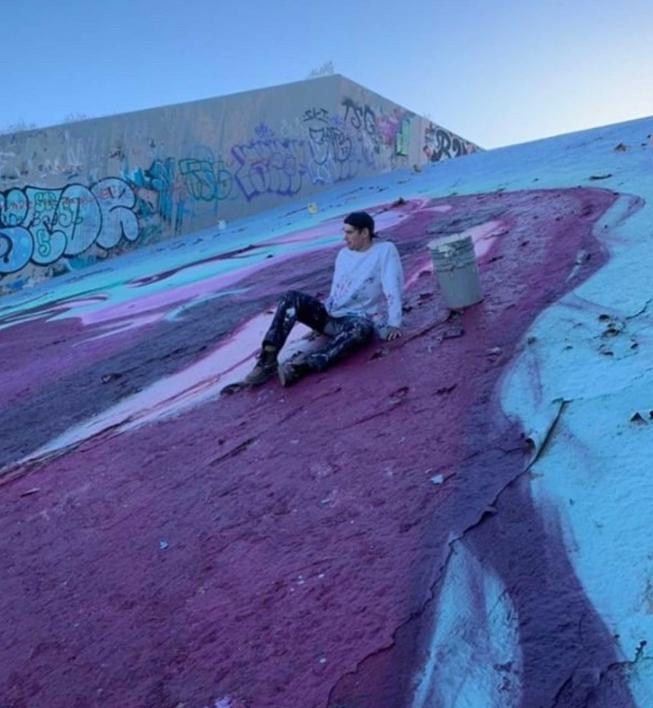 Thompson sits on a large-scale mural painted on a 45-degree wall, his largest creation to date.

“He is one of the kindest, most respectful, thoughtful people out there, and I appreciate that about him very much,” Bowers said.

Thompson — who also makes a living working for a local general contractor and at a local tree-service company, and who spent four months working as a commercial fisherman in Alaska this past year — is both inspired by the scale of murals and realistic about the challenge in that.

“A lot of times murals are compromised because they are so large,” said Thompson, whose largest mural to date was 140 by 50 feet, painted on a 45-degree-angle wall, which he completed within three days.

He is often able to camouflage electrical boxes and pipes, as seen in his murals “Wherever You Go” and “Women in a Dream III.”

Murals elicit immediate feedback from the public — Thompson recalled a middle school kid yelling “It looks terrible!” as he and his mom drove past his last mural, which struck him as funny — and have the unique challenge of being visible while they are still in progress.

“If you’re in an area with a lot of people who are viewing you while you paint, you're not going to finish it in that day, so you are leaving that progressed work out for everyone to view,” he said. “Some people think it’s finished. Some people don’t know where it’s going.”