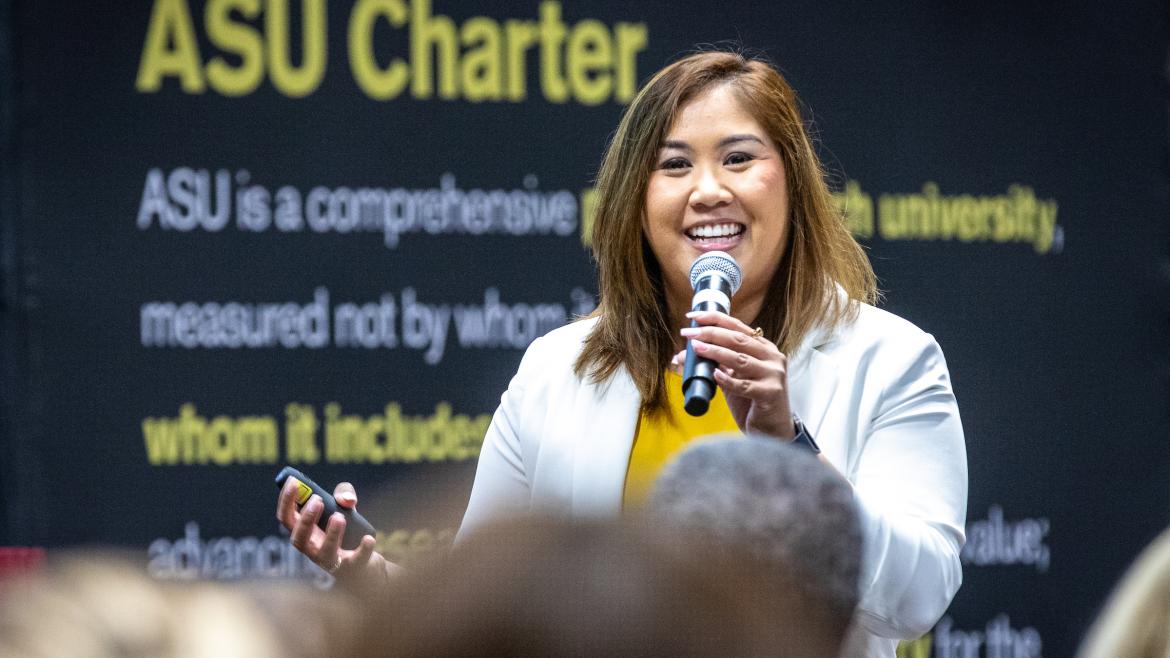 Celebrate their identity — and make sure to explain the jargon

Everyone who works at Arizona State University is critical to the success of students — especially students who are the first in their family to go to college. On Tuesday, hundreds of staff and faculty attended the first-ever ASU First-Gen Zone workshop on how to support this growing group of students.

ASU has about 25,000 first-generation undergraduate students. Of the total undergraduate and graduate population, about 35% are first generation college-goers — more than three times the proportion since 2002, according to Kevin Correa, director of the First Year Success Center at ASU.

“We want first-generation students to know they’re not alone at the university,” he said.

Staff and faculty are so eager for this information that the 100 seats allotted for the workshop filled up within half an hour of registration opening, Correa said. So the event was enlarged and moved to the Memorial Union, drawing more than 250 staff and faculty members from all four Valley campuses plus the SkySong and Lake Havasu locations.

The First Year Success Center’s Game Changers program is devoted to first-generation students, with one-on-one peer coaching and other services. But Marisel Herrera, founding director of the center and now the director of training and development, said that all staff at ASU are instrumental in guiding this population. 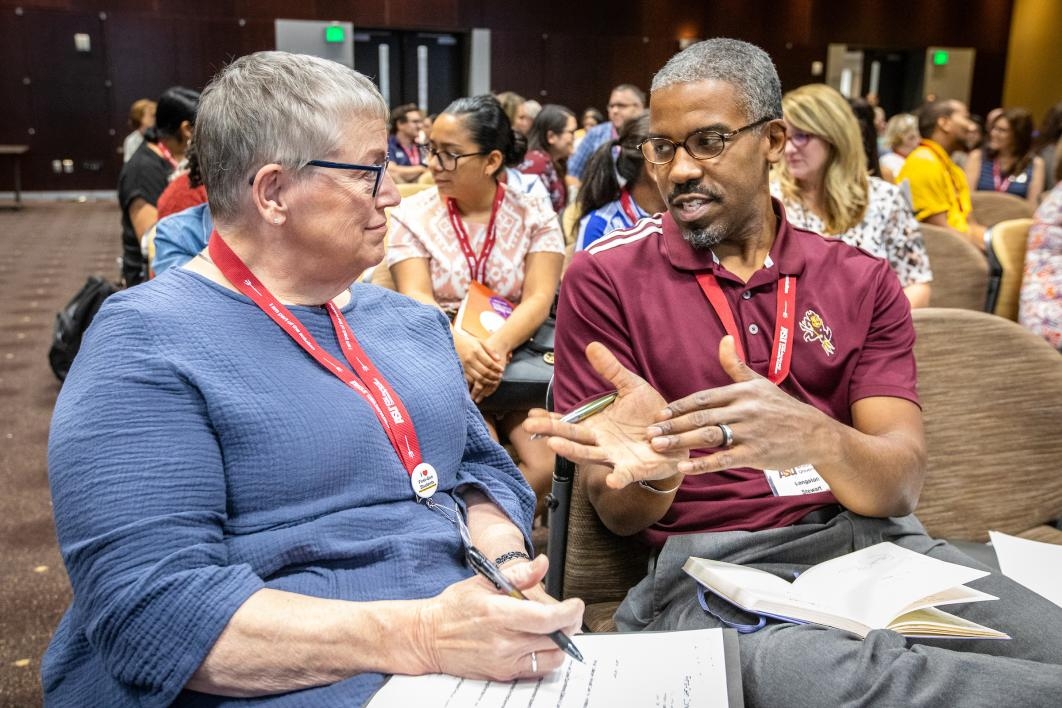 Caryn Unterscheutz, internship coordinator for the Edson College of Nursing and Health Innovation, and Quincy Stewart, research specialist for the Wrigley Sustainability Institute, discuss working with first-generation students at the first-ever ASU First-Gen Zone workshop Tuesday at the Memorial Union on the Tempe campus. 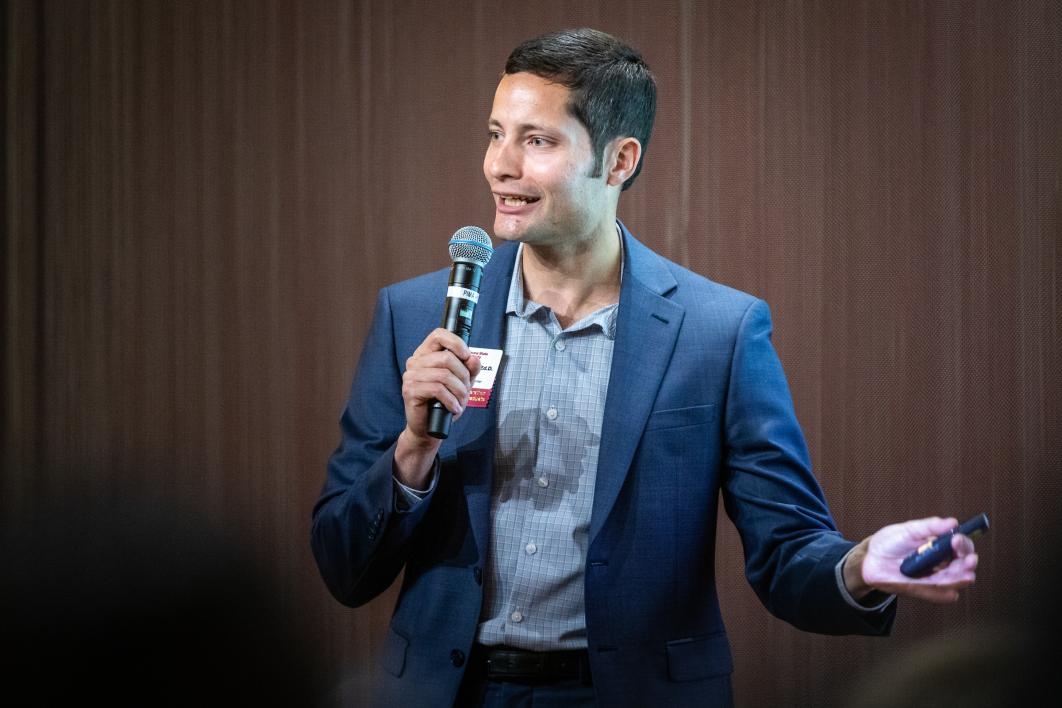 Kevin Correa, director of the First Year Success Center at ASU, discussed practical advice for staff and faculty in supporting first-generation students at the inaugural ASU First-Gen Zone workshop at the Memorial Union on Tuesday. 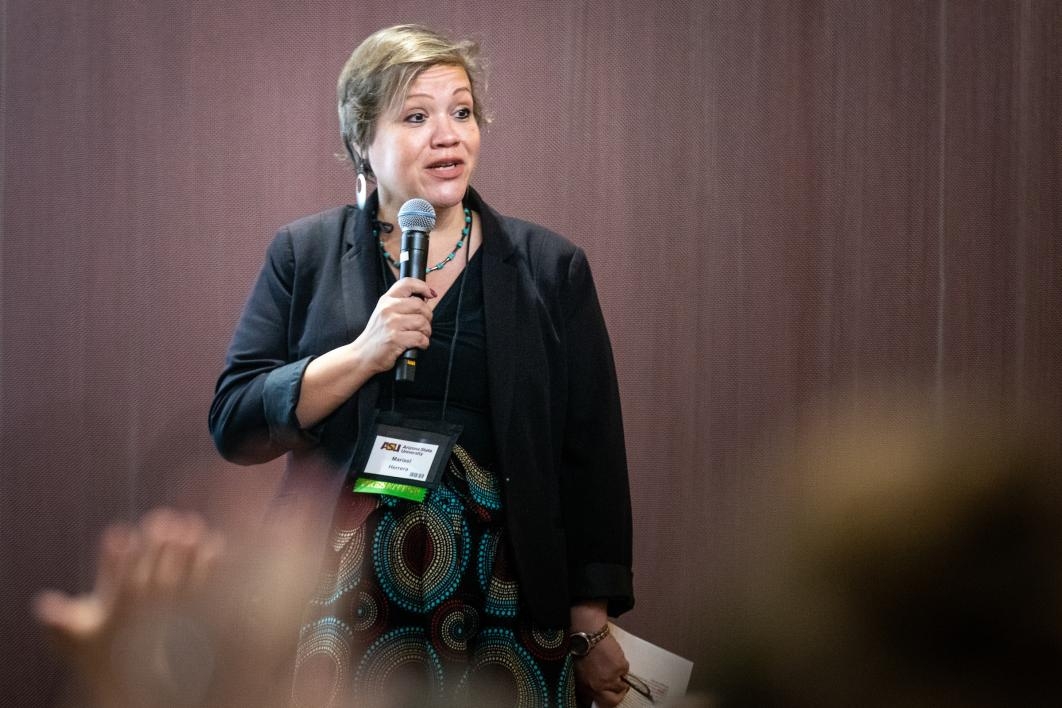 Marisel Herrera, director of training and development for the First Year Success Center, told staff and faculty at the ASU First-Gen Zone workshop that interacting with student workers is a good way to encourage their success.

“All of us are educators and influence students because they see us as the experts,” she said. “There’s an invisible army at ASU we don’t talk about, like the cashiers and the custodians. Those people matter in making connections.”

ASU was recently designated a First Forward institution by the Center for First-generation Student Success.

To truly support first-generation students, universities must take the responsibility for their success — not foist it onto the students, according to Lindsay Romasanta, who gave the keynote address at the workshop. Romasanta, who earned a bachelor’s and doctorate degree at ASU, is director of student success programs at the University of California, San Diego.

That requires a change in mindset, she said, because first-generation students are more likely to be working, to be female and to be people of color.

“But when we blame the lack of engagement on the student without being conscious of their lived experience, we’re missing the boat. They might be commuting or taking care of a family member.”

Romasanta said that a lot of previous research approached first-generation students as being “at risk” or lacking certain skills.

“It’s time to flip the script,” she said, noting the strengths she saw when she worked in the TRIO program at ASU’s Downtown Phoenix campus.

“I was always amazed by those students. ‘How many jobs are you working? How many people are you feeding?’”

It’s important to remember intersectionality, Romasanta said — or the many identities that make up every person.

“First generation is just one identity that a student might have, but their most salient identity might be their immigration status or their gender identity or their commuter status,” she said.

At the institutional level, universities need to create systems of data and research on first-generation students, as well as provide a system of support including one-on-one peer coaching, she said. And consider setting up support for new graduates.

“First-generation students who are being surveyed are saying it’s taking them longer to get a job,” she said. “We can’t just push them out the door with a degree.”

The workshop included several break-out sessions. Correa and Herrera shared tips in a session titled, “Brilliant and Resilient: The Impact of Coaching on First-Generation Students.”

Herrera said that many staff members’ most frequent contact is with student workers, which is crucial.

“Those jobs are critical to their success at ASU,” she said.

“What they’re doing day to day may not seem to matter to their future, but it’s important for you to show them how it will matter.”

Some of the advice from that session includes:

• Normalize first-generation identity by talking about it. Staff and faculty who were the first in their families to go to college can share their stories. Celebrate First Generation College Student Day on Nov. 8.

• Embrace the perspective that first-generation students bring their own strengths.

• Connect students to resources, opportunities and information they need. Explain procedures and jargon to them.

• Be a cheerleader by encouraging them. “Help them know they do belong at the university and that they’ll be cared for and supported,” Herrera said.

• Be willing to have difficult conversations. “Sometimes you don’t know how to navigate an environment, and that might show up in your attire. That’s an awkward conversation,” Herrera said. “Most people respond to feedback when they know you care about them. Say, ‘I know you have goals in mind. Do you think the attire is conveying the message you want others to have?’ It’s our responsibility to have those conversations.”

• Be authentically curious and nonjudgmental. “For me, the phrase is, ‘Tell me more about your experience,’” Correa said. “A coach helps a student find their best path by being nonjudgmental.”

Herrera said the future of higher education is with first-generation students.

"That's not hyperbole — that’s a demographic reality," she said.

Top photo: Lindsay Romasanta, an ASU alumna who is now the director of student success programs at the University of California, San Diego, was a first-generation student at ASU. Photo by Charlie Leight/ASU Now

The first week in Washington, D.C., for Arizona State University students participating in the Capital Scholars program feels like a whirlwind.While dressed in business attire, students walk countless steps in the hot and humid summer weather touring various political offices, government buildings and historic sites. Students also get a chance to receive advice and network with government staff, A...

The first week in Washington, D.C., for Arizona State University students participating in the Capital Scholars program feels like a whirlwind.

While dressed in business attire, students walk countless steps in the hot and humid summer weather touring various political offices, government buildings and historic sites. Students also get a chance to receive advice and network with government staff, ASU alumni and other professionals. 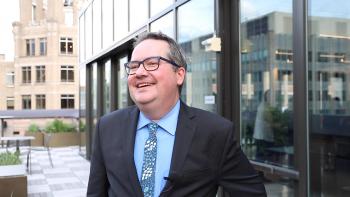 Matt Caruso is one of those ASU alumni who help Capital Scholars navigate our nation’s capital.

“It’s so worth it to me because the students want to learn,” Caruso said. “They want more out of D.C. and out of the program.”

In his mid-20s, Caruso moved from Connecticut to Arizona hoping to become the first member of his family to earn a degree. Upon finishing his associate degree at Paradise Valley Community College, Caruso chose to attend ASU next due to the quality of the professors in his major at the time — history. After taking summer and winter classes, Caruso turned his interests to political science, adding it as another major.

Once he graduated from ASU in 2006 with degrees in both political science and history, Caruso left for Washington, D.C., to intern with Common Cause while participating in the Capital Scholars program.

According to Caruso, the experience would ultimately change his life.

“The program and internship prepared me to learn that in D.C. versatility is an extremely valuable commodity that I have used in my professional career,” Caruso said.

The camaraderie between students was just as key to Caruso as the professional skills he gained. He has maintained friendships with his fellow Capital Scholars, as well as the faculty program director, Richard Herrera.

In 2014, Herrera asked Caruso and a few other past participants if they would come out and meet with the students at the annual welcome dinner for the program. Over time, Caruso’s role would evolve to become a resource for students interested in life in Washington, D.C.

Working in the nation’s capital as the manager of committees and educational programs with Intermodal Association of North America, Caruso has intimate knowledge of the city. He often takes students out to group dinners and various excursions. For this year’s group of Capital Scholars, Caruso took students to the Folger Theater and Library to see Shakespeare’s "Love’s Labor’s Lost" where an actor spoke with the students about the performance afterwards.

Beyond volunteering his time to help students integrate with Washington, D.C., Caruso shared that mentoring students gives him the opportunity to learn from the current generation of Sun Devils.

“The students will meet so many D.C. superstars,” Caruso said. “I like to be the person that scales it back as someone they can look up to but also someone that treats them as a peer.”

Each year, roughly 16 students participate in the Capital Scholars program with the School of Politics and Global Studies. Many of the internships that students get are unpaid, and the costs of the program prevent some of the most promising students from participating unless they receive financial assistance. Thanks to the help of donors, the school is able to offer scholarship opportunities specifically for deserving students participating in the program.

“If I had not received a scholarship, I do not think I could have participated in the program,” Caruso said. “An investment in the Capital Scholars program is an investment in the future of ASU students that are going to accomplish great things they had no idea they could.”