The symposium provides a chance for undergraduate researchers to present what they've learned through their research experiences. The event is open to faculty, staff, students and the general public. 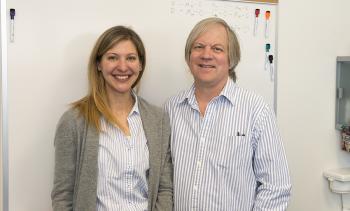 In a talk titled "Trek of a Biophysicist," Thielges shared her story of progress from an undergraduate at ASU to an associate professor in the department of chemistry at the University of Indiana Bloomington. She described her personal development in science while sharing a broader perspective gained along the way.

“My career as an academic professor should be considered a lifestyle. I feel very fortunate to do what I love,” Thielges said. “The freedom to pursue my interests is the key advantage of my specific position.” 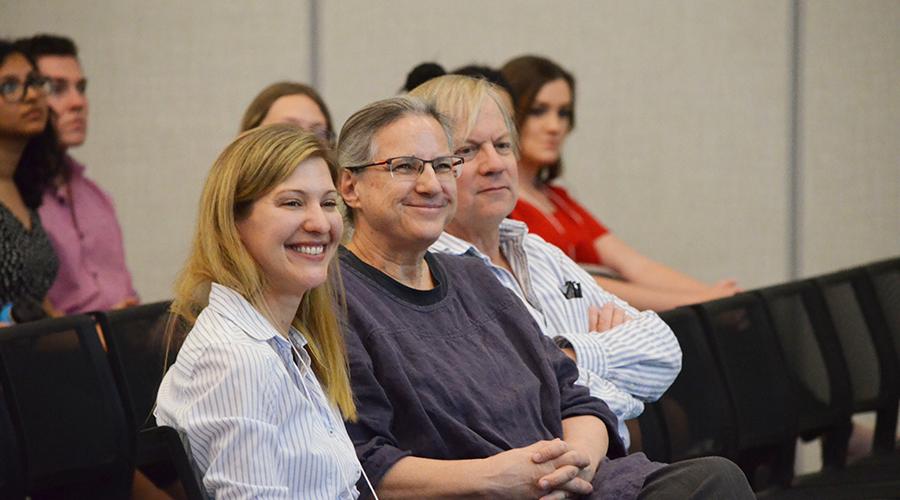 Thielges answered a few questions about her experience at ASU, her work today and the advice she has for those who are interested in studying in the STEM field.

Question: How did your undergraduate experience in the School of Molecular Sciences at ASU prepare you for your current career path?

Answer: My experience in a research group as an undergraduate was most valuable to my career trajectory. The experience convinced me to pursue a career in academic research and bolstered my application for top graduate programs, setting up my path to becoming a professor myself.

Q: What is it like applying your degree in a new area?

A: The interdisciplinary nature of our research is very challenging. Gaining depth of understanding in multiple scientific areas requires versatile thinking and simply more time. For this reason, I also find it difficult to train new students in our research group. However, I am excited by the science so the challenge is worthwhile.

Q: Can you describe your Sun Devil story? What brought you to ASU?

A: Honestly, having grown up in the cold of North Dakota, initially I considered ASU because of the warm weather and the offer of a generous scholarship package. I had just applied for fellowships, which made me aware of the importance of research experience. When I visited, ASU promoted their undergraduate research programs, and learning about all the opportunities cemented my decision to attend ASU.

Q: What are some of your favorite memories of ASU — academic, research or otherwise?

A:  My time in the laboratory was the highlight of my undergraduate years. I worked with a fantastic bunch of graduate students, and my mentors were very supportive. A research lab becomes one’s family.

Q: What is your advice for current students in the School of Molecular Sciences who are thinking of pursuing a career path similar to yours?

A:  While my work is satisfying, the career also is very competitive, so you have to be consistently dedicated, which can mean giving up other things in life, as well as getting used to handling setbacks and criticism. There are many excellent career paths in which you can do science. Also, as an undergraduate, I did not realize how so-called “soft” skills, like communicating effectively both verbally and in writing or interacting with and motivating people with diverse personalities, are just as critical to your success as your technical understanding of science.

Q: What would you tell a prospective ASU student that they need to know about studying in the School of Molecular Sciences at ASU?

A: Take advantage of all that is offered. Don’t be shy to engage your professors. Enjoy being a student. Your undergraduate years likely will be among the best times in your life.

Editor's note: This story is being highlighted in ASU Now's year in review. Read more top stories from 2019.Arizona State University will soon begin accepting students into its first degree program based entirely at its 1-year-old Washington, D.C., location.The executive master’s of arts in global affairs and management degree will be offered starting in January 2020 by the Thunderbird School ... 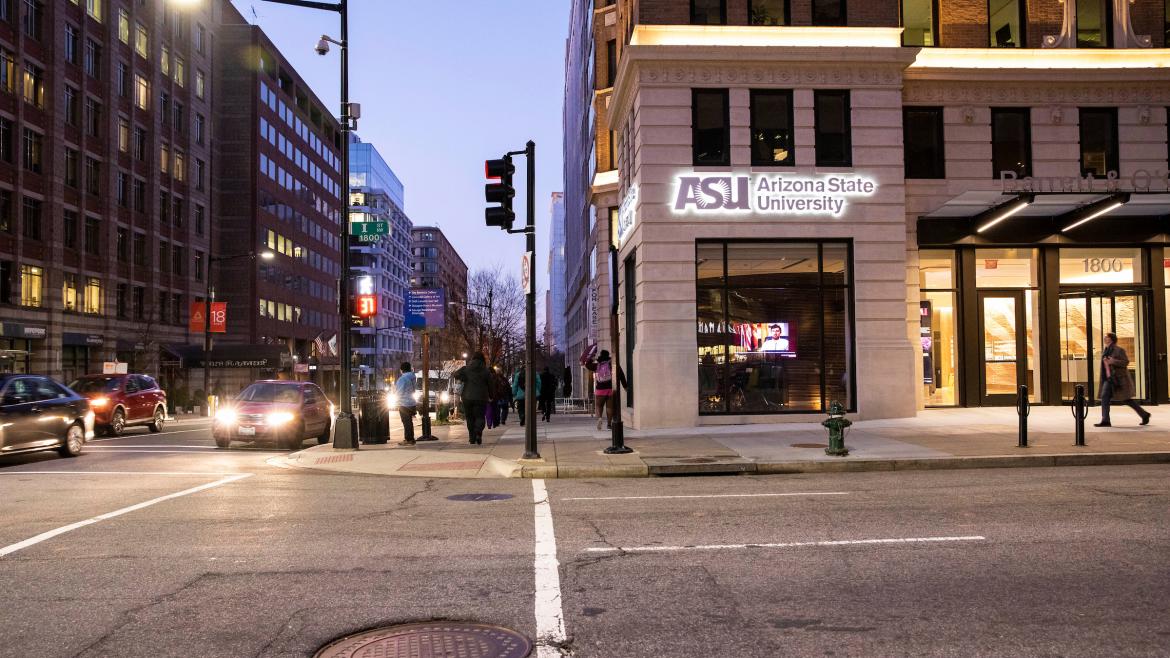 The executive master’s of arts in global affairs and management degree will be offered starting in January 2020 by the Thunderbird School of Global Management, and is intended for professionals in the Washington area.

The program is offered in partnership with the Sandra Day O’Connor College of Law and the Watts College of Public Service and Community Solutions.

“We’ve developed a transdisciplinary, solution-oriented degree focused on global innovation,” said Sanjeev Khagram, dean and director general of the Thunderbird School of Global Management. Thunderbird, which has been offering degrees in international business for more than 75 years, became part of ASU in 2014 and is based at the Downtown Phoenix campus.

The yearlong master’s degree program will be held at the Ambassador Barbara Barrett and Justice Sandra Day O’Connor Washington Center at Arizona State University, a few blocks from the White House. ASU already offers several academic programs at its Washington, D.C., location, including the International Rule of Law and Security Program for law students, the Cronkite News Washington Bureau for journalism students, and the Capital Scholars Program for students in the School of Politics and Global Studies. The site also is home to the McCain Institute for International Leadership.

But this will be the first time that residents in the Washington area can earn an ASU degree at the location. Khagram said that Thunderbird alumni encouraged the idea.

“We have regularly had dozens and dozens of folks from the D.C. area join us for our full-time, immersive, core management graduate degree,” he said. “We have more than 2,000 alums in the area and when we talk with them, we heard, ‘It would be great if there was a degree program in D.C. so people didn’t have to fly back and forth.’”

Khagram said the degree is intended for people who are looking beyond their own career.

“It’s a truly global degree for midcareer professionals in the public, private or nonprofit sector who want to understand other sectors, engage other sectors or move to another sector,” he said.

“A lot of folks in government want to move to the private sector, or vice versa. They want a global degree that’s critical for that next phase and they want to continue to work.”

The 30-credit degree will be completed in one calendar year, from January to December, with weeklong immersive courses the first and last week, and class meetings on Fridays and Saturdays every other week the rest of the year.

The partnership with Thunderbird on the new degree was a natural fit for the law school, which already has several experts in international law and the existing rule of law externship in Washington, D.C., according to Diana Bowman, a professor of law and associate dean for international engagement in the law school.

“We recognize that we’re not training lawyers to be trade experts. We’re arming these students with the knowledge that everything they do in business has a legal dimension to it and you can’t just guess,” said Bowman, who is also associate dean in the School for the Future of Innovation in Society at ASU.

“We’re giving students the tools to know when they need to talk to a legal professional.”

The three courses in the law pathway are international law, human rights law and international trade law, according to Adam Chodorow, the Jack E. Brown Professor of Law and associate dean of academic affairs at the law school.

“Those courses are fundamental to anybody who is engaged with a global mindset and who wants to interact on the global stage,” he said.

“Human rights are a critically important part of everything we should be doing and there are issues involved in hiring and building,” he said.

“Trade is at the heart of much of the interaction between countries and you have to understand the World Trade Organization and other organizations that set rules for global commerce."

Chodorow said the hope is that law school students who are in Washington, D.C., could take some of the courses that will be offered.

“It’s a wonderful opportunity that builds on ASU’s culture of working across disciplines and across schools,” he said.

Top image: The new executive master's in global affairs and management degree will be offered starting in January 2020 by the Thunderbird School of Global Management. The yearlong program will be held at the Ambassador Barbara Barrett and Justice Sandra Day O’Connor Washington Center at Arizona State University, a few blocks from the White House. Photo by Deanna Dent/ASU Now