The flu pandemic of 2009 was met by a flurry of panic. This strain of the H1N1 virus, or the “swine flu,” swept across the globe and is believed to be responsible for the deaths of approximately 284,500 people worldwide.

Like a shuffled deck of cards, the virus was the product of the reassortment of avian, swine and human influenza viruses. These ever-changing viral strains pose a formidable challenge to modern health care as they require the development of new vaccines. 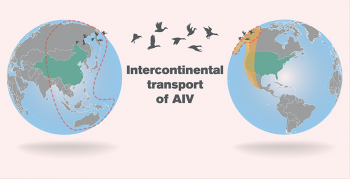 The researchers specifically looked at the impact of climate change on the migration of birds entering the U.S. via the Pacific Flyway from Beringia. Download Full Image

One virus of increasing concern to researchers is the avian influenza virus (AIV), as it spreads easily among bird populations and is potentially transmissible to humans. Because bird populations can travel from land mass to land mass with ease, there are higher chances of it reaching a wider range of birds or other species.

The 1918 influenza outbreak, the most severe pandemic in recent history, was caused by an H1N1 virus of avian origin. Its swath of destruction claimed at least 50 million lives worldwide.

There are a plethora of variables that govern the transmission of avian strains of influenza, particularly the migration patterns of the bird species. Climate change has a significant bearing on these patterns ­— a shift in the global climate could lead to a shift in migratory patterns, leading to the reassortment of these viral strains and increasing the chances of a new, threatening strain emerging. Higher temperatures are also typically more conducive to viral transmission and pathogenicity.

In a review article published for Environment International, Matthew Scotch, faculty member in Arizona State University's Biodesign Center for Environmental Health Engineering and associate professor in the College of Health Solutions, and collaborators at the University of Washington addressed AIV ecology and evolution in the context of climate.

“I have been working with Dr. Peter Rabinowitz at the University of Washington for many years,” Scotch said. “He, like me, has an interest in zoonoses. All of this is impacted by climate change. This includes avian influenza and the introduction of other highly pathogenic viruses that can evolve to cause human-to-human outbreaks.”

Zoonoses are infectious diseases resulting from parasites, bacteria or viruses that can be transmitted among animals or to humans. Upon transmission to humans, outbreaks can occur at a rapid rate. In fact, most human diseases originated in animals — upon mutation, reassortment or the introduction of an intermediate species, humans became their optimal hosts.

In this paper, the researchers first looked at the impact of climate change on the migration of birds traveling via the Pacific Flyway to and from Beringia and then evaluated the resulting changes to AIV ecology. 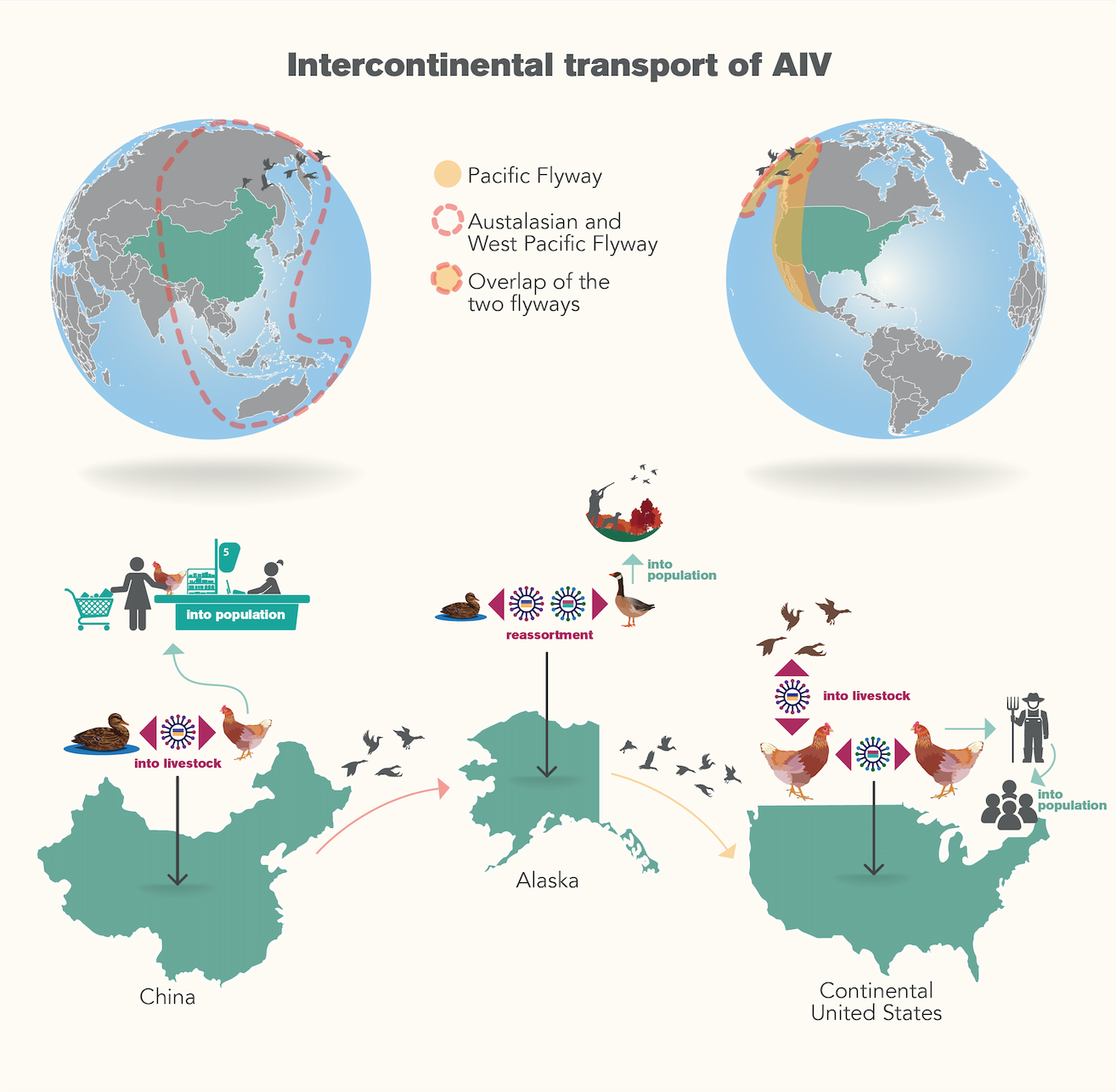 “There is intercontinental transport of AIV in migratory birds from Asia to Beringia,” Scotch said. “Climate change impacts many things in Beringia and elsewhere including avian migration patterns, overlap of species and viral shedding and reassortment. Then there is intra-continental transport in North America via the Pacific Flyway. You then have local transmission between migratory birds and domestic poultry.”

The paper goes on to discuss all the variables involved in AIV transmission that could be influenced by changes in the climate. For example, AIV persistence will be altered by the changing temperatures of the water the virus inhabits in Arctic areas.

Similarly, the timing of migration to and from the Arctic could lead to increased contact with humans or other bird species, increasing the likelihood of transmission.

However, the paper highlights gaps in knowledge regarding AIV ecology, suggesting that not enough studies have been conducted evaluating changing viral ecology as dictated by changing climatic conditions. To mediate this, the researchers call for the employment of a “One Health” approach, which connects the health of humans, animals and the environment.

“We share this planet with animals — the health of all species is vital. Veterinary and human medicine need to communicate with each other,” Scotch said. “This is especially true for zoonotic diseases like avian influenza. The majority of infectious diseases are zoonotic in origin.”

Although there are other initiatives centered on this theme of the evolution of infectious diseases, the researchers hope to continue promoting climate change’s role in this evolution.

“We are always looking at funding opportunities from federal agencies including NSF and NIH,” Scotch said.

From classical to electronic, a new professor at Arizona State University School of Music said he composes music for all, which is one reason why he is excited to join the school in the Herberger Institute for Design and the Arts.“I was drawn to the eclecticism and openness of the composition program at ASU, Nicaraguan-American composer Gabriel José Bolaños said. “I was particularly impre...

From classical to electronic, a new professor at Arizona State University School of Music said he composes music for all, which is one reason why he is excited to join the school in the Herberger Institute for Design and the Arts.

“I was drawn to the eclecticism and openness of the composition program at ASU, Nicaraguan-American composer Gabriel José Bolaños said. “I was particularly impressed with the diversity and breadth of the faculty's creative work with no single dominant aesthetic or style. This kind of creative freedom is very appealing to me.” 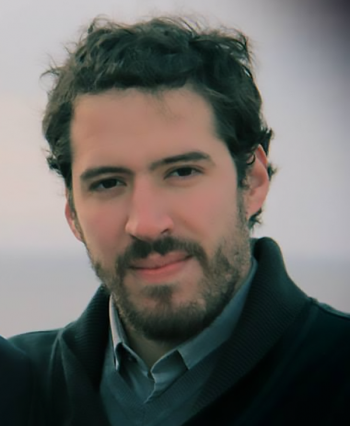 A composer of solo, chamber, orchestral and electronic music, Bolaños said he likes to write music that explores unusual timbres and structures. He is also interested in computer-assisted-composition, auditory perception and linguistics, and he said his recent music engages with theories of ecological listening — how our sense of hearing evolved primarily to interpret our environment.

“We are delighted to welcome Dr. Gabriel Bolaños to our faculty,” said Heather Landes, director of the ASU School of Music. “As one of the few recognized Nicaraguan-American composers of chamber and orchestral music since the 19th century and one of the few multimedia and electroacoustic sound artists from the region, Bolaños brings a unique voice and eclectic compositional style that addresses contemporary political and social issues to our program.”

“Helping students hone their craft, broaden their ideas and become more aware of their creative process was very rewarding,” Bolaños said. “It also had a tremendously positive impact on my own creative work — teaching composition helps me grow as a composer.”

Bolaños describes his musical background as eclectic from studying classical guitar, Latin American folk music, playing in rock bands, performing as a flamenco dance accompanist and with free improvisation collectives. He has composed music for film, dance and theater and has collaborated on multimedia and installation work.

He received a PhD in composition from University of California, Davis and a Bachelor of Arts from Columbia University. He is co-founder and artistic director of Proyecto Eco, Nicaragua’s first new-music ensemble, and has also helped organize artistic and cultural exchanges between U.S. and Nicaraguan musicians.

Bolaños said he is very excited about having access to such a large community of talented performers and about the prospect of collaborating with new performers and ensembles at ASU.

“I hope that these eclectic experiences, along with my formal training in western concert music and electroacoustic music, will help contribute toward the diverse and pluralistic composition program at ASU,” Bolaños said.