Smiles on every face. Congratulations passed around left and right. Speakers saying they don’t want to speak for too long. Just another scene of another graduation in May.

Not quite. These students aren’t graduating from a school or a university. 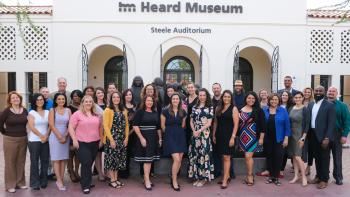 On Friday, May 10, at the Heard Museum, 32 participants graduated from the American Express Leadership Academy at the ASU Lodestar Center. They are the program’s 11th class of emerging nonprofit leaders in the Phoenix metro area.

The participants spent almost 10 months together, meeting for monthly program days on leading and managing nonprofit organizations, working closely on their respective group projects outside of class, learning about themselves with the help of their classmates and executive coaches and bonding so closely that they say they’re nearly a family.

“This is a program for emerging leaders to be able to develop themselves as leaders, and I was looking for something like that,” said Claire Louge, one of the graduates of Class 11 and the training director for Prevent Child Abuse Arizona. “Not just about the logistics of managing a team or an organization, but the interpersonal and intrapersonal skills I wanted to develop.”

Jennifer Jenkin, another Class 11 graduate and the education manager for McDowell Sonoran Conservancy, said the academy helped her to realize many things about herself, such as her core values, how those are being implemented in her professional growth and her own leadership potential.

“Attending the academy made me realize how resilient I already was as a leader,” Jenkin said. “And that I wasn't necessarily leveraging my leadership skills to their full potential. (The academy has) helped me reflect a lot on who I am and what I bring to the table at an organization. It has helped me be able to recognize strengths and weaknesses in others in order to build highly effective teams.”

Launched in 2008 and originally called the Generation Next Nonprofit Leadership Academy, the Lodestar Center’s American Express Leadership Academy was expanded and renamed in 2014 thanks to additional funding from the American Express Foundation. The new grant allowed the academy to grow its class size to about 30 leaders, while adding programmatic offerings like 360-degree evaluations and one-on-one executive coaching. It’s a unique melding of professional and personal development in preparation for high-level leadership roles.

“This year’s class of academy graduates is exemplary as they have built their individual leadership skills while simultaneously unleashing the power of the network they have built throughout the year with their peers and with alumni from our prior classes,” said Robert Ashcraft, executive director of the ASU Lodestar Center and Saguaro Professor of Civic Enterprise in the Watts College of Public Service and Community Solutions and its School of Community Resources and Development. "We are grateful for our more than decade-long partnership with the American Express Foundation, whose leaders realize the value of nurturing nonprofit leadership as a powerful community development strategy and who values the relationship to our center given our ability to deliver on mutually beneficial goals.”

Sadhna Bokhiria, chief operating officer of Kapoor Foundations, was chosen by her classmates as the graduation speaker for Class 11. She said she learned what leadership is from the academy.

More than a class

Louge said that, when she applied, she was also hoping to make connections with other emerging leaders through the academy, which is a key part of the collaborative cohort model it uses.

But those networking connections were just the start, she said.

“There's a lot of love in our class,” Louge said. “We support each other, we will learn things and reflect together, we go to each other's events, whether they’re work events or personal events. The connections I've made are both professional and personal. We developed a sense of a work family within this team. I'm going to miss it so much.”

Bokhiria said that this program was the first time she didn’t feel like an outsider in all her years of education, from grade school through her doctorate.

“This is the first educational experience I've had, where it's like, every single person in the room wants you to do well, and they cheer for you and they support you,” Bokhiria said.

Kenneth Mims, the superintendent for Science Prep Academy, said the academy and this class will always mean a lot to him.

“It's a network of friends who are leaders doing good work. This is a cohort that I feel that I will stay in contact with for the rest of my life,” Mims said. “Also I feel that it will (lead to) opportunities to partner with other organizations and to help more people in the community and do great things for a lifetime.”

Jenkin said that her favorite part of the academy was the people she spent so much time with.

“The people in this program have been amazing and wonderful,” Jenkin said, adding that many of them spend their free time together and even started a book club. “We've really become almost — I know it's cliche to say a family, I don't want to say family — but we've become really close. A lot of us have made friendships that are going to last well beyond the program.”

Many impacts from one class

For Jenkin, the academy’s impact didn’t stop at her or her classmates. After each monthly program day, she immediately started sharing what she had learned with her colleagues at work.

Mims said the curriculum they learned was very helpful and practical for his organization, too.

“A lot of the curriculum, lot of the lessons, a lot of the strategies that we were learning in the class, I can apply immediately within the next week," he said. "I felt more confident because I had ... tools or strategies that I could use to deal with situations. It was just very empowering.” 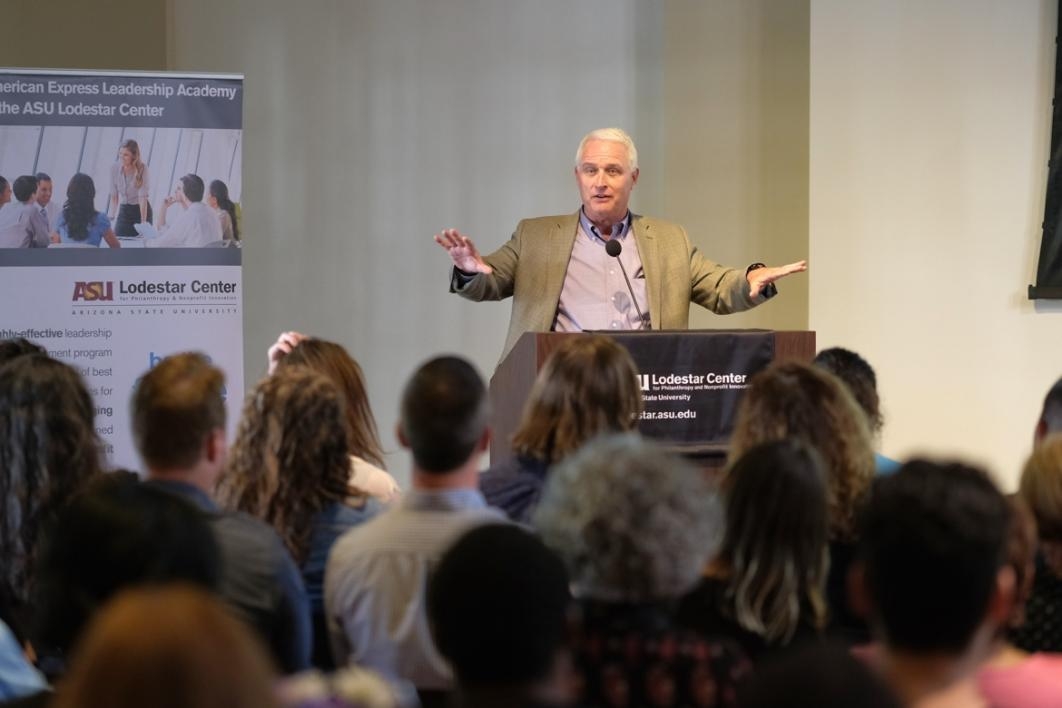 Robert Ashcraft is the executive director of the ASU Lodestar Center and Saguaro Professor of Civic Enterprise in the ASU Watts College of Public Service and Community Solutions and its School of Community Resources and Development. 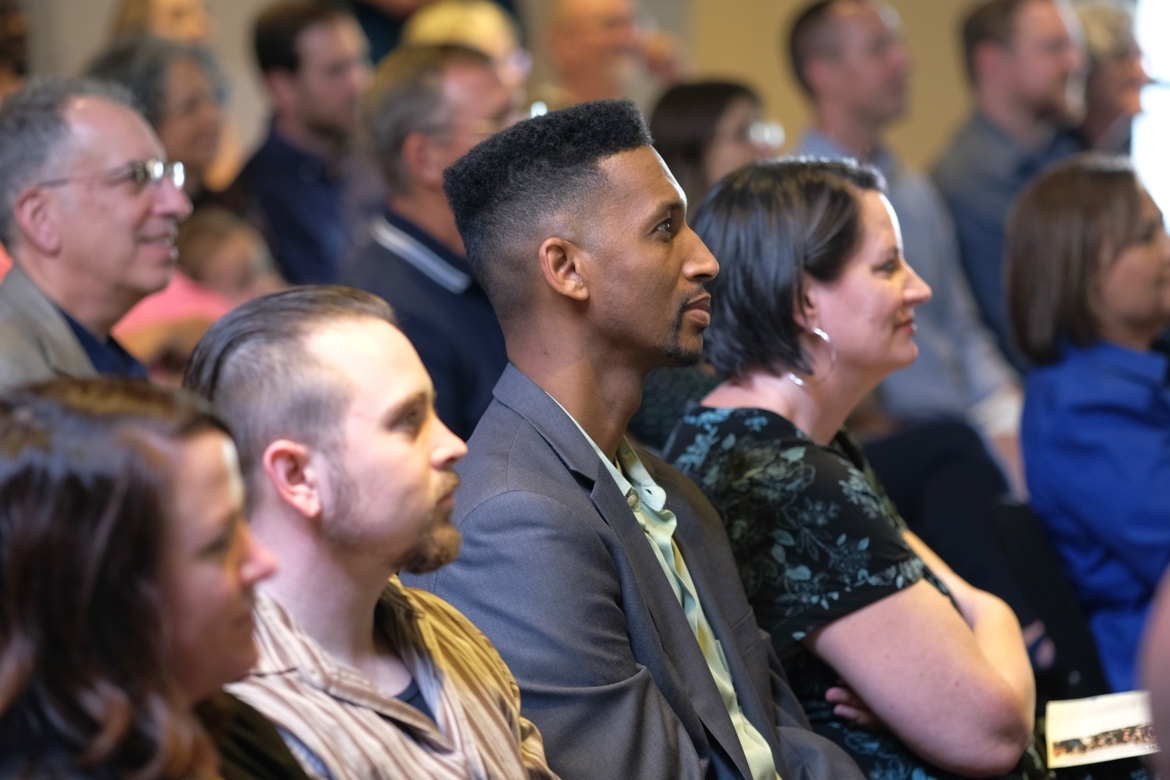 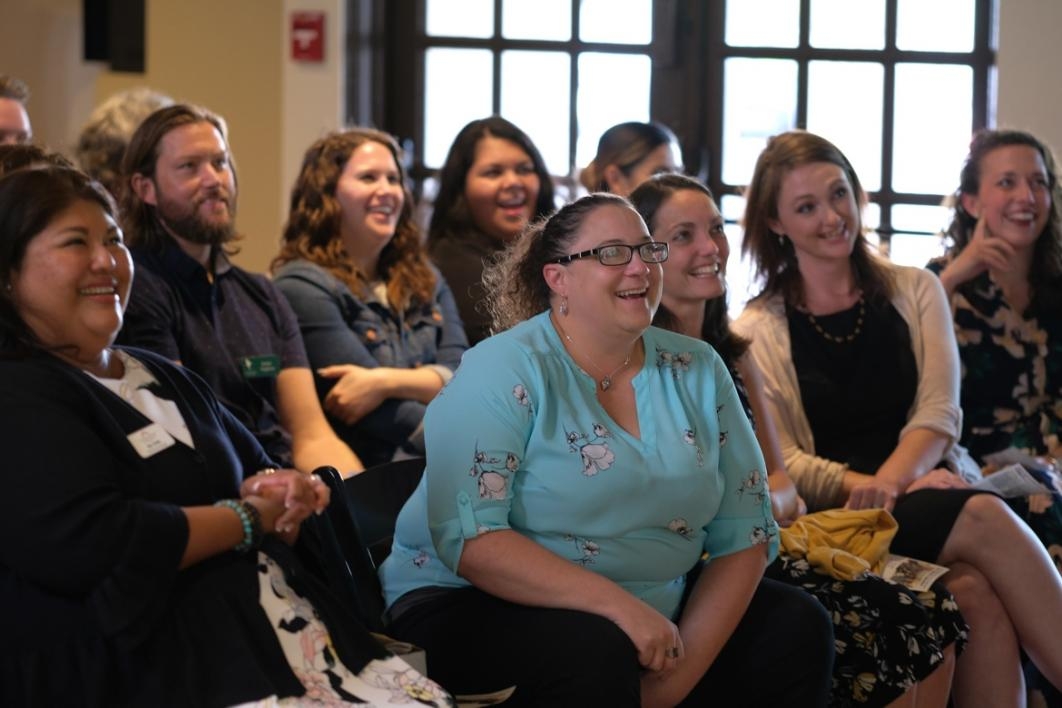 Jessica Wright (center) and her classmates laugh while watching a graduation video they produced. 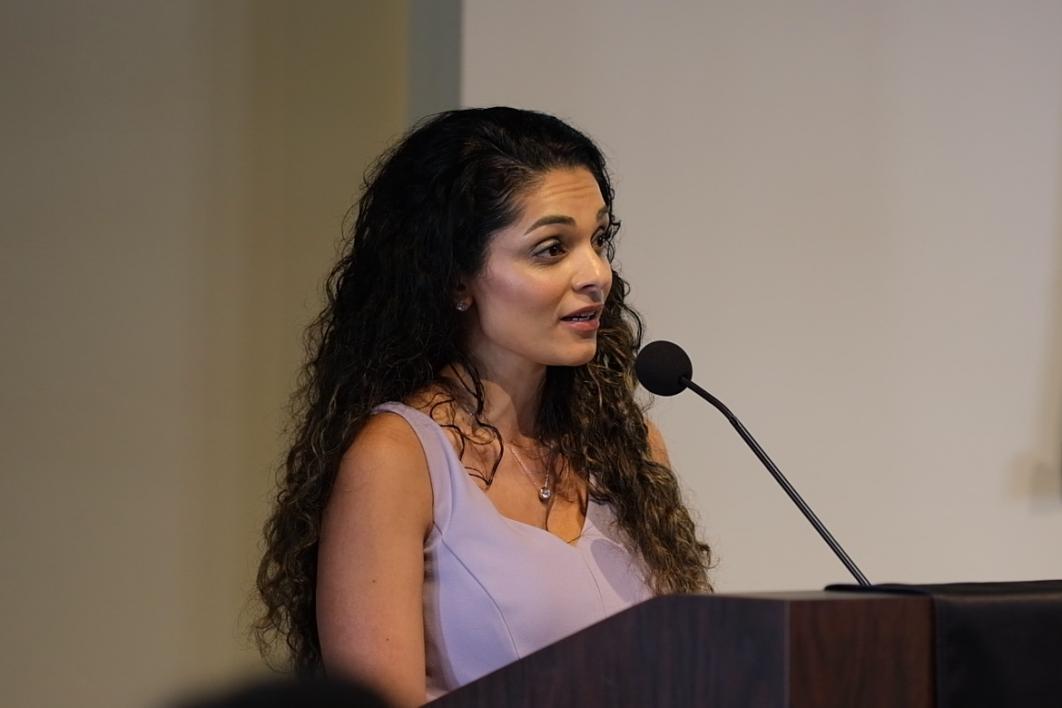 Class 11's Sadhna Bokhiria was chosen by her classmates to give the graduation speech. 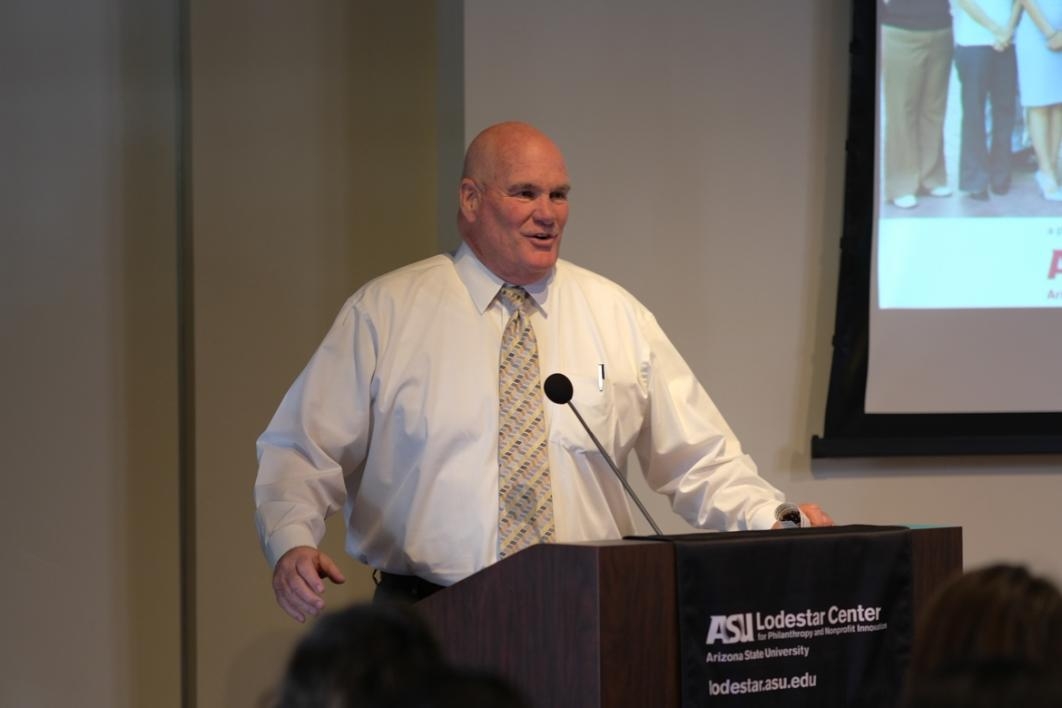 Michael Hughes, the president and CEO of A New Leaf, Inc. and a member of the ASU Lodestar Center's Community Leadership Council, spoke to the graduates. 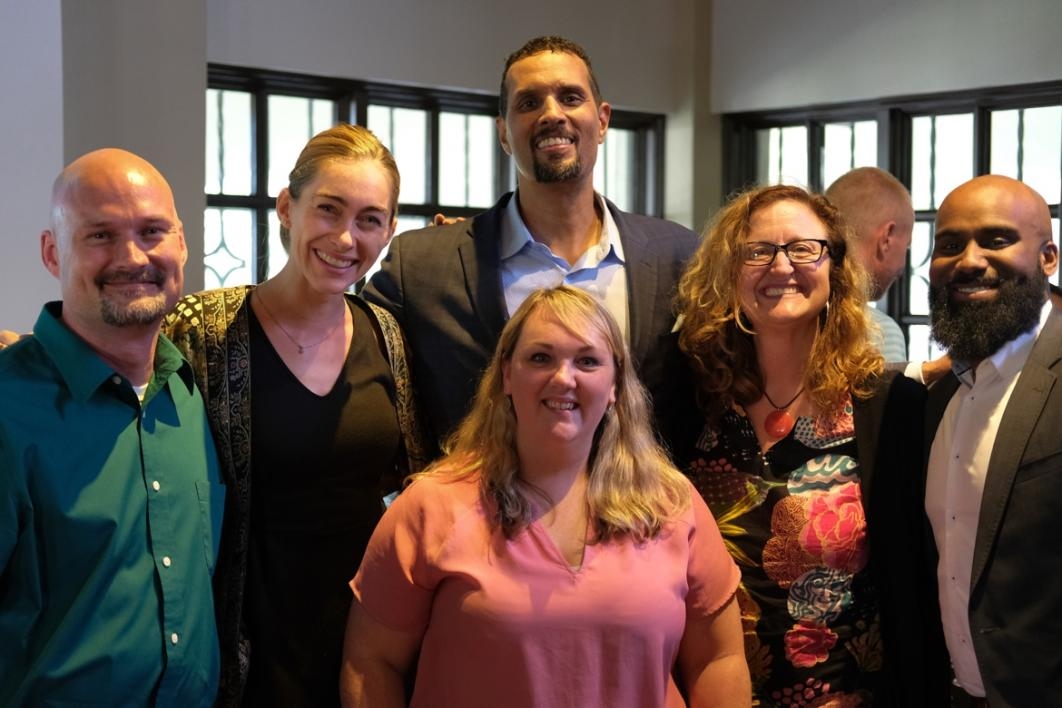 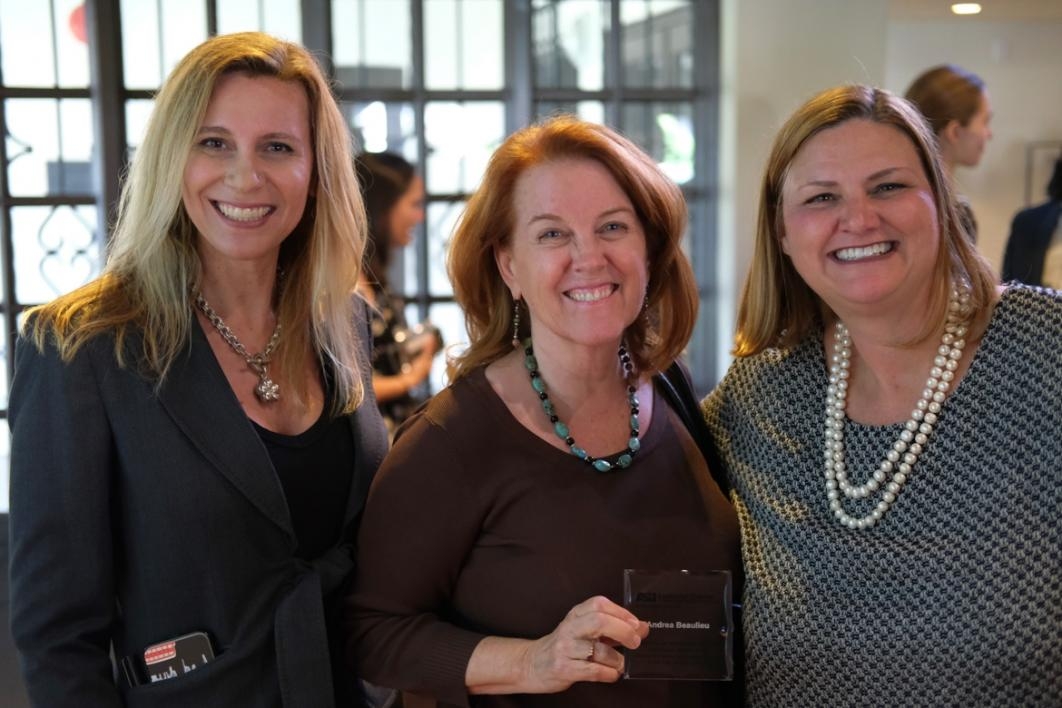 Jill Watts (left) and Cassidy Campana (right) with Andrea Beaulieu (center). Watts is director of Capacity Building Initiatives at the ASU Lodestar Center, Campana assists in managing the academy and Beaulieu serves as an executive coach.

Program days are led by a variety of speakers and practitioners, from established nonprofit leaders to professors to community leaders, with plenty of interaction as the group hones leadership skills and delves into critical issues facing the nonprofit sector.

And that, she said, ultimately has a significant impact on the nonprofit sector in Arizona.

“Now you've got this cohort of capable, skilled, qualified, competent leaders who can take these organizations into the next step — to become more professional, to continue to move that needle and to continue to have a bigger impact on the clients that they serve,” Jenkin said.

Louge said she doesn’t know what the impact of Class 11 will be yet, but she feels they’ve already found the key to success as they continue their work in the sector.

“This program forges real and meaningful relationships between people of different nonprofits, so that in the future, we can call upon each other if we need something,” Louge said. “Relationships are everything.”

The School of Criminology and Criminal Justice at Arizona State University has announced its 2019 alumni awards, which this year included three categories.Alumni Scholar AwardPresented to Associate Professor Scott Wolfe, Michigan StateFor outstanding scholarly contributions to the discipline of criminology and criminal justice by a person who has received the MA, MS, or PhD from the School of Cr...

The School of Criminology and Criminal Justice at Arizona State University has announced its 2019 alumni awards, which this year included three categories. 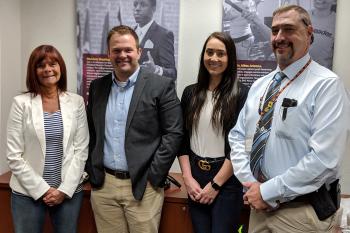 For outstanding scholarly contributions to the discipline of criminology and criminal justice by a person who has received the MA, MS, or PhD from the School of Criminology and Criminal Justice at ASU.

Scott Wolfe, associate professor at Michigan State University, is a 2012 PhD graduate who is heavily engaged in research with state and federal agencies associated with police reform. Honing his research chops at ASU, Wolfe has been cited over 2,000 times with six of his articles cited 100 or more times. Scott moved quickly to produce useful research evidence around the “Ferguson Effect.” This work figured prominently in public policy debates relating to policing and crime. As noted by his nominator Ed Maguire, “To help inform policy is the mark of a genuine public scholar. Wolfe is a public scholar who is engaged with the community at multiple levels. I see in him a bright, industrious and very promising young scholar.”

For demonstrating notable early-career accomplishments that indicate future success for contributions to the fields of criminology and criminal justice through research, practice or policy.

Allyson Roy is steeped in Sun Devil pride, having received both her undergraduate ('12) and graduate degree (MS '14) from ASU. Immediately hired as a crime analyst with the Tempe Police Department, Roy used her knowledge of ASU and Tempe to make connections that helped lead to the school receiving grant funding from the Laura and John Arnold Foundation for work on the Tempe Police Department’s body-worn camera program. Fast forward to 2016, and Roy became a sworn officer of the Tempe PD. Her nominator, Mike White, said, “Allyson epitomizes what it means to be a 21st-century cop: educated, mature, empathetic, data savvy, a strong communicator and an excellent problem solver”. You can look for Roy on the television show "Live PD presents: Women on Patrol."

For having made significant contributions to the advancement of criminology and criminal justice through distinguished leadership achievements as a practitioner in one of the justice professions.

This award is in memory of beloved School of Criminology and Criminal Justice professor Marie Griffin. This year’s recipient, Detective Randall Snyder (MA '14) of the Pinal County Sheriff’s Office criminal investigations bureau, internet crimes against children unit, was recognized for his significant contributions to the advancement of criminology and criminal justice through distinguished leadership achievements. Among other awards, Snyder has received a special commendation from the U.S. attorney general’s office. He has been directly responsible for the capture of domestic and international child exploitation offenders, rescuing many children from the hands of abusers. As noted by one of his former supervisors, “but for Snyder’s efforts these children would still be in the hands of their abusers.”

School Director Cassia Spohn noted, “As our program continues to mature, selecting from our pool of alumni nominations for these awards has become increasingly difficult. This is further testament to the fact that the School of Criminology and Criminal Justice continues to develop and train the most highly qualified graduates in the industry.”

Written by Nancy Johnson, School of Criminology and Criminal Justice