Wastewater treatment and reuse are critical to global health and sustaining a world population predicted to reach 10 billion by 2050. 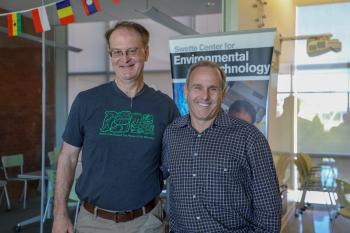 Bruce Rittmann (left) is director of the Swette Center for Environmental Biotechnology at the Biodesign Institute and is also a Regents' Professor in the School of Sustainable Engineering and the Built Environment at ASU. He is pictured at a reception honoring him as recipient of the 2018 Stockholm Water Prize. Also pictured is Joshua LaBaer, director of the Biodesign Virginia G. Piper Center for Personalized Diagnostics and the Biodesign Institute at ASU. Download Full Image

This study is novel in several ways:

Each day wastewater is treated by an activated sludge process in municipal wastewater treatment plants and returned to the environment for use. This treatment process has been used for over a century and today represents the largest application of biotechnology in the world, yet there has been no effort to map the global activated sludge microbiome. Developing a fundamental understanding of the biodiversity of the activated sludge microbiome in relationship to performance is critical to advancing and optimizing this key technology for maintaining environmental health.

“This unprecedented global sampling effort yielded new insight into the microbiology of activated sludge,” said Bruce Rittmann, director of the Biodesign Swette Center for Environmental Biotechnology at ASU. “Despite giant geographic differences, the microbial communities of activated sludge have a core of about 28 bacterial strains, which reflects the powerful and unique ecological selection of the activated sludge process.”

“This expansive study is the first time that a systematic study of the hugely beneficial microbial communities involved in the biological treatment of daily wastewaters from communities around the world have been studied to understand their fundamental structure and function has been undertaken," said Lisa Alvarez-Cohen, the Fred and Claire Sauer Professor at University of California, Berkeley and adjunct senior scientist at Lawrence Berkeley National Laboratory. "It represents an important development in understanding and maintaining these crucial microbial communities,”

A paper on this study, “Global Diversity and Biogeography of Bacterial Communities in Wastewater Treatment Plants,” has been published in Nature Microbiology. For more information about this study, contact jzhou@ou.edu.

World-renowned pianist Cathal Breslin will join the Arizona State University School of Music in the Herberger Institute for Design and the Arts as assistant professor of piano in August 2019.

“I am excited about the collaborative atmosphere of the Herberger Institute for Design and the Arts, and I am extremely fascinated by the role that the School of Music takes within an atmosphere that is connecting, fusing and merging different fields together,” Breslin said. “The School of Music has one of the most prestigious piano studies program in the nation, and I am delighted to be a part of its future.”

Praised worldwide by numerous critics as one of the most exciting pianists of his generation, Breslin’s music has received critical acclaim. The Cleveland Plain Dealer described his playing as having “superb intensity and passion.” The Belfast Telegraph called him “energized and energizing” and The Independent, London, called his music “noble poetry.”

As a pianist, Breslin said he has always had a naturally analytical and problem-solving approach to his own playing so the transition to teacher was a natural process for him.

“During my developing years as a musician, I have built a large vocabulary of how to express ideas clearly, how to fix technical problems and how to elevate artistry — channeling this approach to students who have different perspectives,” Breslin said. “My father was a fantastic history teacher and I absorbed a lot about how to communicate and engage with students. My goal as a teacher is to communicate all information in a way that engages my students.”

Breslin’s education and training has involved many different angles, cultures and schools of teaching, from London and Manchester in the United Kingdom to Spain to Michigan. His musicianship represents a wide range of approaches and influences of the Irish, British, Russian, French and American schools, he said, and his performing experiences in many amazing cities and countries with different cultures has shaped his outlook on life.

In addition to being a pianist and professor, Breslin is artistic director and festival director of the Walled City Music Festival, one of the most innovative and important arts organizations in Northern Ireland. It is dedicated to creating a brighter future for young musicians in Northern Ireland. Started 10 years ago with his wife, Sabrina Hu, the organization directs major festivals and concert events.

“As part of the piano faculty at ASU, I want to make sure that my students are able to become an extension of my network, to be involved in my existing projects and to initiate their own innovative and creative projects,” Breslin said. “I hope to bring a large group of ASU students and faculty each summer to the WCM International Piano Festival and Competition in Northern Ireland.”

Born in Derry, Northern Ireland, his international career as a concerto performer, solo recitalist and chamber musician has taken him to famous concert halls throughout Europe, the United States and Asia. He has performed with prestigious conductors and internationally renowned orchestras and quartets.

Breslin’s previous faculty positions include the Rudi E. Scheidt School of Music at the University of Memphis, Bucknell University, Bloomsburg University, the National University of Ireland in Maynooth and Queen’s University in Belfast, Northern Ireland. He has taught master classes and lectured at universities and conservatories in the U.S., Canada, China, Korea, Hong Kong, Portugal, Bulgaria, Spain, the U.K. and Ireland.