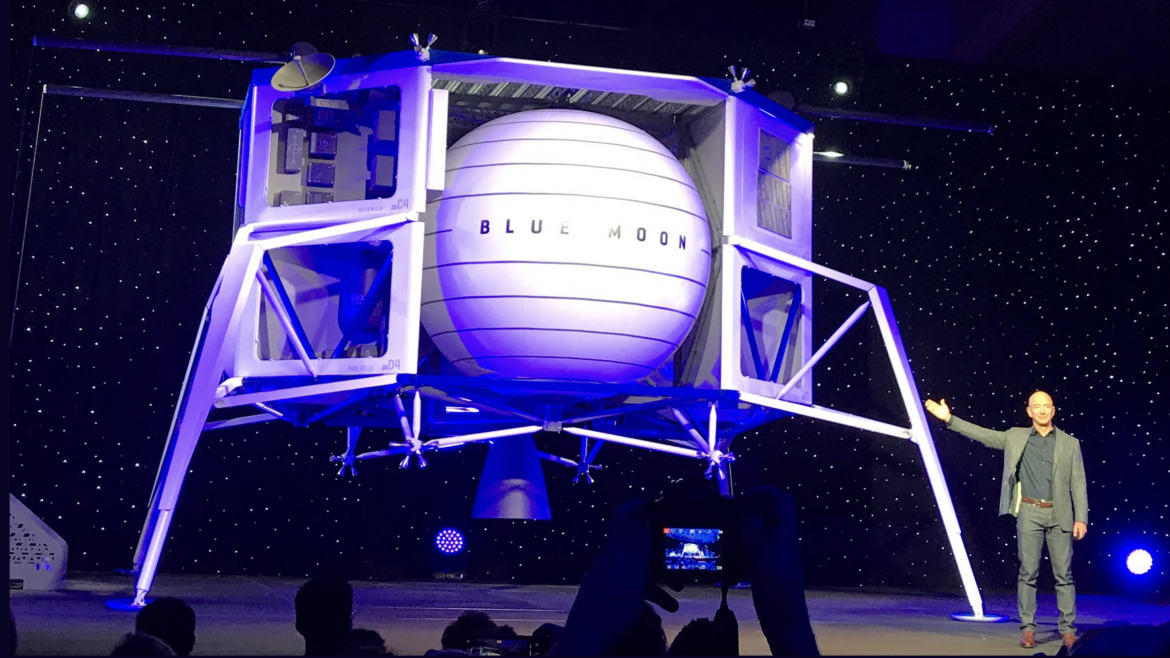 Announced today in Washington, D.C., by Blue Origin, Arizona State University has signed a memorandum of understanding with Blue Origin to send payloads to the lunar surface.

Blue Origin, a privately funded aerospace manufacturer, envisions a future where millions of people live and work in space. As part of this vision, Blue Origin is engaged in developing infrastructure for the creation of human spaceflight capabilities.

“ASU and Blue Origin are united in the passion for a positive human space future, and in the goal of partnering universities and the private sector,” said ASU School of Earth and Space Exploration director, Lindy Elkins-Tanton, who also co-chairs ASU’s Interplanetary Initiative.

ASU will develop one or more payload experiments to be launched aboard Blue Origin’s Blue Moon, a flexible lander delivering a wide variety of small, medium and large payloads to the lunar surface.

"It's wonderful to be working so closely with our skilled, innovative and entrepreneurial colleagues at Blue Origin,” said School of Earth and Space Exploration professor Jim Bell, who is also the director of ASU’s Space Technology and Science (“NewSpace”) Initiative. “This collaboration will provide opportunities for our students to get hands-on experience with space experiments and systems and for our faculty to make significant advances in space science, engineering, and education.”

Proud to be on this list! @JeffBezos @blueorigin #BlueMoon @II_ASU @ASU pic.twitter.com/yiDtXk0G3M

This Blue Origin-ASU memorandum of understanding follows last week’s successful launch of three ASU student-led payloads on Blue Origin’s New Shepard space vehicle, the first-ever student-designed and -built payloads to be launched into space and brought back to Earth. These payloads were funded by the Interplanetary Initiative, NewSpace and private donors Peter and Cathy Swan.

ASU, with experience in leading NASA missions and the capability of building space instruments on campus, has a long history of developing and building flight instruments for space and supporting the planetary and astronomy science investigations of their faculty.

ASU has developed a strong interdisciplinary faculty, incorporating astronomers, geologists, engineers, physicists, microbiologists, cell biologists, tissue engineers, immunologists, volcanologists and other researchers to create a superior research environment. The study of space, the planets and the origins of life involves expertise spread across many academic units including the School of Earth and Space Exploration, the School of Life Sciences, the Department of Physics, the Ira A. Fulton Schools of Engineering, the Herberger Institute for Design and the Arts, the School for the Future of Innovation in Society and the Center for Science and the Imagination.

The vision was even bigger than I expected. Positive hopeful aspiration for humankind! @JeffBezos @blueorigin #BlueMoon @II_ASU pic.twitter.com/IdtLaU1MmO

Top photo: Jeff Bezos introduces the Blue Moon, a flexible lander that will deliver a variety of payloads to the moon. Photo by Lindy Elkins-Tanton

University News Science Space exploration School of Earth and Space Exploration Department of Physics Ira A. Fulton Schools of Engineering Herberger Institute for Design and the Arts School for the Future of Innovation in Society Center for Science and the Imagination The College of Liberal Arts and Sciences School of Life Sciences Interplanetary Initiative Faculty Student

FBI director Christopher Wray invites you to visit him in Washington, D.C., where you will share a spotlight with country crooner Dolly Parton: All in a day’s work?It is for biosecurity superstar David Gillum, Arizona State University’s director of biosafety and biosecurity and chief of staff for Environmental Health and Safety.Gillum was presented with the 2018 Director’s Community Leadersh...

FBI director Christopher Wray invites you to visit him in Washington, D.C., where you will share a spotlight with country crooner Dolly Parton: All in a day’s work?

It is for biosecurity superstar David Gillum, Arizona State University’s director of biosafety and biosecurity and chief of staff for Environmental Health and Safety. 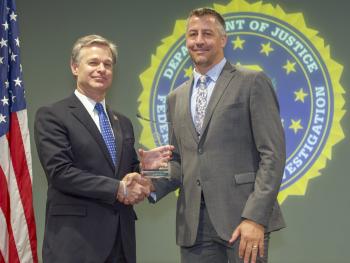 Gillum was presented with the 2018 Director’s Community Leadership Award on May 3 during a ceremony at FBI headquarters. Parton received similar recognition for providing about $9 million to support families affected by the 2016 Tennessee wildfires.

At ASU, Gillum is responsible for protecting the health and safety for those who work in the university’s more than 1,000 research laboratories. However, now his imprint is being felt internationally.

“Mr. Gillum has been at the forefront of international biosafety and security,” said Michael DeLeon, special agent in charge of the FBI’s Phoenix Field Division. “He has brought law enforcement, industry partners and academia together to increase awareness of biosecurity risks which directly impact the safety and citizens of our community. His efforts have also helped open dialogue, creating better trust and understanding amongst the public and private sectors.”

The Director’s Community Leadership Award was formally created in 1990 as a way to honor individuals and organizations that make extraordinary contributions to education and the prevention of crime and violence in their communities. Recipients of this award are nominated by each of the FBI’s 56 field offices and are recognized for their service above and beyond the call of duty to help keep America and its residents safe.

For Gillum, protecting researchers is more than a job; it might even be called a vocation.

“I think for the most part, when it comes to novel biotechnologies and biosecurity, the community doesn’t have a good understanding of what’s going on,” Gillum explained. “I want my friends, family and others around the world, who know very little about where bio is headed, to be informed so they can make educated decisions about their future and the future of society as a whole.”

When it comes to emerging biotechnology concerns, the focus today is on life-altering topics like genome editing, biological genocide, bringing back extinct species and modifying pests and pathogens to improve human and animal health.

“It’s hard to convey how serious these issues are,” Gillum said. “It’s like looking down the railroad tracks and seeing only the front of the train. It’s hard to see how close it is until it’s right upon you. And the train is nearly here.” Gillum’s goal is to educate and invite others into these important conversations.

Empathy comes easy to Gillum, who was raised in a remote Nevada town, in a family of nine, with scarce resources.

“My mother and father always taught me to follow the golden rule, help thy neighbor, and to strive to be a positive influence in the world,” Gillum said. “I like to see others succeed, and I have a deep-rooted desire to stand up for those who are disparaged and discriminated against and to help them find their voice, even when they may not realize they have one. “

According to Samira Kiani, ASU synthetic biologist at the Biodesign Institute and assistant professor in the School of Life Sciences, “David brings a unique passion to conversations surrounding biosafety and biosecurity and drives many efforts here at ASU which are essential for placing ASU at the forefront of these efforts internationally. Working with him on these aspects in the last two years has been a privilege for me, and he continues to bring new ideas to advance ASU’s stance in this emerging and important area.”

In the spirit of ASU, Gillum sees opportunities where others may not. According to FBI Phoenix Field Division leaders, Gillum approached the FBI Phoenix weapons of mass destruction coordinator when he saw a need to plan, train and educate the community about the risks posed by advanced and emerging biotechnologies. Going big, the result was the first-of-its-kind International Biosecurity Workshop.

"The workshop, which has gained international attention for its size and scope, brings law enforcement and laboratory professionals together to discuss issues of mutual concern regarding dangerous biological pathogens found in laboratories around the world," he said.

In addition to the workshop, Gillum established a task force to create a professional credentialing program for biosecurity professionals, partnering with FBI Phoenix and the Weapons of Mass Destruction Directorate to accomplish this goal. Gillum has worked with private and public partners to promote a standardized curriculum and encourage new research and publications in the biosecurity realm. He is working with the American Biological Safety Association to develop a knowledge- and skills-based credential that is available to police officers, emergency response personnel, facility managers, laboratory and production staff, researchers, safety and security staff and other parties interested in biosecurity.

“David’s innovative spirit in connecting academics, law enforcement and industry professionals at the Arizona Biosecurity Workshop is proof of Arizona State University’s social embeddedness design aspiration,” said Morgan R. Olsen, ASU executive vice president, treasurer and chief financial officer. “During the past three years, David has connected these individual groups that now may continue to address biosecurity and biosafety matters from a shared perspective that did not exist before. Our communities will benefit as a result of this work. David Gillum is well deserving of the 2018 FBI Director’s Community Leadership Award.”

Gillum credits the ASU spirit of openness to new ideas and courage to do things differently to his ability to make a big impact.

“This work has helped place ASU at the forefront of the global biosecurity enterprise, especially as it relates to community engagement,” Gillum said. “I know of no other institution that is doing these types of activities. Most other schools want to keep biosecurity top secret and the related technologies locked away, only accessible by experts and the wealthy.” In Gillum’s mind, there is much more to be done. He believes ASU has the potential to be a leader in accessibility, transparency and governance in biosecurity matters within the global community.

With an eye toward bringing young people into the conversation, Gillum tasked his team to develop an outreach program for elementary, high school and university students to encourage biosecurity and biosafety in classrooms. He credits his accomplishments to support from ASU’s Environmental Health and Safety team and partnerships with FBI Supervisory Special Agents Philip Bates and Andrew Braun and Special Agent in Charge Michael DeLeon, among others.

Gillum serves as president-elect for the American Biological Safety Association International. He co-founded the Arizona Biosafety Alliance and was elected president, among other key positions, in the organization. In 2015, Gillum established a partnership with ASU and the Mexican Biosafety Association to support biosafety collaborations between Arizona, Mexico and other South American countries.