On the border, grad hopes to make a difference in immigration policy

Joanna Williams didn’t travel lightly on her purposeful journey to earning a master’s degree in public policy, and she’s leaving Arizona State University with more than a diploma. The director of education and advocacy at the Kino Border Initiative (KBI) said she now has greater means to promote policies that respect the rights and dignity of migrants. 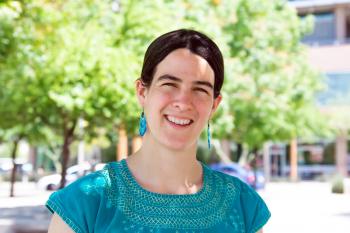 Joanna Williams, who is building a national reputation for her scholarship and fieldwork on migration, is the spring 2019 outstanding graduate for the School of Public Affairs in Watts College of Public Service and Community Solutions. Photo by Alexis Bojorquez Download Full Image

“I’ve seen through my master’s all the tools and best practices and other dimensions I think we can apply to our advocacy,” Williams said. “I’m really excited to implement that at KBI.”

Williams, who is building a national reputation for her scholarship and fieldwork on migration, is the spring 2019 outstanding graduate for the School of Public Affairs in Watts College of Public Service and Community Solutions.

KBI is a binational organization on the U.S.-Mexico border that serves deported migrants and asylum seekers through humanitarian aid, education, research and advocacy. Williams, who has practiced empathy for migrants since her childhood days in Denver, joined the staff in 2015. She has gotten to know people at different stages in their journey both in the United States as well as at the border.

“I care really deeply about them as friends and neighbors and brothers and sisters,” she said.

Williams first arrived at the U.S.-Mexico border by way of Georgetown University, where she first learned about the Kino Border Initiative as an undergraduate student in 2010. Georgetown sponsored her on a weeklong KBI immersion program.

She went to Georgetown with thoughts of becoming an immigration lawyer. But a career at the border held more appeal than a career in a Washington, D.C., office. She said a mentor told her there was nothing wrong with going to the border and loving people there. Her career focus shifted from becoming a lawyer who upholds laws to a position with an opportunity to influence the making of policy and laws.

For Williams, to spend time doing something other than concentrate on her work at KBI, ASU had to offer something special, and it did. She said she leaves the program with a better understanding of policy analysis and the political calculations in developing policy alternatives. That’s especially helpful on a subject as intense as immigration, she said.

Williams brought to the master’s program her life experiences of growing up in Denver attending school with children of immigrants from Mexico, coming of age as a high school volunteer teaching English to refugees and several years of scholarly work on immigration issues in Mexico and Central America, including stints as a Truman and Fulbright scholar. At ASU, she was a Barrett Endowed Scholarship recipient.

Completing course credits for her master’s degree involved at least 150 hours commuting to Phoenix from her home in Tucson and her work in Nogales, Arizona, and Nogales, Sonora, Mexico. There was also the challenge of balancing a demanding job with the commitments of graduate study. The past two years have been exhausting, but she said appreciates the dialectic between the intensity of her work and school, where she had time to “reflect and think more deeply.”

In graduate school, she continued her history of producing results from solid research. She was part of an independent study that developed orientation materials in a train-the-trainer model, which helps information about asylum reach people while they are still in Central America. The initiative provides the information before potential migrants invest significant financial resources and puts their lives in danger to reach the border.

Williams said she also enjoyed global development courses that informed her thinking about bigger-picture issues surrounding the movement of people.

“I believe that global development, especially from the perspective of business and sustainable industries, is critical to addressing the root causes of migration,” Williams said. “In a similar vein, scientific research in areas of sustainability and climate change is an important piece of addressing these challenges.”

Earning her master’s degree may conclude Williams’ robust research career. Her focus now is on carrying out the vision of KBI. While that, no doubt, will require additional research, Williams says she now sees herself in different roles.

“Maybe I’m not a researcher who’s carrying out the whole project, but I can set some of those visions and manage a bit of the research,” Williams said. “I think there’s a lot that we don’t know, and that information can help us better understand the implications of policy, better understand the options for support.”

Earning her master’s degree to advance her life’s work also is in keeping with Williams’ personal quest to be “grounded by the commitment to be humbly growing in love.”

“People throw out the word 'love' a lot, in a casual sense,” Williams said. “What I’ve really come to understand is the commitment and responsibility that comes with love. Love is much more than an emotion. It’s a dedication to somebody’s well-being. I’m still trying to figure out what that looks like.”

Editor’s note: This is part of a series of profiles for spring 2019 commencement.Jessica Columbus realized her interest in engineering at a young age but put her degree on hold to pursue another passion — ballet.Growing up in Kentucky, Columbus spent her free time with her dad, who was an industrial engineer, putting together model cars, planes and computers, which fueled her passion for t...

Jessica Columbus realized her interest in engineering at a young age but put her degree on hold to pursue another passion — ballet. Ballet dancer and engineer Jessica Columbus will start her career as an electrical engineer in the tanker division at Boeing just one week after graduation. Download Full Image

Growing up in Kentucky, Columbus spent her free time with her dad, who was an industrial engineer, putting together model cars, planes and computers, which fueled her passion for the engineering industry.

Always planning to follow in her dad’s footsteps, when it was time to go to college, Columbus studied mechanical engineering. However, her goal of being an engineer took a backseat when she was offered an opportunity to dance professionally as part of the Louisville Ballet.

Years later, Columbus discovered Arizona State University and decided it was time to complete her degree in engineering — but this time as an online student. ASU was the clear choice for Columbus because it included ABET (Accreditation Board for Engineering and Technology) accreditation and a good reputation, two things Columbus noted were crucial for landing a job. One surprise Columbus found during her experience at ASU was a supportive network and her ability to develop real connections with fellow students.

“There are so many learning moments being online — I learned that I liked working in groups better online than I did on campus,” said Columbus. “The other students also have lives, jobs and kids, so when you get into a group everyone really wants to be there, learn and do well. They’re all working toward the goal of changing their career.”

Columbus encourages those completing degrees online to connect with classmates sooner rather than later for support in classes.

“Reach out to peers and form connections. Talk to your professors, TAs and success coach. Ask for help when you need it and ask questions. It is easy to feel lonely doing an online program so form those connections,” says Columbus.

The long hours of studying have paid off as Columbus starts her career as an electrical engineer in the tanker division at Boeing just one week after graduation.

Answer: My “aha” moment was a combination of the little moments I had working on projects with my dad. Even as a kid I had always loved problem solving, especially when it had practical applications.

Q: What’s something you learned while at ASU that surprised you or changed your perspective?

A: I found there were classes that I liked a lot more than I thought I would — solid state design, for example. After taking the first course, I took as many as I could. In general, I enjoyed studying and learning much more this second time around.

A: The ABET accreditation and reputation. That was important to me when looking at online programs — getting a degree that will get you a job.

A: Dr. Linda Chattin in the industrial department. She taught statistics in a fun and engaging way, and I have used it in every semester since including for my senior design project. For the project I took on the data analyst role and felt really comfortable taking more than 20,000 data points and running hypothesis tests.

A: Reach out to your peers and form connections. Talk to your professors, the TAs and the success coaches. Ask for help when you need it and ask questions. It is easy to feel lonely doing an online program so form those connections.

Getting involved in your field within your community can help you make connections, too. I am personally involved with the Society of Women Engineers and attended the national conference where I was able to meet important people in the industry and interview for jobs. A lot of resources were available to me as a student and I used them all. From medical emergencies to natural disasters, I have had to use all those resources along the way.

Q: As an online student, what was your favorite spot to study or just think about life?

A: I would fund topsoil erosion research because in about 60 years, our topsoil will be gone and we won’t be able to grow anymore crops so it’s a very important cause that we don’t hear much about.