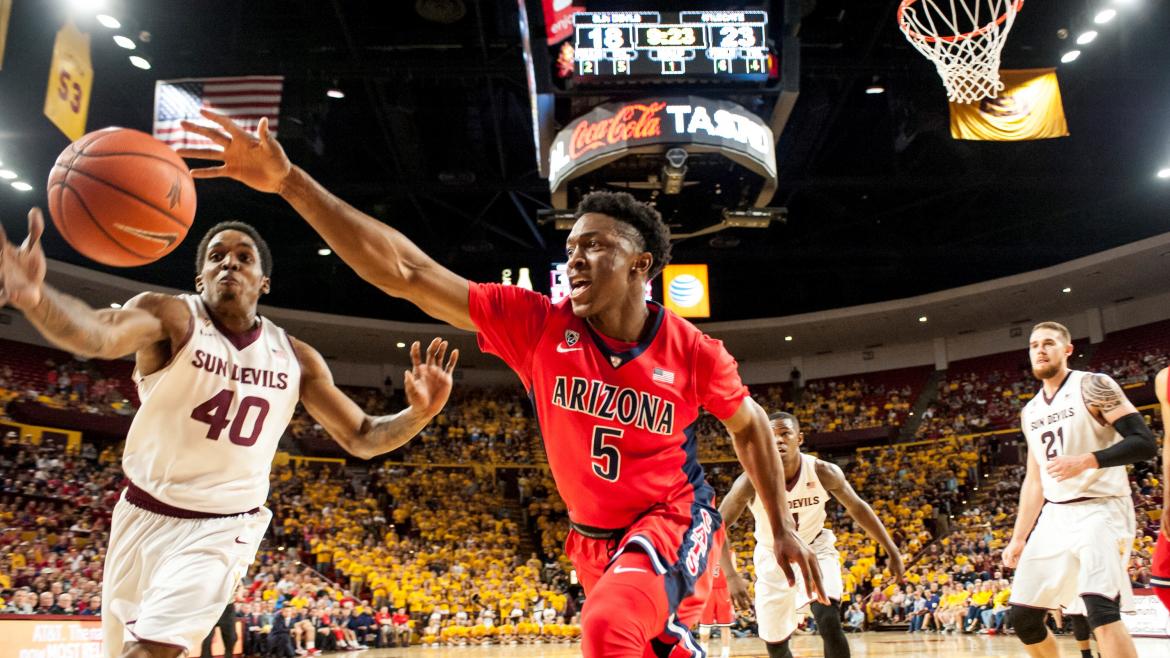 Who really hit the ball out of bounds?

The shot clock reads 0:05 in Game 7. Two players — one in yellow, the other red — hurtle towards the edge of the court, hands outstretched, chasing the ball. It sails out of bounds, and the play ends. Both players insist to the referee that the other touched the ball last. The crowd roars.

Deciding which player touched the ball last to determine possession is difficult because the event lasted only fractions of a second. But a wrong decision can impact the outcome of a game.

Players’ reactions in situations like this are often attributed to acting skills, even among professionals, but a team of Arizona State University psychologists wondered if both players might actually experience touching the ball first. In a paper published April 24 in Science Advances, the researchers tested how people interpret the timing and sequence of physical touches.

“When two players hit the ball out of bounds, there are frequently arguments between them about who touched it last,” said Ty Tang, an ASU psychology graduate student and first author on the study.

While it is possible that a player could lie in an effort to get the ball back, Tang and his graduate adviser Michael McBeath, professor of psychology, thought it could also be possible that both players really do experience hitting the ball first.

“With this clever study, Tang and McBeath zoom in on those moments that millions of sports fans look at every day,” said neuroscientist and New York Times best-selling author David Eagleman, who is an expert in time perception. “What would have previously been marked up to deceit or misjudgment has now been brought into the realm of basic neuroscience.”

What we perceive is not always reality

The research team created three tests to look at how people experience the order of perceptual events, like nearly simultaneous physical touches.

In the first experiment, two people sat across from each other at a table with a divider that prevented each participant from seeing the other. When a light flashed, the participants used their right index finger to quickly touch a sensor on the back of the other person’s left hand. Each participant then pushed a button to indicate whether they had touched the other person’s hand first or vice versa. The pair repeated this sequence 50 times, each time the light flashed. The light flashed at random times, and the participants were not told whether they were correct in their assessment of who had touched first.

When the touches happened at the same time both participants strongly believed they touched the other person earlier, answering 67% of the time that they were first.

“Even when the other person’s touch was 50 milliseconds earlier, it was still perceived to occur at the same time as one’s own touch,” Tang said.

The second experiment replaced one of the people with a mechanical device that tapped the participant’s hand. The third experiment had participants determine whether they touched first or a beep sounded first. These two follow-up experiments tested whether the presence of people was necessary and if the timing effects found in the first experiment generalized to other senses.

The results were the same: People always insisted they touched first. In the second and third experiments, there was again a 50-millisecond delay between the actual external touch or beep and when the participants felt it.

“The 50-millisecond time delay makes a lot of sense because we know the brain is always predicting our actions and perceptions” McBeath said. “People are generally accurate in the real-time perception of their own actions, like hitting and catching a baseball, but we need a little extra time to process something unplanned, like an unexpected tap on the shoulder. When something is unexpected, there is a slight perceptual delay while the brain figures it out.”

The findings from the study suggest the experience of an event a person initiates and one that happens to them are different. People seem to sequence these events in time by prioritizing their own action.

This study was funded by Arizona State University and the Global Sport Institute at ASU.

Editor’s note: This is part of a series of profiles for spring 2019 commencement. When Mickey Glover was student at Cesar Chavez High School in Phoenix, he was not thinking of going to college.Even though he had good grades, was a member of the National Honor Society and was on the wrestling and spring football teams, he was focused only on one thing: making money.“I grew up in low-income n... 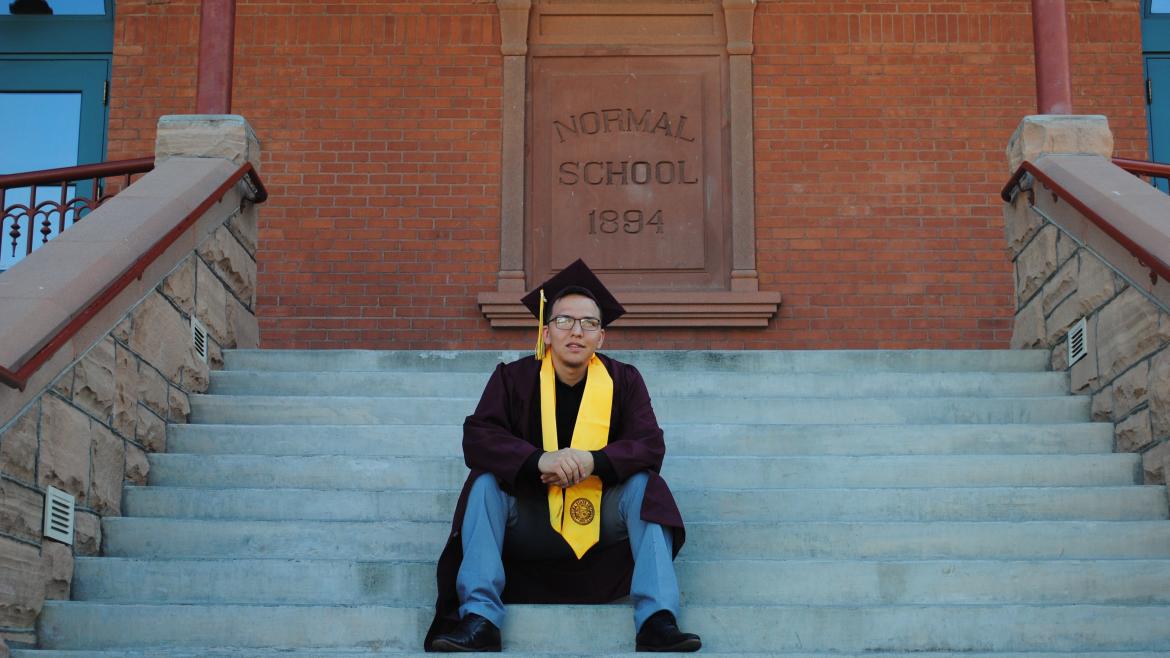 Oldest of 6 overcomes struggles to graduate with 2 degrees

When Mickey Glover was student at Cesar Chavez High School in Phoenix, he was not thinking of going to college.

Even though he had good grades, was a member of the National Honor Society and was on the wrestling and spring football teams, he was focused only on one thing: making money.

“I grew up in low-income neighborhood with a single mother and I’m the oldest of six,” he said. “My mom held two jobs to try to support us and she was also trying to go to nursing school.”

Unfortunately, the school turned out to be fraudulent and when it shut down, Glover’s mother had no degree and a lot of student loan debt.

“I was not thinking of college because of the financial position we were in. It didn’t seem realistic,” he said. “My goal coming out of high school was that I just wanted to work to help my mom provide for my siblings.”

Glover is graduating this semester with degrees in computer information systems and business data analytics from the W. P. Carey School of Business, thanks to a lucky break. In the summer before his senior year, he was invited to attend the free, weeklong Fleischer Scholars camp at Arizona State University.

“I met a lot of great mentors there and it made me realize that a university education could be realistic for me,” he said. “I was determined after that.”

He applied for dozens of scholarships and won three, which made attending ASU possible. One was the Horatio Alger Scholarship, which required an essay in which Glover described overcoming adversity. He described being mugged while he was in high school.

“It was traumatic because I had a gun pointed at me. It could have been my last day,” he said. “But I looked at it like the guy would get caught eventually and I personally didn’t want to allow him to impact my life.”

At ASU, Glover has been active in the Department of Information Systems Club and is a member of the Tau Psi Omega multicultural service fraternity, which has traveled to Hermosillo, Mexico, several times to visit boys in an orphanage.

Last year, he got an internship with Greystar real estate company. When the internship was over, the company offered him a job as a data analyst, so this semester, he’s working full time while taking 16 credits.

Glover will be the first in his family to earn a degree.

“My mom is so excited,” he said. “She doesn't introduce me as her son. It’s ‘This is my son who’s graduating.’”

Glover recognizes that he’s a role model for his siblings.

“Just getting exposed to university life helped to encourage me, so when I get a chance I bring all my siblings onto campus so they’re exposed to that too.”

Answer: It was a homework assignment. I came in as an entrepreneur major. I had my own little candy business in high school. But then one of my computer information systems classes forced me to really think. I loved being challenged. I think I got an 80 on the homework assignment but I wasn’t discouraged by the grade because I really enjoyed the rigor of the coursework. I found out about the major, and then I added business data analytics because analytics is the future.

Q: What advice would you give to those still in school?

A: I almost didn’t do the Fleisher program because I was concerned I wouldn’t make enough money to support my mom while I was at the program, but I talked to my managers and they gave me a break. You miss 100% of the shots you don’t take.

A: I find myself constantly going to the little computer lounge on the second floor of Hayden Library. I tried to study outside or at other libraries. I don’t use their computers or the white board, but I always find myself there.

Q: If someone gave you $40 million to solve one problem in the world, what would it be?

A: When I was in high school there weren’t many programs that promoted the university track or even getting a trade skill. There weren’t many programs that stimulated us. It always seems like they pushed community college. But what about the hope of attending a university? I would love to have programs for schools that don’t have a lot of resources. I want them to recognize that there’s hope.