Before Alex Miller even began kindergarten, his mom would take him to the Smithsonian National Air and Space Museum in Washington, D.C. He remembers looking up at the Saturn V rocket engine and the lunar roving vehicle and staring at the astronaut spacesuits. These early trips instilled in Miller a dream of human space exploration which later developed into a keen interest in robotic space exploration and astronomy. 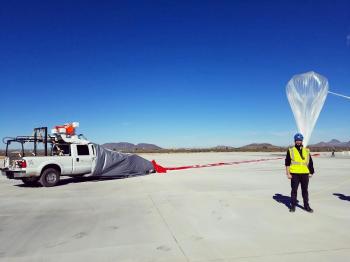 Alex Miller standing on World View's Spaceport Tucson launch pad. The balloon behind him is being filled with helium to launch a NASA Flight Opportunity Program-funded payload. Download Full Image

This May, Miller will be graduating with a PhD in exploration systems design (instrumentation focus) from Arizona State University’s School of Earth and Space Exploration. Miller says he chose ASU because of the school’s commitment to the next generation of interdisciplinary scientists and engineers.

“After making it through the program, I can confidently dabble in both the engineering and science disciplines interchangeably, which is extremely valuable in the workplace,” he said.

Miller says his graduate adviser, Professor Paul Scowen, was especially important in his academic success. “He taught me how to take a systems engineering approach to science instrument development,” Miller said. “This entails learning to establish good science drivers and engineering requirements and also how to rigorously verify and validate equipment in a lab environment — extremely important concepts in both academia and the industry.”

Answer: I benefited a lot from taking some time off and working in the years between earning my bachelor’s degree and the start of my PhD program. This helped me to better understand what my deficiencies and true interests were before I chose a grad program. Also, around the five-year mark of my program, I took some time to deeply evaluate what I wanted my career path to be after graduation. I was able to secure an aerospace job in Tucson before I finished my dissertation. The moral of the story is don't rush into big life decisions. Take time to evaluate your options, and think outside the box. If you look hard enough, maybe you can secure yourself an exciting non-stereotypical postgraduation career path!

A: The ISTB4 third floor "crater carpet" atrium is a great, very relaxing spot to work on group projects, but I particularly enjoyed Charlie's Cafe at the Biodesign Institute building for a coffee and pastry in the morning.

A: Human-caused global warming and climate change is a dire issue facing society. I don't think $40 million is enough to implement a complete solution, but perhaps the money could be used to invest in a clean energy company, start a public outreach campaign, and create a lobbying presence in Washington, D.C., to help educate and campaign for the end of fossil fuel use. As a start, we could retrain career fossil fuel workers to become skilled clean energy workers with better pay and safer workplaces, transitioning the workforce from heavy-polluting coal and oil industries to cleaner windmills, hydro and solar industries.