According to the Centers for Disease Control and Prevention, about 1 in every 59 children in the U.S. is diagnosed with autism, up from 1 in every 150 in 2000. They report that “about half a million people on the autism spectrum will become adults over the next decade, a swelling tide for which the country is unprepared.” 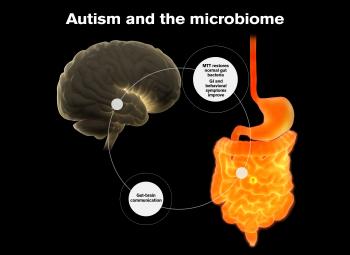 Recent research suggests our gut microbiomes affect brain communication and neurological health. Worldwide, interest is growing in the idea that changes in normal gut microbiota may be responsible for triggering various conditions. At ASU, a research team is exploring using the microbiome to treat autism symptoms. Image by Shireen Dooling Download Full Image

The apparent rise in autism spectrum disorder (ASD) and its stubborn resistance to treatment has spurred a legion of researchers to enter the field and explore the disability in innovative ways.

Currently, effective treatments for ASD include behavioral therapy, speech and social therapy, psychiatric medications and dietary and nutritional approaches. However, no medical treatments have been approved to treat core symptoms of ASD such as social communication difficulties and repetitive behaviors.

One promising avenue of autism research involves the gut microbiome, which is the collection of microbes that lives in our intestines and helps us in many ways, including aiding digestion of our food, training our immune system and preventing overgrowth of harmful bacteria.

Recent research suggests our gut microbiomes also affect brain communication and neurological health. Worldwide, interest is growing in the idea that changes in normal gut microbiota may be responsible for triggering a vast range of diseases.

Two years after treatment, most of the initial improvements in gut symptoms remained. In addition, parents reported a slow, steady reduction of ASD symptoms during treatment and over the next two years. A professional evaluator found a 45% reduction in core ASD symptoms (language, social interaction and behavior) at two years post-treatment compared with before treatment began.

“We are finding a very strong connection between the microbes that live in our intestines and signals that travel to the brain,” said Krajmalnik-Brown, a professor at the Biodesign Swette Center for Environmental Biotechnology at the Biodesign Institute and ASU’s School for Sustainable Engineering and the Built Environment. “Two years later, the children are doing even better, which is amazing.”

Roughly 30 to 50% of all people with autism have chronic gastrointestinal (GI) problems, primarily constipation and/or diarrhea that can last for many years. That chronic discomfort and pain can cause irritability, decrease attention and learning and negatively impact behavior.

An earlier study with only the antibiotic vancomycin had found major temporary improvements in GI and autism symptoms, but the benefits were lost a few weeks after treatment stopped despite use of over-the-counter probiotics.

So, the questions at hand are: What’s going on in the gut, how does it affect both physical and behavioral symptoms of autism, and how can we develop a long-lasting treatment?

Krajmalnik-Brown, Kang and Adams have shown that by transferring healthy microbiota to individuals lacking certain gut bacteria, it is possible to “donate” a more diverse set of bacteria into the patient and improve gut health.

In Australia, Fecal Microbiota Transplantation (FMT) was initially developed by Borody. At his Centre for Digestive Diseases in Sydney, Borody has overseen more than 18,000 FMTs for various disorders since 1987. He pioneered in Australia the use of FMT for colitis and Clostridium difficile infection, and was the first to use oral FMT to treat children with ASD. Only one dose of FMT is usually enough to cure C. difficile infections, but his patients with autism were far harder to treat. He discovered that three months of daily FMT was required to treat his autism patients, but eventually resulted in significant improvements in both GI and autism symptoms.

Based on his experience with his patients, Borody led the design of the clinical treatment used at ASU for this study. The MTT approach involves 10 weeks of treatment, including pre-treatment with vancomycin, a bowel cleanse, a stomach acid suppressant and fecal microbiota transfer daily for seven to eight weeks.

The initial open-label study, led by Krajmalnik-Brown and Adams and published in the journal Microbiome in 2017, concluded that “this exploratory, extended-duration treatment protocol thus appears to be a promising approach to alter the gut microbiome and improve GI and behavioral symptoms of ASD. Improvements in GI symptoms, ASD symptoms and the microbiome all persisted for at least eight weeks after treatment ended, suggesting a long-term impact.” The present study now shows the benefits are extended beyond eight weeks to at least two years post-treatment.

The ASU team compared differences in the microbiome of children with autism compared with typically developing children. At the start of the study, children with autism were found to have lower diversity in their respective gut microbes and were depleted of certain strains of helpful bacteria, such as Bifidobacteria and Prevotella.

“Kids with autism are lacking important beneficial bacteria and have fewer options in the bacterial menu of important functions that bacteria provide to the gut than typically developing kids,” Krajmalnik-Brown said.

“We originally hypothesized that our therapy would be efficient to transform the dysbiotic gut microbiome toward a healthy one. In our original paper in 2017, we reported an increase in gut diversity together with beneficial bacteria after MTT, and after two years, we observed diversity was even higher and the presence of beneficial microbes remained,” Kang said. He added that this may be one of the reasons for success in improving the gut health, but further mechanistic studies are warranted to define specific roles of gut microbes in the context of autism.

The work done at ASU is not only about treating patients but also about learning from the treatment in order to develop better formulations and optimize dosing.

“Understanding which microbes and chemicals produced by the microbes are driving these behavioral changes is at the heart of our work,” Krajmalnik-Brown said. The team’s new publication reports that the study demonstrated that two years after treatment stopped the participants still had an average of a 58% reduction in GI symptoms compared with baseline. In addition, the parents of most participants reported “a slow but steady improvement in core ASD symptoms.”

“Every family completed the study, and every family returned two years later for a follow-up evaluation,” said Adams, citing the families’ dedication to the research. “The treatment was generally well-tolerated with minimal adverse effects.”

"This is a world-first discovery that when we treated the gut bacteria in these children during our clinical trial two years ago to reset their microbiome with FMT, positive results are still continuing to be improving two years from the original treatments. I would call it the highest improvement in a cohort that anyone has achieved for autism symptoms,” Borody said.

Professional evaluation revealed a 45% decrease in ASD symptoms compared with baseline. Researchers note that although there may be some placebo effect, much of that effect appears to be real. At the start of the study, 83% of participants were rated as “severe” autism. At the end of the study, only 17% were “severe,” 39% were “mild/moderate” and 44% were below the cutoff for mild ASD.

Greg Caporaso, at Northern Arizona University, a leading expert in microbiome data science and a co-author on these studies, helped to analyze the microbiome data to better understand bacterial changes as a result of MTT.

“Drs. Krajmalnik-Brown, Kang and I are excited about the results, but we want to caution the public that we need larger clinical trials for this to become an FDA-approved treatment,” Adams said. Professional expertise is required for safe and effective treatment.

Adams has both professional and personal reasons for doggedly pursuing ways to help children with autism. His daughter was diagnosed with autism just before her third birthday. Adams, a President’s Professor at ASU’s School for Engineering of Matter, Transport and Energy and the chair of materials sciences, is also president of the Autism Society of Greater Phoenix, the largest parent support group in Arizona.

“Dr. James Adams is the reason why I started working on autism,” Krajmalnik-Brown said. “I had the methods to do all of the measurements and assessments in the microbiome part of the work, and he had the autism knowledge.”

Adams recruited patients, supervised clinical work and ASD assessments, and guided the patients through the trials, and Krajmalnik-Brown led the microbiome evaluations and helped plan the study.

All of the participants in the study exhibited chronic GI symptoms from infancy, including chronic constipation and/or chronic diarrhea. The treatment benefits extended beyond their physical symptoms, even causing some parents to note how much their children’s behavior had improved over time.

“It is very unusual to see steady gradual improvement after the conclusion of any treatment,” Adams said. “We only conducted the long-term follow-up study after several families told us that their child was continuing to improve significantly.”

Krajmalnik-Brown stated that the data suggests that the MTT intervention transformed the gut environment into a healthier status, leading to long-term benefit on both GI and ASD symptoms.

Adams said many of the participants in the trial shared common traits, including birth by C-section, reduced breastfeeding, increased antibiotics and low fiber intake by the mother and child, all of which lead to limited biodiversity in their gut bacteria. Due to the open-label nature of the study and the small sample size used, more research is needed in order to verify the usefulness of MTT as a therapeutic.

The initial study involved a “first-generation” estimate as to optimal dose and duration of treatment, and it was enough for 90% of the children to have substantial benefit. The team is now working on optimizing the dosing and duration to try to improve benefits even more, and to determine if booster doses may be needed in some cases.

Krajmalnik-Brown and Adams are working now on a larger placebo-controlled trial in adults with ASD to verify their results. More information on that study is available at autism.asu.edu. They also hope to do another study for children with ASD pending future funding.

The microbiota formulation used in the original study was developed at the University of Minnesota by Alexander Khoruts and Michael Sadowsky, who developed innovative methods for collecting microbiota from healthy, carefully screened donors and purifying and freezing them. They licensed their technology to Finch Therapeutics, who provided financial support for the manufacturing of the therapeutic microbiota used for the study.

This work was supported by Finch Therapeutics and the Arizona Board of Regents.