Julius Caesar was a bad man, certainly, writes ASU librarian Jim O’Donnell, but the book he wrote was magnificent

Julius Caesar’s own account of his nine years at war may be “the best bad man’s book ever written,” writes Arizona State University librarian Jim O’Donnell in the introduction of his new translation of Caesar’s work, “The War for Gaul.”

Caesar was a bad man, certainly, writes O’Donnell, but the book he wrote was magnificent — “clear, vivid and dramatic, a thing to be remembered and read for the ages.” 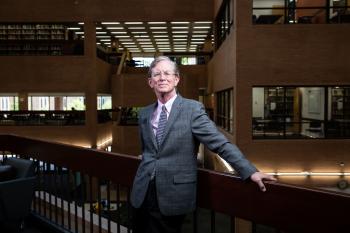 ASU Now talked to O’Donnell, a distinguished classicist and professor in the School of Historical, Philosophical and Religious Studies, about why he’s inviting readers — “brave readers” — to take an unflinching look at an unnecessary war, led by a politically ambitious and amoral man, who, among other things, was a master of language.

“There is no denying that this is a great work of literature, one of the greatest,” O’Donnell said. “And at the same time, there should be no denying that it is a bad man’s book about his own bad deeds.”

Question: Most people don’t think of the legendary Caesar as also being a great storyteller (who apparently exceeded in time management). What about his book is significant?

Answer: First of all, it's a great yarn. Let your imagination play with what it was like for a bunch of landlubber soldiers who'd never seen open water outside the Mediterranean try to navigate by the thousands across the English channel and only then learn about what tides and currents can do. Caesar is very dry about it all, but vivid nonetheless.

But it's also a book that obviously gets a lot of its interest from the fate of its author. The Caesar we meet in the story and the one who writes down the year's doings every winter back in Italy wasn't yet the Caesar of history, so we get to see him on the make, spinning his yarn to play back home, staging what are almost "media events" to impress the voters. It's a "you are there" moment of huge importance in world history.

Q: You’ve written that Cormac McCarthy would be an ideal writer of the story of Caesar in Gaul. How do you distinguish yourself from other translators of Caesar?

A: I keep it short, like Caesar: clean, crisp. I thought it was time to strip away some of the chatty helpfulness of other translations and let Caesar write the book he wanted.

Q: Your translation includes a map of Gaul and comes with year-by-year introductions for each part of the story. How do these elements work in the retelling of Caesar’s story?

A: Caesar is the magician who wants us to look where he wants us to look. I'm the guy who wants you to see how he's doing his tricks and what he's really up to. The introductions are meant to put you in his mind as he wrote, juggling military and political realities and looking to make some serious money out of his time in Gaul as well. I think you can enjoy the book more if you know all the things he doesn't want to tell you while he's telling you the ones he does.

Q: What did you learn in the process of translating Caesar’s story? Were there any surprises along the way?

A: The book we get from the ancient manuscripts is in eight "commentaries," basically one for each year of his time in Gaul. But he never wrote one for the last two years, so that got filled in later by one of his colonels, a man named Aulus Hirtius. By the time I got to that part, I'd been translating for a good while, rocking and rolling with Caesar's prose, when suddenly — when you start that last book — it's like going off-road in the mud in a Volkswagen beetle. The story is there and that's important, but I hope my translation makes it as clear as the Latin does that Caesar is the great writer here, and Hirtius is, well, a better colonel than he is a writer. My notes try to show just how clunky he can be and to let the reader then really feel how great Caesar — the writer — was. Caesar the general and politician? Make up your own mind.

O'Donnell will lead a talk about his new translation of Caesar's "Gaul" at Changing Hands Bookstore in Tempe, at 7 p.m., Wednesday, April 10.

Kristy Dohnel grew up in a small town of around 4,000 people; she lived in a mobile home on a 100-acre ranch. From little Bishop, California, she moved to Tempe to attend Arizona State University. Upon arriving, Dohnel didn’t know a single person on campus, but that didn’t stop her from getting involved.She is now two and a half years into her undergraduate degree and has pushed herself to par...

Kristy Dohnel grew up in a small town of around 4,000 people; she lived in a mobile home on a 100-acre ranch. From little Bishop, California, she moved to Tempe to attend Arizona State University. Upon arriving, Dohnel didn’t know a single person on campus, but that didn’t stop her from getting involved.

She is now two and a half years into her undergraduate degree and has pushed herself to participate in the political community both on campus and off. Before attending ASU she had no prior experience in politics, just an interest in the topic. 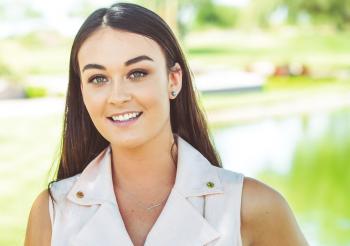 Dohnel landed an internship on a U.S. senate campaign, where she rose to the role of campaign scheduler and became a precinct committeeman in her legislative district. At the same time, she joined her local Republican women’s club and the political history and leadership club at ASU.

She is now working for Congressman David Schweikert as a community outreach liaison on top of pursuing her bachelor’s degree in U.S. history and a certificate in political history and leadership from the School of Historical, Philosophical and Religious Studies as well as a minor in political science from the School of Politics and Global Studies.

Her hard work in the political community is paying off: She was announced as one of two women to win the Dorothy Andrews Kabis Memorial Internship. The prestigious internship will give her the opportunity to work at the National Federation of Republican Women headquarters for the summer to gain valuable skills in political organization.

Dohnel sat down with us and answered a few questions about her upcoming internship.

Question: What was the process like applying for the internship?

Answer: The process consisted of filling out an application, getting three letters of recommendation explaining why I should receive the internship, (and writing) a short paper on my experience with politics in my state. Once I completed the application, I had to send it to the president of the Arizona Federation of Republican Women, where she then reviewed my application and sent it to the National Federation of Republican Women.

Q: What made you want to apply?

A: I applied because I have always wanted to work in D.C., especially in politics. The internship is vastly unique, covers my living cost, travel expenses and gives weekly stipends. This type of opportunity in D.C. is almost unheard of.

Q: How did you feel receiving your acceptance?

A: I was humbled beyond belief; I honestly did not believe I would be honored with the internship.

Q: What are you looking forward to most in the internship? What skills do you hope to gain from it?

A: I am looking forward to being in D.C. — I have never even been to the East Coast. Learning how to deal with the hustle and bustle of D.C. is a skill that not many people have, and I am especially excited to hone many new skills.

Q: Do you have any plans once you finish the internship?

A: Once my internship is over, I will be returning back to my current job working for Congressman David Schweikert as the community outreach liaison.

Q: Is there anyone you would like to highlight who supported you in this process?

A: Yes, of course, there are too many people to name that have supported me throughout the process. Nancy Cottle, I would like to thank first because she is the one who sent me the information on the internship then helped me fill out the application, and she wrote me an amazing letter of recommendation. After that I would especially like to thank, Dr. Kelli Ward and Yvonne Cahill for also writing me letters of recommendation. If it was not for them there is no way I would have been chosen for the internship.

Dohnel will live in Washington, D.C., for six weeks this summer and will be attending ASU next semester. She is on track to graduate in spring 2020.