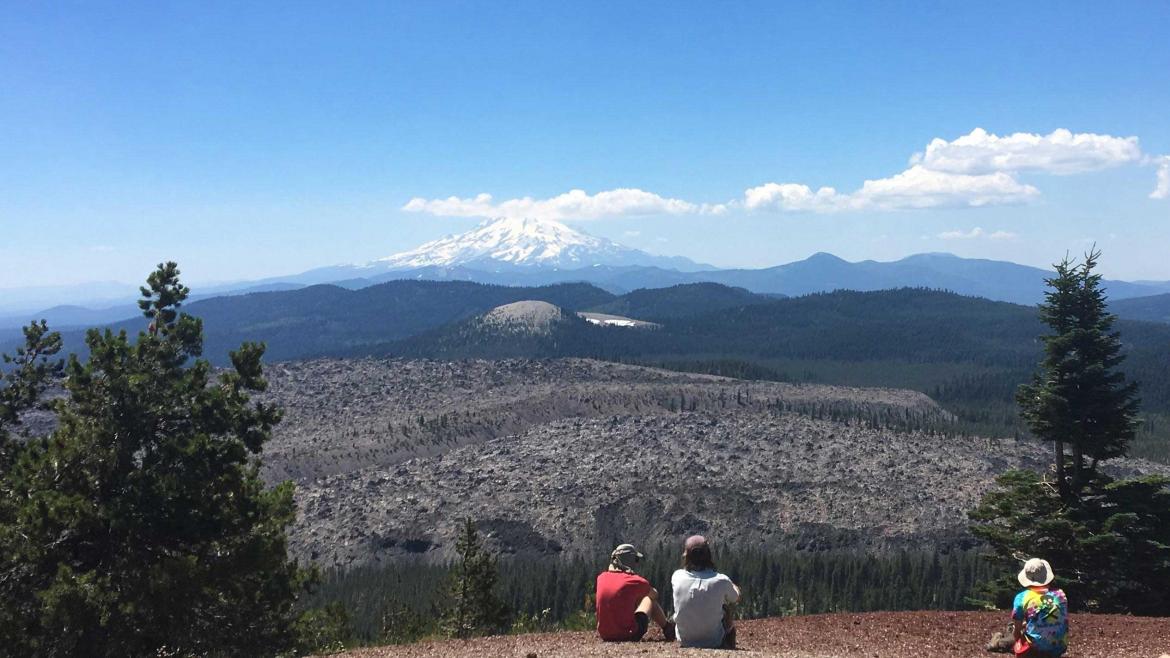 The string of volcanoes in the Cascades Arc, ranging from California’s Mount Lassen in the south to Washington’s Mount Baker in the north, has been studied by geologists for well over a century. Spurred on by spectacular events such as the eruption of Mount Lassen in 1915 and Mount St. Helens in 1980, scientists have studied most of the Cascade volcanoes in detail, seeking to work out where the magma that erupts comes from and what future eruptions might look like.

However, mysteries still remain about why nearby volcanoes often have radically different histories of eruption or erupt very different types of magma. Now scientists would like to find out why — both for the Cascades and for other volcanic ranges.

In a perspective article published recently in Nature Communications, a team of scientists led by Arizona State University School of Earth and Space Exploration geologist Christy Till proposes a reason for these differences in eruption behavior and argue for more “synthesis” research looking at the big picture of volcanology to complement the myriad research efforts looking at single volcanoes.

“Worldwide, almost a billion people live in areas at risk from volcanic eruptions,” said Till. “We are trying to understand what causes these different eruption behaviors to better protect the people who live close to volcanoes and better forecast future volcanic behavior.”

In addition to Till, the team includes scientists Adam Kent of Oregon State University, Geoff Abers of Cornell University, Helen Janiszewski of the Carnegie Institution for Science, Jim Gaherty of Columbia University and Brad Pitcher of Vanderbilt University.

For this study, the research team wanted to find out why are there are different types of volcanoes erupting different compositions of magma in different amounts and frequencies. They also wanted to determine why volcanoes in the Cascades Arc are so different from one another, even though they share the same tectonic processes.

To do so, they used data from huge geochemical databases that combine results from decades of studies of different kinds of rocks from around the world.

“If you look at the geology of a volcano, you can tell what kind of eruption is most likely to happen,” said co-author Kent. “Mount Hood, for example, is known to have had quite small eruptions in the past, and the impact of these is mostly local. Crater Lake, on the other hand, spread ash across much of the contiguous United States. What we would like to know is why one volcano turns out to be a Mount Hood while another develops into a Crater Lake, with a very different history of eruptions. This requires us to think about the data that we have in new ways.” 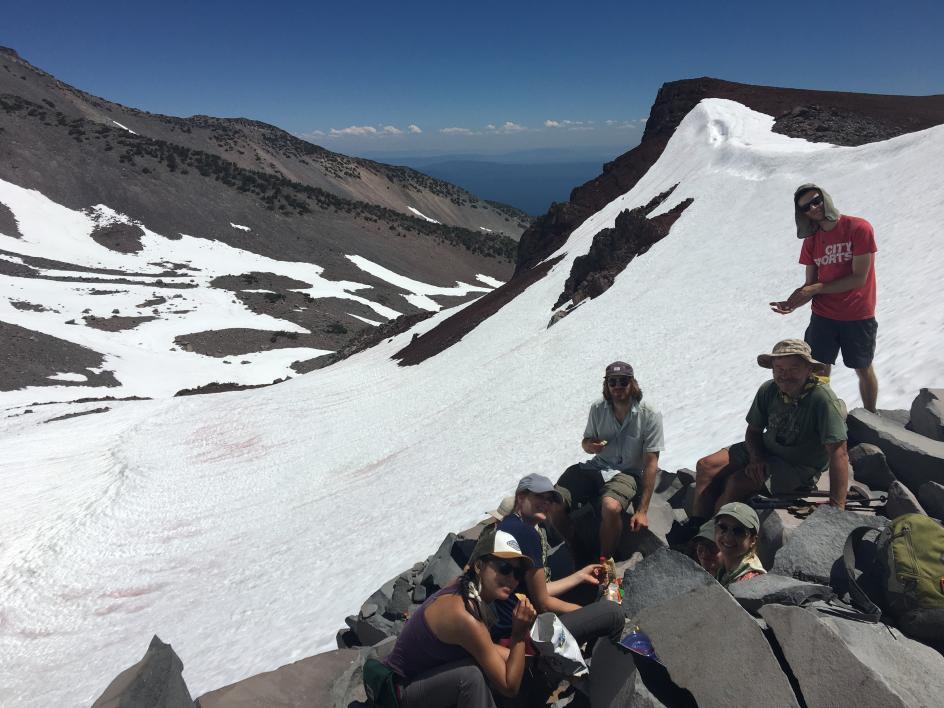 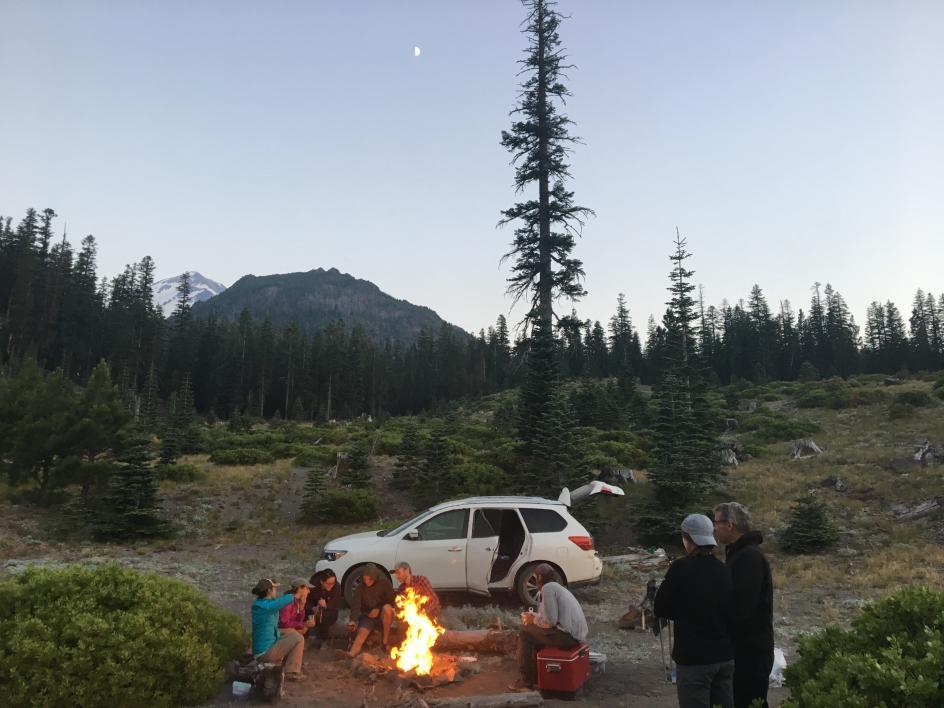 Till’s research group at camp after a day of fieldwork at Mount Shasta (snowy peak in background), in the Southern Cascades.

One of the challenges the team faced in using these data sets is that they needed to be filtered for quality and sampling bias. Knowing that the data sets were not necessarily equally representative of all rocks in one place, co-authors Kent and Pitcher spearheaded a statistical method to correct the data set for this bias.

They also determined that they could use a common variable, in this case heat, to try to link different sets of data and compare them more directly.

The team’s first discovery, using these worldwide geochemical databases and specific statistical methods, was that different amounts of magma are being generated beneath the volcanoes within the Cascades volcanic arc.

They also learned that the storage of these different amounts of magma in the Earth’s crust leads to different properties of the crust, like the speed at which earthquake waves travel through them and how hot the crust is.

“The study of volcanoes is fascinating in detail, and it has largely been focused on research into individual volcanoes rather than the bigger picture,” said Kent. “We now have the insight and data to go beyond looking at just Mount St. Helens and other well-known volcanoes. We can take a step back and ask why Mount St. Helens is different from Mount Adam and Mount Hood.”

Through these findings and methods, the researchers hope that other volcano researchers will try not only to understand how individual volcanoes work, but also investigate what produces the different type and frequency of eruptions that might occur when looking at a range of volcanos as a group.

“There is an amazing opportunity now to look at a much larger scale of questions using these data sets, which didn’t exist before,” explained Till. “We want to motivate scientists to work on these big questions using the data from these types of large databases with a similar statistical approach.”

The Oregon State University communications team contributed to this story.

Top photo: Students working with Christy Till look out at Mount Shasta while sitting at Medicine Lake Volcano in the Southern Cascades. These two volcanoes have markedly different shapes and eruption styles and they erupt markedly different compositions, yet they are formed by the same overarching tectonic processes. Photo by Christy Till/ASU

In 2016, the School of Molecular Sciences at Arizona State University embarked on a journey to change how biochemistry could be taught and create opportunities for students who thought that a bachelor’s degree was out of reach unless they went the traditional route of a brick-and-mortar school. That fall, pilot online general chemistry courses for biochemistry majors were offered for the first t...

In 2016, the School of Molecular Sciences at Arizona State University embarked on a journey to change how biochemistry could be taught and create opportunities for students who thought that a bachelor’s degree was out of reach unless they went the traditional route of a brick-and-mortar school. That fall, pilot online general chemistry courses for biochemistry majors were offered for the first time, followed by online organic chemistry the following spring. These pilot courses were the precursor to a much larger project — to deliver a fully online biochemistry program with an in-person lab.

The following fall of 2017, the first fully online bachelor’s degree in biochemistry in the country made its debut at ASU. 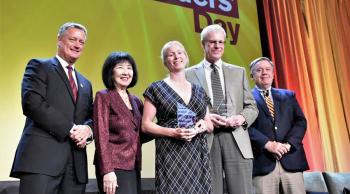 What did it take to get this first-of-its-kind, innovative program off the ground? First, it required considerable organizational skills to pull the pieces together. Second, it had to deliver the same high quality education and experience as the on-ground program, and also address the problem of hands-on laboratory courses if it were to be a legitimate BS degree. Third, and perhaps most importantly, it required a committed and unified faculty and staff to believe in the idea and get behind it.

The program startup had many moving parts, each with its own unique challenges. The content for many of the courses had to be built from scratch. Faculty who had never taught in a primarily digital format had to learn how to teach online. A significant challenge was figuring out how to fund and staff the program before revenue was generated. The biggest challenge and unknown, however, was knowing how many students would actually enroll in an online biochemistry degree program that required them to come to Arizona in the summer for accelerated lab courses.

“There’s a reason the nation’s first biochem program came out of ASU,” said Ian Gould, director of ASU’s online biochemistry program. “ASU encourages us to be innovative and the environment is very supportive of trying new things. And to make this work, we knew we had to do things differently.”

Clinical professor and online program coordinator Ara Austin believes education should be flexible and provide opportunity to all students, traditional or otherwise.

"Providing access to quality education to all students was something I always believed to be important. This is why I believed the online biochemistry program was a step in the right direction for SMS and decided to take part in it," Austin said. 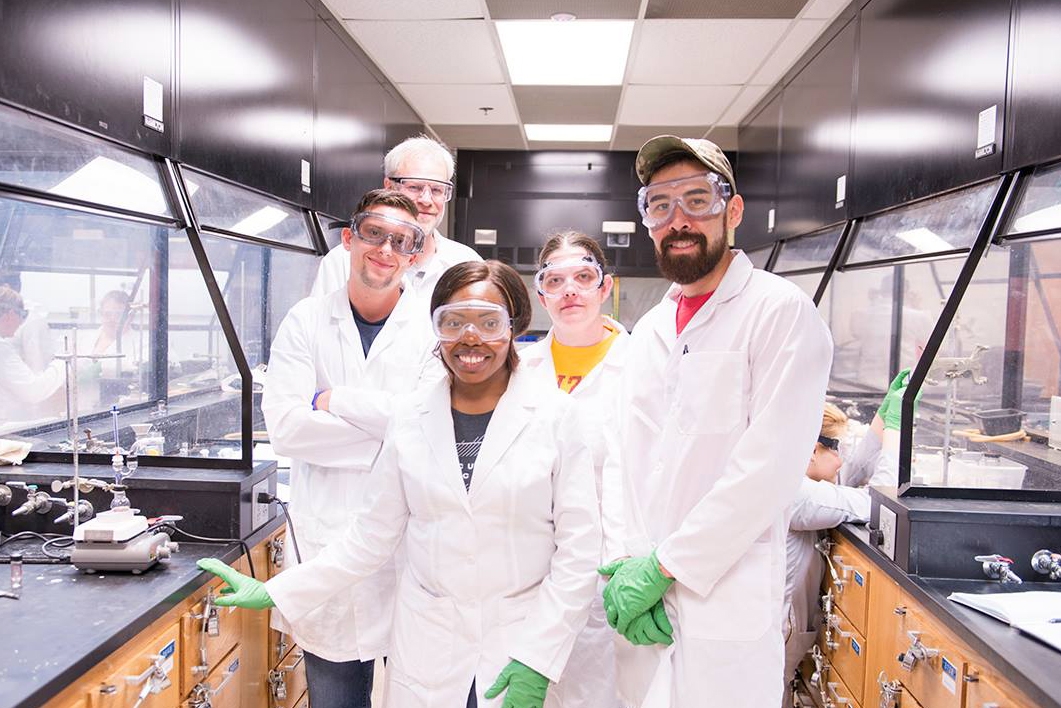 Gould with online biochemistry students in the summer lab.

Photo by School of Molecular Sciences 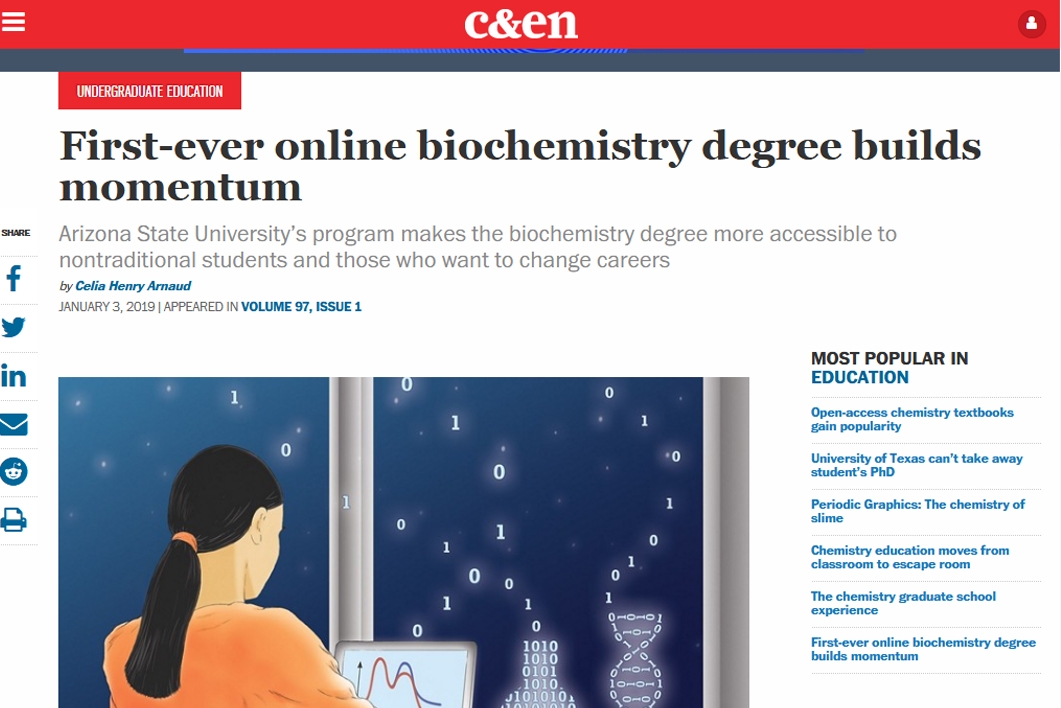 A write-up of the program in Chemical and Engineering News. 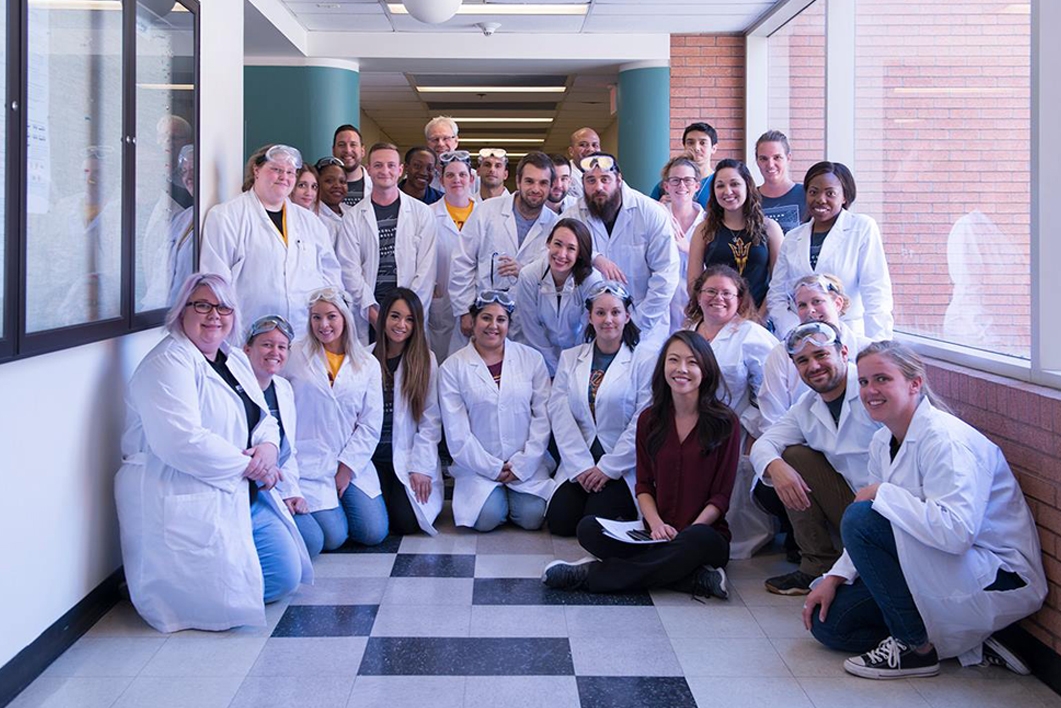 The condensed organic lab for online students with Ian Gould and Ara Austin . 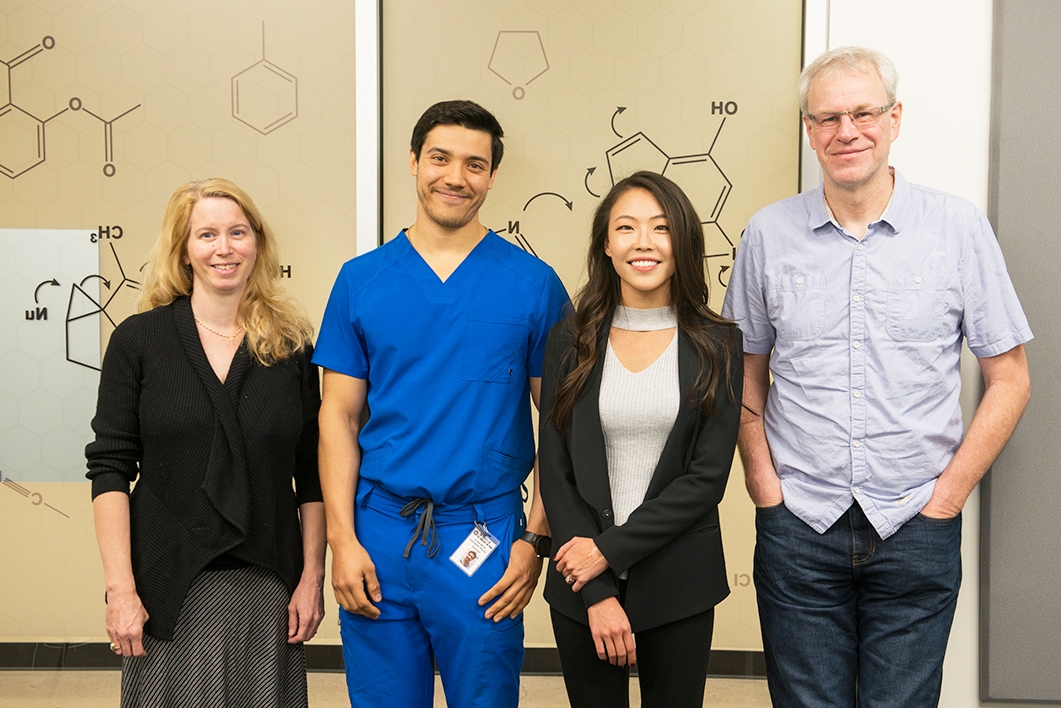 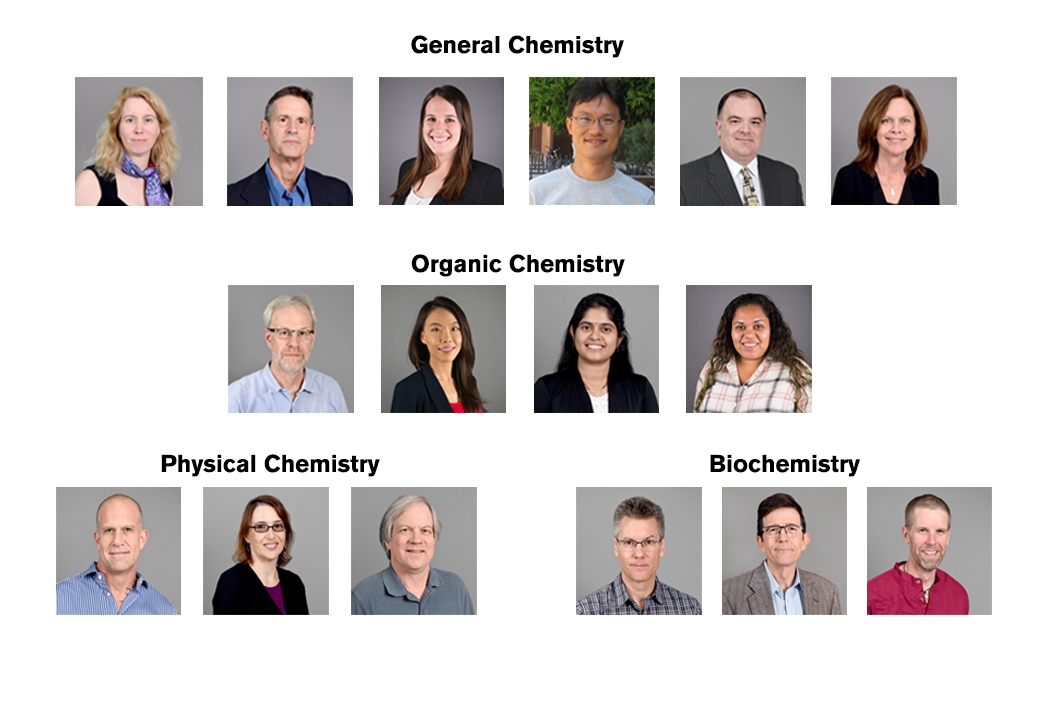 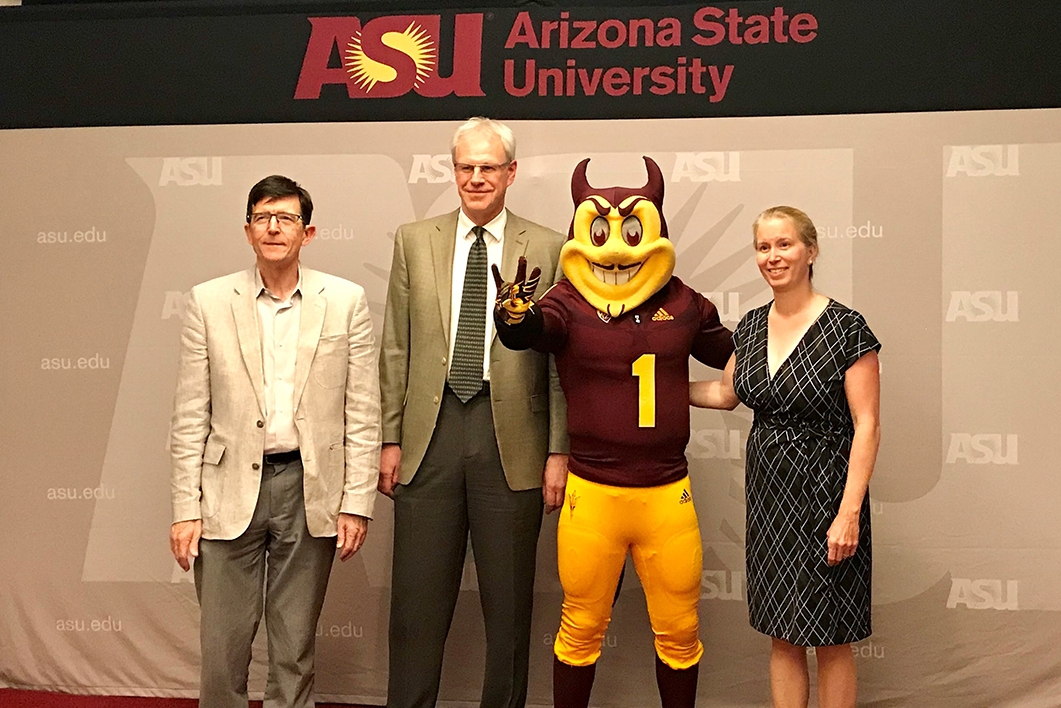 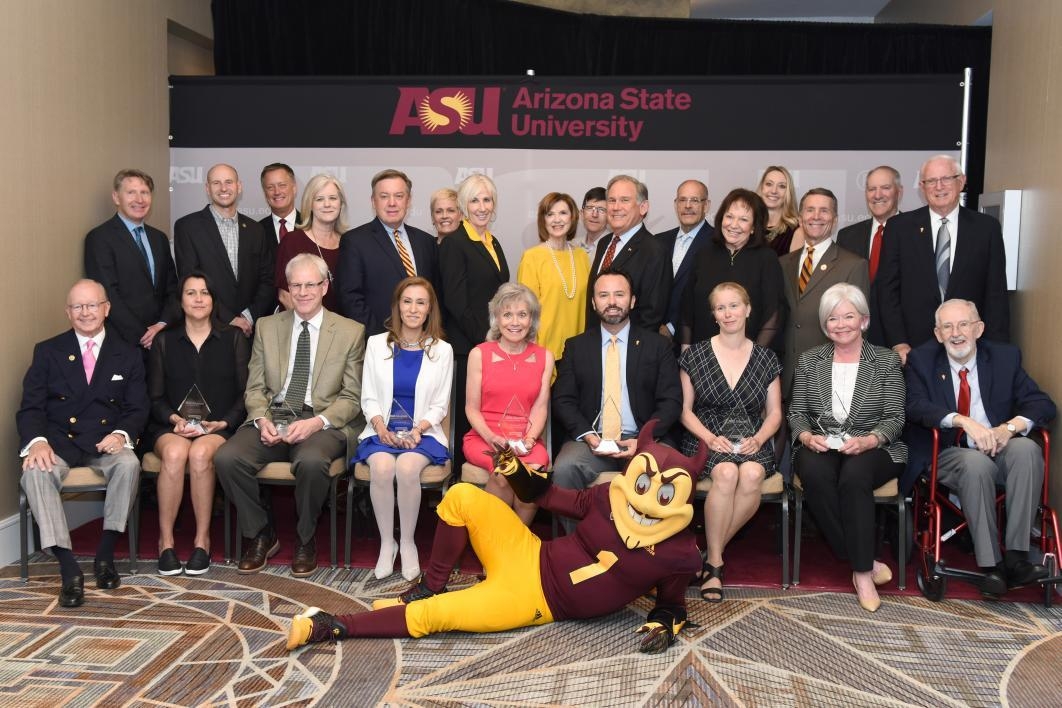 One of the most challenging parts of the program was supporting student needs when they came to Tempe for the lab portion of their degree. In addition to teaching in the program, Austin is responsible for organizing the on-ground lab courses, including housing, pre-health advising, meals and academic advisers for the students — even parking. The on-ground labs are the component that is primarily responsible for making the degree program unique — an online student has the same experience and support as an on-ground student: all critical pieces of the puzzle to ensure a true Sun Devil learning experience.

Another unique aspect is taking responsibility for helping the students make use of their degree. Austin is also involved in negotiations with the Association of American Medical Colleges to advocate for the students in the degree program who have aspirations in the medical field.

The philosophy behind the degree was to remain true to the ASU charter — to not only be the comprehensive public research university ASU is known for, but to make sure that the students from diverse backgrounds who sought out this program had all the tools and support they needed from the staff and faculty to be successful.

“We wanted to attract learners who otherwise couldn’t attend. Creating an authentic ASU science experience — they work in ASU labs, meet their cohorts and have that Sun Devil experience,” said Anne Jones, associate professor and associate director of academic affairs. “The result is a degree that is really very unique, it’s not about minting out new degree holders, instead it’s about educating a student and preparing them to go out into the workforce with valuable skills.”

The online biochemistry degree program has exceeded the expectations of all involved. It's gone from an enrollment of 50 students to more than 650 students just over a year later. But the courses and the program wouldn’t be here without the dedication of those faculty members who taught those first classes, many of whom stepped up to the plate and accepted extra teaching responsibilities without knowing exactly what to expect.

The degree program has attracted both local and national attention. Early this year the program was highlighted in the national periodical Chemical and Engineering News. And on March 20 at the annual Founders’ Day Awards ceremony hosted by the ASU Alumni Association, Jones and Gould were honored with the Faculty Teaching Achievement Award for being instrumental in establishing the program.