From the laboratory to the marketplace, Michael Kozicki has a passion for translating research in solid-state electronics into viable products for a broad and sustained impact on society.

After nearly 35 years of exemplary performance in use-inspired research at Arizona State University’s Ira A. Fulton Schools of Engineering, Professor Kozicki is being honored with the 2019 Daniel Jankowski Legacy Award. 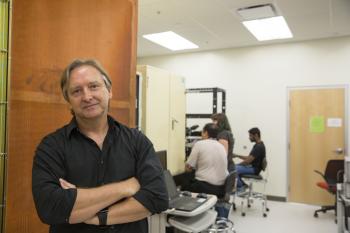 The award is one of the highest distinctions for engineering faculty in the Fulton Schools, given for unparalleled contributions to education, research and public service alongside a long-standing and demonstrated commitment to advancing the mission and values of the Fulton Schools.

“Michael has continually stood out as a leader in education, research and entrepreneurship,” said nominator Jennifer Blain Christen, an associate professor of electrical and computer engineering. “He has always amazed me with his ability to juggle these three endeavors all while exhibiting elegance, passion and a fantastic sense of humor.”

Kozicki is no stranger to developing innovative technologies with direct societal impact. He’s best known as the inventor of the technology that underpins Conductive Bridging Random Access Memory, or CBRAM, an ultra-low-energy data storage technology for computers being commercialized by several companies. The technology holds promise for the internet of things because it achieves significantly lower energy consumption and enhanced performance compared to current flash memory technologies and standard nonvolatile memories.

Additionally, Kozicki holds 56 U.S. patents and 32 international patents that include inventions ranging from the first cleanroom-compatible wheelchair to bio-inspired anti-counterfeiting technologies. His publications have been cited around 12,000 times, which is in the top tier of engineering researchers.

“Michael exemplifies the prolific spirit of innovation and entrepreneurship at the core of our use-inspired research mission,” said Stephen Phillips, professor and director of the School of Electrical, Computer and Energy Engineering, one of the six Fulton Schools. “He is driven to use his scientific contributions and inventions to make an impact on the world around us.”

Kozicki’s commitment to improving quality of life, economic development and the welfare of society contributed to him being named a fellow of the National Academy of Inventors in 2014.

More recently, Kozicki has been developing new cybersecurity methods to prevent counterfeiting and corruption of information. He’s also focusing on keeping phony integrated circuit chips and other parts out of critical applications such as aircraft, cars and medical devices.

Kozicki is a founder of two spin-off companies out of ASU. He has been a visiting professor at the University of Edinburgh in the United Kingdom and an adjunct professor at the Gwangju Institute of Science and Technology in Gwangju, South Korea. For 30 years, he has also held the designation of Chartered Engineer, the United Kingdom and European Union equivalent of the Professional Engineer designation in the United States.

Imparting students with skills to be successful in academia and industry

Daniel Jankowski — the award's namesake — had a profound effect on his students, their education and their future successes. He was a strong advocate of challenging students to reach their fullest potential and pursue meaningful work with effective teaching.

Consistent with Jankowski’s philosophy, Kozicki has demonstrated a strong commitment to education with particular emphasis on student mentorship, quality instruction and program development.

“I have a personal mandate to make sure my students are very marketable in the job space,” Kozicki said. “It’s great to see students get good jobs and be happy in their careers.”

Kozicki has mentored about 70 graduate students, many of whom have attained high positions in industry and academia. His former students include Bhagwat Swaroop, the executive vice president and general manager at Proofpoint, an enterprise cybersecurity company based in Sunnyvale, California; and Minhee Yun, a professor of electrical engineering at the University of Pittsburgh.

“Michael was always very welcoming and encouraging to students. I worked with him for about six years, and he never had anything negative to say,” Yun said. “I learned a lot from him, and I try to emulate his mentoring and teaching philosophy with my own students.”

Kozicki was one of the first people at the university to integrate entrepreneurship and business principles into engineering courses. He always makes it a priority to ensure students understand the economic context surrounding engineering.

Further, Kozicki has developed undergraduate and graduate courses in microelectronics and integrated circuit fabrication — including one of the few courses worldwide on semiconductor facilities, which is now offered online.

He has received a number of awards in recognition of his teaching capabilities, such as the Fulton Schools Teaching Excellence Award, a Golden Key National Honor Society Outstanding Professor Award, the College of Extended Education’s Faculty Award and the Institute of Electrical and Electronics Engineers Phoenix Section Outstanding Educator Research Award, among others.

Given every two years, the award was established to honor the distinguished 40-year academic career of Jankowski, who was a professor in ASU’s College of Engineering and Applied Sciences, which would later become the Ira A. Fulton Schools of Engineering. He served as associate dean of academic affairs and interim dean before retiring in 2004.

“I’m delighted to receive the Jankowski Legacy Award,” Kozicki said. “The award means quite a lot to me because I know Dan Jankowski well. For me to be associated with his name is quite humbling.”

Is space the final frontier for the benefit of all mankind — or possibly the world’s new battleground?An Arizona State University professor will attempt to answer that question in a conference next week.ASU Gammage will be the host site for TEDxASU 2019 "NextGen," which takes place March 25 and will focus on life in the 22nd century. Nine speakers — including five ASU faculty members — wil... 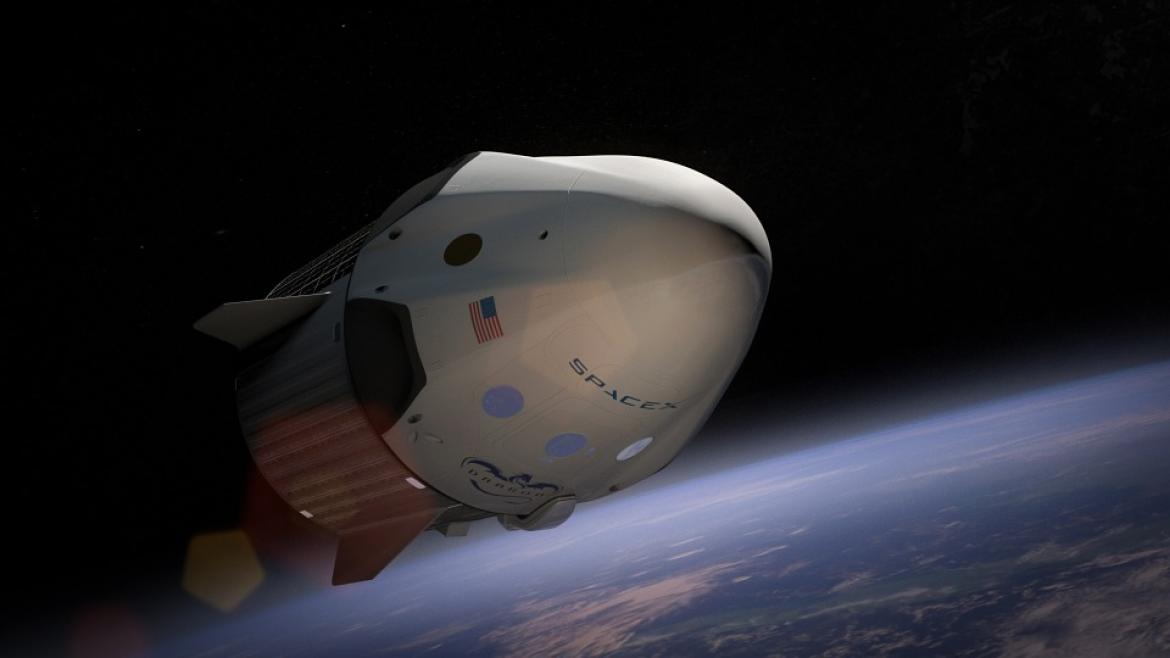 ASU Gammage will host 'NextGen' event on March 25; presentations will examine technology in the 22nd century

Is space the final frontier for the benefit of all mankind — or possibly the world’s new battleground?

An Arizona State University professor will attempt to answer that question in a conference next week.

ASU Gammage will be the host site for TEDxASU 2019 "NextGen," which takes place March 25 and will focus on life in the 22nd century. Nine speakers — including five ASU faculty members — will explore how we can take part in building that future together.

Timiebi Aganaba-Jeanty, an assistant professor in the School for the Future of Innovation in Society with a courtesy appointment in the Sandra Day O’Connor College of Law, spent a majority of her career in the space industry before coming to ASU. She believes the days of space as a sanctuary are long over, as evidenced by the more than 65 countries pouring billions of dollars into space research and development programs.

That certainly increases the risk of potential conflict one day, said Aganaba-Jeanty.

ASU Now caught up with Aganaba-Jeanty as she prepared for her March 25 presentation. 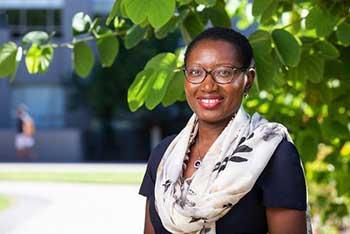 Question: What ground will your presentation cover?

Answer: My presentation is titled “Is a Space Future Without Conflict Possible?” I really have a unique perspective on space, having lived and worked on space research in four different countries, including starting my career as a legal officer at the Nigerian Space Agency. My presentation thus takes the audience on an international journey with regards to the way space is viewed from different lenses. It also covers the age-old dilemma of answering the question “Is space worth the investment?” and “Who benefits from exploration?” As more players engage in space exploration, is there an increased risk of conflict and if so, what can be done about that?

Q: Could space become a war zone in the next 50 years?

A: It seems likely that the days of thinking about space as a sanctuary are long over. The space domain is now viewed as a strategic territory much like Antarctica and other areas of the global commons that hold immense potential, even if we have not quite figured out what that potential is yet. As such, it is likely that space will increasingly be seen as a domain in which assets need to be safeguarded and protected. That does not mean it will become a war zone, and we are working toward developing rules of the road and confidence-building and transparency measures to minimize the risk of that happening.

Q: In the beginning, space had two dominant actors. Now, there are many countries and private companies wanting in on the action. How does that impact what the current U.S. administration will do?

A: According to Euroconsult, just on the government side alone, there are over 65 countries investing $10 million or more on space per year. And if we look at the world of startup investments in the space domain, startup space ventures have attracted over $18.4 billion of investment since 2000 according to Bryce. All that is to say, space is really seeing a boom right now. Companies like Elon Musk’s SpaceX, Jeff Bezos’ Blue Origin and Richard Branson’s Virgin Galactic have really inspired the population about the potential of increased private and commercial engagement in space. This means that the current administration has to think long term about how that relationship will work with space becoming a multistakeholder environment. How do we spur innovation while ensuring adequate regulatory regimes to provide oversight and supervision of these increasing actors? How do we ensure that we don’t create more and more space junk as more actors use the space domain?

Q: What, in your opinion, would increase the potential for conflict?

A: Lack of transparency and Earth geopolitics extending to space, generally. The issue we have in space is that it is often difficult to determine intent till you actually see the end result. States also find it difficult to share some of the enabling technologies because of its sensitive nature, but if we don’t ensure that space is open for all and that people are actually facilitated to cooperate and find opportunities to practice and build in trust, it will not get any easier to determine intent, which will lead to misunderstandings.

A: Space is very political. For many scientists and enthusiasts, it looks like it’s all about science and technology. I may be biased as a policy analyst, but it seems that there could be a great many easier domains to focus on if it was all about science! The fact is that space captures the human imagination for whatever reason. It drums up some terror about the unknown, while stimulating the imagination about the possibilities it holds. This can certainly be used for political gains.