Romello White tied his season high with 19 points (8-10 FGs) and Zylan Cheatham put up his 13th double-double of the season (13 points, 13 rebounds) to help lead Arizona State to a 83-72 win over UCLA in the quarterfinals of the Pac-12 Tournament.

Putting people in the technology equation

There are two narratives in climate change right now. One is the day-to-day drumbeat of news stories, usually a new scientific study, and usually put aside with the day’s second cup of coffee.The second is the latest natural disaster: Houston, Puerto Rico, Northern California. The disaster memory half-life is very short.“In about nine months, people forget,” said Jeffery Mount, a panelist a... 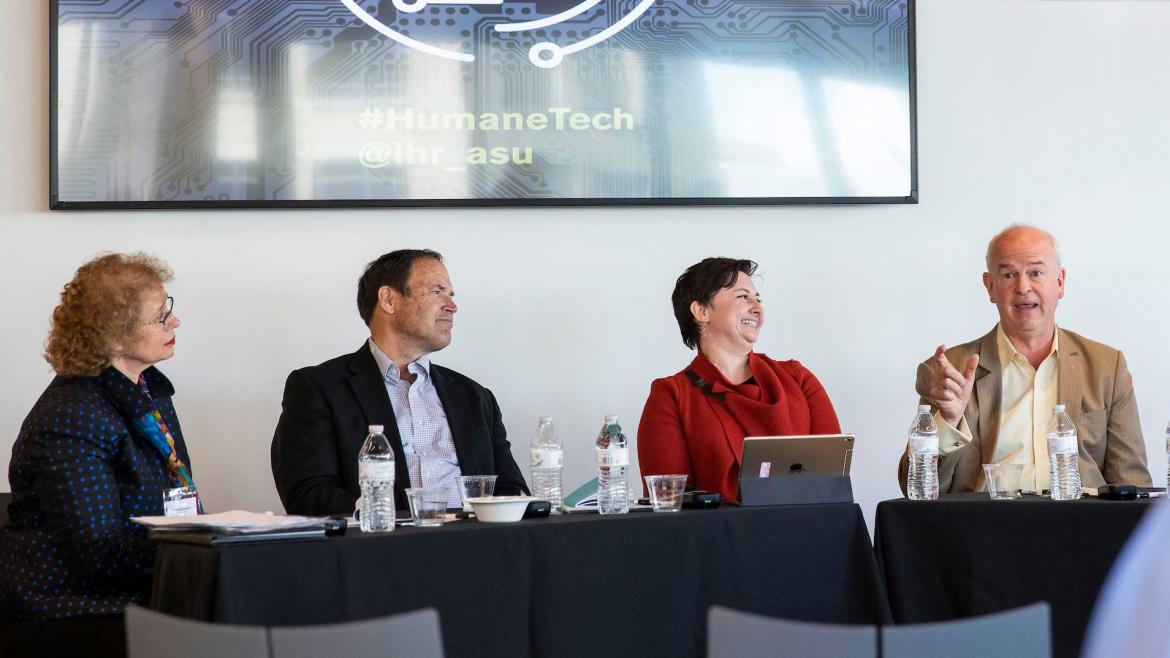 Putting people in the technology equation

There are two narratives in climate change right now. One is the day-to-day drumbeat of news stories, usually a new scientific study, and usually put aside with the day’s second cup of coffee.

“In about nine months, people forget,” said Jeffery Mount, a panelist at Arizona State University’s Future of Humane Technology symposium Thursday at the Barrett & O’Connor Washington Center in the nation's capital. Forgetting drives political entropy, he said. “When a natural disaster occurs, you must leverage it to the best of your ability.”

The panel discussion, one of three centered around placing the human element in technology, revolved around narratives of climate change.

“Tensions between story and data,” it was described by the moderator, Jeffrey Cohen, dean of humanities in The College of Liberal Arts and Sciences at ASU. The symposium was sponsored by ASU’s Institute for Humanities Research.

Panelist Mount discussed the forgetfulness of people when it comes to climate change and its visible effects. Mount has many titles — senior fellow at the Public Policy Institute of California, emeritus professor of Earth and planetary sciences, founding director of the Center for Watershed Sciences at the University of California at Davis — but his most memorable has been bestowed upon him by the media: “Dr. Doom.”

“We are seeing climate change unfold before our eyes,” Mount said. “The humanities do narratives better than anyone.” 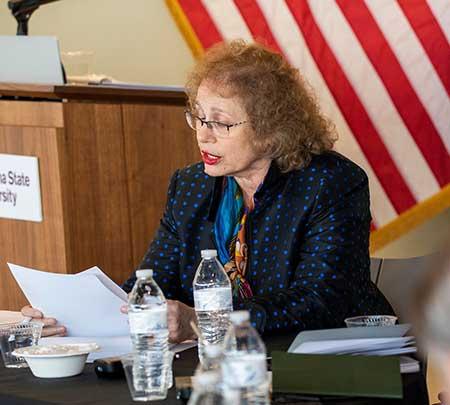 During the Future of Humane Technology symposium Thursday at the Barrett & O’Connor Washington Center, ASU Regents' Professor and Director of Jewish studies Hava Samuelson said that religion, with its moral imperatives, is well-suited to address and communicate climate change. Photo by Deanna Dent/ASU Now

Hava Samuelson, Regents’ Professor and director of Jewish studies at ASU, came at the problem from the perspective of religion. Her interdisciplinary research explores potentially complementary relationships between science and religion.

Religion, with its moral imperatives, is well-suited to address and communicate climate change.

“The kind of stories we tell about the AnthropoceneThe Anthropocene is considered the period of time during which human activities have had an environmental impact on the Earth, regarded as constituting a distinct geological age, according to Merriam-Webster. will determine whether we survive,” Samuelson said.

“It is within religious worldview ... that people organize their lives,” she said. “Diverse communities will need to develop a shared language. ... Our future survival depends on being able to listen to what is being said.”

All world religions have inspired activism in climate change, she said. What’s needed are narratives that see humanity as part of the web of life.

“Put the value of care at the center of everything,” she said.

Gary Dirks, director of the Julie Ann Wrigley Global Institute of Sustainability and LightWorks at ASU and a former oil company executive, said the war over climate change is over. The only thing that is left to do now is negotiate the surrender.

“The energy system is going to transform,” Dirks said. “That is inevitable.” It is transforming not only because of climate change, but because of technology and market forces.

“We are rapidly entering into a point in time where humanities can play a really outside role in how this all comes out,” he said.

“We can’t know today what the final system will look like or how we’ll get there,” Dirks said, adding that the current narrative is polarized and unhelpful.

How does justice get built into this transition? “How we do that is completely unclear,” he said. 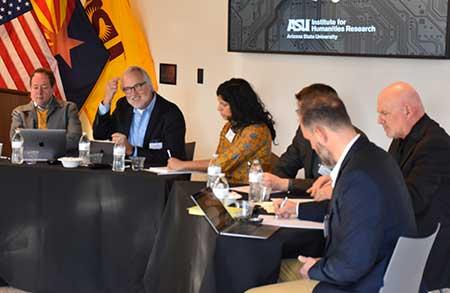 Melissa Kenney came to the discussion from backgrounds in both academia and the federal government.

“I’ve never worked on a complex problem with a win-win solution,” she said. “What are the ethical and moral dimensions of solutions?”

She characterized adaptive environmental management — decision-making in the face of uncertainty — as “more aspirational.”

“Alarm bells are being set off, and it really shows us the criticality of the situation,” Kenney said. “We all created this; now we all have to solve it. We’re all in this together. ... We are creating the future of people who haven’t arrived yet. ... We need all hands on deck. It’s a problem, but it’s a problem we can solve.”

Asked about their visions of the world in 2050, panelists were optimistic.

“We will not deal with these issues from the standpoint of pessimism,” Dirks said. He predicted the world will not be at zero net emissions, but well advanced. Outstanding technical barriers, like long-term energy storage, will be solved by then.

“Where are the possibilities for things to go right?” said Kenney, who talked about the U.S. Virgin Islands, where 95 percent of everything was destroyed by hurricane and is now being rebuilt with a view towards resilience and sustainability

“Look at what the Dutch are doing,” said Mount, referring to the elaborate flood-control measures the Netherlands has built over the past 30 years.

Earlier in the day, the symposium featured a keynote by ASU President Michael M. Crow, as well as two other panels: “Humane Intelligence in the Age of AI, Algorithms and Autonomous Systems,” moderated by Gaymon Bennett, associate professor of religion, science, and technology at ASU; and “Preserving the Person in Personalized Medicine,” moderated by Deborah Helitzer, dean of the College of Health Solutions at ASU.