The Sun Devil Baseball team now sits at 8-0 after picking up a 4-3 victory over Pepperdine on Tuesday evening at Phoenix Municipal Stadium.

ASU SciHub workshop brings science, engineering and art experts together to change how we see the world

Sunlight passing through a glass prism makes a rainbow, but the rainbow colors we see are more than just red, orange, yellow, green, blue, indigo and violet.Those colors are made of waves of light and are a very small part of a larger collection of energy-carrying waves called the electromagnetic spectrum. Some living things, like insects and crustaceans, can see other kinds of energy waves, but p...

ASU SciHub workshop brings science, engineering and art experts together to change how we see the world

Sunlight passing through a glass prism makes a rainbow, but the rainbow colors we see are more than just red, orange, yellow, green, blue, indigo and violet. 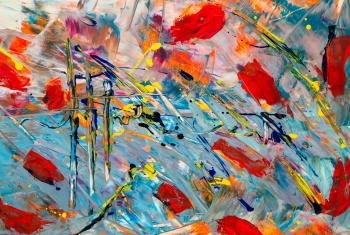 An important step in the process of enhancing human vision will happen when experts from science, engineering and art gather for the Science, the Arts and Possibilities in Perception (SciAPP) workshop on March 6-8, 2019, at the Tempe Mission Palms Hotel. Photo by Steve Johnson from Unsplash.com Download Full Image

“Vision is our most developed sense and is our portal to the external world,” said Frank Wilczek, who is a Distinguished Origins Professor at Arizona State University and the 2004 Nobel laureate in physics. “Yet, vision does not remotely exhaust the electromagnetic signals that arrive at our eyes.”

But, are the other parts of the electromagnetic spectrum really beyond the possibilities of human vision?

ASU’s Science Hub (SciHub) is working on an answer to that question. SciHub is co-directed by Wilczek, who is the Herman Feshbach Professor of Physics at MIT and has appointments at Stockholm University and Shanghai Jiao Tong University, and ASU’s Lawrence Professor of Solid State Sciences Nathan Newman. The goal of SciHub is to solve complex problems like how to enhance vision by leveraging the resources and expertise ASU has to offer. The SciHub is supported by Michael Crow, president of the university, and Sethuraman “Panch” Panchanathan, executive vice president and chief research and innovation officer of ASU Knowledge Enterprise Development. The group is currently exploring how to expand the colors people can see.

The convergence of diverse groups of people — like scientists, engineers and artists — and ASU’s resources will remove barriers to solving complex problems such as expanding human perception, Newman said.

An important step in the process of enhancing human vision will happen when experts from science, engineering and art gather for the Science, the Arts and Possibilities in Perception (SciAPP) workshop on March 6-8 at the Tempe Mission Palms Hotel. The workshop pairs talks from scientists, engineers, artists, designers and entrepreneurs with opportunities to listen to live music and view art. The SciHub is organizing the SciAPP workshop in collaboration with another ASU interdisciplinary group, the Science of Art, Music and Brain Activity. 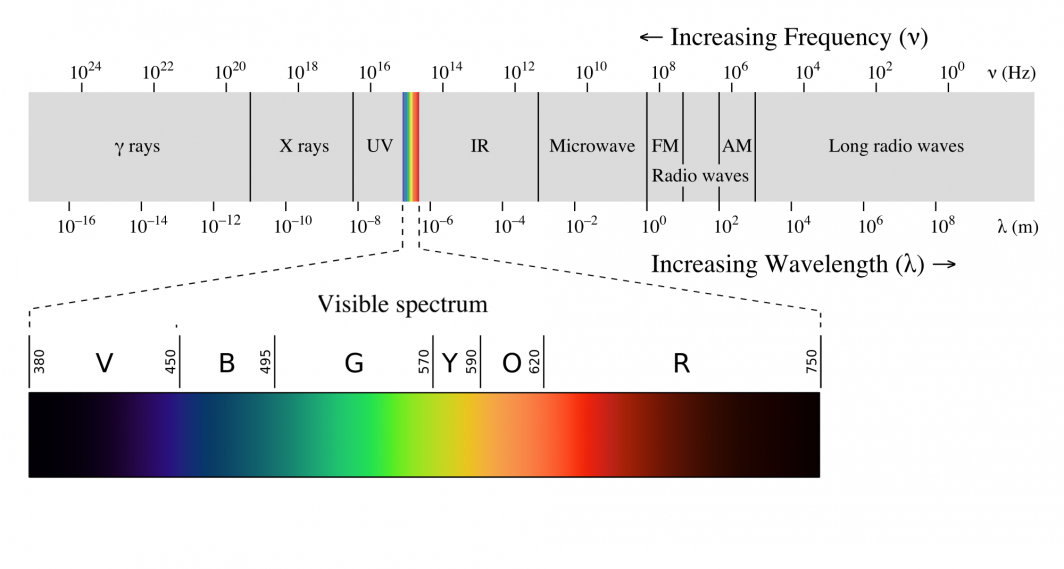 The complete electromagnetic spectrum. The only part of the spectrum people can see is the portion colored as a rainbow. Animals like insects and crustaceans can see other parts of the spectrum, like ultraviolet (UV) light.

“Electromagnetic spectrum revised” by Philip Ronan Gringer is licensed under CC by SA 3.0. 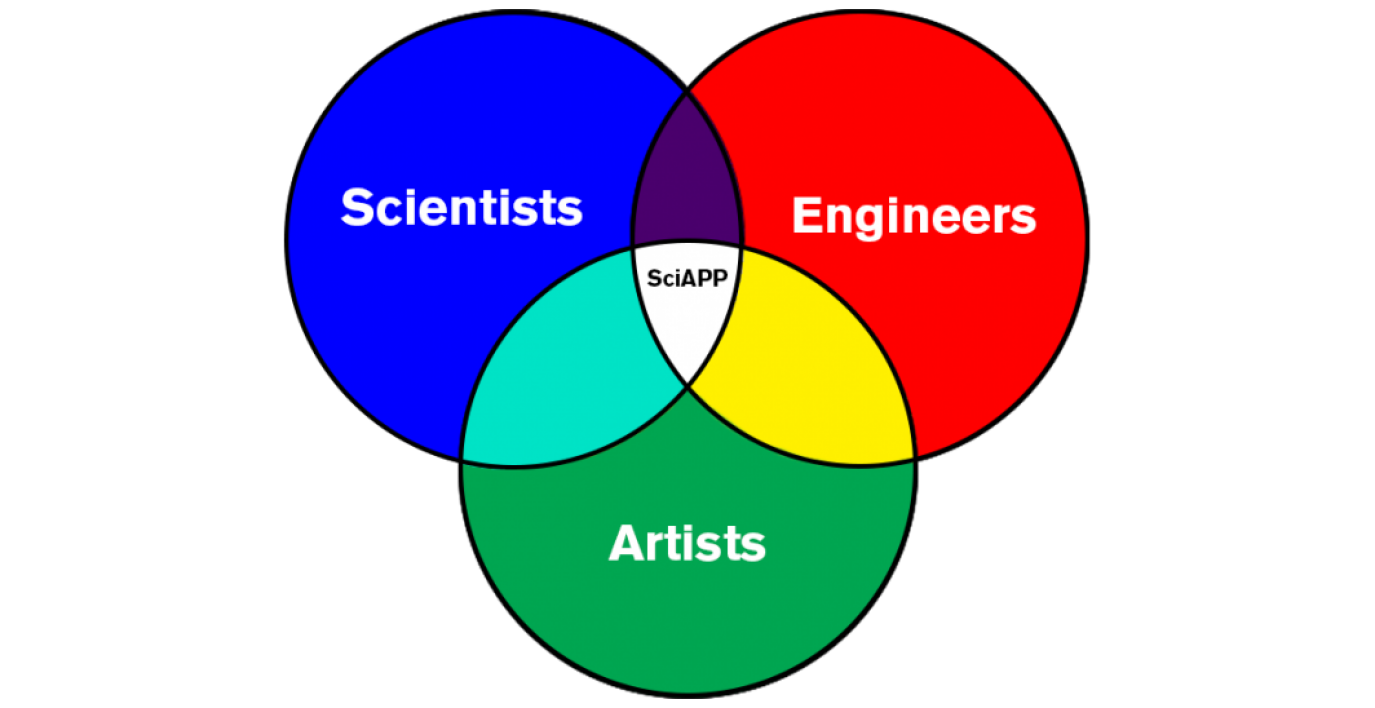 The human brain condenses the color information that arrives at our eyes into three dimensions: red, green and blue. Like an artist mixing paint to create new colors, the brain mixes the red, green and blue detected by the retinal cone cells into the different colors people see. SciAPP = artists + engineers + scientists. 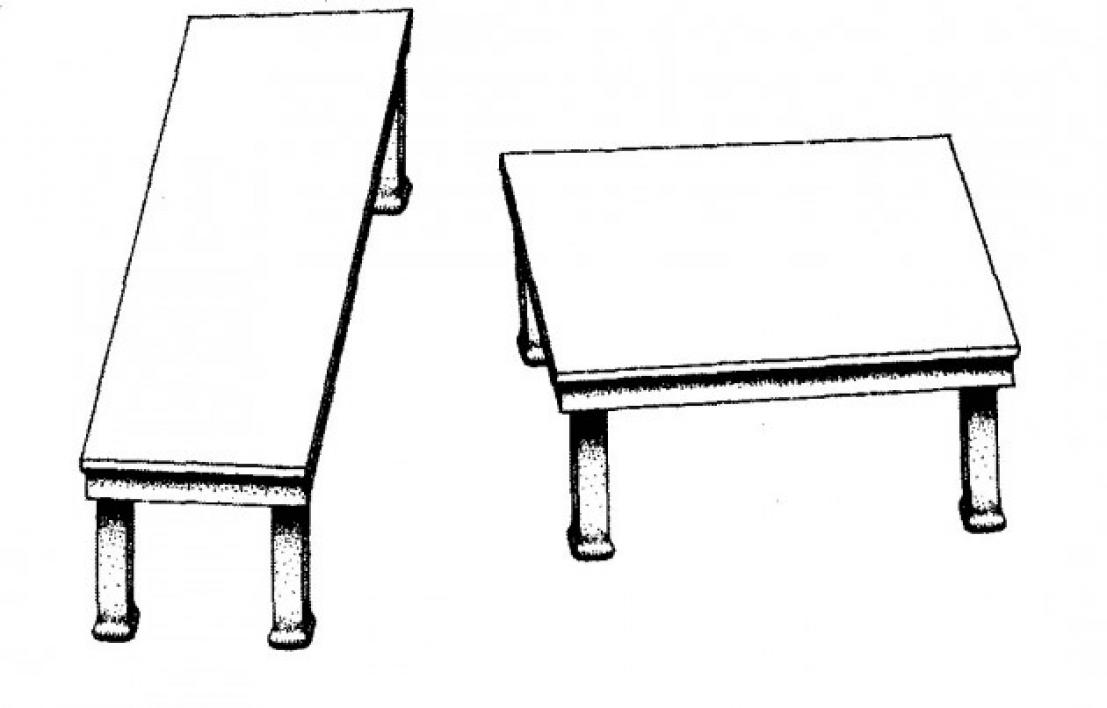 A drawing from cognitive psychologist and artist Roger Shepard that shows how imposing three-dimensional structure on two-dimensional shapes can lead to visual illusions. The table on the left looks longer than the one on the right, but the tables are actually the same shape and size.

Image credit: “Tables” by Roger Shepard is licensed under CC by SA 4.0.

All that we do not see

Elementary school students often learn the acronym “Roy G. Biv” to help them remember the colors of the rainbow, but when a prism spreads out a beam of sunlight the number of colors in the rainbow is far greater than seven. Human vision condenses the color information that comes into our eyes into three dimensions: red, green and blue. The red, green and blue dimensions correspond to the three types of retinal cells, called cones, in the back of the eye that detect color.

Like an artist mixing paint to create colors, the brain mixes the red, green and blue detected by the retinal cone cells into the different colors people see. Despite the sophistication of the human brain, people cannot tell the difference between the yellow that comes from sunlight separated by a prism and the yellow that comes from mixing versions of red and green together. And some people cannot see certain colors at all. These people are color blind because some of their retinal cone cells do not distinguish the red, green and blue dimensions.

Unlike the human eye, certain instruments commonly found in physics and engineering labs at ASU, called spectrometers, can tell the difference between the two versions of yellow and can detect the entire electromagnetic spectrum, not just visible light. Through SciHub, the scientists and students who operate these spectroscopic instruments are working on ways to help color blind people by adjusting the incoming electromagnetic spectrum to better match the receptors in their eyes.

“SciHub brings together people from science, engineering, art, machine learning, business and industrial design and also spans the educational spectrum,” Newman said. “We have a super team made up of prize-winning scientists, engineers and artists who work closely with graduate students, undergraduate students and high school students working on our projects.”

How we see the world can create illusions — and art

Condensing color information into red, green and blue is not the only way human vision changes incoming visual information. Because people live in a three-dimensional world, the brain automatically imposes 3D structures on everything people see. This constraint usually helps people to see the world accurately and faster but can also occasionally create visual illusions. Roger Shepard, one of the pioneers of cognitive psychology, studied visual and other illusions as a psychologist and an artist. Shepard is now the Ray Lyman Wilbur Professor Emeritus of Social Science at Stanford University, and his artwork, much of which is filled with visual illusions, will be featured at the SciAPP workshop on March 6.

In his 1990 book “Mind Sights,” Shepard wrote: “Without our bidding or even our awareness of its existence, (the nervous system) immediately goes to work on any visual input. … We cannot choose to see a drawing merely as what it is — a pattern of lines on a flat, two-dimensional space.”

One of Shepard’s most famous drawings of a visual illusion shows two tables that are placed perpendicular to each other. Because the brain imposes 3D structure on everything people see, the table on the left of the drawing looks longer than the one on the right. But, the two-dimensional images of the tables are in fact the exact same shape and size.

“We have a limited capacity to experience reality,” said Mike McBeath, a professor of psychology at ASU, one of the founders of the SAMBA group and part of the SciAPP organizing committee along with Wilczek and Newman. McBeath earned his doctorate from Stanford while working with Shepard. “Understanding how our perceptual systems filter the information coming in lets perception scientists, designers, artists and musicians ‘play games’ through visual and auditory illusions and also helps us develop new applications that expand and improve how we see or hear.”