Father and son duo create a legacy of scholarships at ASU

A sincere desire to invest in the next generation of construction trade contractors and luxury homebuilders has inspired a father and son duo to support Arizona State University’s Ira A. Fulton Schools of Engineering as a part of their legacy.

Jerry Meek and his son Jeremy, the president and vice president of Desert Star Construction (DSC) — a Scottsdale-based luxury homebuilding company — have initiated two scholarship funds for students in the Del E. Webb School of Construction, a part of the School of Sustainable Engineering and the Built Environment, one of the six Fulton Schools. The scholarships are helping efforts to revive the residential construction industry and advance Arizona’s luxury homebuilding market. 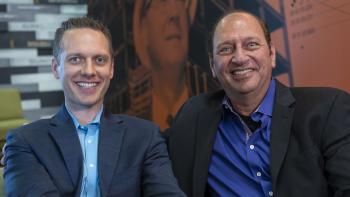 The Great Recession undoubtedly hampered the residential construction industry. More than a decade later, the industry has shown signs of recovery but a long-term talent shortage could still hinder its progress.

“There’s such a need for trades(people) to have education and grow,” said Jeremy Meek, who earned a bachelor’s degree in construction management from ASU and a master’s degree in sustainable development from the University of Cambridge in England. “We as builders and general contractors rely on qualified and competent trade contractors to complete the work that we do.”

As a native of Phoenix, Jeremy Meek takes pride in making dream homes come to life in the Arizona desert. He embodies ASU’s commitment to creating a more sustainable and resilient future by integrating green building and renewable energy practices into his projects. He believes the university is a major driver in the continued development of Arizona’s economic vitality. So, he invests back.

“Phoenix is an amazing place to be and there is a lot of growth coming,” he said. “We’re going to need a lot of qualified people to help make it happen.”

Jeremy Meek makes it his mission to stay involved as a member of the ASU President’s Club Young Leader program and occasionally a guest lecturer for the sustainability in construction course. Yet, he believed he could do more to support his alma mater and the industry that’s been a big part of his life since he was 9 years old and began cleaning up project sites for his father's business for a dollar an hour.

He decided to build an alliance with DSC’s local trade contractors to resolve the ongoing need for training in residential construction and increase the number of qualified college graduates to enter the homebuilding industry in Arizona and across the nation.

Jerry and Jeremy Meek led an initiative to garner support for an endowment to provide craftsmanship scholarships in perpetuity for construction management students who are enrolled in ASU’s Del E. Webb School of Construction.

DSC kicked off the initiative by providing a matching $40,000 contribution to the endowment in commemoration of the company’s 40th anniversary.

The endowment for the Team DSC Scholarship for Excellence in Craftsmanship raised more than $105,000 in just eight weeks.

The fund supports students who demonstrate a desire to work for a specialty contractor discipline, such as electrical, mechanical or plumbing, in custom luxury homebuilding or the broader residential homebuilding industry with a scholarship of approximately $5,000 each year.

For the next five years, DSC will also fund one $5,000 Excellence in Luxury Home Building Scholarship for a construction management student who wants to work in the luxury custom homebuilding industry. The scholarship was created to honor the family’s business and legacy.

“I love ASU,” said Jeremy Meek. “I had such an amazing experience. I appreciate and value those who funded the scholarships I received, so I see it as a way of giving back and investing in the future generations.”

Building a better future for the long term

Fernando Escobar and Trevor Williams, two construction management undergraduate students, benefited from the generosity of Jerry and Jeremy Meek as well as the founding trade sponsors of the endowment.

“I’m very grateful and thankful for receiving the scholarship from my donors at Desert Star Construction,” said Escobar. “I appreciate the financial burden they have helped me decrease.”

Escobar’s interest in construction started at a young age when he accompanied his father to job sites. In the future, he hopes to apply his education to work as a superintendent or project manager in custom homes or multi-family home construction.

Similarly, Williams has always been interested in construction. He grew up with a passion for building and working with his hands. After college, he wants to be a custom home general contractor.

“It means a lot to me that someone would provide the way for me to work hard with less stress,” said Williams. “I have a wife and two kids I provide for and it takes a lot of stress off my shoulders knowing, at least for these past two semesters, I haven’t had to pay for school.”

The scholarship recipients will have the opportunity to meet Jerry and Jeremy Meek at the Fulton Schools Donor Appreciation Breakfast on Wednesday, Feb. 27 at the Memorial Union on the Tempe campus.

“It’s important to know that no one succeeds in life on their own,” said Jerry Meek. “It takes participation from everybody. For us to be able to have an opportunity to support the emerging talent in our industry, that’s the benefit. ... You make a living by what you get and a life by what you give away. For us, it was important that ASU was part of our legacy as a family and our business.”

ASU student building a community of black artists and leaders

The revolution will not be televised, but it might very well be sold.Arizona State University digital culture major Sekou Jackson points out the broken TV he painted on a bulletproof vest, a piece of art and activism that also features a globe on fire, a grave with a pile of money on it and the text “You cannot capitalize my skin, oppression or even this vest.”The vest is just one statement am...

ASU student building a community of black artists and leaders

The revolution will not be televised, but it might very well be sold.

Arizona State University digital culture major Sekou Jackson points out the broken TV he painted on a bulletproof vest, a piece of art and activism that also features a globe on fire, a grave with a pile of money on it and the text “You cannot capitalize my skin, oppression or even this vest.” 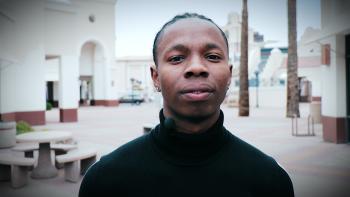 The vest is just one statement among many in Jackon’s holistic skillset as an artist. He addresses everything from co-opting revolutionary action for profit (such as selling a T-shirt featuring revolutionary language) to police brutality to consumerism and so much more, using media as diverse as stop-motion animation, drawing and spoken word.

Whether he’s giving an impromptu speaking performance in front of the MU or making a visual piece like the vest, he wants to debunk racial myths, raise awareness and lift people up.

“Anything I do … I just want to put it out (into) the world where people can benefit from it,” said Jackson, a sophomore in ASU’s Herberger Institute for Design and the Arts.

Jackson is dedicated to creating community and opportunities for black artists at ASU to showcase their revolutionary spirit and connect with each other to share resources, develop leadership skills and amplify their impact as community members.

“You can’t change the world as one person,” said Jackson. “You need a collective.”

Jackson points to artists such as Aaron McGruder, the cartoonist behind "The Boondocks," as an inspiration. "The Boondocks" tackled racial and political issues in newspaper comics from 1999 to 2006 that still resonate today, said Jackson.

Like the protagonist in "The Boondocks," Jackson moved away from a familiar community. Raised on Long Island and in Washington, D.C., Jackson decided to come to ASU to thrust himself into a new environment and make his mark.

Jackson is doing just that with a new student organization he is starting in the fall: Black Leaders, Artists and Creatives Society. The group will foster networking, support and community around creatives who want to be artistic leaders.

By connecting artwork to the activism of racial and economic equality, Jackson hopes to effect change that will improve his community.

“The world itself can change from just people helping each other or sharing ideas,” he said.

This story is part of an ASU Student Life series about ASU students who are making a difference in their own communities leading up to the Change the World showcase and competition at 5 p.m. on March 27, 2019, at Sun Devil Stadium. Students can register through Feb. 28 to be part of the showcase as a live performer, artist or competitor in the pitch competition. All students, faculty and staff are welcome to attend the event, which is free and open to the public.